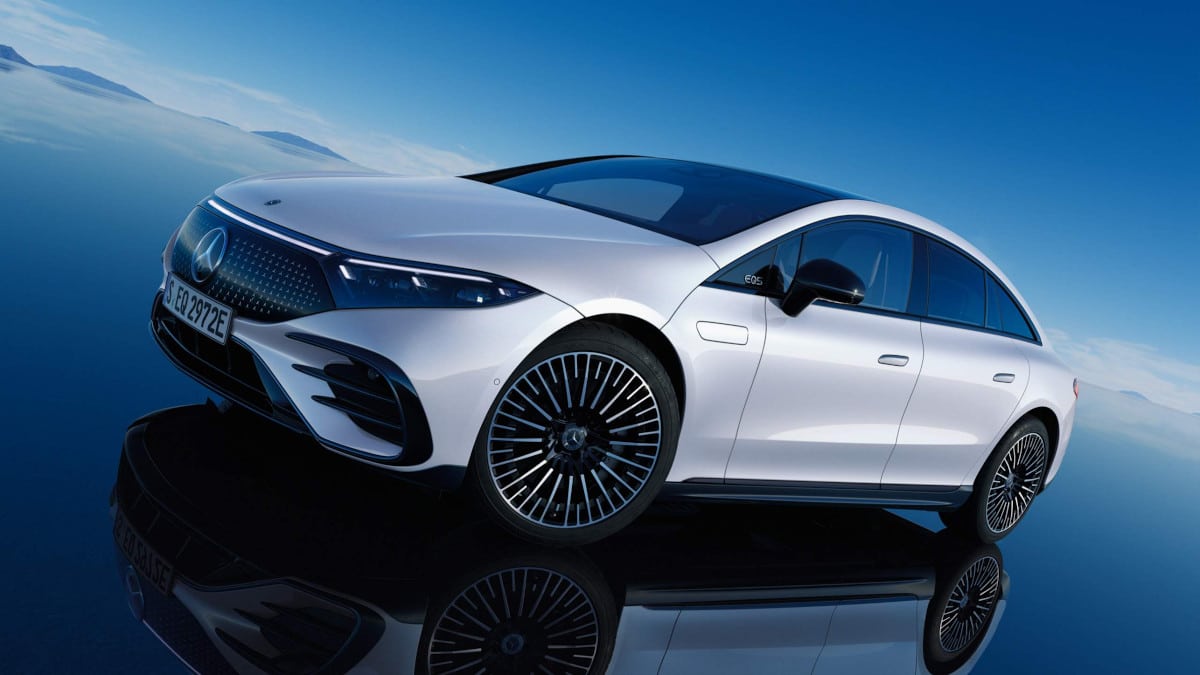 Mercedes-Benz made the EQS official on March 15, 2021. This new 100% electric sedan is the close cousin of the new S-Class and is intended to compete with the Tesla Model S Long Range. The motor power can reach 385 kW. The battery capacity is 107.8 kWh. The maximum speed is 210 km / h. And the range can go up to 770 kilometers.

Mercedes-Benz recently announced its plan to electrify its fleet. The goal of the German brand, the bridgehead of the Daimler group, is to achieve by 2030 a balance of sales between thermal and electric (100% or plug-in hybrid). For this, we must offer neutral models in CO2 emissions. Yesterday, Thursday, April 15, 2021, the automaker unveiled the EQS, its new all-electric car. This is a top-of-the-range sedan whose ambition is to compete with the Tesla Model S Long Range and its range of 650 kilometers.

For this, Mercedes promises an autonomy that can reach 770 kilometers (WLTP standard). That sounds very ambitious, even for a sedan. Of course, this will depend on the driving mode, the active equipment in the car, the load, not to mention the engine power. But not only. In addition to the nominal capacity of the battery, which is quite large since it reaches the 107.8 kWh (a capacity obtained thanks to 26% improvement in energy density compared to the EQC), the brand says it achieved this figure thanks to the aerodynamics of the car, significantly reducing friction, as well as more efficient energy recovery during deceleration. 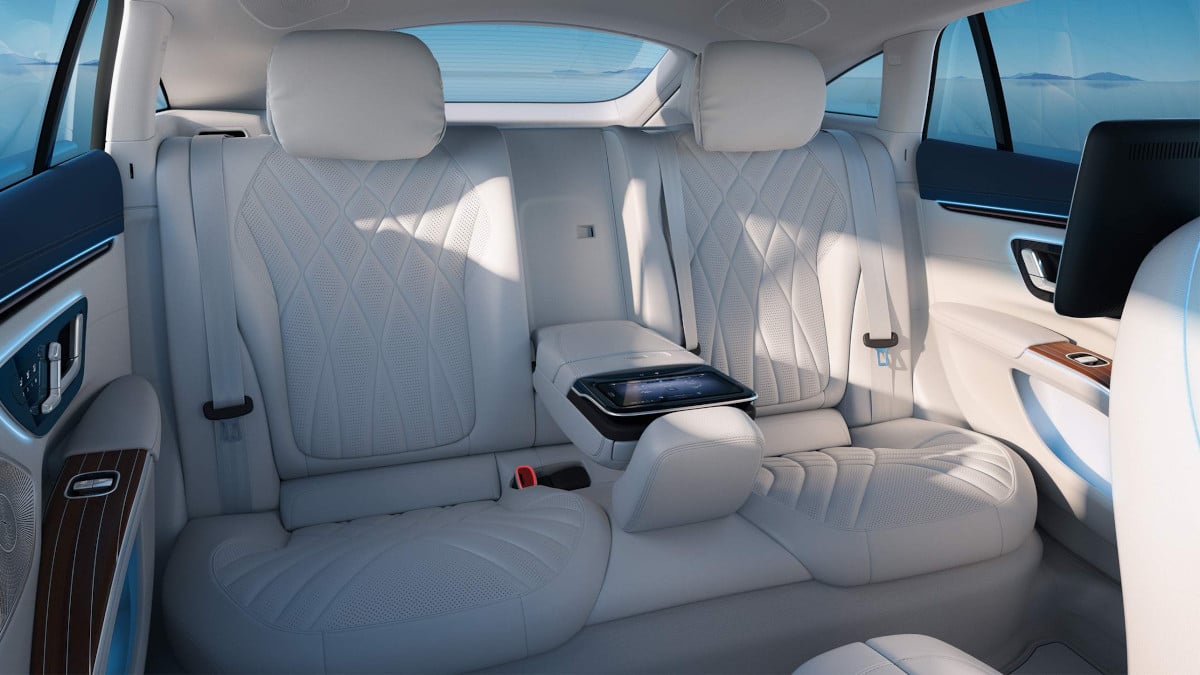 A (almost) complete recharge in 31 minutes

For recharging, the EQS of course takes advantage of fast recharging. On a compatible terminal (400 volts and 500 amps, or 200 kW, the car does not accept a higher power), the car battery is 10% to 80% charge in 31 minutes. Good performance considering the battery capacity. On this type of terminal, you can obtain up to 300 kilometers of range in 15 minutes of charging. The car comes with an 11 kW charger as standard. With this one you can charge the car from 10% to 100% in 10 hours. Mercedes offers an optional 22-watt charger that simply halves this time. Finally, to finish on charging, the EQS will be bi-directional charging compatible, but only in Japan at first. 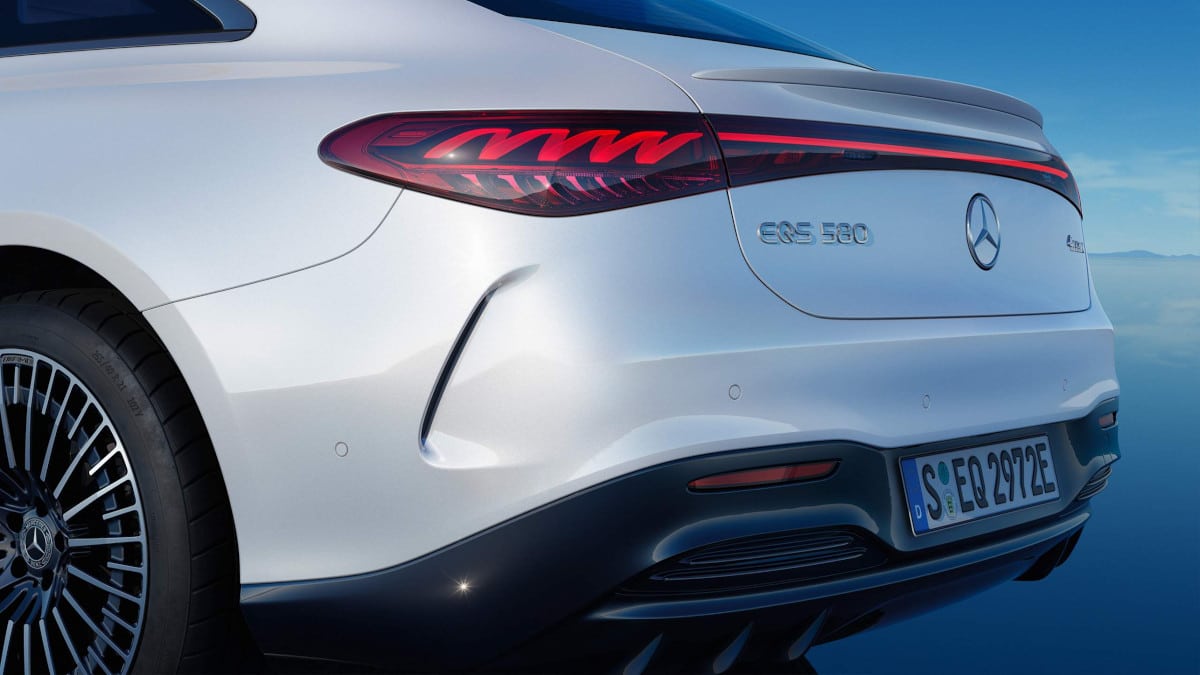 The range of the car will obviously depend on the power of the engine, but also on the transmission. The EQS is initially available in two models: EQS 450+ and EQS 580 4Matic. The first is rear-wheel drive (electric drive train on the rear axle), while the second benefits from all-wheel drive. The EQS 450+ has an electric motor of 245 kW, offering a fairly good acceleration (6.2 seconds are needed to go from 0 to 100 km / h). The EQS 580 incorporates a 385 kW. The acceleration is obviously better: 4.3 seconds to go from 0 to 100 km / h. Note that the maximum speed for both cars is limited to 210 km / h. Finally, Mercedes-Benz promises the arrival of a model with a 560 kW engine, with no launch date.

A dashboard that goes from one door to another

Aesthetically, the EQS largely takes the design of the new S-Class, of which this electric sedan is a close cousin. This is especially the case when you look at the grille of the car that Mercedes-Benz calls ” Black Panel “. You will find the LEDs for the headlights of course, but also other light elements, including a strip that connects the two ignition systems. Inside, you will find multimedia and interactive equipment. The main screen measures 12.4 inch and offers all the controls on the car. As an option, you can also opt for the Hyperscreen, which combines three curved screens (including the main screen seen above), the assembly of which forms the link between the two front doors. It is very impressive. 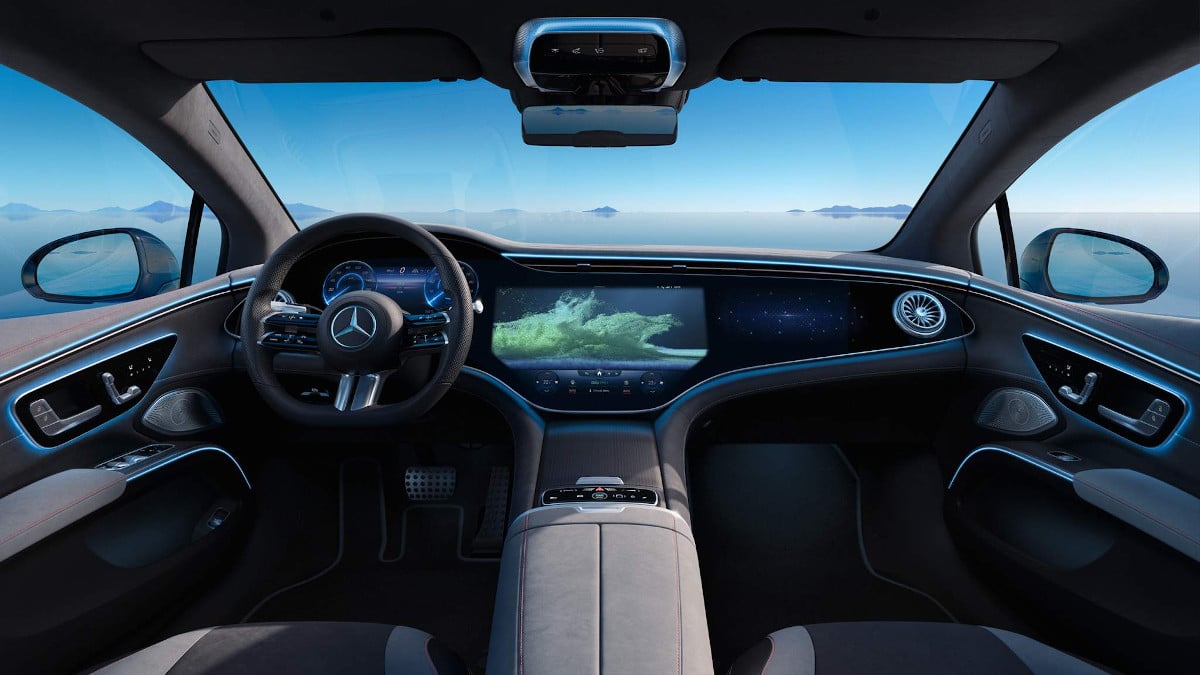 Among the driving options integrated into the on-board computer, you will of course find all the aids expected in this type of vehicle. Among those that caught our attention, you will find automatic door opening, remote parking assistance using your smartphone, autonomous driving in heavy traffic (up to 60 km / h), or aids to keep the driver’s attention. We noted two: the one that turns off the passenger screen if the driver is looking at it (option activated depending on the type of content displayed) and the one that wakes the driver up if he blinks too often (a sign of fatigue). Some are in series. Others are optional.

The price and release date of this new car have not been disclosed by the manufacturer.