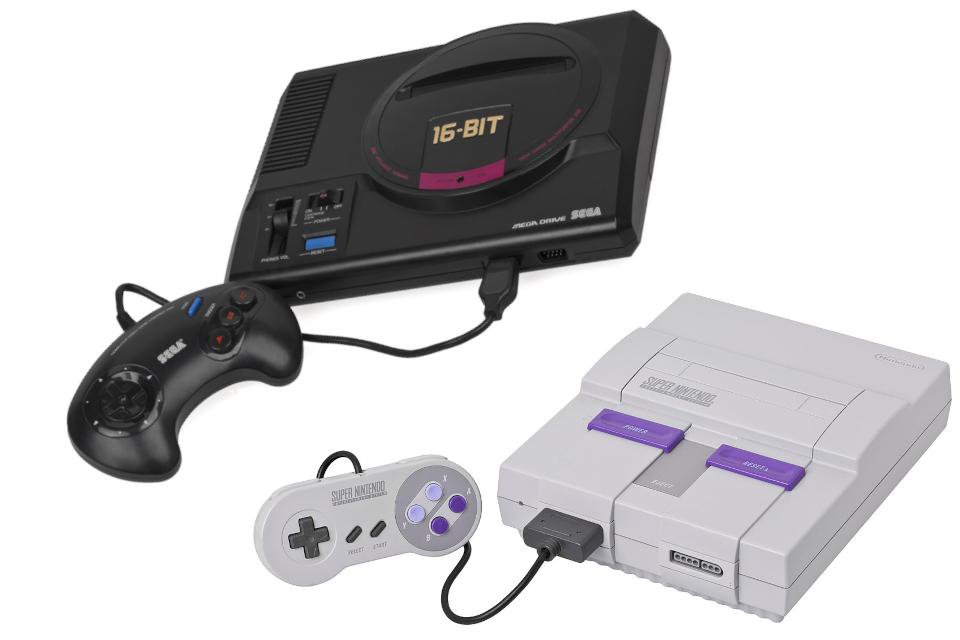 The 1990s were the absolute reign of Sega’s Mega Drive (or Genesis in the US) video games and the Super Nintendo Entertainment System (SNES), both Japanese companies that revolutionized the international market and drew a legion of fans.

Those who lived through the heyday of the two consoles, for sure, participated in warm conversations at school, work or college about which video game was the best. Each video game had its fervent followers who extolled the advantages of each. 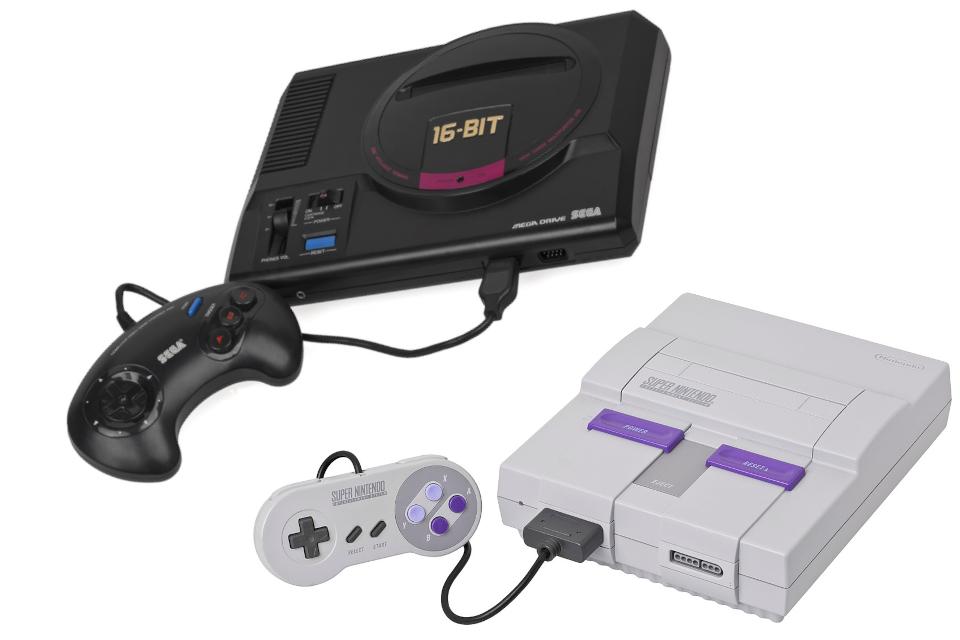 The Mega Drive, released in 1988, created a new generation of video games with game cartridges, redesigned controls and especially new colors, graphics and sounds. This was Sega’s third console (after the SG1000 and the Master System), which developed its own arcade board, the System 16, which brought together important titles released in arcades.

Soon after, in 1990, Nintendo released an upgrade of its 8-bit console to compete in the 16-bit market. The SNES featured more advanced graphics and sounds for consoles at the time. With its Super FX chip, the company pioneered the use of 3D images in games and the use of buttons on the edges and in the center of the controller.

The dominance of the two consoles only ended with the arrival of another Japanese console, the Playstation launched by Sony in 1994. Even so, the clash between Mega Drive and Super Nintendo remains the biggest in the history of video games. Check out the strengths of each console! 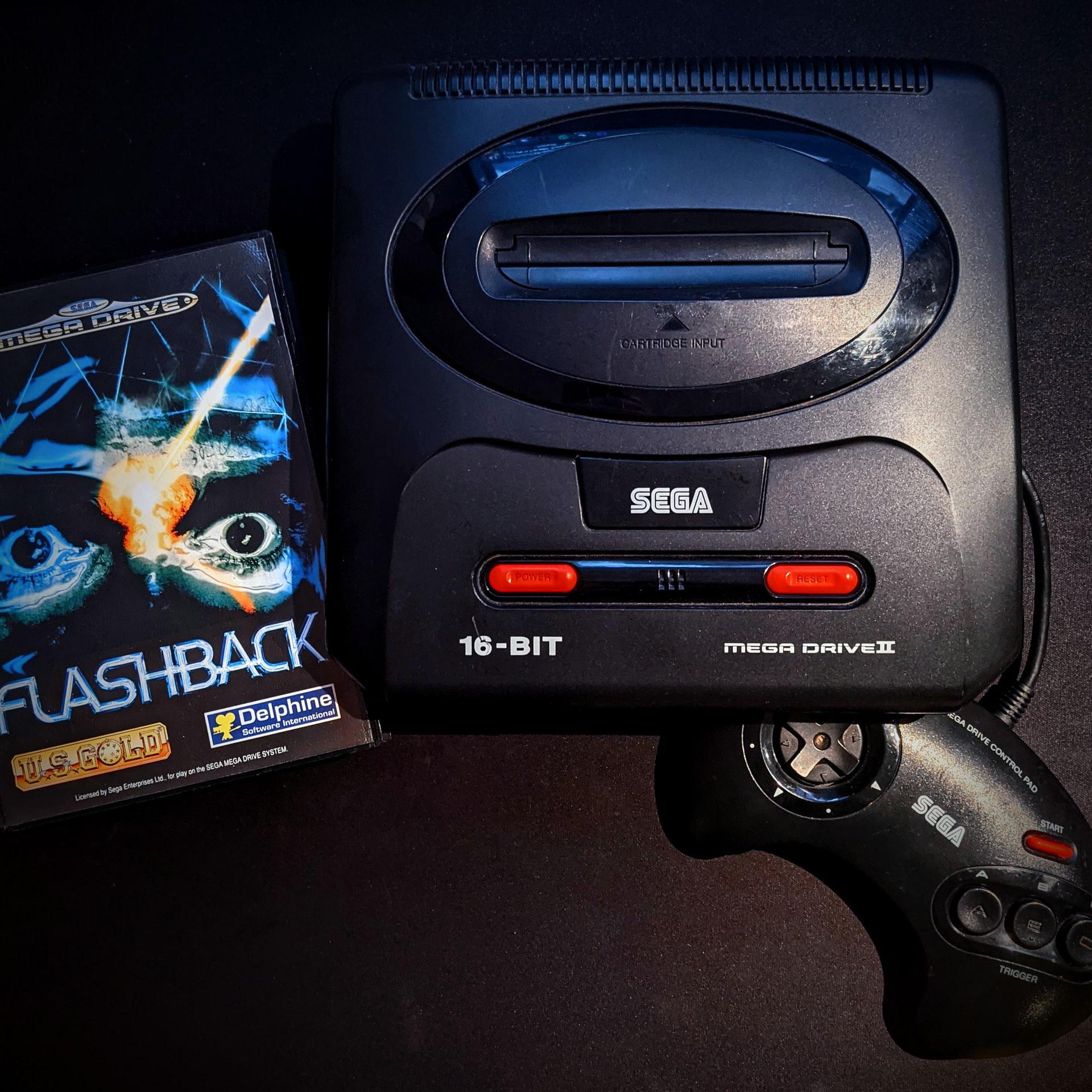 Sega chose to create a modern-looking piece of art that fit well with their aggressive marketing campaign. The Mega Drive was the console for adults, college students or older children, standing out from the competition, which aimed at a younger audience.

The sleek black curves made the video game look like a piece of ’80s stereo equipment, especially with its front-mounted volume slider and headphone jack. The console came to have three versions, which rounded off the look (and only the first two had inputs to couple the SEGA CD and the 32X).

The design of the Super Nintendo is a stark contrast to that of the Mega Drive. Instead of focusing on rounded edges and a sleek look, Nintendo opted to release a gray and purple square box with rectangular buttons. The Super Nintendo looks less like a serious electronic piece and more like a toy. The console even had a second version, dubbed here as “Baby”, which had a more rounded design. 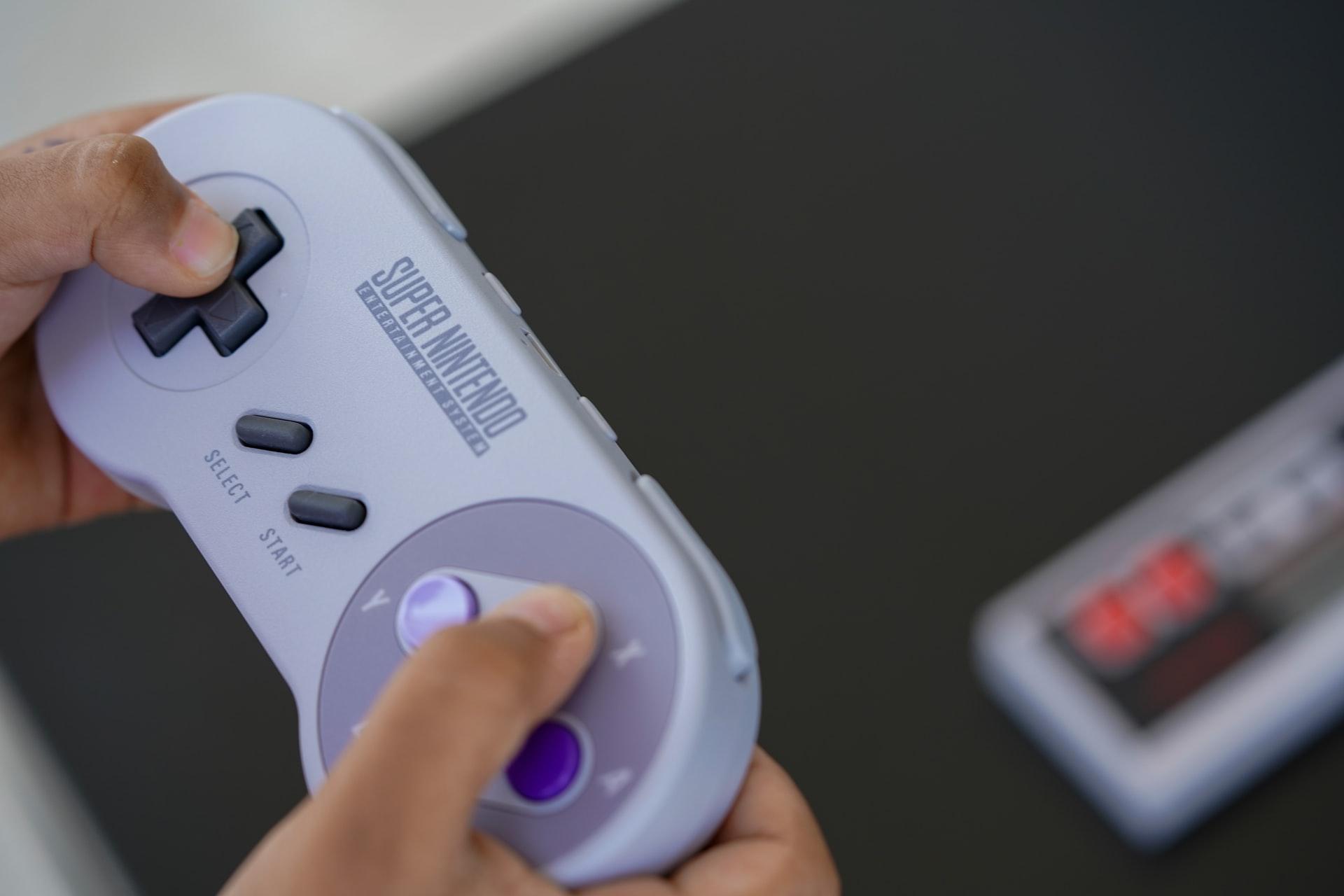 The Mega Drive debuted with a larger-than-typical controller, with three primary buttons in a row labeled A, B, and C triggers, with a start button offset.

On the other hand, Nintendo nailed it with its controller, which was gray and purple, matching the console’s aesthetic. The four main buttons were arranged in a cross, stylized to look out of place. In addition, there were Start and Select buttons in the middle and two shoulder buttons.

As a testament to its design, nearly all modern controllers are built on the framework that Nintendo created in 1991, with just a few minor evolutionary tweaks. On the other hand, the Mega Drive’s six-button control would have its design kept in several specialized joysticks for fighting games. 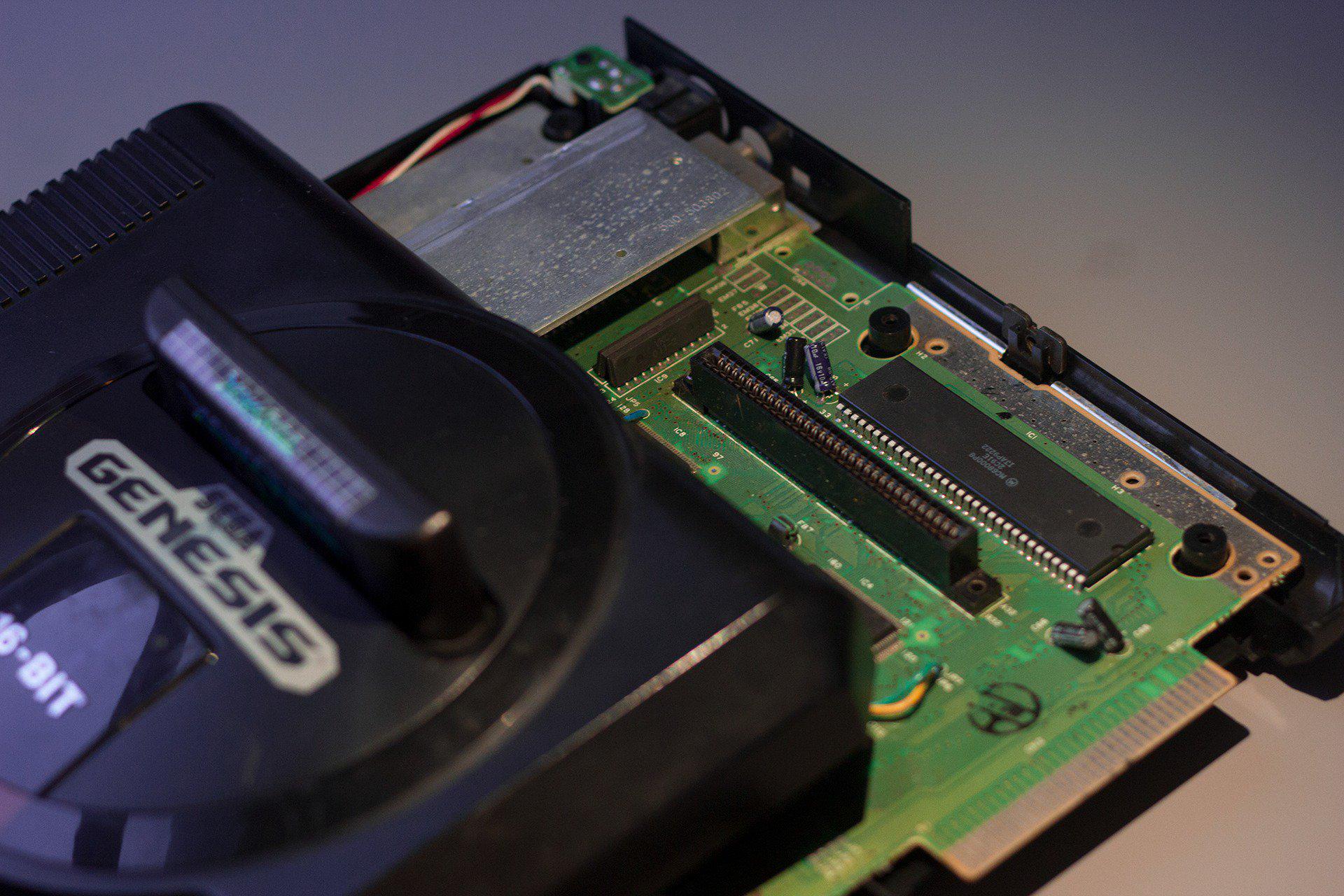 However, the idea of ​​simply comparing CPU clock rates to determine performance irrespective of other characteristics is commonly known as the megahertz myth.

The faster performance of the Motorola 68000 essentially comes from a wider data bus as it is a 16/32-bit hybrid CPU, while the S-CPU is an 8/16-bit hybrid CPU. 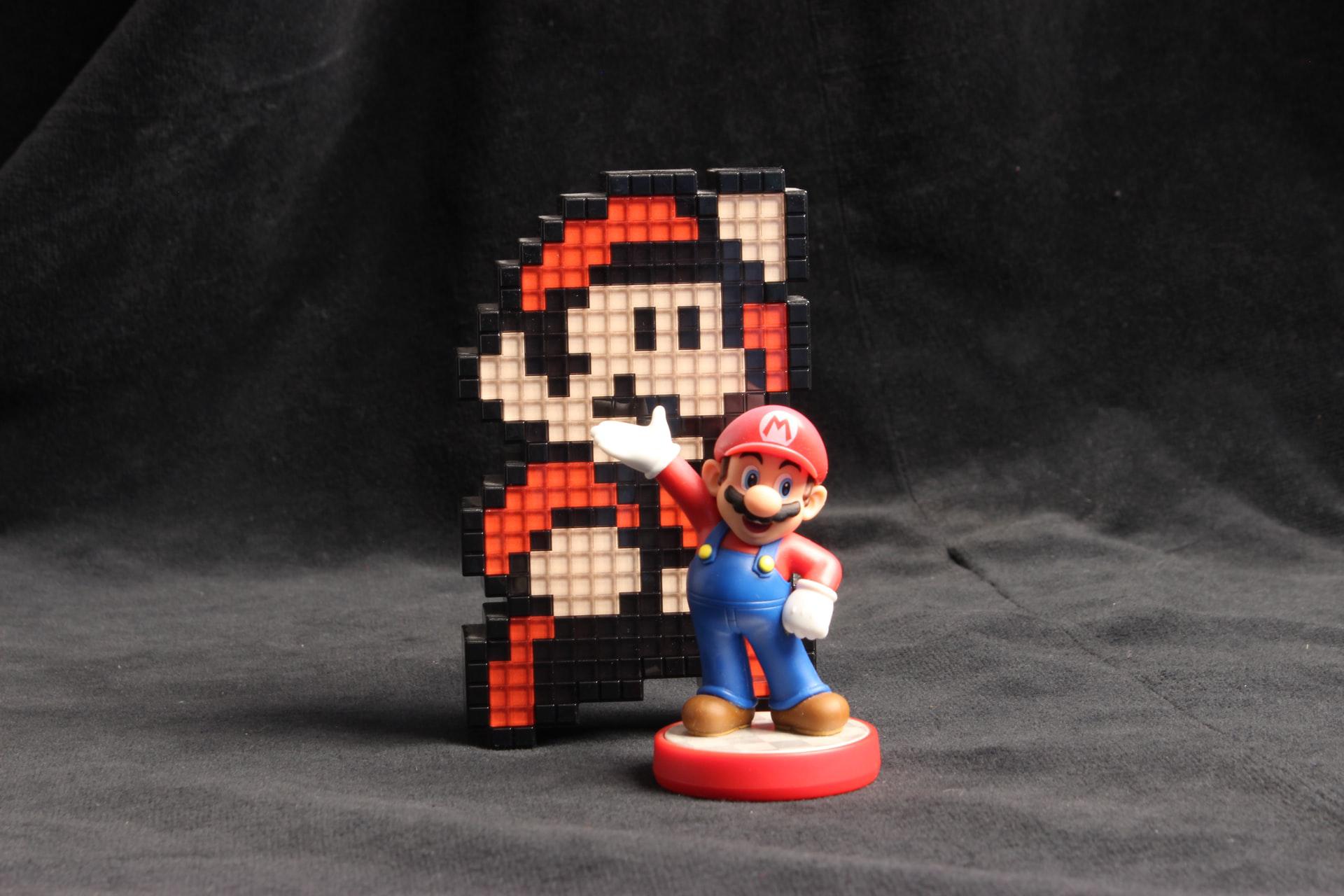 The Mega Drive has higher memory bandwidth and is capable of faster DMA transfer rates, giving it faster performance than the SNES. This also helped give the console higher game resolution, fast data blitting, and a high frame rate with lots of moving objects on the screen.

In comparison, the Super Nintendo’s DMA unit is part of its S-CPU processor, while its graphics chips lack the feature. However, SNES chips come with more graphics hardware built in, such as more on-screen colors, larger sprites, and background scaling. In addition, some Super Nintendo cartridges contained SuperFX, an additional graphics chip that provided greater power when rendering certain elements, as we saw in StarFox e Super Mario World 2: Yoshi’s Island.

One aspect of the SNES hardware that Sega couldn’t replicate with DMA is its color palette. DMA programming techniques allow only 256 colors to be reproduced, which doesn’t come close to the SNES’s 32,768 selectable color palette.

The Mega Drive’s audio hardware includes a sound CPU, the Zilog Z80, along with two sound chips, the Yamaha YM2612 and the Sega PSG, both located on the same Sega integrated circuit. The Super Nintendo’s audio processing unit, the Sony S-SMP, includes an audio CPU, the Sony SPC700, and a DSP sound chip, the S-DSP.

The Mega Drive’s Z80 audio CPU has more than three times the clock rate of the Super Nintendo’s SPC700 audio CPU. However, the SPC700 requires fewer cycles per instruction, so the Z80 is only slightly faster for most operations.

What gives the Z80 a significant performance advantage, however, is direct access to the 68000 processor’s memory, as well as its own internal 8KB sound RAM, allowing it to stream data directly from the ROM cartridge at a higher speed than the SNES.

The Mega Drive’s YM2612 sound chip has a 53 kHz sound output, higher than the Super Nintendo’s S-DSP which has a 32 kHz output, giving the YM2612 a wider frequency range.

Nintendo sold 49.1 million Super NES consoles over the course of the generation, a result that represents almost double the Mega Drive, which placed 29 million units on the market. In the previous generation, Sega was decimated by Nintendo, with the Master System selling 13 million versus 62 million for the NES.

Sega’s sales were concentrated in the Americas, which had more than half of global sales, with success also in Europe. However, it failed to gain traction in Japan, despite the company’s reputation as an arcade giant.

In the US, Sega launched aggressive marketing, calling Nintendo by name in the famous “What Nintendon’t” campaign.

The best performance of the Mega Drive was guaranteed by the Sonic the Hedgehog, released in 1991, which became a mascot for the company, just as Mario was for Nintendo. the first game of Sonic sold over four million units. The 1992 sequel surpassed with six million units.

In 1992, Sega had a 55% share, but lost ground when it started dividing its audience with add-ons like the SEGA CD and 32X, while Nintendo continued to produce games for its loyal fans, the battle was won.

Despite the success of Sonicthe Mega Drive cartridge sold two million units less than the Donkey Kong Country, the best-selling game on the Super NES. Nintendo had more bestsellers than Sega. After Sonic the Hedgehog 2, the next best seller was Aladdinwhich also handled about four million units.