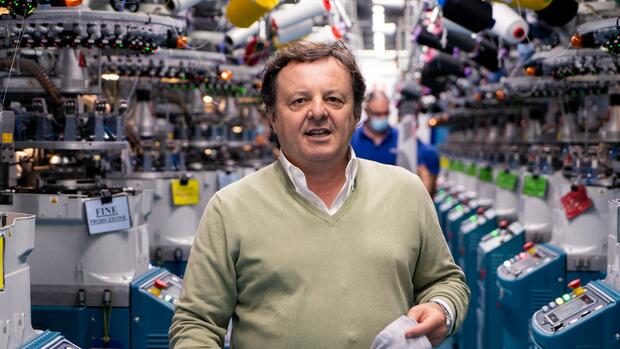 Munich Marco Redini was just waiting for Europe to come back to life after the corona crisis. Because now the owner of the Italian sports company Trerè Innovation can finally sell his first shoe collection. The 55-year-old is delivering 75,000 pairs to stores across the continent these days.

Just as Adi Dassler once started in Herzogenaurach to turn the world of sport with his Adidas soccer shoes, Redini now wants to revolutionize the industry with knitted sneakers.

For the entrepreneur from Asola, a few kilometers south of Lake Garda, they are “the most technologically advanced shoes that have ever been developed”. Sole and upper are connected like no other sneaker, the shoes are ecological, because they are made of merino wool, and would be clean again in the washing machine.

It is not a matter of course that Redini is going full steam ahead these days. His company is based in Lombardy, the region in northern Italy that was devastated by the corona virus. However, its operation was only suspended for a few days during the curfew. When the pandemic paralyzed the whole country, the patron quickly switched its manufacturing to masks. To date, he has produced more than two million pieces.

But that’s not all: Redini had just the right products on offer for the long weeks of lockdown. With his Uyn brand, he produces, among other things, running clothing that is in high demand this spring. The gyms were closed everywhere, but jogging was permitted in many places. He now also offers shoes under the “Uyn” label. It speaks like the English “Win”.

With Titici, in turn, he owns an Italian manufacturer of custom-made bikes. Redini claims they are being torn from his hands; just like the cycling shirts and shorts that he sells under the name “For.Bicy”.

The business is growing rapidly

The business grew significantly in May and now also in June compared to the previous year. And the prospects are brilliant: “It will be a super year,” emphasizes Redini. Not many Italian entrepreneurs are likely to say that at the moment. Because the pandemic is leaving deep traces in the economy. The EU Commission estimates that the country’s gross domestic product will shrink by 9.5 percent in 2020; only Greece is worse off in the community.

Redini’s sales are expected to increase to just under 110 million euros this year. In addition to his own brands, the merchant also produces and develops for other groups. The customer list ranges from the sports discounter Decathlon to the luxury label Prada. For example, Redini maintains two clothing manufacturing sites in Bosnia.

The family company with around 1000 employees is a good 70 years old. Redini himself got involved more than 30 years ago. Last but not least, the company lived from producing socks and textiles for X-Bionic, a medium-sized company based in Switzerland. The partnership ended in 2018. At the same time, Redini created the Uyn brand.

Nevertheless, it is currently not a sure-fire success to launch new products on the market. Because at many retailers, the goods stack because they had to close for several weeks. “In contrast to the fashion industry, sport is fortunately not that difficult,” says Stefan Herzog, general secretary in the Association of German Sports Retailers. After all, many collections are rather timeless.

Nevertheless, the shopkeepers and the sports brands are under pressure. Herzog: “The discounts are massive.” It is also not to be expected that customers will storm the shops in the next few weeks. “There is no catch-up wave,” warns Herzog.

After all, Redini’s new sneakers have already caused a sensation in the industry. At the Ispo sports fair, the line was chosen as the best new product in the fitness area at the beginning of the year. In recent years, the innovations were more likely to be found in the soles, judged the jury.

For example, the Swiss start-up On managed to conquer the sports shops worldwide with exceptional soles. At Uyn, the experts now particularly praised the upper, which provides fresh air in the shoe, but also protects against moisture and is also comfortable.

An academy for young people

Corona or not, the avid skier Redini continues to pursue his expansion plans. The new shoes are just one project among many. The entrepreneur is currently in the process of establishing a junior academy. In the future, he plans to accommodate more than 100 students on his campus for six months each.

To this end, he has teamed up with the universities of Bologna and Verona, among others. They are supposed to search for talent worldwide. That will cost almost two million euros a year. Redini still thinks it makes sense. “If I don’t do that, how can I find the best people?” The entrepreneur wants to invite textile engineers as well as young social media specialists. Because: “Today, it’s not just the product that is important, but also communication.”

At the same time, he is expanding the production of carbon wheels in Italy. So far, he can build 500 units a year, and in future there will be as many in the month. “The demand is much, much greater than we can serve,” said Redini. In August he also wants to present a new e-bike model, which he is putting in the shop window together with Shimano for 7,500 euros.

In the meantime, the Italians are also allowed to travel again, and so the busy family father set off again for Bosnia this week. He wants to invest in shoe production in the Balkans. So far, all of his models have been made in Italy. Therefore, the cheapest variant costs an impressive 99 euros. This is significantly more than Adidas or Nike demand in the entry price ranges. Bosnia is more attractive as a production location: “It’s like in Italy, only cheaper.”

As if that weren’t enough, Redini is opening five new stores in major Italian cities. From September to January, he also plans to operate a pop-up store in Paris. The Italian is not a dreamer, however. He knows very well that the virus could thwart his plans. The new Corona outbreak in Beijing is a warning, says Redini. In the growth market of China, of all things, its sales are 60 percent below the previous year.