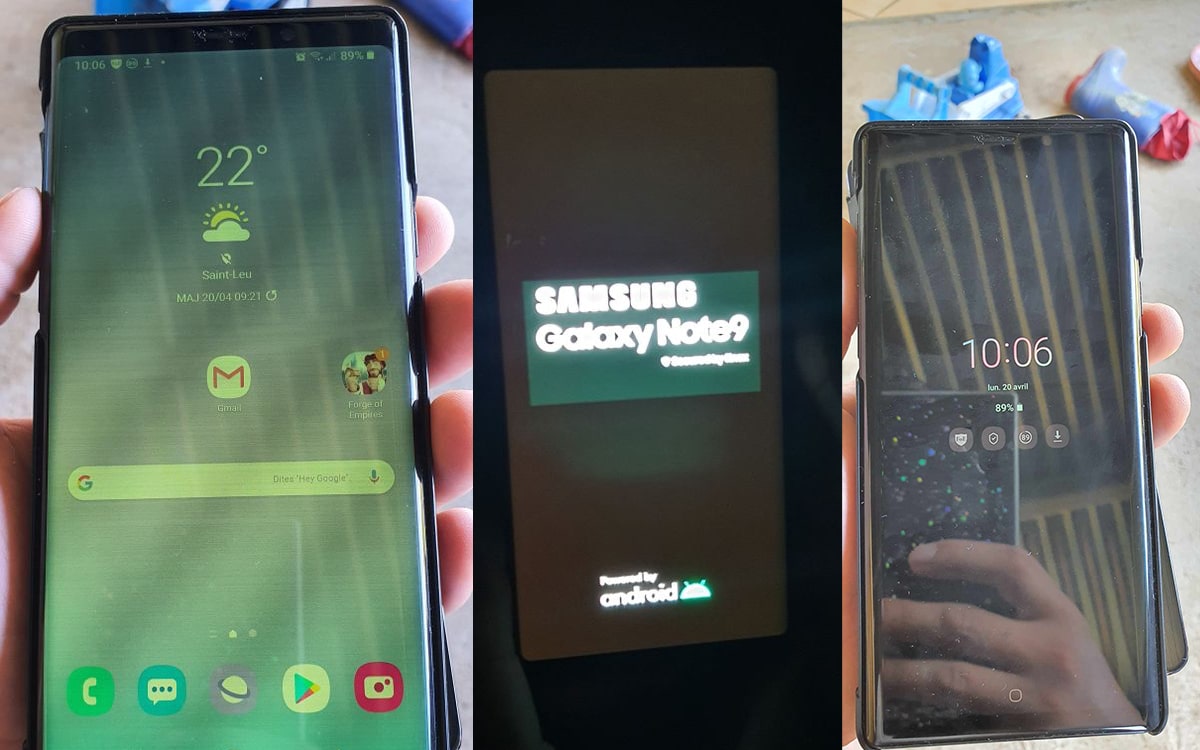 Many Galaxy S9, S9 +, S10, or S20 + users experience an issue with the touchscreen of their Samsung smartphone. Supporting videos and photos, testimonials affirm in particular that the AMOLED panel flashes, turns yellow or displays black and white bands. On the brand’s official forums, they point to an update.

For several months, users of a Galaxy S9, Galaxy S9 +, Galaxy S10 or Galaxy S20 + have noticed intermittent display problems. We were also contacted by a reader who noticed screen problems on his Galaxy S9. “When I updated my Samsung Galaxy S9 in August 2020, it looked like the screen turned ‘yellowish’, washed out or discolored” testifies the reader. We noticed similar issues on our Galaxy S9 +.

On the official Samsung forums, there is no shortage of testimonials going in the same direction. A Telegram group dedicated to the problem, and comprising nearly 2000 members, has even been opened. “There is sometimes a kind of blue-green filter, like when we put the blue filter but it is not the same shade. When this happens, often my screen ends up turning black, a little flashing, with bands horizontal white and black on the top ” explains a user. Most of the testimonies come from France, the United States, India and Malaysia.

“When my phone is locked, screen off, if I unlock it normally (with fingerprints, Iris…) my screen lights up but has a display bug (yellow screen)” A user advances a Note 9. The bugs noticed by users are very varied. For some, the AMOLED touchscreen sometimes turns blue-green, yellow, blinks, turns black, blinks for a few seconds, or shows horizontal lines.

On the same topic: Galaxy S20 FE – Samsung still did not fix screen bugs after 3 updates

The first testimonies appeared around the month of february. For many users, the screen bugs started right after installing an update. Some believe that it was the update to Android 10 that caused the display to malfunction. “Since the update to Android 10 (update done for a month or two) I noticed that my screen bug” underlines a surfer. After investigating the forums, it seems rather that the first testimonies have multiplied after the update of March 2020.

In the past, a software problem has already caused the screens of certain Samsung devices, Note 20 Ultra and Tab S7, to turn green. It is therefore not impossible that the problem is the consequence of an update. This green screen problem isn’t just for Samsung-designed smartphones. Many flagships released in recent years have encountered similar failures. This is particularly the case with the iPhone 11 following an unlocking bug, the OnePlus 8 Pro, the Pixel 4 or even the Mate 20 Pro.

Despite updates and patches rolled out by Samsung, screen bugs still appear intermittently. To correct the problem, many of them have reset their smartphone, cleared the cache or restored it to factory settings. Without success. To avoid daily failures, Internet users offer several of the workarounds. For some, keeping the Always-On screen on all the time helps prevent bugs. Indeed, the problems encountered occur in most cases just after unlocking the smartphone. Unfortunately, this trick does not work for all users.

Rather an overheating problem?

On Reddit and Telegram, users are starting to suspect an overheating problem. Following a software bug, some smartphones have indeed started to heat up abnormally. Several users believe that the overheating may have damaged the AMOLED panel, causing abnormal reactions. “The cause has also been found, an ‘overheating’ would have caused this irreversible damage on the screen, all this from the famous update” advance the user who contacted us. Similar concerns have already appeared on smartphones sold by competing manufacturers after overheating. This track is therefore not to be excluded.

This is not the first time that users have complained of a bug with the OLED screen of the Galaxy S9. Only a few weeks after the release, users claimed that the screen was not displaying correctly. At first glance, this failure is not related to the problems encountered over the past few months.

For now, Samsung has yet to react to the numerous testimonials appeared on its forums. Fortunately, some users have managed to obtain a replacement unit from an authorized Samsung center. Other aggrieved buyers claim that the brand is turning a deaf ear to their grievances as the warranty period has expired. Have you encountered similar issues with your smartphone? We invite you to share your testimony in the comments below.