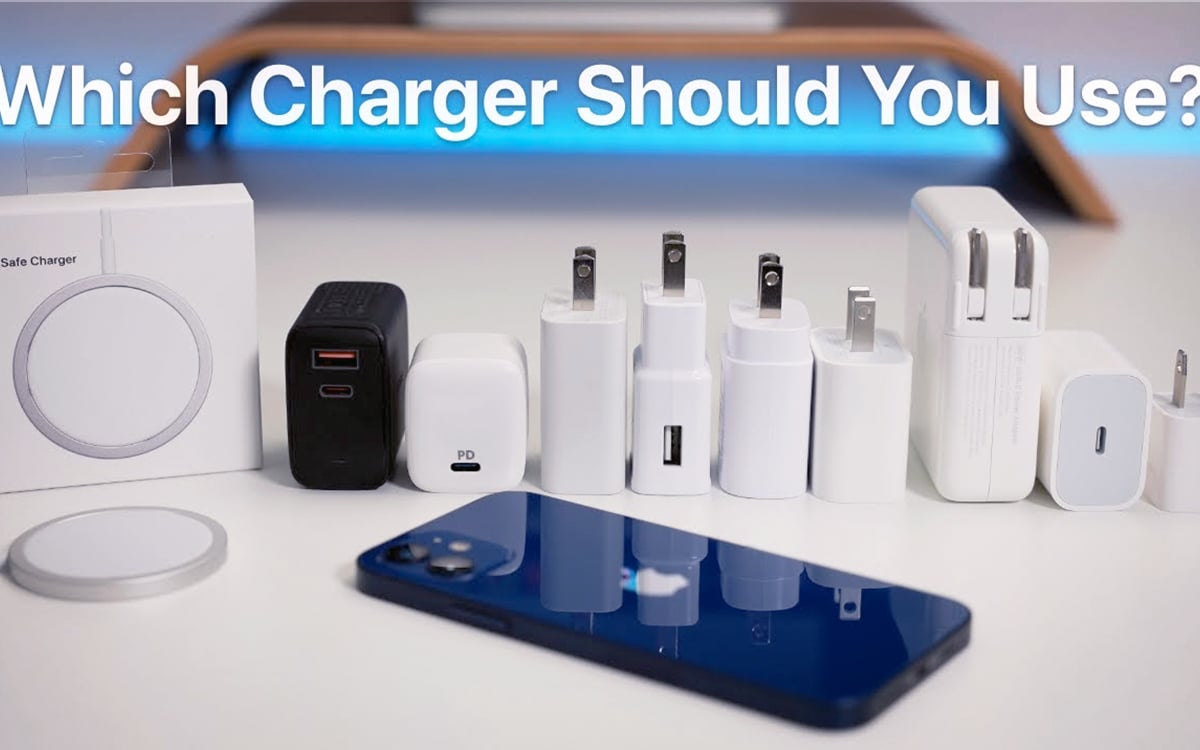 The MagSafe charger of the iPhone 12 and iPhone 12 Pro can only reach the power of 15W with a precise official power supply. According to a test, only the 20W power adapter can achieve such a charging speed. Exit therefore the adapters of competing brands, or even the 96W adapter of your MacBook Pro which only allows you to reach a maximum power of 10W with MagSafe.

The Zollotech YouTube channel uploaded a video. We discover a very interesting test around the new MagSafe wireless charger. The magnetic charging mat is in fact sold without an AC adapter – like the iPhone. On the Apple site, a page dedicated to MagSafe (which was still in English at the time of this writing on the French site) explains that to use the accessory in the best conditions, you simply need “Connect the USB-C connector on your MagSafe to an Apple USB-C charger of 20W or more”.

Apple adds: “Your charger MagSafe requires an AC adapter of at least 12W“. And specifies that “The iPhone charges less quickly when you use a charger less powerful than 20W”. Apple also explains that third-party chargers can allow the accessory to function normally. : “You can connect it to one of the USB type C ports on your Mac or to a third-party charging unit that complies with current security standards”.

Contrary to what Apple claims, only the official 20W charger can charge the iPhone 12 in 15W

On paper, therefore, the MagSafe charging mat should rather benefit from broad compatibility with Apple and third-party adapters.. However, this is not really what the Zollotech chain was able to observe after analyzing the energy transmission with several different adapters. It seems that only the official 20W Apple adapter can charge the iPhone 12 in 15W with MagSafe:

The first surprise is the ridiculous amount of power delivered by MacBook Pro’s 96W AC adapter. The second is that even very powerful third-party branded chargers do not allow charging speeds on the order of what Apple promised. We note that the MagSafe charger is basically a Qi charging mat surrounded by magnets. It works with other smartphones, but according to Apple is then limited to 7.5W.

Android smartphones are limited to 1.5W instead of 7.5W

Note that the device does not exceed the minimum charging speed much with this type of adapter. It is likely, in fact, that current third-party chargers on the market are not yet well optimized for the MagSafe charging profile, and that we will have to wait a little longer for the latter to adapt. On the other hand, we remain a little forbidden with regard to the 96 W charger of the MacBook Pro which should nevertheless allow to reach the maximum charging speed without any problem.

In addition, the Zollotech test shows a aggressive temperature management – as soon as the iPhone 12 heats up, the charging power tends to drop below 10W. Protective iPhone cases also tend to raise the temperature faster. Latest revelation: according to his tests, we are still very far from 7.5W of power with Android smartphones. According to the YouTube channel, the MagSafe charger does not deliver more than 1.5W with these. Regardless of the AC adapter.

Which shouldn’t even be enough to charge most high-end smartphones a bit. We note, however, that the product has only just been released, and that it remains at this stage quite possible that Apple improves the compatibility of its charger via a simple software update on the iPhone 12. We hope so because if applicable, Apple’s communication around MagSafe, which we mentioned above, and which is extracted, it is emphasized, from the French Apple site, would then fall under false advertising.