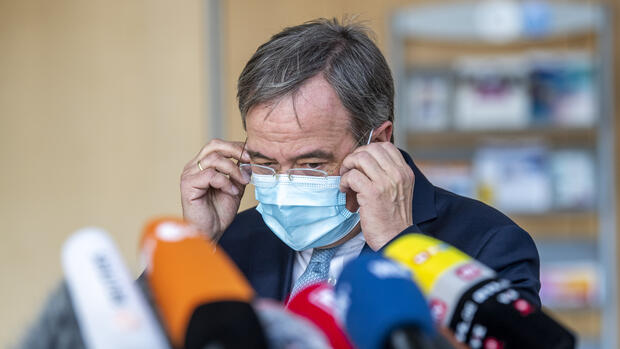 Berlin Armin Laschet (CDU) hesitated a few days and then ordered a “lockdown light” in the Gütersloh district. “In this situation, you have to weigh up responsibly, again and again, every day,” Laschet defended his change of course. The massive corona outbreak in the vicinity of a meat factory is not only a challenge for Laschet as Prime Minister of North Rhine-Westphalia. Laschet is now under observation nationwide as a politician who is applying for the CDU chairmanship. What figure does he make as a crisis manager?

The Gütersloh district has become a corona hotspot. The number of infected people in the meat factory is more than 1,500, and around 7,000 people are in quarantine.

Nevertheless, Laschet had initially waited and only then imposed regional restrictions after public pressure. The North Rhine-Westphalian opposition shot at him long ago. “The weak leadership of this government is a risk for the fight against pandemics,” teased Thomas Kutschaty (SPD), opposition leader in the state parliament of North Rhine-Westphalia.

The situation is delicate for Laschet. In the past few weeks, he had campaigned to loosen the corona rules as quickly as possible. In public, he was perceived as the opposite of the Bavarian Prime Minister Markus Söder (CSU), who stood for a restrictive course.

Now Laschet stands between the citizens in the district of Gütersloh, who are protesting about the closed daycare centers and schools, and those who want a much more determined approach. “He has to be careful not to serve the image as a hesitant and hesitant again,” says a CDU leader.

Difficult to set your own topics

So far, the crisis has been a competitive advantage for Laschet in the struggle for the CDU chairmanship. While the candidates Friedrich Merz and Norbert Röttgen hardly appeared in the public eye due to the pandemic, Laschet was omnipresent as Prime Minister. “Merz and Röttgen will have a hard time mobilizing their own issues until the party congress in December,” predicts political scientist Karl-Rudolf Korte from the University of Duisburg-Essen.

In the corona crisis, the debate narrowed to the strategic precautionary state, which farsightedly protected against dangers. “The executive is responsible for these questions and enjoys the trust of the population. Laschet and Spahn therefore do not have to conduct an election campaign within the party. “

Behind him is the CDU’s economic wing.

Laschet, Merz, Röttgen: Behind the scenes, the election campaign of the three men from NRW, all lawyers, is running for the CDU chairmanship – without one of the candidates would like to call him that. There will be no election campaign events due to the corona crisis. Nor is an ox tour through the party’s national associations planned, as was recently chosen as Annegret Kramp-Karrenbauer after several regional conferences with a wafer-thin lead at the federal party conference in Hamburg.

“Everyone competes with who they stand for,” says the candidates. There is the rather social liberal Laschet, there is the foreign politician Röttgen and there is the economic politician Merz. Everyone tries to find the way to the public through their networks and their topics.

Officially nobody currently wants to know anything about the internal party election campaign. And yet every statement is carefully registered. For example, that Bundestag President Wolfgang Schäuble (CDU) recently praised Laschet’s team partner, the Federal Minister of Health, as saying: “Spahn is doing a good job.” . “

While the only governor, Laschet, with his rational partner and permanent rival Spahn tried to use the crisis as an opportunity and presented himself as libertarian-free after initial difficulties, Röttgen and Merz have so far had no choice but to look at the crisis management from the outside. In the meantime, however, they have spoken again. Merz, for example, extensively covers the field of economic policy, for example when it comes to the stimulus package from the federal government.

As chairman of the Foreign Affairs Committee, Röttgen can even criticize US President Donald Trump. Röttgen largely manages without a large team. Like every member of the Bundestag, he has his employees in the Berlin office and in his home constituency in Bonn.

The foreign policy expert is the third candidate in the race.

Merz knows the Economic Council behind it, a forum that not only provides him with a press spokesman, but also organizes events for him that serve as a stage for Merz. He has been able to score there so far, but they will not take place indefinitely. Laschet, on the other hand, can harness the party apparatus in the country for itself and also use knowledge from the government apparatus.

The candidates actually wanted to discuss the election campaign together. The digital Town Hall rounds that were once planned for April have been canceled. After the summer break, it should be clarified whether they will be caught up. “We will then talk to candidates about the further procedure in due course,” says CDU General Secretary Paul Ziemiak.

But the desire seems to be limited among the candidates. Merz and Röttgen are likely to be more interested in explaining their positions to the general public in the current debate about the EU Presidency starting on July 1st. It would fit well in terms of time, since the election campaign is not supposed to really start until October and November. “The months will again be dominated by the preparation of the party congress,” it says.

Many only decide at the party conference

“Future aura and confidence make candidates selectable,” explains political scientist Korte. “It will therefore be decisive for the candidates how they want to position the economy, society and politics in order to be resilient in the next crisis.” Korte considers “post-corona creativity” necessary: ​​”The new is by no means the return of the Elderly, ”clarifies Korte. “New compositions, new contours and new alliances are required.”

They will be forged at the latest at the federal party convention. The aim is to convince the 1001 delegates, they are free and not subject to any instructions. And so the candidates are certain: “The majority will only decide at the party convention.” And yet, like on the phone a year ago, officials are being hugged in the hope that they will keep their approval until the election.

Above all, however, in addition to personal sympathy and professional competence, there is also the question of whether the future chairman of the CDU qua Amt will also be the next candidate for chancellor of the CDU – or maybe not Markus Söder, CSU chairman and asked a lot about his in the corona crisis Federal level ambitions. He regularly rejects speculation. “The most beautiful way in Berlin is to Bavaria,” he likes to flirt or say: “My place is in the Free State.”

Today yes, but tomorrow? In any case, in view of the surveys, he is clearly ahead of his Prime Minister colleague Laschet and of course even more so than Röttgen and Merz, who are not currently involved in government. Söder has even managed to get the CSU back towards an absolute majority – even if only in the polls, the state parliament election is not due until 2023. In January 2021, Söder imagines, the candidate question will be decided.

Not without the CSU

Laschet and Söder have had a remote duel in Corona crisis management in recent months. Söder rushed to the lockdown in Bavaria in March, Laschet later in North Rhine-Westphalia when it came to the easing.

Laschet recently also underlined his party’s right to stand as a candidate for chancellor. “Many in the Union share the view that the successes of Konrad Adenauer, Helmut Kohl and Angela Merkel can also be attributed to the connection between the chancellorship and party leadership,” said the CDU politician. He also “always saw and said this”. And Laschet referred to Soder’s own rejection of any ambitions to become chancellor: “I take that seriously.”

And yet one of the questions in the election of the new CDU chairman is: “Who is Söder compatible?” So who is able to make a good team with the CSU chairman in the election campaign and also to unite the two parties? “The new party leader has to work with CSU leader Söder at all levels,” warned political scientist Korte.

“The clever cooperation with a new higher integration between the CDU and CSU” alone guarantees the election success. “The poor poll values ​​and election results of the Union in the past few years were largely caused by the CDU and CSU.”