Researchers from the Israel Institute of Technology (Technion) were able, through a structure similar to a black hole created in 2016, to prove that one of the predictions of British physicist Stephen Hawking was right.

According to Hawking, a singularity is not only a monster that swallows matter and light; it would also spontaneously emit radiation – what became known as Hawking radiation, a weak and yet inexorable emission: if the black hole does not swallow enough matter to compensate for it, it will eventually evaporate and become extinct.

It has never been possible to observe or measure Hawking radiation, which has remained a hypothesis – until now. “If you enter the event horizon, there is no way out, even in the light. Hawking radiation begins outside the event horizon, where light can barely escape. This is very strange because there is nothing there; it is an empty space. However, this radiation starts from nothing, goes out and goes towards Earth ”, he told the website Phys.org the physicist and study co-author Jeff Steinhauer.

Black holes are characterized by monstrous gravity; so gigantic that not even the light can escape from one. For that to happen, whatever was trapped beyond the event horizon (the boundary between being swallowed or not) would have to travel beyond the speed of light – and that, by the laws of physics, is impossible.

Hawking showed, however, that black holes still spontaneously emit light, thanks to quantum mechanics and “virtual particles”, fleeting elements of opposite energies that pair up with particles in the cosmos.

Thus, pairs of photons can be separated at the edge of the event horizon: while a particle with negative energy would be absorbed by the black hole, subtracting energy in the form of a mass from the singularity, another would escape through space – Hawking radiation.

“Hawking’s theory was revolutionary because it combined the physics of quantum field theory with general relativity. Verifying that quantum radiation is very difficult with a real black hole because Hawking radiation is very weak compared to background radiation from space. ”, Steinhauer told the website Live Science.

To create the structure, the researchers used a quantum material called a Bose-Einstein condensate – a phase of matter formed by bosons almost at absolute zero temperature. The Hawking radiation emitted by this analog black hole is made up of sound waves instead of light waves.

The researchers used a gas flow of eight thousand rubidium atoms contained by a laser beam. A second beam was used to create an event horizon in the structure, causing the gas to flow like water flowing down a waterfall, with a particularity: half of the gas flowed faster than the speed of sound. 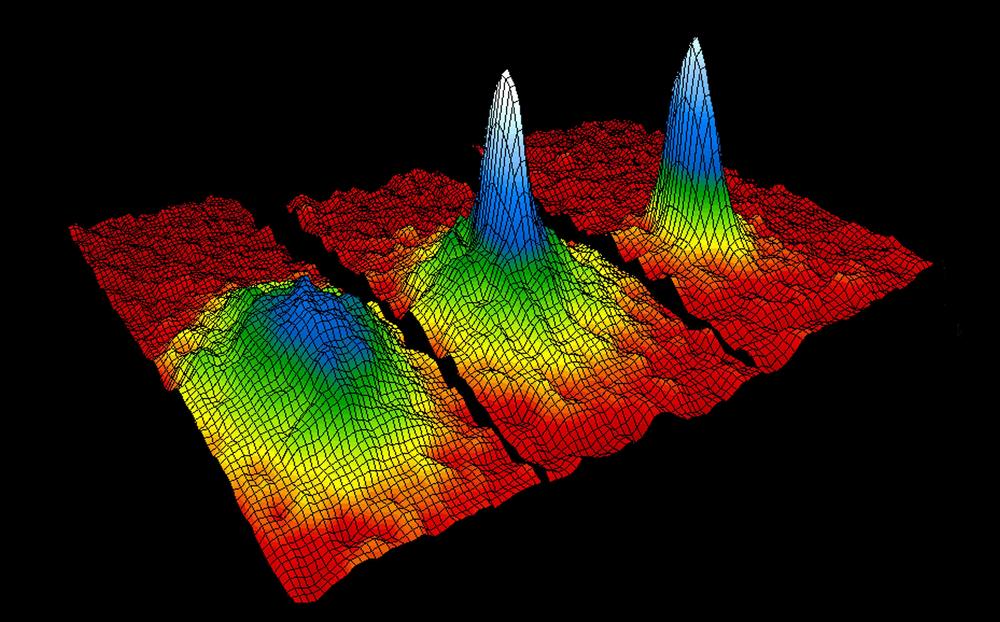 The researchers used a Bose-Einstein condensate to create the analog of a black hole.Source: Wikimedia Commons / NIST / JILA / CU-Boulder / Reproduction

Instead of photons, the researchers looked for phonons (quantum sound waves) to form spontaneously. “Phonons in the slowest half walked against the flow of gas, far from the event horizon, while those in the fastest half were trapped by the speed of the supersonic flow of gas, as in a black hole: once inside, it is impossible to get out” said Steinhauer.

The next step was to confirm that Hawking radiation would remain constant. Each time the researchers took a photo, the 0.1 millimeter-long artificial black hole was destroyed by the heat generated in the process, which forced the team to produce the “uniqueness”, take a photo and then create another one – process repeated 97 thousand times for 124 days. “But we were able to show that the radiation was stationary, exactly what Hawking predicted,” concluded the physicist.