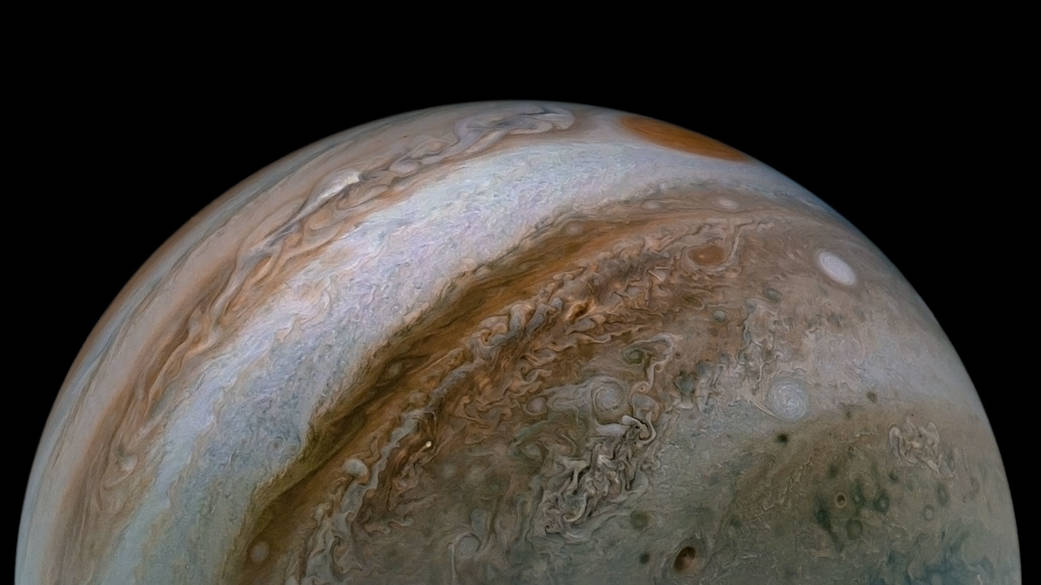 The idea in common imagination that the planet Jupiter is actually a failed star is not new. But where did it come from and how close would the planet really be to being a star?

Stars are defined as objects with enough mass to perform the continuous fusion of Hydrogen at their center. Why is a minimum mass required? This is because, with enough mass, the object has at its center enough pressure, temperature, and density, creating the perfect environment for hydrogen fusion, which is not easy to achieve.

During this fusion process, two hydrogen atoms join to form a helium atom and part of the mass is converted into energy, which is released into the medium. This is the main energy source of all objects termed as stars and for most of their lives they will be performing hydrogen fusion. This phase is called the “Main Sequence”. Stars with different masses will have different temperatures and different colors, with the warmest blue and the coldest red.

Globular cluster NGC 3201 observed with Hubble telescope. We can see a field of gravitationally bound stars with different colors. Bluer stars are warmer while redder stars are coolerSource:  NASA

So if there is a minimum mass, what is that mass? Current studies indicate that the minimum mass for an object to start a process of fusion at its center is about 8% of the mass of the Sun, our star. Furthermore, the smallest star currently observed is 9% the mass of the Sun, called AB Doradus C. Comparing these minimum masses with the mass of Jupiter, we are talking about only 80 times the mass of the planet. Considering that stars are born from the gravitational contraction of a cloud of molecular gas and dust, and that binary stars can be born at the same time from the same cloud, this means that with a little more mass in our initial system, perhaps Jupiter could have become a star. But that was not the fate of our Solar System, which is good for us! If Jupiter were indeed a star, the conditions of life on Earth would probably not be possible. 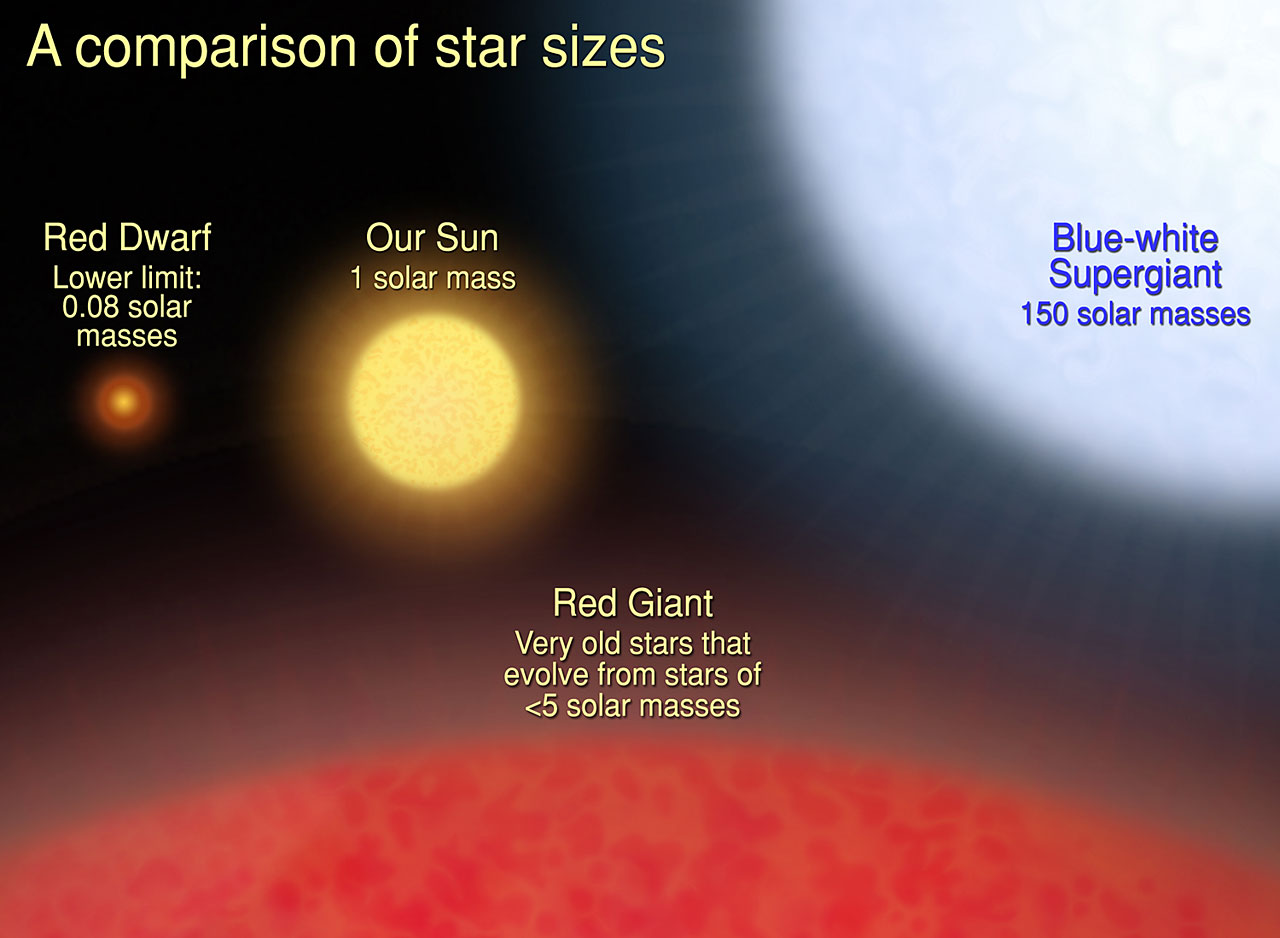 Comparison between star sizes. In yellow we have the Sun (“Our Sun”), in orange a star with 8% of the solar mass (“Red Dwarf”), in white, a star with 150 times the mass of the Sun (“Blue-White Supergiant”), and in red an old star evolved less than 5 times the mass of the Sun (“Red Giant”). Note that the last one, although not the most massive, is the biggest. This is because in the last stages of the star’s life, its layers expand, increasing in size but not mass.Source:  NASA, ESA A. Feild (STScI)

So are all objects with masses between 1 and 80 times the mass of Jupiter considered planets? No. There is another category of objects called Brown Dwarfs with masses between 13 and 80 Jupiter masses. Its formation is similar to that of stars and these objects are considered “failed stars”. This is because they do not have enough mass for continuous hydrogen fusion at their center but, on the other hand, they are massive enough for other physical energy release processes. So, brown dwarfs have some energy production mechanisms, but not always at their center and not the continuous fusion of Hydrogen (the more massive brown dwarf cases get sporadic fusion of the element).

Despite the name, they have different colors to the naked eye, depending on their mass. The most massive ones may appear orange and the less ones magenta. Furthermore, despite having certain energy production mechanisms, they are considered cold objects and therefore emit more in the infrared region of the electromagnetic spectrum. The closest known dwarf is in the Luhman 16 system, 6.5 light years from our Solar System. 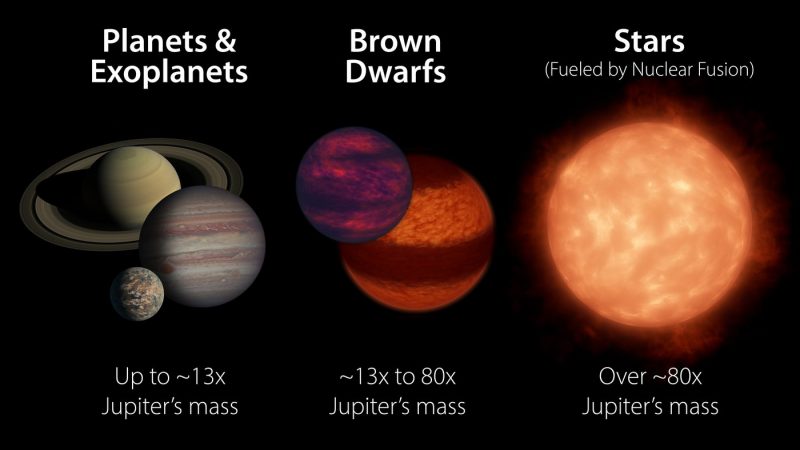 Despite the distance between Jupiter’s mass and the minimum mass of a star, the fear that the planet would eventually “turn on” and turn into a star has passed through popular imagination. Especially in the year 1994, when comet Shoemaker-Levy 9 collided with the planet and we were able to observe everything live! Many people were afraid that this collision could ignore the planet and represent the terrestrial apocalypse. But, there was absolutely nothing to worry about! Jupiter is a stable planet and it wouldn’t be such a small collision that it would make a difference. For Jupiter to become a star, it would need an additional mass of 80 times its mass. Even if we put together all the bodies in the Solar System (except the Sun), we wouldn’t reach that number!

Despite the fear, the collision of the comet with the planet was a historic moment for humanity, as it was the first time we witnessed interactions and collisions in our Solar System, off Earth, live! Furthermore, research and discoveries about the planet were made possible, such as observing lower atmospheric regions that we generally do not have access to. 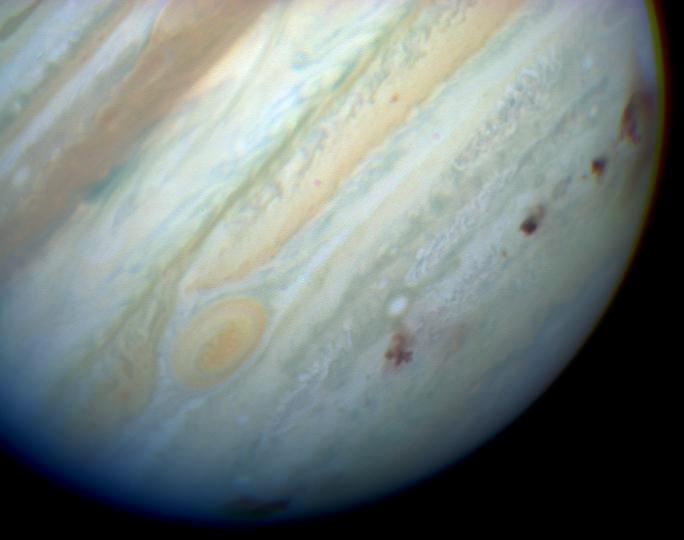 In conclusion: Jupiter is not a failed star! And we are safe with the planet for the next millions and billions of years!

Camila de Sá Freitas, columnist of TechWorld, holds a bachelor’s and master’s degree in astronomy. She is currently a PhD student at the European Southern Observatory (Germany). Self-styled Galaxy Examiner, he investigates evolutionary scenarios for galaxies and possible changes in star-making. It is present on social networks as @astronomacamila