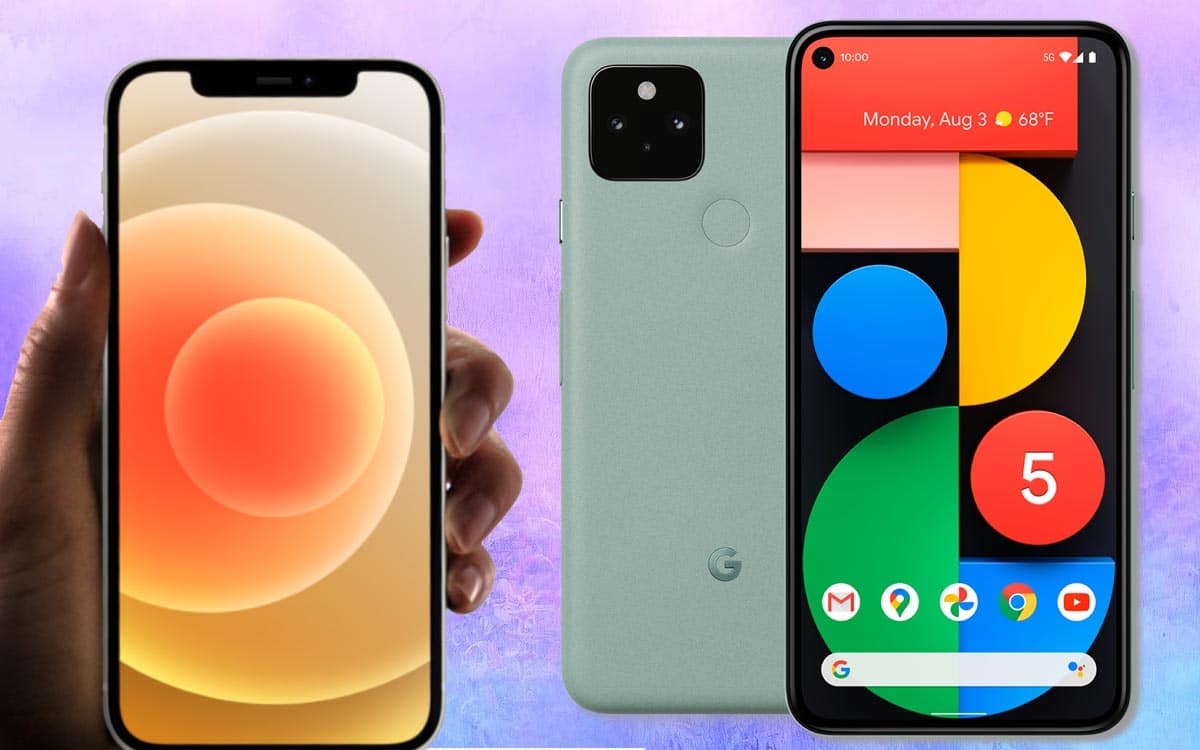 The iPhone 12 and the Pixel 5 are among the main smartphone models launched at the end of 2020. A comparison between the two mobiles from Apple and Google is inevitably tempting, even if they do not really play on the same ground. Here is what we think.

Apple and Google both launched their next generation of smartphones in fall 2020, with the iPhone 12 series on one side and the Pixel 5 on the other. The opportunity to compare the two products and understand who is doing well this year in terms of hardware on the mobile market, beyond the eternal competition between Android and iOS. This comparison will help you make your choice between the iPhone 12 and the Pixel 5, devices with very different proposals.

Let’s start with the technical specifications of the two smartphones, which stand out with a smaller-than-average screen and the presence of only two photo sensors on the back.

IPhones and Pixels are historically phones with an original design that stand out compared to the mass of Android smartphones that end up looking alike. At the front, the iPhone 12 retains the famous notch. While it has been reduced by a few millimeters compared to that of the iPhone 11, it is still extremely disturbing and eats up a lot of space from the top of the screen. This clearly reduces the comfort of use, the price to pay to take advantage of the performance of Face ID and its bulky 3D scanners. For its part, Google has opted for discretion with a punch integrated into the screen to hide the front camera. We are witnessing a change of mind with this Pixel 5 since one of the flagship features of the Pixel 4 was the Soli radar, which was to compete with Apple’s Face ID. With the Pixel 5, we come back to something more classic for an Android smartphone, which also makes it possible to get rid of the large border at the top.

On the back, we find in both cases the photo block at the top left. The Pixel 5’s Google logo is positioned at the bottom while the apple is located in the center of the device. On the Pixel 5, we also have a fingerprint reader, which is oddly not integrated under the screen. On the iPhone 12, still no return of Touch ID for identification, the only biometric solution remains facial recognition via Face ID.

The iPhone 12 and the Pixel 5 share one thing in common: the “small” diagonal of their screen. With 6.1 inches for the first city and 6 inches for the second, we are in the low end of what will be released in 2020. Ideal for those who prefer a more compact format. Both references use OLED technology and thus benefit from better contrast and deeper blacks. The same 19.5: 9 ratio is offered on devices from Apple and Google.

The Super Retina XDR panel of the iPhone 12 displays a definition of 1170 x 2532 pixels, or 460 pixels per inch. The Pixel 5 and its 1080 x 2340 pixels offer a slightly lower resolution of 432 pixels per inch. But it makes up for the refresh rate, which reaches up to 90 Hz, while the iPhone 12 is still limited to 60 Hz, Apple believing not to be able to offer a suitable autonomy on its product with both 5G and a screen of more than 60 Hz.

The iPhone 12 panel is HDR and Dolby Vision compatible, while that of the Pixel 5 provides HDR10 + support. The latter is also entitled to the Always-on display feature which allows basic information such as the time, the battery level or incoming notifications to be displayed continuously on the screen. A mode which the iPhone is once again devoid of. 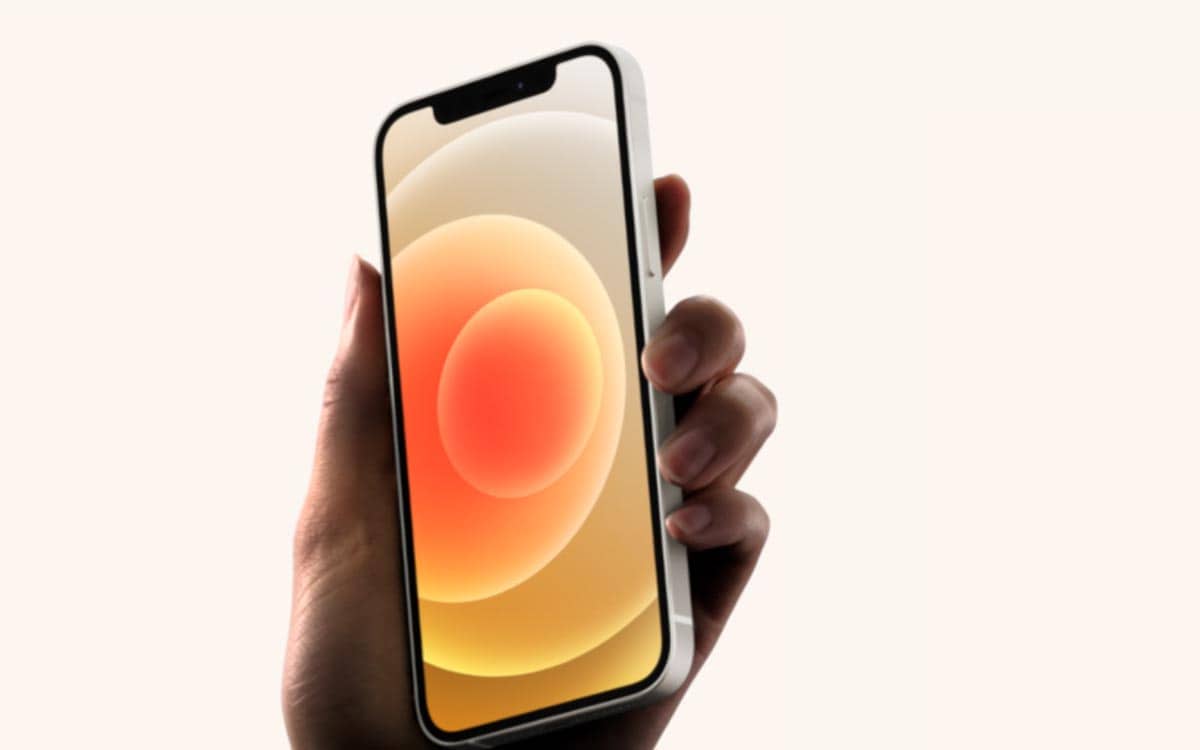 The iPhone 12 is a racehorse

Thanks to its powerful chips and neat software optimizations, Apple systematically manages to make its iPhones more powerful than the best Android smartphones. Here, there is absolutely no match since to reduce costs, Google has taken the decision not to even equip its Pixel 5 with the best SoC available. No Snapdragon 865 and even less Snapdragon 865 Plus for the flagship, but a simple Snapdragon 765G rather mid-range oriented. This remains an interesting alternative to improve the price-performance ratio of the product and more than enough for many users, but the reality is there: the iPhone 12 is much faster.

The latter embeds the latest generation of in-house chip, the A14 Bionic, manufactured using a brand new 5nm engraving process, a first in the consumer mobile market pending the Snapdragon 875 from Qualcomm, the Exynos 2100 from Samsung and the Kirin Huawei 9000. Speed, power, a gap separates the iPhone 12 from the Pixel 5.

But despite its repositioning, the Pixel 5 is still 5G compatible, just like the iPhone 12. With both, it will therefore be possible to benefit from the latest mobile network standard, whose deployment in France will accelerate in the coming months.

Twice the RAM on the Pixel 5

In terms of memory, the iPhone 12 stuck at 4GB RAM, while the Pixel 5 offers 8 GB of RAM. Note all the same that iPhones have always tended to have less RAM than their Android competitors, but the optimizations made by Apple at the software level make it possible to effectively compensate for this lack. 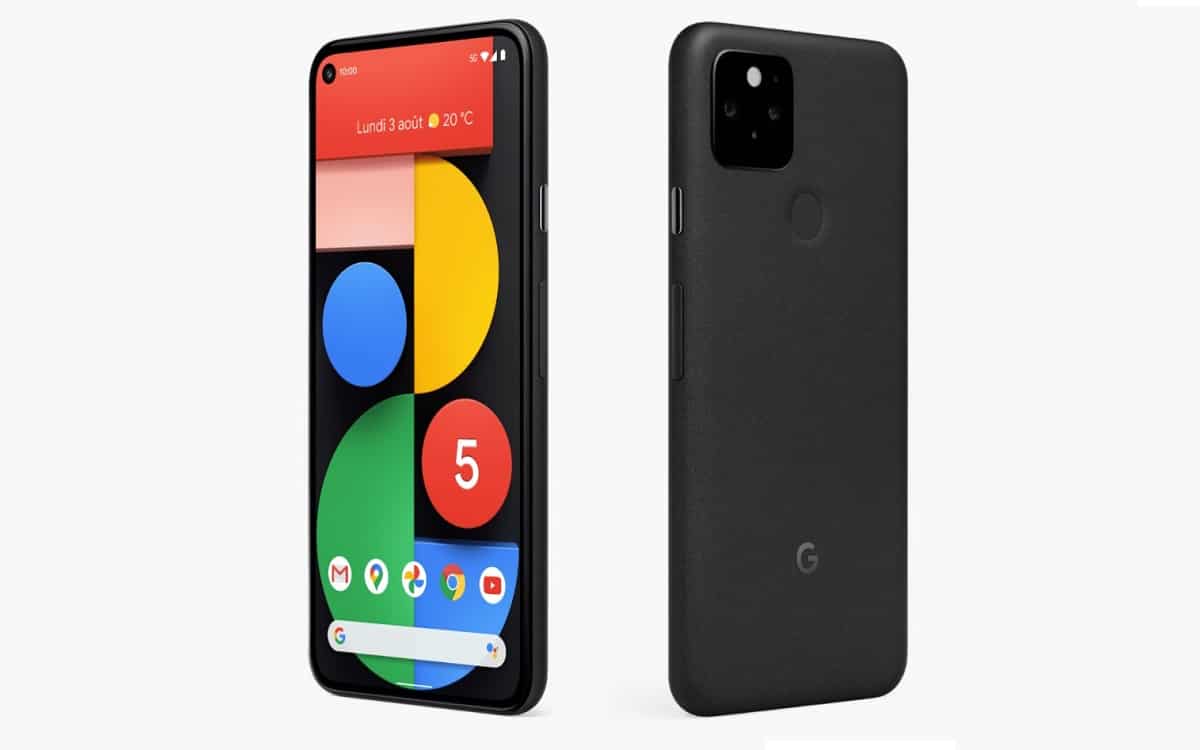 The Pixel 5’s storage space reaches 128 GB in UFS 2.1, where we would have liked to see UFS 3.0. On the iPhone, three possible configurations: 64, 128 and 256 GB, each time in NVMe. There is no microSD card slot to expand the storage on either side.

A big battery for the Pixel 5

Let us come to autonomy. Again, the iPhones and Pixels have for a long time had one thing in common that differentiated them from all other smartphones: the presence of a battery with a low capacity. With more or less success. The autonomy of the iPhone has often been criticized and Apple has managed to raise the bar with the iPhone 11 series. For their part, the Pixels have never been champions of endurance, but the Pixel 4 was particularly disappointing in it. matter. Google has just revised its copy and has shown itself to be much more generous than usual with a 4080 mAh accumulator. The iPhone 12 is indented with the 2815 mAh battery capacity, but Apple promises a battery life similar to that of the iPhone 11. 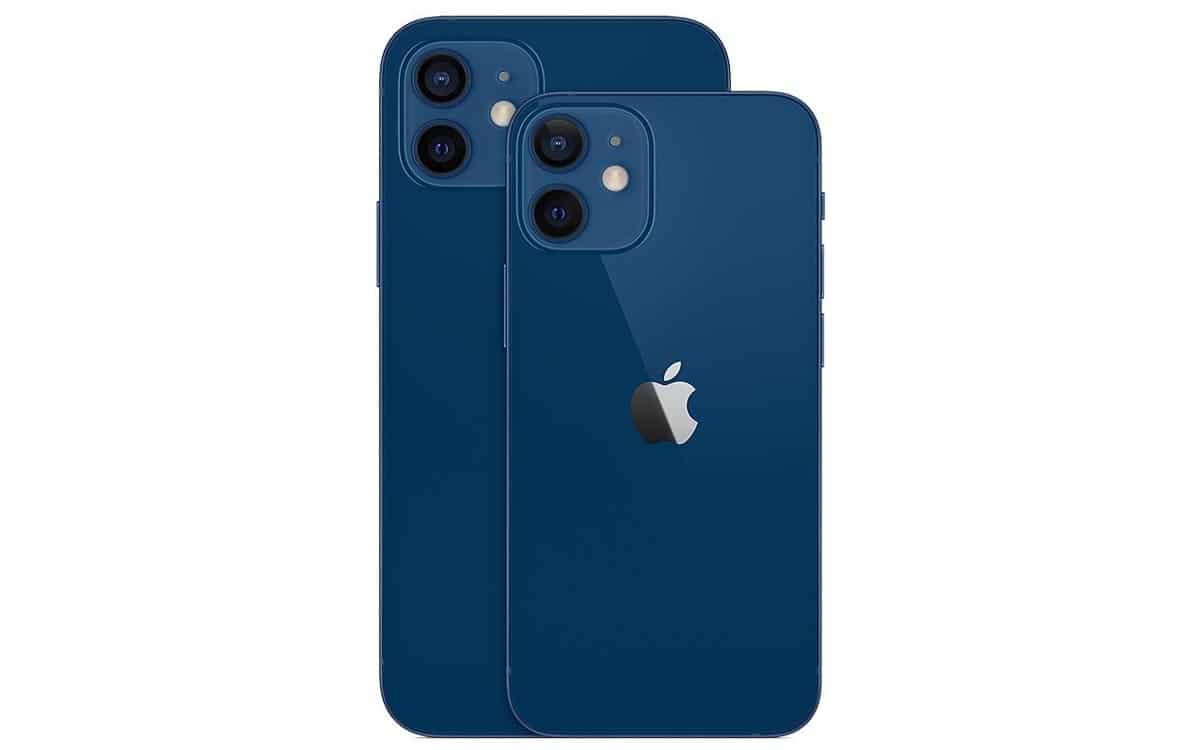 There are few differences with regard to wired charging: 20W for the iPhone 12 and 18W for the Pixel 5. With an element to underline all the same, the charger is not included with the iPhone 12, which may incur additional costs if the user is not already equipped. Both devices feature wireless induction charging, but Apple has done a lot this year with its MagSafe charging mat. A magnet system allows the iPhone to be placed in the best possible place for efficient charging, which can reach 15W. On the other hand, only the Pixel 5 offers the reverse charge function to charge accessories with the smartphone battery.

iPhone 12 or Pixel 5, which is the best camera phone?

Then comes the thorny question of the photo. On one side or the other, Google and Apple have never succumbed to the megapixel race and the proliferation of sensors for their Pixels and iPhones, which has not prevented them from making great camera phones, especially thanks to to the excellent software treatment of both. Let’s see what they offer us on this generation.

The eternal Android vs iOS debate

This is of course one of the most differentiating factors between the Pixel 5 and the iPhone 12. The first runs Android 11 while the other is powered by iOS 14. What if the two operating systems do not. have stopped copying each other over the years and look more and more alike (with the latest example of the widgets integrated into the iOS home page), there are still differences. There is no question of making a complete comparison of the two OS here, this subject alone would be worth a file devoted to it, but let’s recall the basics. Android, even if it was closed recently, remains a much more open system than iOS and which leaves room for customization. iOS for its part is all about security, even if it means withdrawing users’ freedom. It is part of an Apple ecosystem that gives pride of place to interactions between devices and the firm’s services. But third-party platforms are often mistreated, as evidenced by the ban of xCloud on iPhone for non-compliance with the rules of the App Store, while there is no problem with Android. 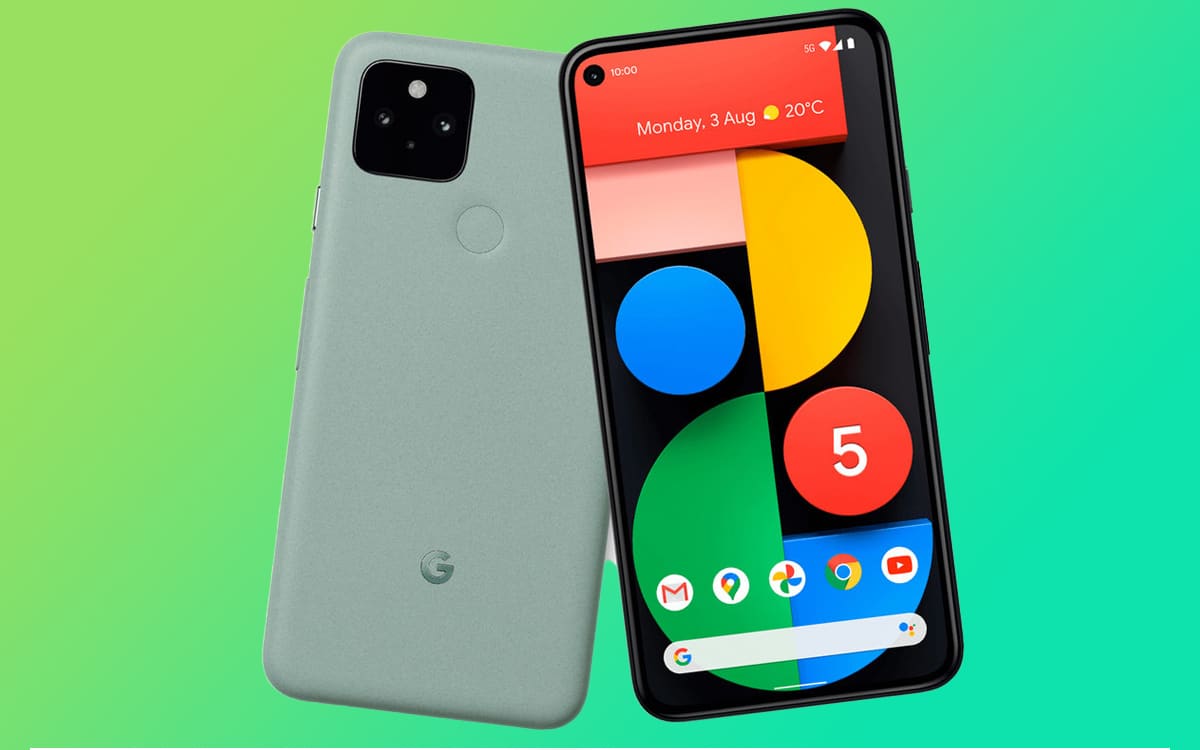 As for software tracking, Google has announced three years of feature updates for its Pixels. No exact deadline from Apple’s side, but its iPhones are generally updated for five years. Apple managing iOS and Google being in charge of Android, the speed of updates and deployments of security patches is of course at work.

The iPhone 12 much more expensive than the Pixel 5

The official price of the iPhone 12 is 909 euros, while the Pixel 5 is available in France for 629 euros. A significant difference of 280 euros which can tip the scales towards the Pixel 5 when the budget is limited. Especially since for 909 euros, the iPhone 12 is only entitled to 64 GB of storage space. You have to pay 959 euros to go to 128 GB, like the Pixel 5. A 256 GB variant is also marketed, at 1079 euros.

The two compact photophones are great proposals. Unless you’re a strong supporter of Android, the iPhone 12 is overall a better product than the Pixel 5, but this is easily explained by the price difference between the two devices: the Pixel 5, with more storage, is almost 300 euros cheaper, the price of a good mid-range.

We still appreciate the efforts made by Google in terms of autonomy. The iPhone 12 impresses with its powerful A14 Bionic chip engraved in 5nm and its video capabilities. If you are looking above all for a photophone or a device to consume multimedia, the Pixel 5 does the job very well for its price thanks to its powerful software and its 90 Hz OLED screen without notch. The iPhone 12 will suit those who seek speed above all else or who refuse to part with iOS.