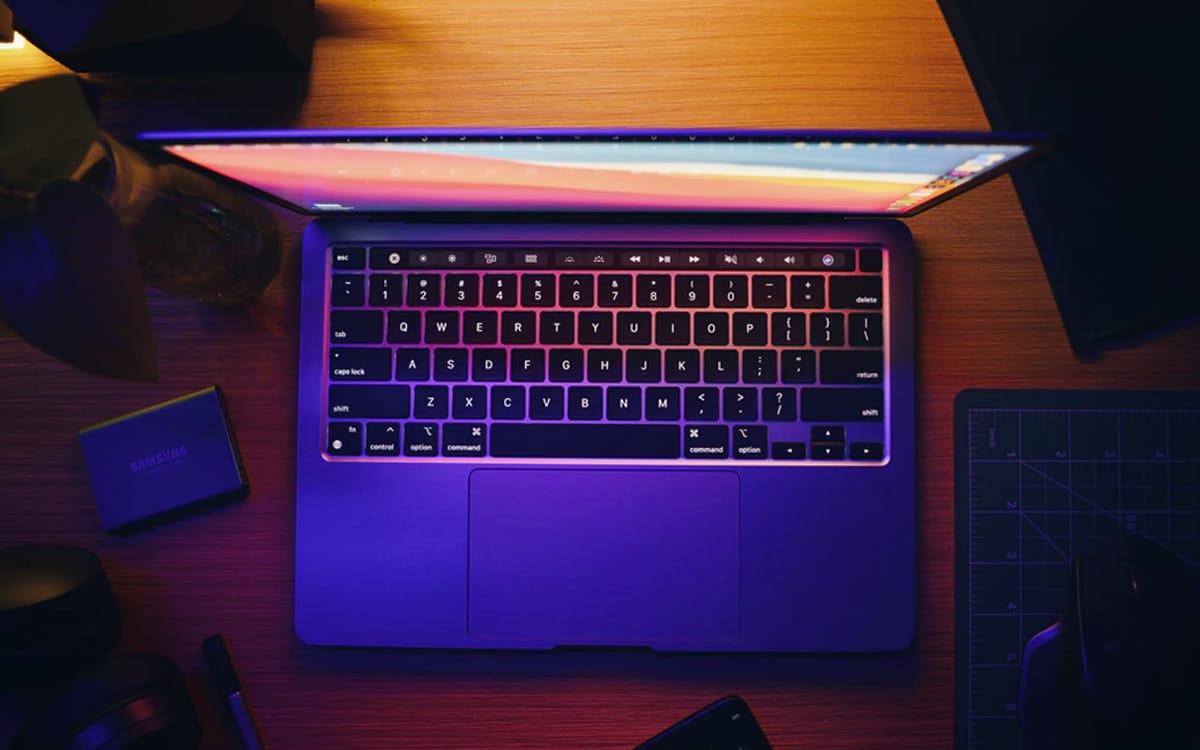 In response to the performance of the Apple M1 chips, Intel has decided to release a series of benchmarks on its 11th generation Core i7 chips. The tests, chosen with care, are supposed to show that Intel is in control. But both the methodology and the results seem suspect.

By separating from Intel, and launching its own M1 chips with stunning performance, Apple has apparently succeeded in putting the world’s silicon leader under pressure. It must be said that Intel struggles to keep up with its competitors on the fineness of the engraving – and energy performance.

So, in order not to give the impression of being totally caught off guard with its 11th generation of Core i7 mobile processors, Intel has just published a benchmark series chosen specifically to show the superiority of Intel. 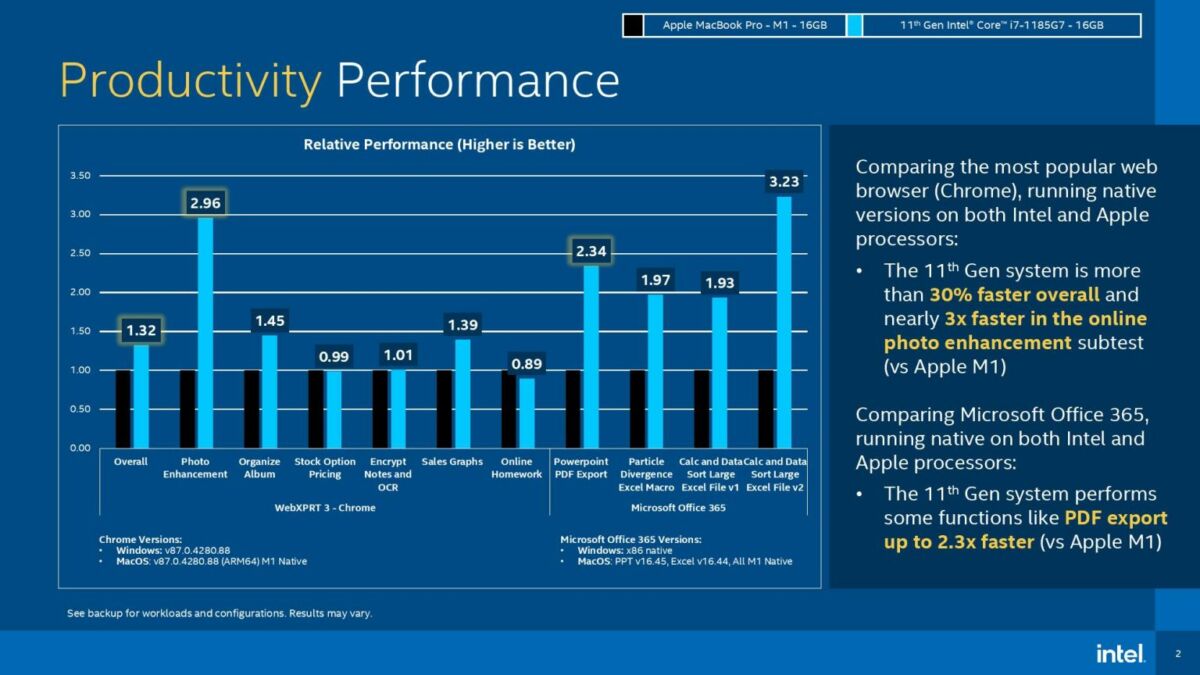 It should nevertheless be stressed from the outset: since their release, a large number of independent benchmarks have indeed observed a surprising superiority of Macs with M1 chip on performance and autonomy – compared to PCs running ARM or Intel CPUs.

In its benchmarks, Intel is trying to demonstrate its superiority in certain tasks. According to Intel, the 11th generation Core i7 chips would have a head start in the Chrome navigation test, for tasks in Office 365, Adobe suite applications, and artificial intelligence. 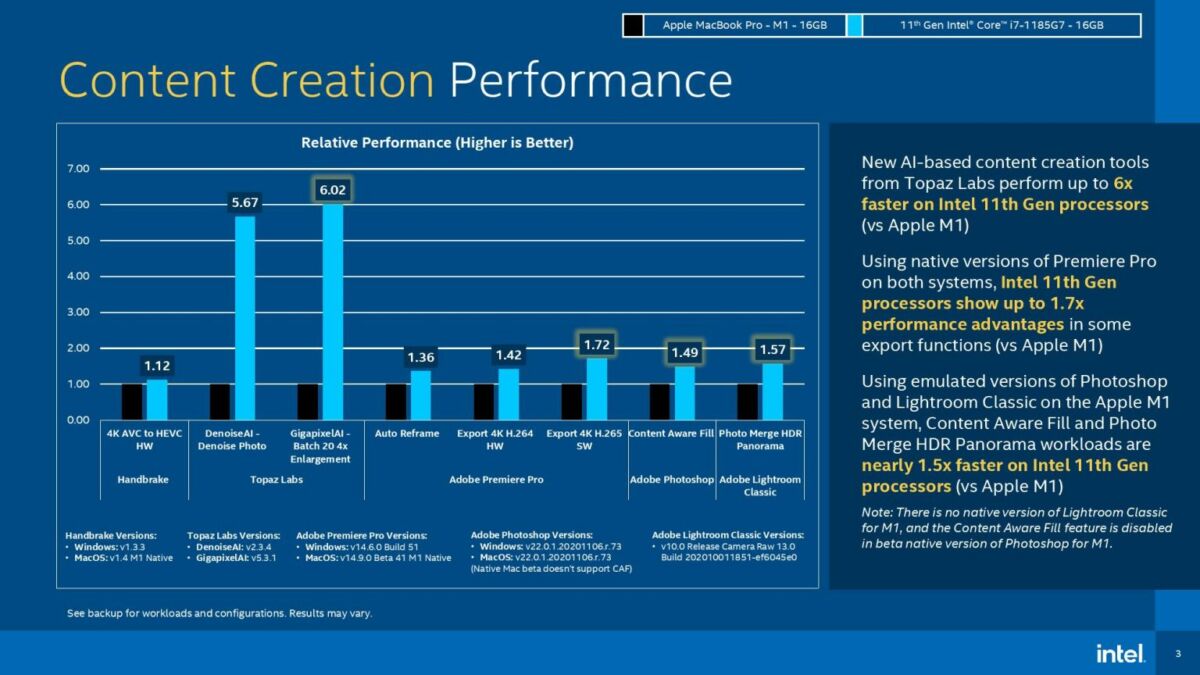 On the video game side, too, Intel highlights a major gap. The founder, however, does not go so far as to boast, and notices that many games are simply not available on Mac. Finally, Intel is trying to undermine Apple’s claims in terms of autonomy.

According to Intel, which ignores the hundreds of independent tests (including our own) which have all concluded to the contrary, Apple’s claims in terms of autonomy are a bluff. In practice, according to Intel, 11th generation Core i7 laptops have quite comparable battery life. 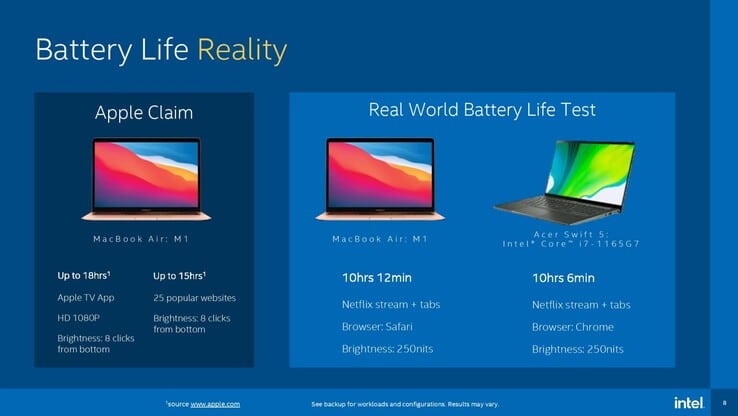 Intel tackles its competitor on the issue of compatibility with external displays – while emphasizing that PC customers, whatever their brand, benefit from more choice, with features such as the touch screen that are still unavailable in the Apple ecosystem. So what can we conclude from these results? Of two things one – this series of benchmarks has a objective for Intel: to show that its latest processors remain in the race against the chip of the MacBook Air, Pro and Mac Mini M1.

Why these official Intel benchmarks are questionable

And we won’t go by four ways: we have serious doubts about the seriousness of the tests conducted by Intel. We can also notice that the founder did not hesitate to use questionable tactics such as, for example, changing machines to strengthen his results. For example, during the battery test, Intel preferred to use the MacBook Air, rather than the more enduring MacBook Pro, which the comparison would be less flattering.

Some tests, notably the artificial intelligence test, are also optimized for features specific to Intel processors, which inevitably gives them the advantage. Without this necessarily translating into real performance differences with conventional applications. Remember that it is common for tech players to choose benchmarks that highlight their strengths over the competition very carefully.

However Intel has rarely seen such ploys. What is revealing. Intel indeed gives the impression of being paralyzed by a situation that is in the process of overtaking it. There is indeed a real risk that markets will end up escaping Intel. The founder was the architect of the generalization of the x86 architecture in PCs, but because of its mobile orientation and autonomy, the ARM architecture is attracting more and more PC manufacturers who want to deliver machines with high autonomy .

For now, all the stars are not yet fully aligned so that ARM quickly supplants the x86 architecture. As the first Always Connected PCs with an ARM chip showed, hardware capabilities are nothing without extensive software support. This is probably where Apple has taken a considerable lead. The performance of unoptimized applications on Windows 10 ARM pales in comparison to what Apple offers in its ecosystem.