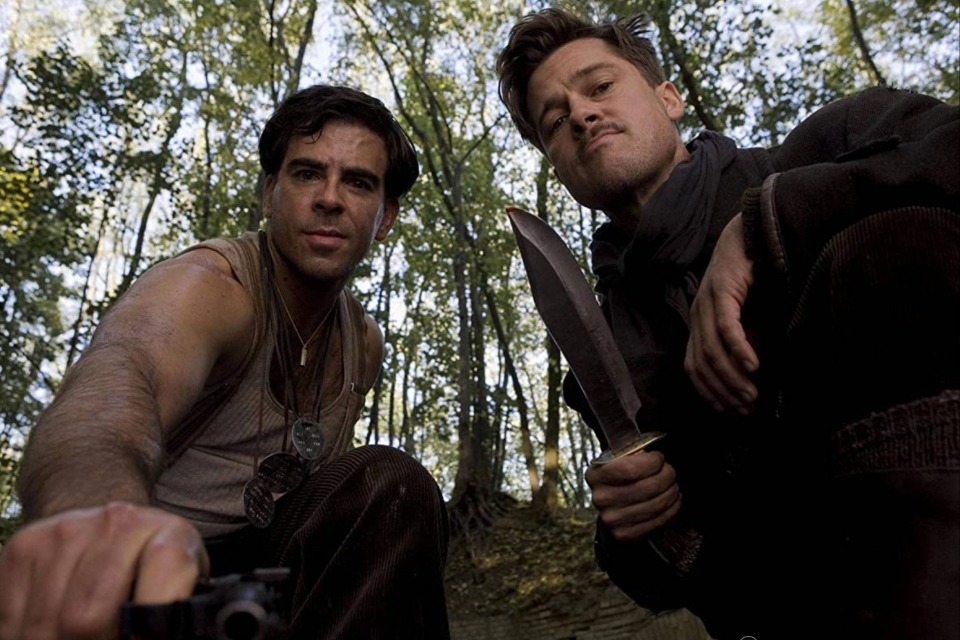 Inglourious Basterds is one of Quentin Tarantino’s most acclaimed films. Nominated in eight categories at the Oscars, the feature took a statuette (for Best Supporting Actor for Christoph Waltz) and is one of the best examples of the filmmaker’s potential. Not only because of the way he commands the cast, but also because of the script, which manages to oscillate moments of tension very well with comic relief. And this was in one of the most tense periods of humanity.

Tarantino intended this to be both a war film and a spaghetti western, and considered the film to be called Once upon a time in Nazi-occupied France (This is the title of the first chapter of the film). Below we present some curiosities about the film and behind the scenes of it.

Tarantino with the main cast of the film.Source: IMDb / Reproduction

Tarantino thought about abandoning the project while looking for someone to play Colonel Hans Landa, thinking that the role would be impossible to play. After Christoph Waltz auditioned, however, Tarantino and producer Lawrence Bender agreed that they had found the perfect actor for the role. In the film, Waltz speaks most of the languages ​​in the film (English, French, German and Italian), and became one of six actors to win an Oscar as a character who spoke mainly in a foreign language. The others are Sophia Loren, Robert De Niro, Roberto Benigni, Benicio Del Toro and Marion Cotillard.

Daniel Brühl, on the other hand, admitted after the film was released that he was not fluent in French, and when Quentin Tarantino asked him to speak French to hear how it sounded, he sometimes mixed French with Spanish, betting (correctly) that Tarantino would not notice. When Bruhl received the translated version of the script, he was able to perfect his delivery in French. The actor also voiced his own lines for Spanish.

The director also considered Leonardo DiCaprio for the role of Colonel Hans Landa. However, he then decided that a German-speaking actor should play the character. DiCaprio worked on the next Tarantino film, Django Unchained (2012) and then shared the screen with Brad Pitt in Once Upon A Time In Hollywood (2019).

The filmmaker also doubted that Diane Kruger was German, since his main works are in English-language films. Tarantino thought she was an American and doubted that she could master German dialogue and accent. Only after the audition did she prove to him that she was really a German.

Actor Til Schweiger, born and raised in Germany, has always refused to wear a Nazi uniform for a movie role. He only agreed to participate in Inglourious Basterds on the condition that he could kill a Nazi in every scene he used.

Sequence in cinema was the one that suffered the most changes.Source: IMDb / Reproduction

There are at least three versions that have gained some significant changes, mainly with the voiceovers. In Russia, for example, there are two versions of the film. One for the general exhibitions, which has all the dialogues dubbed in Russian, except for the dialogues in French and Italian. The second, the so-called “director’s version”, had only the English dialogues dubbed, while the rest were subtitled.

In the German version, in the scene of the game “Who am I?”, In the tavern, the first game is a little longer. It starts a little earlier, with Bridget von Hammersmark (Diane Kruger) at a table with some soldiers already participating in the guessing game. The scene ends with the arrival of Sergeant Hugo Stiglitz (Til Schweiger).

Finally, in the Italian version, the dialogue in Italian spoken by the protagonists in the cinema was changed to a Sicilian dialect, instead of the standard Italian, with the characters being explicitly described as Sicilian. There have also been some changes in the way the Bastards present themselves and Colonel Landa speaks correct Italian, instead of the rather broken Italian of the English version and mentions having been in Sicily, as Aldo did before him.

In addition, he asks the pronunciation of the name only for Aldo / Ezio, asking if it is a surname from Palermo. One last observation is that in the Italian version, instead of thanking Landa saying “Grazie”, Aldo / Ezio responds simply by uttering the Sicilian exclamation “Mizzica!”.

Film is lightly inspired by a real operation.Source: IMDb / Reproduction

Although the film is fictional, it was partly inspired by “Operation Greenup”, a real mission from the Office of Strategic Services (the US intelligence service). In February 1945, agents Frederick Mayer (an American spy born in Germany), Hans Wijnberg (an agent born in Holland, who, like Mayer, was Jewish) and Franz Weber (a former Austrian Wehrmacht officer), were launched parachute in Austria. For several months, Mayer gathered information about the “Alpine Fortress” of the Germans, posing as a French Nazi officer and electrician.

Mayer was discovered by a clandestine market trader, captured and tortured by the Gestapo, but he refused to hand over the other two agents. However, General Franz Hofer, commander of Nazi forces in western Austria, realized that the war was lost and was looking for a way to hand over his forces to the Allies rather than the Red Army. Mayer helped negotiate the surrender of Austrian forces in Germany, which took place in Innsbruck on May 3, 1945.

When Francesca (Julie Dreyfus) mentions ex-actress Lilian Harvey, Joseph Goebbels (Sylvester Groth) gives a tantrum and shouts to never mention that name in his presence. Lilian Harvey had to flee Nazi Germany in 1939 after helping Jewish choreographer Jens Keith to escape to Switzerland.

And Bridget von Hammersmark, the German film star and double agent, was partly based on Marlene Dietrich. Although she never served as an agent abroad, Dietrich worked with the Office of Strategic Services in World War II.