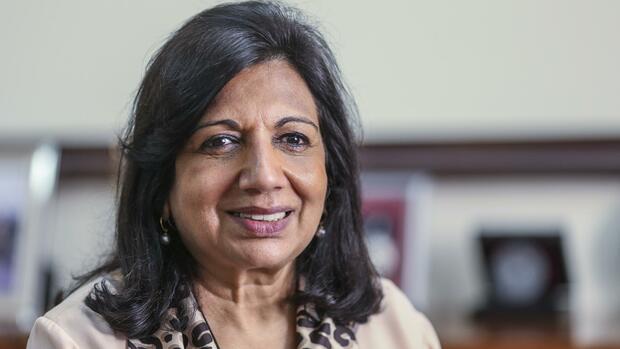 Bangkok India’s most successful self-made billionaire usually has no difficulty in getting her voice heard. At a time when meetings and events are mostly virtual, things are also a little bumpy for Kiran Mazumdar-Shaw.

The biotechnology pioneer is to explain the state of research on Covid-19 in a Facebook livestream for the Indian congress party. The light in your office goes out just a few seconds after the start of the transmission. “Oh shit,” Mazumdar-Shaw says into her microphone. “My electricity has just failed.”

The Indians are used to clear words from the 67-year-old manager. The founder and chairwoman of the biotech group Biocon is one of the few business leaders in her country who have been willing to publicly criticize Prime Minister Narendra Modi’s economic policy in the past. She now speaks plainly also in the corona crisis, which hits the home of the entrepreneur with particular force.

Mazumdar-Shaw, who has just been awarded the title “World Entrepreneur of the Year” by the consulting and auditing company EY, confronts her compatriots with unpleasant truths. She says one of them in the live stream at the beginning of June, shortly after the light in her office flickered again: “We have to learn to live with this virus,” she says. “We cannot just wish this disease away. The number of infections will no doubt increase further. “

With around 350,000 confirmed cases of infection, India is already one of the countries most affected by the coronavirus pandemic. Only in the United States, Brazil and Russia have more Covid-19 diseases been reported. And observers assume that the official numbers are only the tip of the iceberg. The laboratories cannot keep up with the tests. Hospitals in major cities like Delhi and Mumbai are overcrowded. Hundreds of train carriages as well as hotels and ballrooms are to be converted into emergency clinics.

Mazumdar-Shaw is monitoring developments with increasing concern. At the beginning of the pandemic, she expressed hope that India could control the virus outbreak as long as the numbers remained low. She is now horrified to share videos of Covid 19 patients on her favorite communication channel, Twitter, where she is followed by one and a half million people, who are rejected outside the hospital gates for capacity reasons. “It is shocking to see how poorly our clinics are equipped,” she wrote a few days ago. “The patients are the unfortunate victims.”

Rejecting the sick is the opposite of the leitmotif that shaped Mazumdar-Shaw’s career in India’s healthcare industry. She sees herself as a campaigner for affordable health care, which also reaches the lower classes in the country with a population of 1.4 billion. With affordable medicines, your company Biocon made an important contribution to reducing the costs of diabetes and cancer therapies worldwide – and made the founder one of the wealthiest women in Asia.

The business magazine “Forbes” recently estimated Mazumdar-Shaw’s assets at $ 3.8 billion. This is a great contrast to the humble beginnings of her company – she founded it four decades ago with starting capital of just 10,000 rupees, according to the current exchange rate that is just a little more than 100 euros.

Mazumdar-Shaw is the daughter of a master brewer who was responsible for the Kingfisher beer, which is widely used in India, in her hometown of Bangalore. She was interested in science and studied zoology. She would also have liked to be a doctor, but was unable to study medicine.

Instead, at the age of 20, she decided to follow her father’s footsteps – and trained as a master brewer in Australia. But she couldn’t find a suitable job in India. At the time, in the 1970s, she was rejected because she was a woman, Mazumdar-Shaw said in several interviews.

She then took a job at a brewery in Scotland, where she met an Irish entrepreneur who thought it would make sense to have a branch of his biotech company in India. He convinced Mazumdar-Shaw to set up a branch in Bangalore as a joint venture – this became Biocon.

Mazumdar-Shaw started as an entrepreneur in 1978 – initially in a simple garage. There she extracted enzymes from papayas and collagen from the swim bladders of tropical fish. However, sexism also bothered her as a founder when it came to finding employees. “It wasn’t just men who weren’t ready to work for a woman, women didn’t want to do that either,” Mazumdar-Shaw said in a conversation with British broadcaster BBC in 2018. “They came into the garage and thought I was just the secretary.”

Approval for new insulin product in the United States

Despite the hurdles, Mazumdar-Shaw prevailed. Just one year after launch, Biocon was the first Indian company to export enzymes to food manufacturers in Europe and the United States. In the 1990s, Biocon entered the pharmaceutical business and developed cholesterol-lowering drugs.

The company later shook up the insulin market and became India’s largest producer of the hypoglycemic hormone, which became one of the company’s key sales drivers. Just a few days ago, Biocon received approval for another insulin product in the United States – and hopes to be able to further increase sales from the recent almost 900 million dollars.

The company achieved its commercial successes not by cheaply copying existing medicines, but by investing heavily in research into new products. EY boss Carmine Di Sibio gave Mazumdar-Shaw in his laudatory speech when she was voted entrepreneur of the year that “her drive for innovation” made Biocon’s growth possible in the first place.

Mazumdar-Shaw also wants to actively intervene in the fight against the corona virus. In late May, she started a clinical trial of a drug with Biocon in India to help treat very severe Covid-19 courses. She also plans to conduct a similar study in the United States. In her view, the focus on new treatment methods is also important because she does not believe that a high-quality vaccine will be available in the foreseeable future.

“We now have to focus on lowering the mortality rate,” she says, and also has a clear policy requirement: the health system needs significantly more money. “This pandemic has revealed the ugly truth of how terrible the state of health care is.” And in her opinion, that applies not only to India.

More: Fighting poverty in India is facing a severe setback