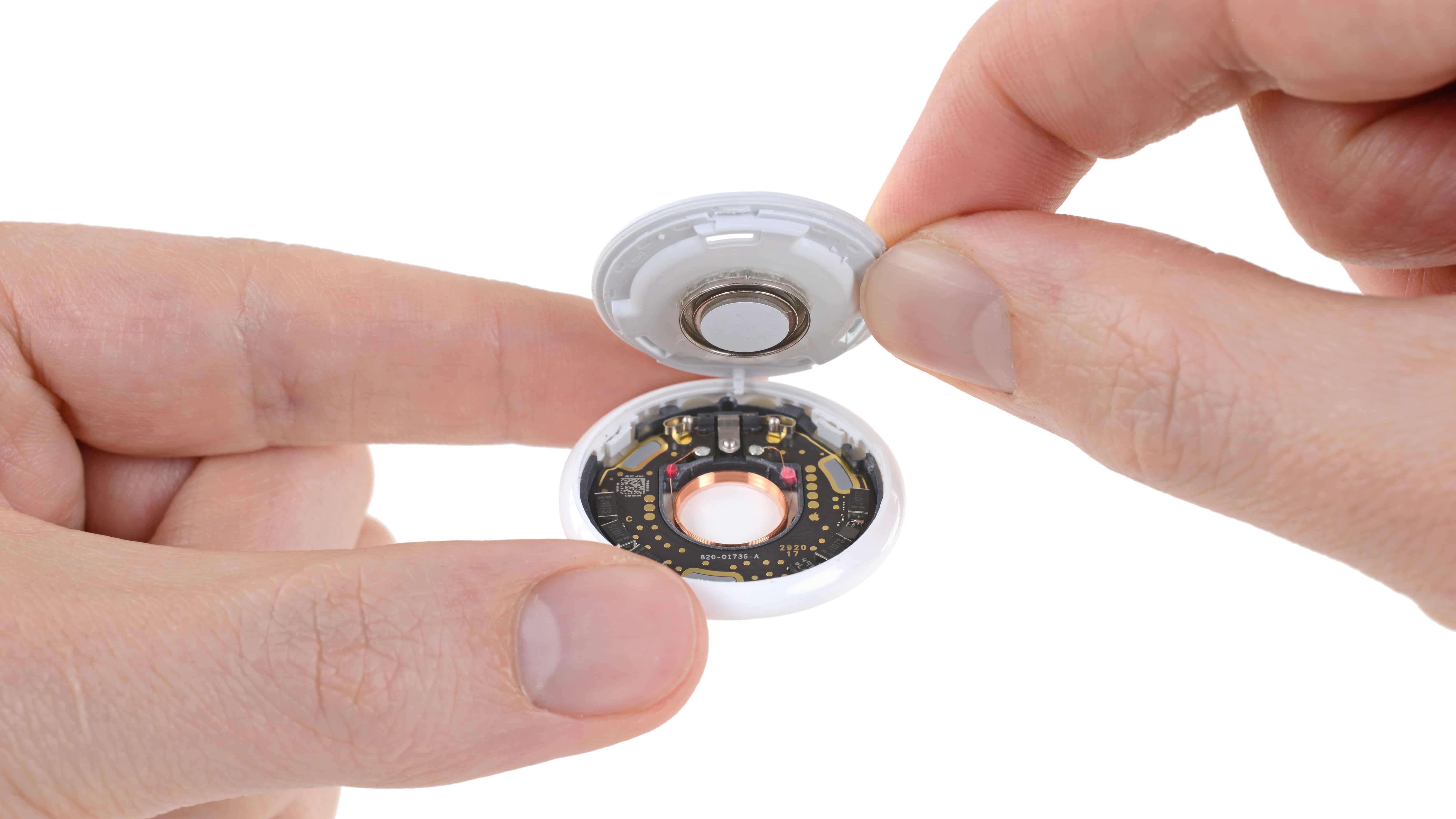 How do AirTags manage to emit such a powerful sound when no speaker or hole is visible, unlike Tile and Samsung SmartThings? To answer this question among others, iFixit has taken apart the new Apple tracker. The device has by far the most compact and integrated design on the market, with amazing tricks to cope with the lack of space. iFixit adds that it has discovered that it is possible to drill a hole in certain places to avoid the purchase of accessories and attach it directly to the key ring.

It’s now a tradition: with each new release, iFixit engineers release a detailed teardown that tells us more about their proprietary tech from the tech giants, how it all came together, and repairability. Barely more than a week ago, Apple held a keynote on the sidelines of which we discovered new multicolored iMacs, an iPad Pro with the M1 chip, and the long-awaited connected tracker of the firm, called AirTag.

iFixit has therefore obtained one of these small white pellets, as well as a Tile Mate and a Samsung SmartThings, just to be able to compare. From the outset iFixit notes that the AirTag, the most compact device of this selection, is the only one to offer Ultra Wideband (UWB) technology to locate objects very precisely inside the home. It is this technology that allows the Find My iPhone app to show the precise direction and distance between you and your lost items.

iFixit dismantles the AirTag and reveals its secrets

A tracker with UWB has just been launched at Samsung, the SmartThings + – but it was not yet available for sale when iFixit drafted its teardown. Despite this additional connectivity, Apple wasted no space in the casing. X-ray analysis reveals that every square millimeter is covered with components except for a thin strip of plastic all around the device.

This is not the case with its competitors, who could, it seems, further reduce the size of their tracker with a little more integration. The AirTags battery compartment opens by sliding its metal cover a quarter with your fingers. No tools are needed. iFixit nevertheless notes that the AirTag is the least easy to open due to the metallic coating and the opening method. Nothing prohibitive, because for once, Apple is at least opening its product to battery replacement by the user, unlike other products.

The battery chosen by Apple is the very standard CR2032 flat battery that can be found very easily in the trade and in competing products such as the Samsung tracker. Dismantling the AirTags beyond this however requires more persuasion. iFixit says it is surprised by the little glue used during manufacturing. Here again, a fairly refreshing point given the block of glue that AirPods are essentially. A little pressure in a vise made it possible to move to the lower level.

At this point, you will probably have a question: where did Apple put the AirTag speaker? Both Tiles and SmartThings have a small grille to let sound out, but AirTag doesn’t. In fact, the trick employed by Apple surprised even iFixit engineers. Apple has indeed succeeded in using the body of the AirTags as a speaker. For this a magnet is attached to the inside of the plastic cover. The coil is attached to the back of the battery compartment. It is therefore essentially this compartment which acts as a diaphragm and the vibrations are transmitted via the battery to the metal cover.

Also read: AirTags are Android compatible, but in only one situation

A much better quality solution than a piezoelectric loudspeaker would be. iFixit ends its dismantling with a funny observation. We told you above, even if the space is rather well used inside the AirTags, there is still a plastic strip around the perimeter of the tracker which does not contain any components. iFiixit therefore decided to take a drill and make a hole in it, history ofadd a feature that currently requires the purchase of an accessory: a key ring. Of course we do not recommend this modification, but at least iFisit shows that it can be considered …