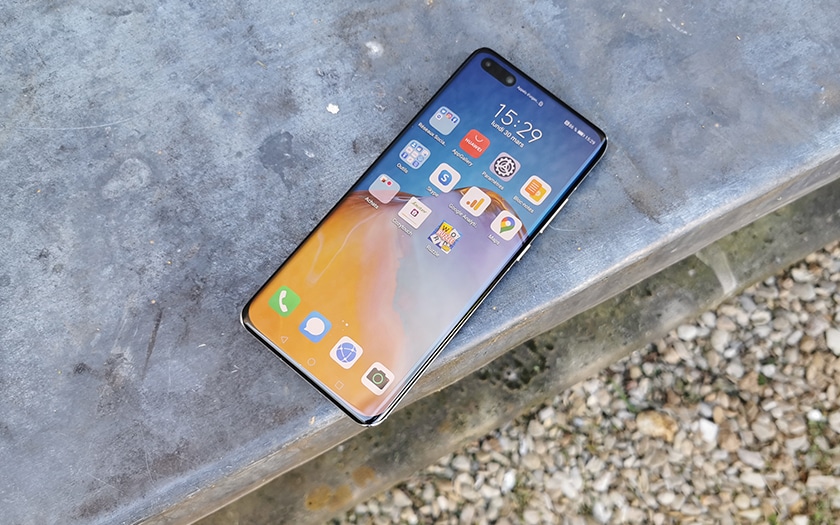 According to a study by Counterpoint Research, Huawei is no longer part of the world’s Top 5 smartphone manufacturers. The brand is positioned in sixth position in the fourth quarter of 2020. It has been 6 years since it was ranked above fifth place. For the first time, Oppo and Vivo overtake Huawei in a global ranking. The first three places go to Apple, Samsung and Xiaomi respectively.

Suffering from US sanctions for almost two years, which the new US president could partially lift, Huawei is inevitably sinking in the rankings of smartphone sales globally. If the firm manages to maintain itself in its domestic market, volumes are dwindling internationally. Despite the excellent performance of its high-end smartphones, including the Mate 40 Pro that we had the opportunity to test, sales are falling, mainly because Huawei mobiles are not compatible with Google Play services.

Consequence: it is the tumble. In a study published by the Counterpoint Institute, Huawei is no longer among the 5 brands that sell the most smartphones in the world. The Chinese firm came out of the Top 5 in the fourth quarter of 2020, moving to sixth place. Its market share is 8% with 33 million smartphones sold. It was, a year earlier, in third position, with 14% market share (56.2 million smartphones sold). Its volumes have down 41% in 12 months. Huawei therefore achieves the largest annual drop in the global Top 10.

Oppo and Vivo overtake Huawei for the first time

The consequence of this sharp drop is the rise of the three other major Chinese brands: Xiaomi, Oppo and Vivo. They are in the fourth quarter of 2020 respectively third, fourth and fifth in the global ranking of brands. This is the first timeOppo and Vivo overtake Huawei globally. The two companies represent 9% and 8% of the market, with 34 and 33.4 million mobiles sold, respectively. They grew by 8% and 6%. 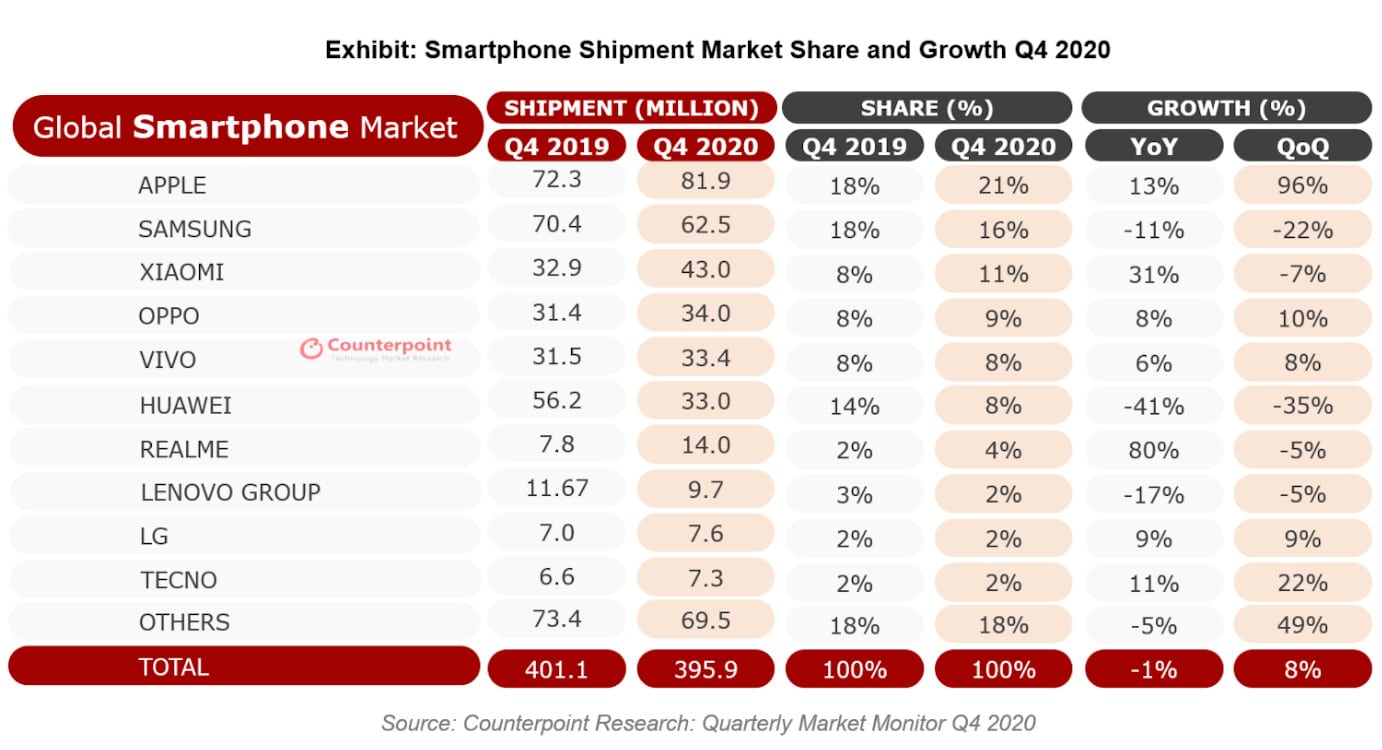 In the fourth quarter of 2020, the first three places go to Apple, Samsung and Xiaomi, in this order. Apple had an excellent quarter selling 81.9 million iPhones, or 21% of the market. It sold 13% more smartphones compared to the same period a year earlier, the second best increase in the Top 5, according to Counterpoint.

Sharp increase for Xiaomi and Realme in 2020

The strongest progression goes to Xiaomi who managed to increase sales volumes by 31% in the fourth quarter of 2020. That is 43 million units sold. The brand now represents 11% of the market. In the world Top 10, the strongest progression goes to Realme. The alternative brand of Oppo has sold 80% more smartphones between October and December 2020, going from 7.8 million to 14 million units distributed. That is 4% of the world market.

While Xiaomi, Apple and Realme are performing well, Samsung is among the brands experiencing a slowdown. In the fourth quarter of 2020, the Korean brand sold 11% fewer smartphones than over the same period in 2019. Or 62.5 million smartphones against 70.4 million a year earlier. Samsung’s market share thus fell from 18% to 16%.

The Top 10 is therefore made up of Apple, Samsung, Xiaomi, Oppo and Vivo in the top five places. They are followed by Huawei, Realme, Lenovo (with Motorola), LG and Tecno. You will notice that LG is in ninth position. The Korean firm has sold 7.6 million smartphones (or 2% of the market share). The brand has increased its sales volumes by 9% in one year. Remember that the brand is considering exiting the smartphone market. A decision which is certainly not linked to the figures for the fourth quarter, but for the whole year …

Huawei returns behind Apple for the whole of 2020 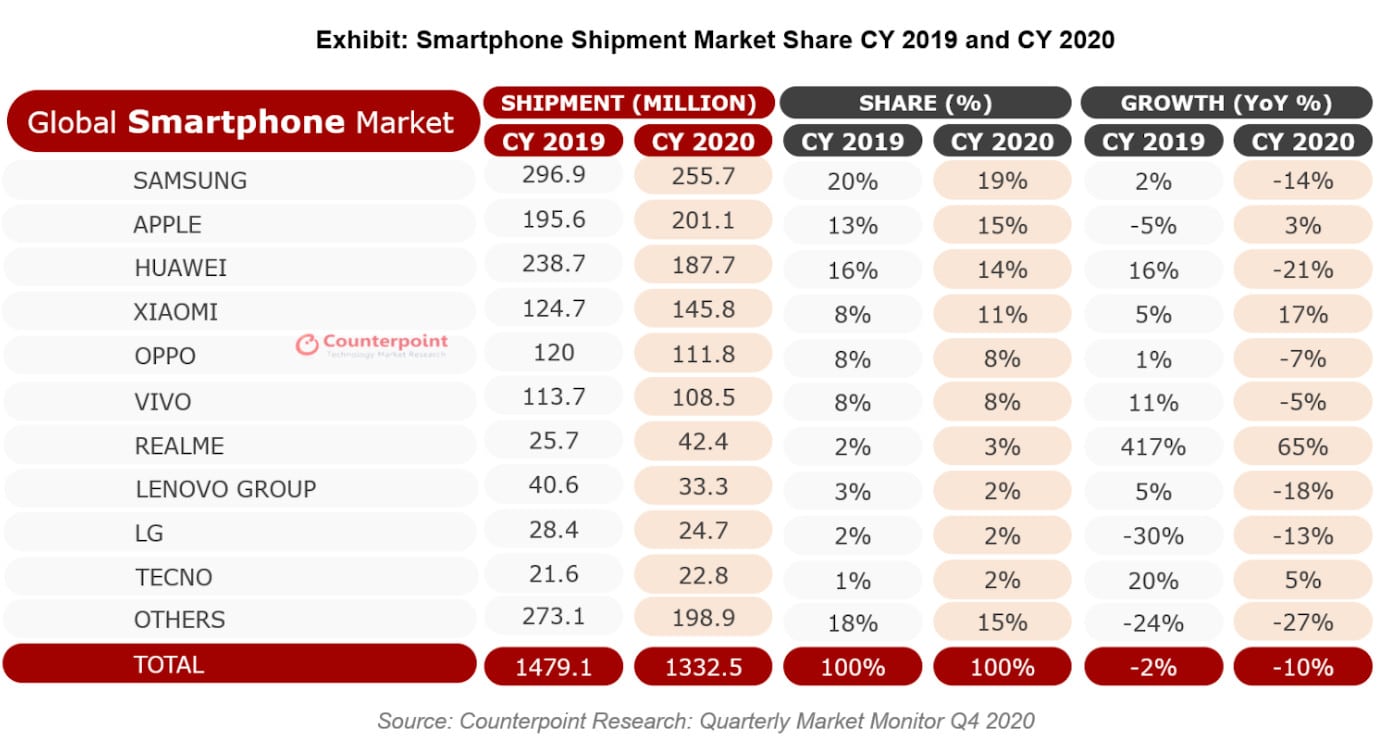 In the second part of the table, we find, in order, Vivo, Realme (with a strong increase of 65% in sales), Lenovo, LG and Tecno. From seventh place (Realme), no brand weighs more than 3% of the market. Lenovo and LG drop significantly by 18% and 13% respectively. LG’s decline is twice as small in 2020 as in 2019.