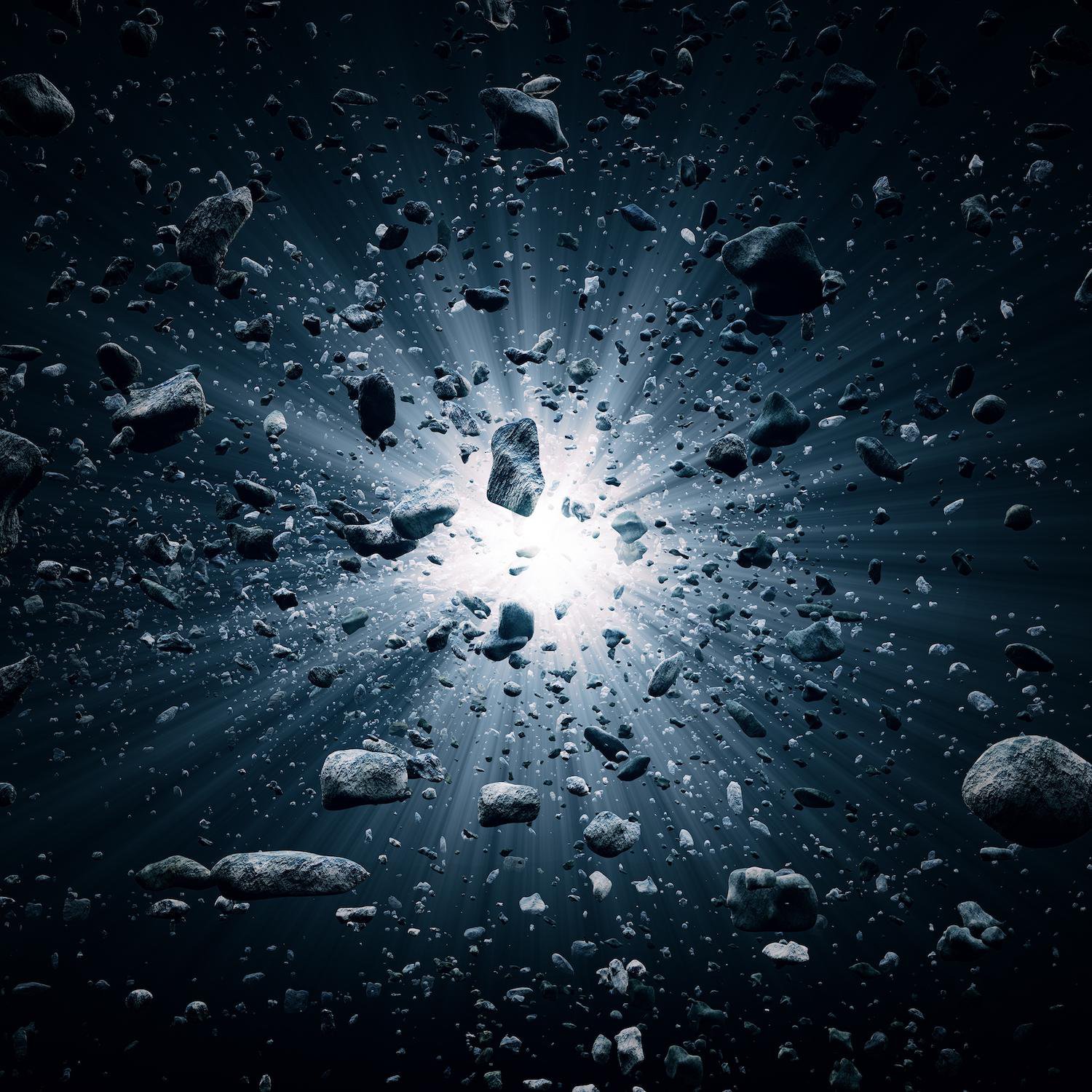 Over the millennia, most of humanity’s great questions have been entirely philosophical. Why do we exist? How did we get here? Where we came from? Where are we going?

For an equal amount of time, the answers raised to these questions were restricted to the fields of myth, theology, fantasy and art.

However, at least in the last 200 years, the collection of these answers has gained additional information that was obtained through the work of a very valuable tool for humanity: science.

Today we know, for example, that the Universe appears to be approximately 13.8 billion years old and that it arose from the expansion of a point of infinite density. We know that the Earth formed about 4.5 billion years ago in a disk of dust and debris around a newly formed Sun.

We even know how our world will end: eventually, sometime in 5 or 6 billion years, the Sun will run out of fuel and enter a red giant phase. In its expansion process, it will encircle the orbit of the nearest planets and turn Earth into an inhospitable, charred lump of rock.

But will the Universe come to an end? Or will it exist forever? If it has an end, what will happen when that moment comes?

These questions are still not fully answered today, even with all the knowledge we have accumulated over the years. However, understanding the final destiny of the Universe is a frontier topic in physical cosmology, whose theoretical background allows describing and evaluating possible scenarios about evolution and about the final episode of the Cosmos.

Since the last century, several possible futures have been predicted by different cosmological hypotheses and models, including those that suggest infinite cosmic duration. To tell a little about these possible futures, we first need to recall two fundamental discoveries about the Universe. 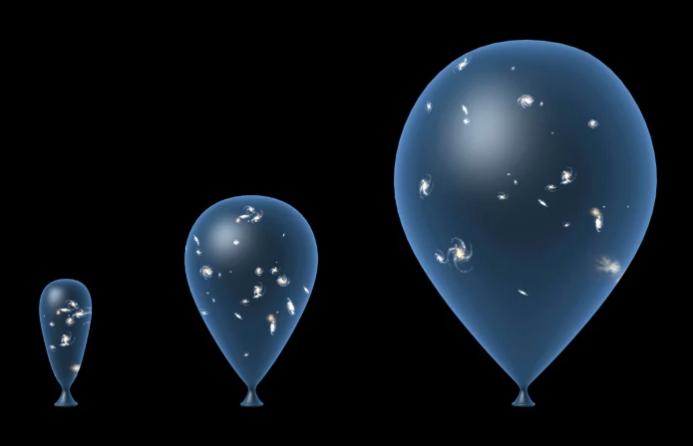 The first of these discoveries was made independently by Edwin Hubble and Georges Lemaître in the late 1920s: they found that the farther they looked into the Universe, the further the galaxies appeared to be moving away from each other. This discovery kick-started the Big Bang theory and means that the Universe is expanding.

The second discovery took place at the end of the 20th century, in 1998, when two groups of astronomers realized that this expansion occurs at an accelerated rate, that is, it gets faster and faster as time passes.

Knowing what the final fate of the Universe will be depends, then, on whether this expansion will continue, if it will accelerate even more or if it will be reversed. Furthermore, in more technical terms, how the Universe will end up also depends on its general geometric shape, how much mass and how much dark energy it contains. 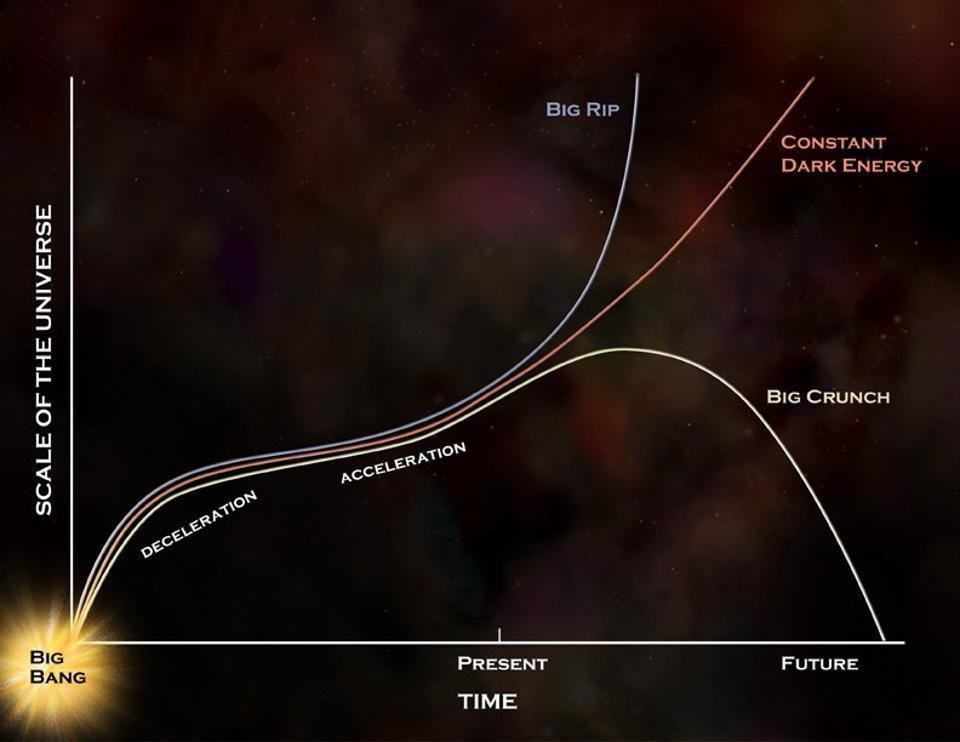 Graphic representation of future scenarios of the Universe.Source: NASA/GSFC

To study these possibilities, cosmologists accelerated the cosmic clock in computer simulations and estimated how the Universe will behave under each of these conditions. Doing this, we arrive at four main scenarios:

1. Thermal death. In this scenario, the Universe would continue to expand and eventually all the stars and galaxies would die and no more would form. The Universe will approach a state of minimum temperature and maximum entropy.

2. Big Rip (or Big Break). It will occur if dark energy accelerates the expansion even more than currently expected. As the Universe expands further and further, gravitational forces would no longer hold galactic clusters together. The stars would be separated and their planetary systems would not be strong enough to stay together. The stars and planets would explode until, finally, the last atoms would be ripped apart and destroyed.

3. Big Crunch. This scenario will occur if the Universe has enough matter for the combined gravitational pull to brake cosmic expansion. In this way, the gravitational pull would get stronger and stronger and would collide and merge the individual galaxies and stars. In the final moments, as the densities and temperatures of successive collisions increased, it would all end up in a single point again. 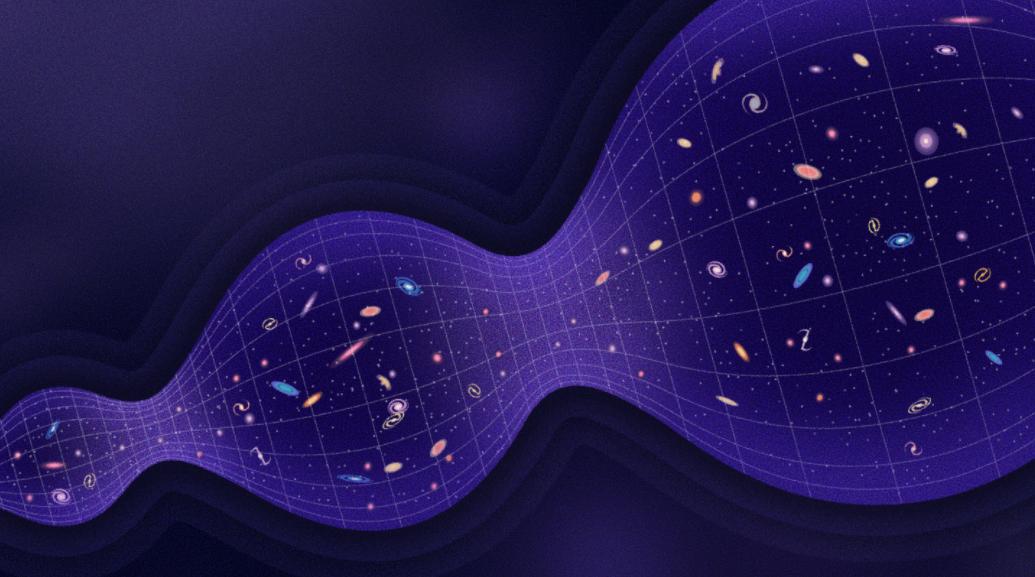 4. Big Bounce (or Big Rebote). This is the model that relates to the very beginning of the Universe. In this scenario, the cosmic end would, in fact, be the consequence of an oscillatory system that would repeat itself cyclically from the Big Bang to the Big Crunch. In it, the emergence of the Universe would be the result of the collapse of a previous universe.

Perhaps it goes without saying, but in the final moments of the Universe in any of these scenarios, life would be impossible and would not exist for a long time. But there’s no reason to worry: none of these scenarios will play out for at least 200 billion years in the future!

Nícolas Oliveiracolumnist for TecMundo, holds a degree in Physics and a master’s degree in Astrophysics. He is a professor and is currently doing his PhD at the National Observatory, working with galaxy clusters. He has experience with Teaching Physics and Astronomy and with research in Extragalactic Astrophysics and Cosmology. He works as a scientific disseminator and communicator, seeking the popularization and democratization of science. Nícolas is present on social media as @nicooliveira_.