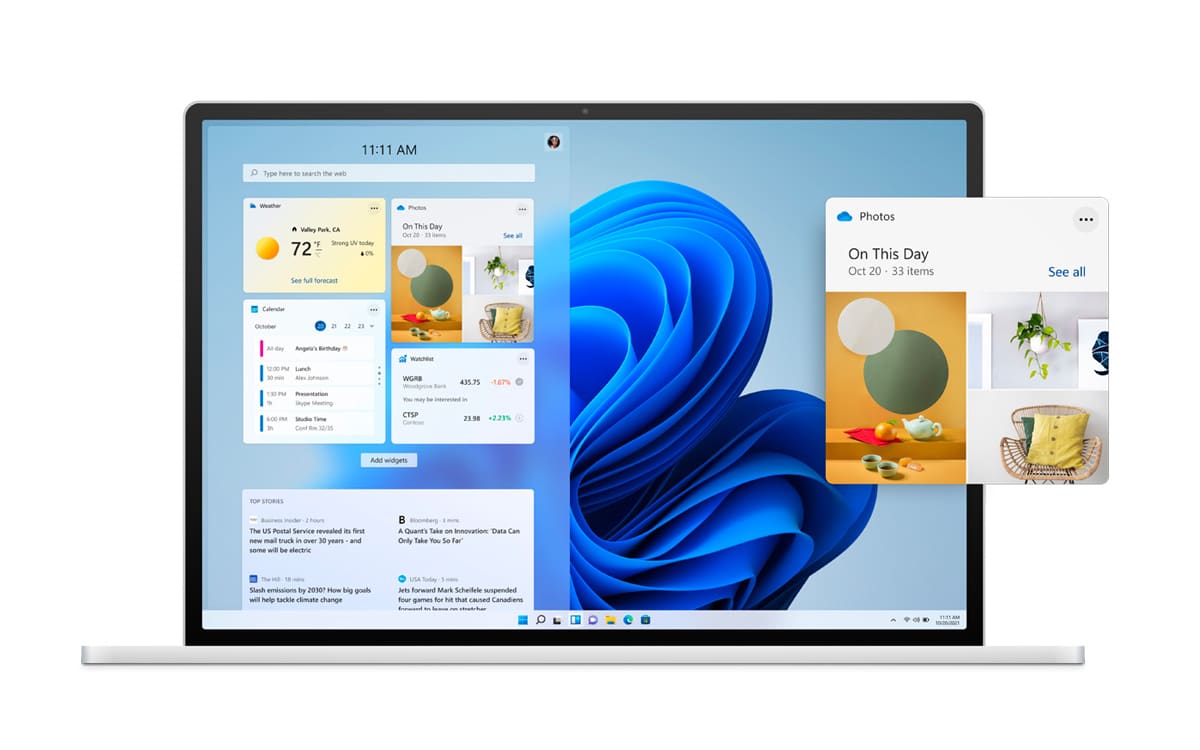 Windows 11 is finally available, but for now, we still have to be content with Preview versions which are not yet quite finished, with inevitably some bugs. We explain in this tutorial how to uninstall the update to go back to Windows 10.

Last week, Microsoft launched the first preview build of Windows 11 to the Insiders of the Developer Channel. Among the new features of Windows 11 we can mention a new design with icons centered in the taskbar, and rounded window and menu corners. The Settings application has benefited from a profound reorganization, Microsoft is also reviewing the design of the Microsoft Store, not to mention the technical novelties which are not necessarily immediately obvious but still improve the behavior of the operating system.

One can for example cite the Dynamic Refresh Rate (DRR) function which adjusts the refresh rate of the screen on PCs equipped with a display compatible with 120 Hz, 240 Hz or higher display to save laptop battery. However, it is basically a beta (even if Microsoft speaks more modestly “preview”), and which says test version, implies that there are still bugs. It is therefore never advisable to install this type of version on a PC that you really use every day..

Windows 11: here’s how to switch back to Windows 10 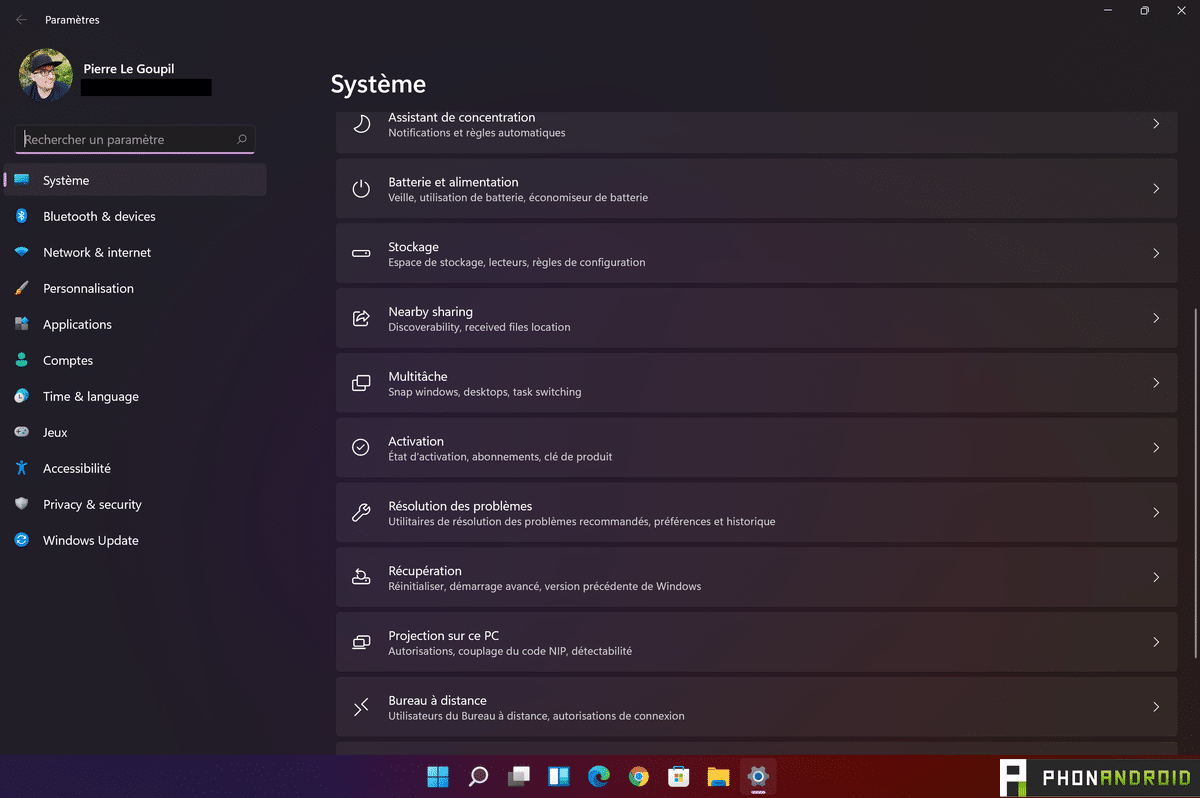 This will undoubtedly not have prevented many Internet users from defying this instruction, before realizing the problem too late. Fortunately, it is possible to go back if you find that Windows 11 is not for you and want to switch back to Windows 10 while waiting for a more stable version. Here’s how to do it: 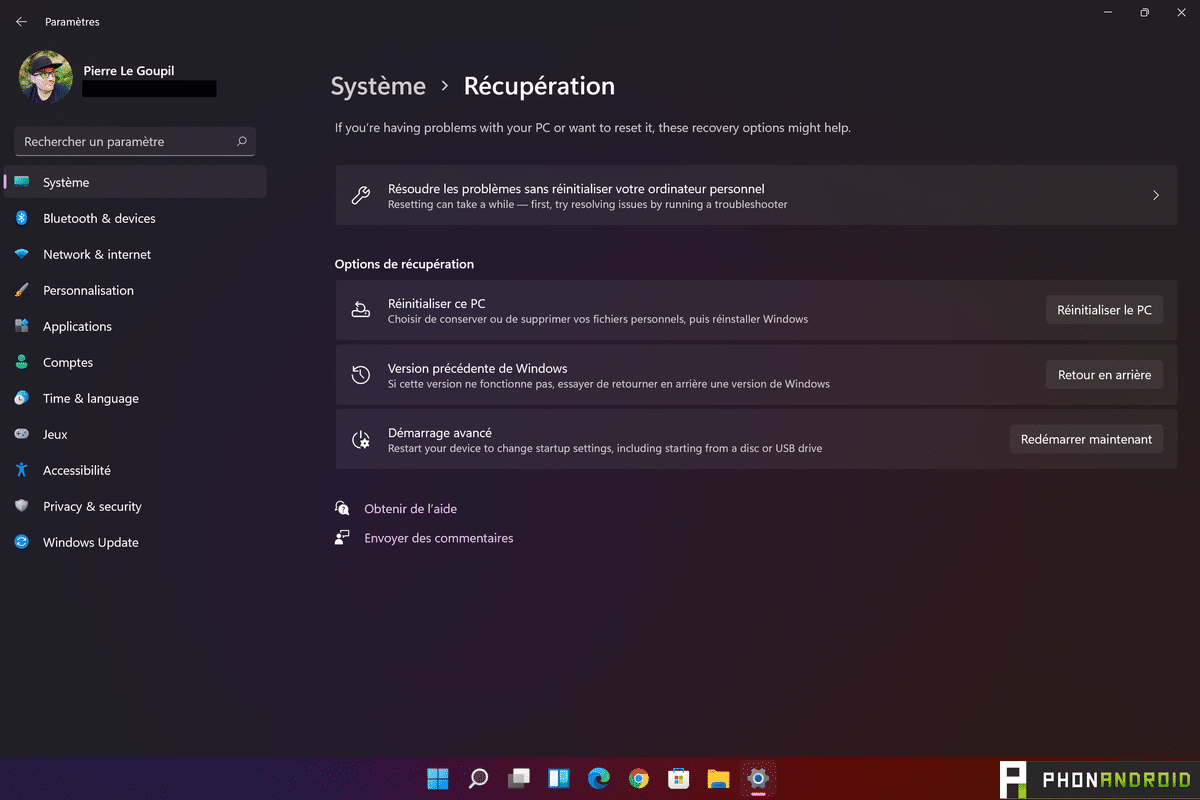 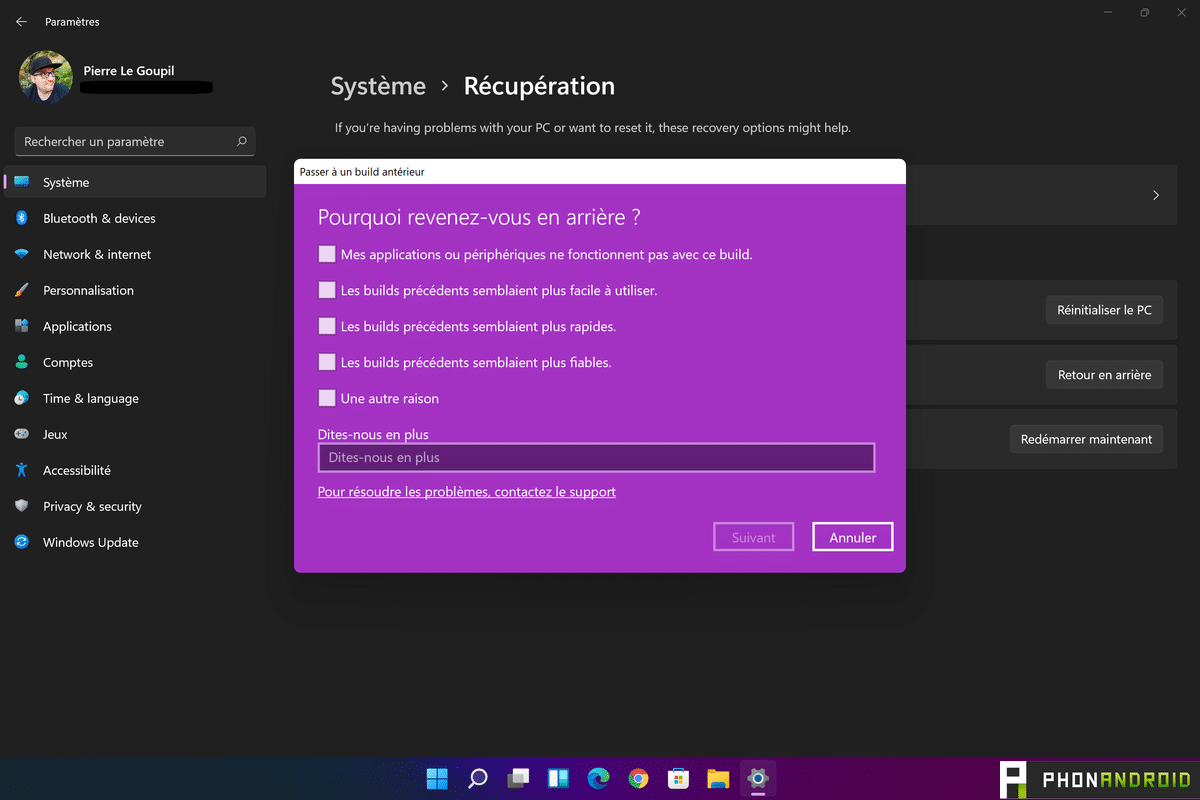 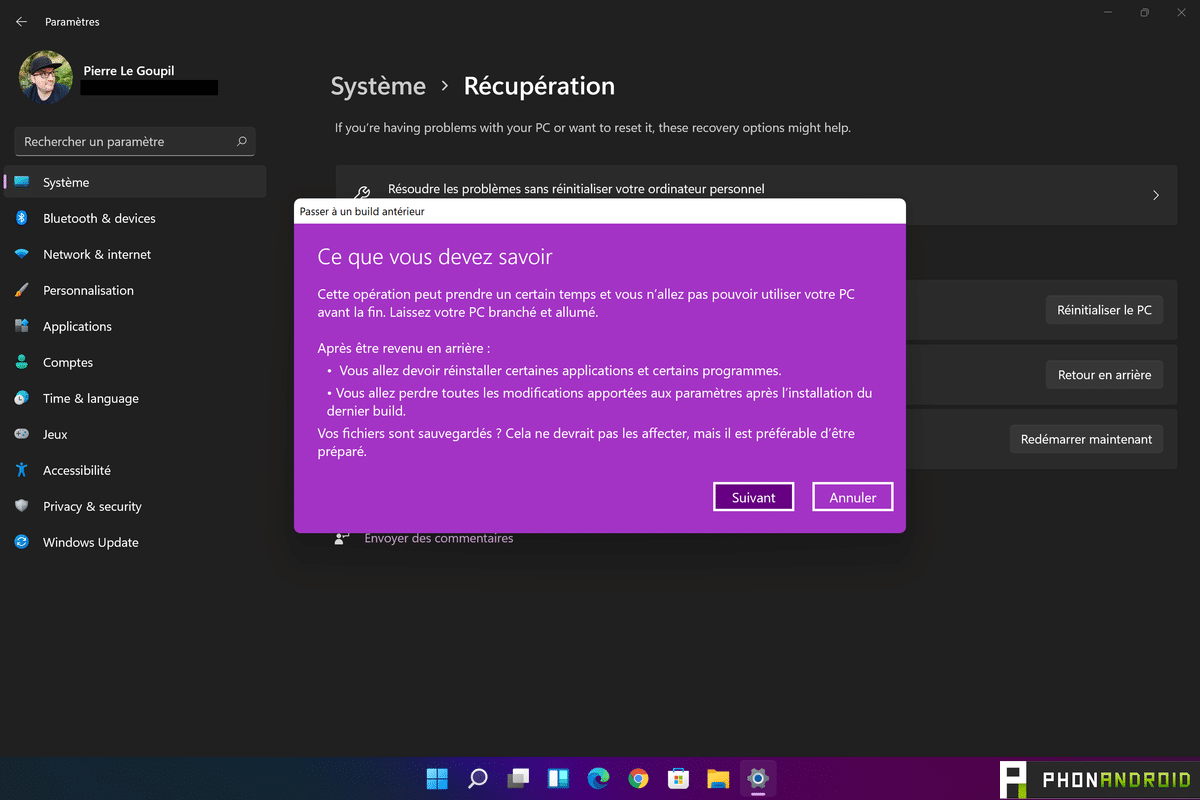 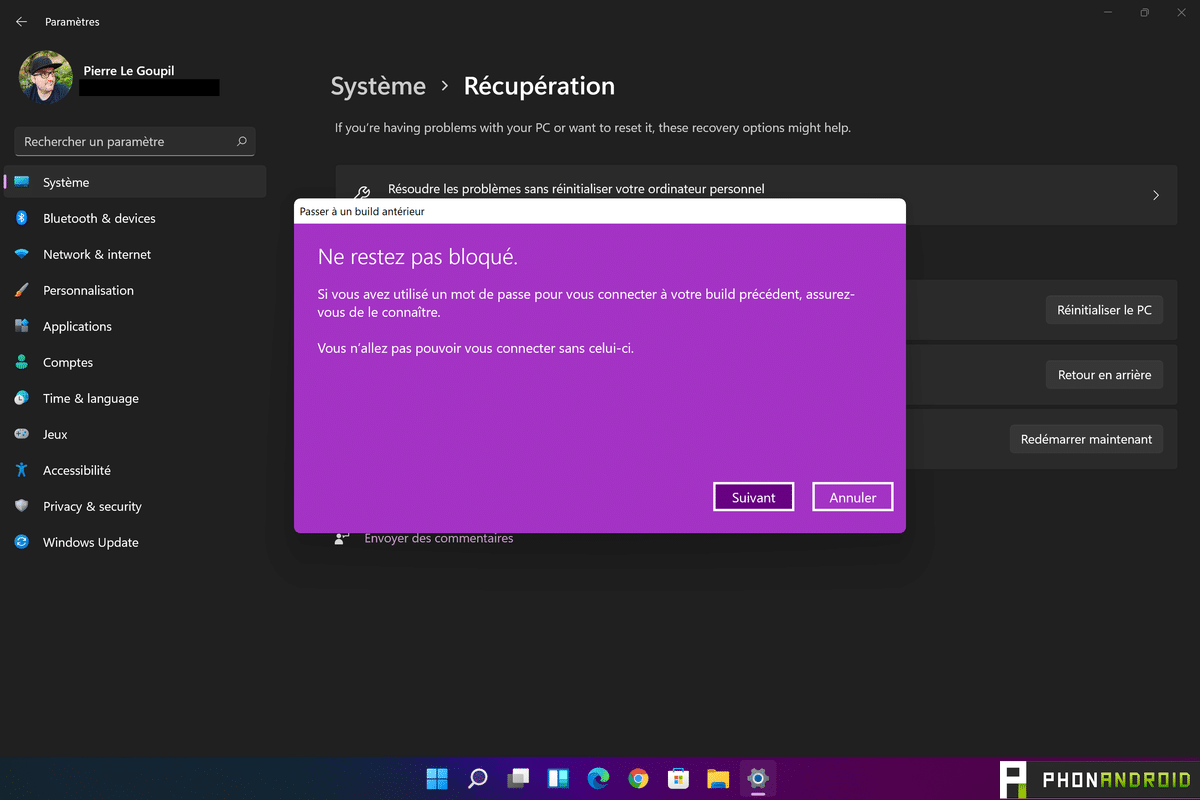 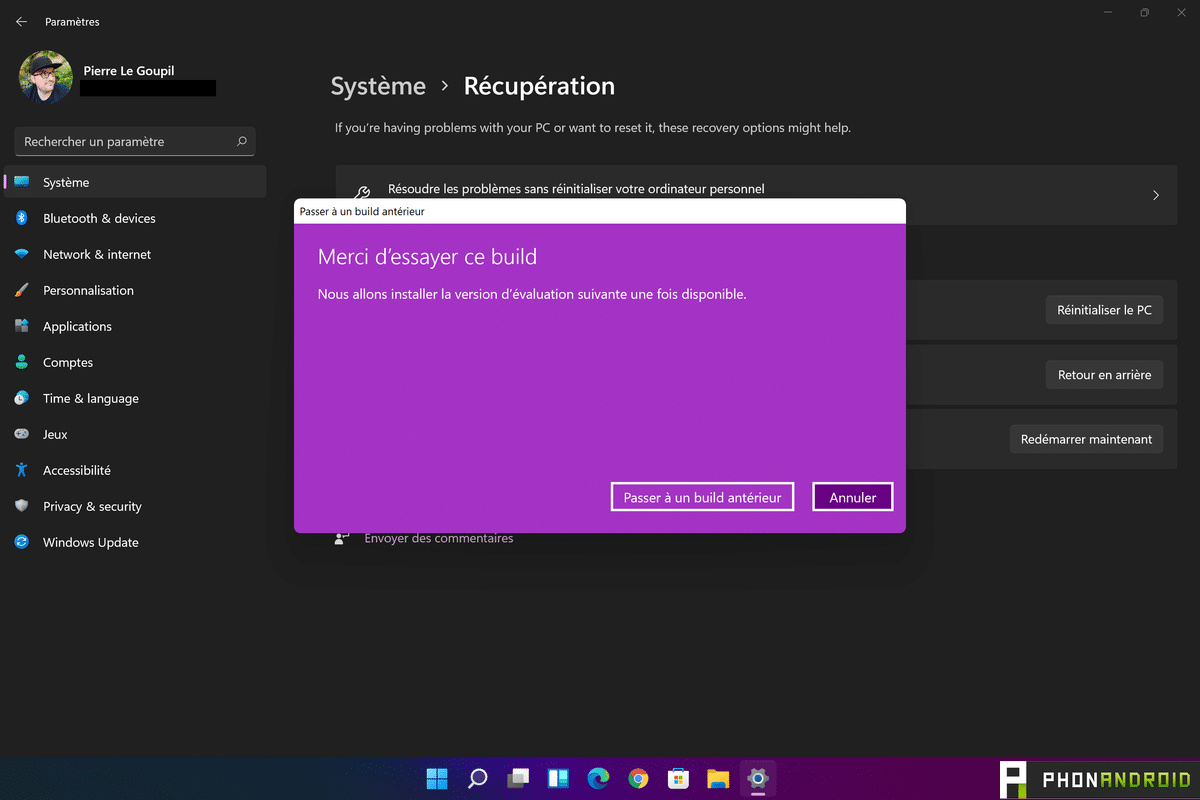 You have now done the hard part. Now you just have to be a little patient. If you’re on a laptop, make sure it’s plugged into a power source. The procedure is indeed intense for the processor, the GPU and the storage space, and it is possible that the autonomy delivered by your battery will not be enough. However, you should know that it is not a disaster if it happens to you.

What if the power is disconnected during the procedure?

It may happen to have a power failure during the procedure. Several somewhat anxiety-provoking screens will tell you that it is important not to disconnect the computer from the power during the entire process. Nevertheless, we know, thanks to the YouTube channel Linus Tech Tips, that protection devices are provided by Microsoft for this scenario.

If the power is disconnected, the system will know during the next restart that a “rollback” procedure was in progress. Depending on its progress, either the procedure itself will be canceled, and you will then have to start this tutorial again, or – and this is what should normally happen in 99% of cases – the procedure will resume as if it was nothing the next time it was started.

Since this situation is foreseen and specially handled by several system devices, there is normally no need to worry.. You will not need to manually reinstall a clean version of Windows 10 after this installation is complete.

Did you find this tutorial useful or have you encountered any difficulties that we did not cover in this tutorial? Do not hesitate to talk about it in the comments! We will take this into account in a future update of this article.