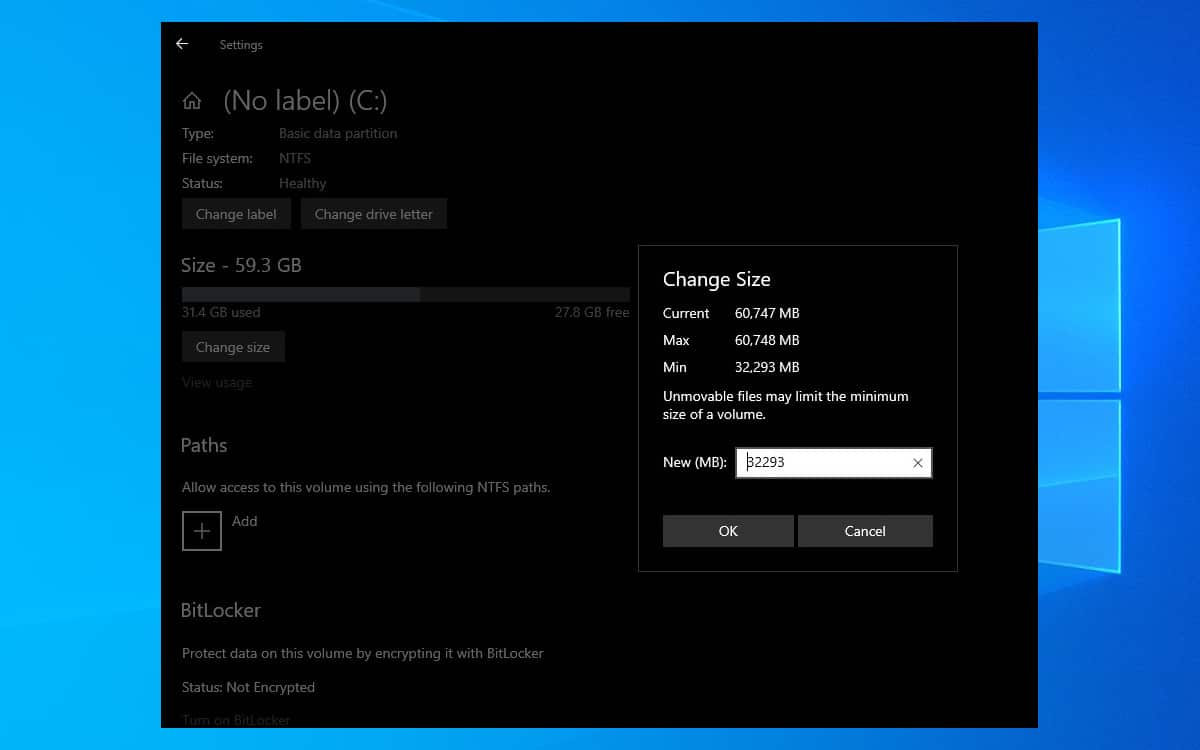 In its latest update released last week, Windows 10 features a new Disk Manager. Currently in beta testing, the tool allows you to resize a partition and manage the drive letter. Here’s how to access this new tool.

In recent years, Microsoft has primed the pump: the Control Panel is gradually giving way to the Settings module, more “modern” (as the editor of Redmond likes to point out) and perhaps more intuitive. One by one, all the tools in the Panel are therefore integrated into the Settings application, so much so that one wonders what will remain in the ancestral Control Panel. In the latest build of Windows 10, which is numbered 20175, this is the disk manager which has a new look and is now integrated into the Parameters module.

A new, more intuitive disk manager, but still in the making

The new storage manager is fairly straightforward at the moment. By clicking on a disc, two options are now available. You can sometimes open Windows 10 File Explorer, sometimes access the properties of the disk in question. It is therefore possible to perform the following operations:

What can you quickly manage your disk units in a faster and more intuitive way than using the old disk manager? We will leave you the sole judge. As explained in the preamble, the management possibilities are currently very sketchy. To compare, the classic manager allows you to erase a partition, format it, convert a drive to a dynamic disk or GPT, etc.. Options that are still missing from the new disk manager. Microsoft has not yet officially communicated on this new feature, we can bet that this is a preview and that it will be enriched in the coming months.

Read also: Microsoft finally fixes a big bug in the management of the hard disk of Windows 10

This new option is currently intended for users of the Windows Insider program. Remember that the latter allows you to preview all the new features of Windows 10. As it is a beta-test program, and because of its unstable nature, we recommend that you install this type of version of Windows 10 in a virtual environment or on a second partition of your configuration.

To access the new Disk Manager, do the following:

Note that this new option is being deployed. Even if you have already installed Build 20175, it may not appear right away. Wait a few hours and days, you should see it appear. At worst, remember that Microsoft releases a new Build every week or so. If the new Disk Manager is not yet accessible from your setup, it should be available during the next update.

It’s a fact, Windows 10’s Control Panel is really giving way to the Settings tool. This does not mean that the Panel will disappear entirely, but that almost all of its functionality is now accessible from the Settings module. Eventually, Microsoft may reserve the Control Panel for the more seasoned OS users, and it may be hidden from the general public. In any case, this is implied by the recent “eviction” of the System function from the Control Panel, in favor of its equivalent in the Settings module. Unless the Panel is completely removed from the home version of Windows 10 and is intended for the professional edition, who knows?