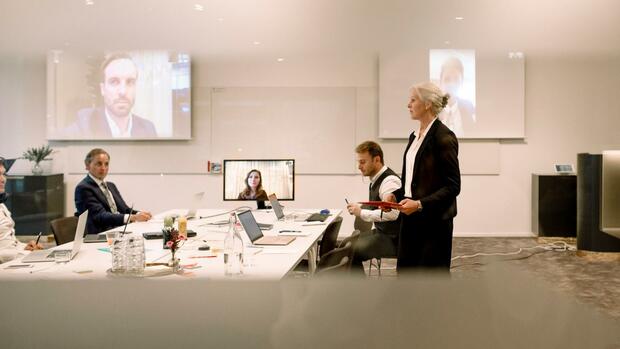 Cologne Andreas Steck was the first to touch the buttons at Linklaters. The firm had called for the video music project “Jams from Home” in the corona crisis, and the senior partner of the firm in Germany was not asked for long. At the piano at home in Wiesbaden, Steck accompanied a young associate who started Elton John’s “Your Song”. Since the premiere of the office manager on March 21, Linklaters has made nine further appearances. “The music project was a great success. It impressively underlines the spirit in our law firm and brings us all a little bit closer together, ”says Steck.

The outbreak of the corona virus has messed up a lot in the world of business lawyers. The lawyers are used to being on the go all the time. They negotiate mergers and acquisitions, organize IPOs and financings or arrange private equity investments. The business is mostly international, and their law firms either have offices in many countries or are part of a cross-border alliance. The years of economic upturn brought the specialists record sales and growing profits and salaries every year. The mood in the industry was magnificent.

Then Corona came. Since public life in Germany was severely restricted on March 23, 2020, the economy has also been in a state of shock. With the crisis, IPOs burst and company acquisitions, court and arbitration proceedings were put on hold, meetings and conferences canceled. Some business lawyers were barely in demand, others all the more.

The corona virus has forced all business lawyers to work differently than before. The frequent flyer days are over for now, instead of marathon negotiations in high-rise office buildings, there are now video conferences from the home office. The exceptional situation has hardly harmed the cohesion of the lawyers. On the contrary: Many law firm managers sound surprisingly positive, like Steck from Linklaters: “As a law firm, the situation even brought us closer together in a special way. At the moment we are all equidistant from each other across countries, locations and teams, namely exactly one mouse click. ”

With 77 offices in almost all regions of the world, competitor Baker & McKenzie is one of the world’s largest law firms, with more than 200 lawyers working for Baker in Germany alone. Here, too, the changeover went largely smoothly. “The video conference systems installed worldwide allow us to speak and advise our clients as usual across multiple time zones and national borders,” says Managing Partner Matthias Scholz.

More environmental protection thanks to Corona

This will also change a lot at Baker & McKenzie in the future. “We have recognized that the technological infrastructure and processes are in place to provide our work and client support regardless of our location,” says Scholz. A new balance between presence and virtual workplace will be found – also in order to sustainably reduce your own carbon footprint in times of climate change. The motto is: save costs and protect the environment.


The current Handelsblatt edition is based on the 12th edition of the Best Lawyers Rating. In Germany, the US publishing house identified the most renowned legal advisors in an extensive peer-to-peer procedure exclusively for the Handelsblatt. In this process, lawyers are asked which competitors they can recommend.

The result is a comprehensive overview of the “Law Firms of 2020” and the “Best Lawyers of 2020”. Lawyers with a particularly outstanding reputation can be found among the “Lawyers of 2020”.

The pandemic is rapidly changing the world of business lawyers. “The corona crisis has certainly significantly accelerated some important digitization projects that were planned in-house and were already well on their way,” reports Alexander Schwarz, co-managing partner of Gleiss Lutz. Gleiss is represented in six German cities and has an office in Brussels. In mid-March, over 600 employees were sent to the home office almost overnight – and that smoothly. “We and our employees will continue to benefit from the measures implemented here in the future,” says Schwarz.

According to Schwarz, the crisis at Gleiss Lutz has so far done no damage to business. According to Schwarz, the law firm based in Stuttgart benefits from its full-service approach. This means that the law firm covers a wide range of legal areas. In the first few weeks, the new legal regulations to mitigate the consequences of the corona crisis ensured additional mandates.

At Gleiss Lutz there were orders in new consulting fields. “This particularly concerned questions about the implementation of the new legal framework, questions about state aid, restructuring and insolvency issues, as well as, of course, labor law issues or, for example, data protection issues,” says Schwarz. Even the M&A business is now picking up again. Gleiss Lutz sees itself on a good course, even if it is too early to fully assess the consequences for the 2020 financial year.

The optimism of most law firm managers sounds almost unreal at this time. While there are new bad news from business every day, most law firms are doing well. The all-rounders in particular are currently at an advantage. As with Gleiss Lutz, losses in certain practices are compensated for by additional orders in other practices.

No layoffs, no short-time work

Competitor CMS Hasche Sigle is the largest law firm in Germany in terms of the number of lawyers. With around 550 professionals, the company recently generated sales of over 320 million euros. Although CMS is not one of the most profitable law firms in Germany, it is represented at all important locations and advises the entire spectrum of the German economy, from small and medium-sized companies to international groups.

CMS ‘order books are also full in the fields of finance and labor law. The issue of short-time work is of great concern to many clients, and job cuts are on the agenda. In addition, many companies have to reorganize their financing, often with government aid. “Our broad positioning in different business areas has proven itself on the market and especially in the crisis,” says Hubertus Kolster, Managing Partner of CMS Germany. The declines in the transaction and project business were not completely, but almost completely offset.

In terms of personnel, the crisis passed the large law firm almost without a trace. “We have not made any layoffs or cut wages, and they are not planned,” says Kolster. He sees savings opportunities elsewhere – for example in new room concepts, i.e. reduced office space, and in the travel budget. “We found that every business trip is not absolutely necessary and that appointments or meetings with several participants can be organized digitally. We therefore anticipate a reduction in travel activities, ”says Kolster.

The traditional law firm Oppenhoff & Partner with its headquarters in Cologne and offices in Frankfurt and Hamburg is also relaxed. Oppenhoff quickly formed a Corona task force to support clients in the crisis right from the start. The labor and contract lawyers had more to do than before the crisis, as did the restructuring and insolvency experts. “The M&A business has declined, but that’s no reason for us to make adjustments. There are no plans for this either, ”Managing Partner Gilbert Wurth draws an interim conclusion.

Most law firms are relaxed, but it is far from clear what the final bill will look like. Ultimately, commercial law firms are also somewhat dependent on economic developments.

The economic damage caused by Corona is huge. The Council of Experts most recently forecast a 6.5 percent slump in growth for 2020. Afterwards, the economies expect a recovery, but the outlook is uncertain. The risk is too great that a possible second wave of infection will cause a new break-in. It is foreseeable that such a setback would also hit commercial law firms hard.

Some law firms are already taking precautionary measures. Linklaters, for example, has decided to hold back the quarterly distribution for June for the time being. Freshfields Bruckhaus Deringer already has a number of savings measures in place. The law firm with the highest turnover in Germany has postponed partner withdrawals, postponed decisions on bonus payments and freezed salaries.

There are also cuts in other law firms. As the branch service Juve reports, Norton Rose Fulbright asked its employees to reduce working hours. Reed Smith will significantly reduce distributions to partners. Taylor Wessing caused a sensation with a special measure: the law firm quit all academic staff in response to the corona crisis.