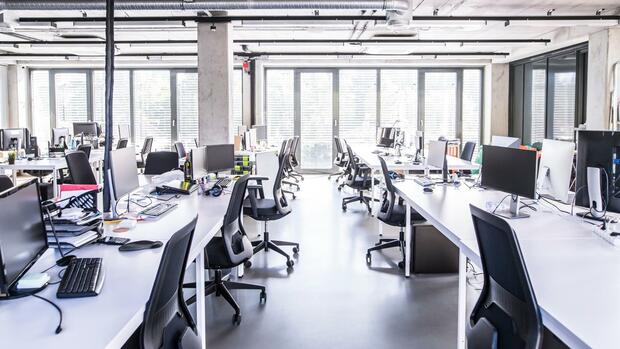 Dusseldorf When Frank Karcher starts his working day, he has to queue up recently. For a few days now, more and more colleagues have been waiting in front of the four elevators of the Frankfurt exhibition tower that take him to the 16th floor.

Firstly, because due to the hygiene regulations, only two instead of the usual ten people are allowed to use an elevator. But also because a number of employees from the home office return to one of the 64 floors of the office tower in the banking district – like the employees of the global IT consultancy Tata Consultancy Services. Karcher is the head of human resources there and responsible for 2000 employees of the Indian group in Germany.

After almost the entire TCS workforce worked in the home office after the shutdown, the attendance lists in the office are now getting longer again. Almost a tenth of the consultants are back. “We are not putting any pressure on, but we are prepared for about a quarter of the workforce to be back soon,” says Karcher. What motivates many of the colleagues to drive to the office voluntarily: “We want to meet again in person.”

Like the TCS consultants, many managers and employees are homesick for the company. Half of the employees want to go back to the office to see their colleagues again, a survey by the Korn Ferry consultancy shows, which is available to the Handelsblatt in advance. Understandable: You want to see what is going on in the company again personally. And if it is only the information that the printer in the secretariat is still on strike.

As fast as the retreat to the home office worked, as fast as home work for millions became everyday life – the return is now so complicated. Chefs and Corona task forces work on hygiene plans, measure distances between office chairs and divide employees into groups.

The Corona study by the University of Mannheim suggests that more and more companies are pushing their return. Just under five percent are currently working at home permanently, at the height of the crisis it was more than 30 percent.

Legally, it is permitted for companies to order their employees back to the office. Industrial psychologist Hannes Zacher also thinks this is correct from a scientific point of view. “Companies should not leave their employees at home in a permanent exceptional state.” Research shows that employees become dissatisfied, unproductive and unmotivated if they are not allowed to come to the office at all, says the expert at the University of Leipzig.

Despite return: It will not be the same as before the pandemic. 89 percent of executives expect home office regulations to increase, according to the manager’s barometer from the consulting firm Odgers Berndtson. What will become established: that some of the employees work in the office – and the rest at home. For just under a fifth, this is already the new normal, the long-term survey by the University of Mannheim shows.

But how do companies organize new everyday life – and what do managers and employees have to prepare for? Three practical examples.

Cutting discs at the dining table

The new normal is always present in the Bayer canteen.

At the latest in the canteen, Bayer returnees are aware of the new normal: you can only see the person opposite you at the tables through a transparent partition. “You have to speak a little louder to understand each other, but it works,” says Kai van Laak. The person responsible for health and safety at work is well established and works at headquarters again a few days a week.

Van Laak coordinates the return to work for all Bayer employees worldwide – based on a multi-stage plan. At the beginning of June, in phase one, 15 percent were allowed back. “First of all, we made it possible for those who did not have good working conditions at home to return.”

Phase two has been in effect since this Monday: A maximum of 40 percent can go back to the office. In a corporation, it is difficult to control the upper limit centrally. At Bayer, it is the responsibility of the individual team leaders to ensure that not too many go to work.

Phase three depends on developments in the pandemic. “We are in no hurry, health protection is a top priority,” says van Laak. Nobody is forced into the office, although there are advantages to coming in from time to time to strengthen interpersonal relationships, says the 59-year-old.

The chemical company’s approach is exemplary for experts. “A return in stages takes away the fear of rapid changes from the employees,” says industrial psychologist Zacher. He advises managers to have a return interview so that they can work through the past few weeks, get a personal picture – and be able to present the new hygiene rules.

of employees want to go back to the office to meet their colleagues. (Source: Korn Ferry)

That’s the way it works at Bayer. All returnees must confirm the instruction in four basic rules by signature on their first day. Most important measure: If you have symptoms, you have to stay at home, as indicated by signs at the entrances.

In the building, employees have to keep a distance of two meters, even on the way to the printer or in the canteen everyone is required to wear a mouth-and-nose cover. Bayer sent four fabric masks to each employee. Last but not least: wash your hands regularly.

If you have any questions, there is a Corona representative at every location. Answers can also be found on the intranet. Bayer has set up a portal that provides information about security measures and the development of the pandemic. “We have found that regular communication is the most important thing,” says van Laak.

Laura Jacob agrees with this. The EY partner advises companies on their return. Especially when parts of the workforce work at home and others in the office, managers have to make sure that everyone is aware of the agreements – regardless of whether they are new projects or information about the order and financial situation.

“Transparency is essential,” says Jacob. She advises executives on video messages or regular virtual question times to keep everyone up to date.

Grover: return to a new culture

The crisis has changed his attitude towards home office.

At the beginning of the year, Michael Cassau would not have said such a phrase: “There is no reason for a technology company to work exclusively in the office.” Cassau is the boss of the Berlin start-up Grover, which offers cell phones, laptops or projectors for rent. Before the crisis, the 35-year-old wanted his employees to come to the office, there were only two home office days a month.

“I believed that the majority of the corporate culture was based on daily interaction in the office.” After weeks of working from home due to the crisis, Cassau is now smarter: whether you do your job well does not depend on how long you stay in the office, but how the output is great. And that is also possible at home.

Not only at Grover, the crisis has given the company boss a new stance. This is a blessing for convinced homeworkers: home office is no longer equated with laziness – as some managers did before the crisis. According to the Odgers-Berndtson manager barometer, around half of the managers were even more efficient in their home office.

Nevertheless, half of the over 120 employees at Grover can come to the office. They identify who works where using the Slack chat tool. This is what everyday life will look like in the future: Those who work on projects with colleagues come to the office. If you want to focus, stay at home. Everyone should work where they are most productive. “This gives employees a sense of self-determination and helps them to motivate themselves better,” says psychologist Zacher.

Start-up boss Cassau now perceives the office differently: “It is no longer just a place to work, but a place to meet.” One thing is already certain: every day at work – no one at Grover has to do that anymore. It is different with the tech giants Apple and Google: they announced that they would enable home offices by the end of the year, and Twitter even “forever”.

Not without an ulterior motive: companies can save enormous costs through their home office because they need less office space. Abolish the office? Cassau does not want to go that far, personal exchange is too important to him. But in the future, he plans less office space. The actually planned move to a larger building: postponed.

Employees long back to the office.

In the middle of the pandemic, the TSC consultants have cloned with the American astronaut Ron Garan. He told them about the narrowness on the ISS space station via live stream. With this special campaign, TSC wanted to get the individual out of isolation, to help employees exchange ideas and develop cohesion despite the distance.

These measures are exemplary for experts: “If you don’t manage to create team spirit, you’ll get a mercenary force,” warns Jutta Rump. The professor of business administration heads the Institute for Work Organization & Employability (IBE) in Ludwigshafen.

The crisis shows that employers will have to take even greater care of their employees’ mental wellbeing in the future. Especially when companies have had positive experiences with the home office and there are fewer real meetings at work in the future. Shared virtual breakfast breaks or cocktail evenings after work are part of the new normal.

But not every employee copes with the new situation so well. The workforce fluctuates between two extremes: While some rave about freedom in the home office, others are overwhelmed by the great responsibility. Experts warn to make this state a taboo. “The support from the manager now has to be very individual,” says EY consultant Jacob.

Those who fail to create team spirit get a mercenary force. Jutta Rump (Director of the Institute for Work Organization & Employability)

She advises managers to “let employees shape their new normal”. Many have already demonstrated a high degree of self-organization in the pandemic. It is sufficient if superiors only set framework conditions for projects, but leave the specific design to their team. The motto: more personal responsibility, less micromanagement. Jacob: “That makes leadership work effective.”

There is no complete return to the office for TCS either. By 2025 at the latest, employees should only spend a maximum of a quarter of their time in the office. The rest is with the customer or in the home office – just as you like. A positive side effect: the morning queues in front of the elevators of the Frankfurt exhibition tower will probably not be that long anymore.

More: Do you have to go back to the office now? – That’s what labor law says