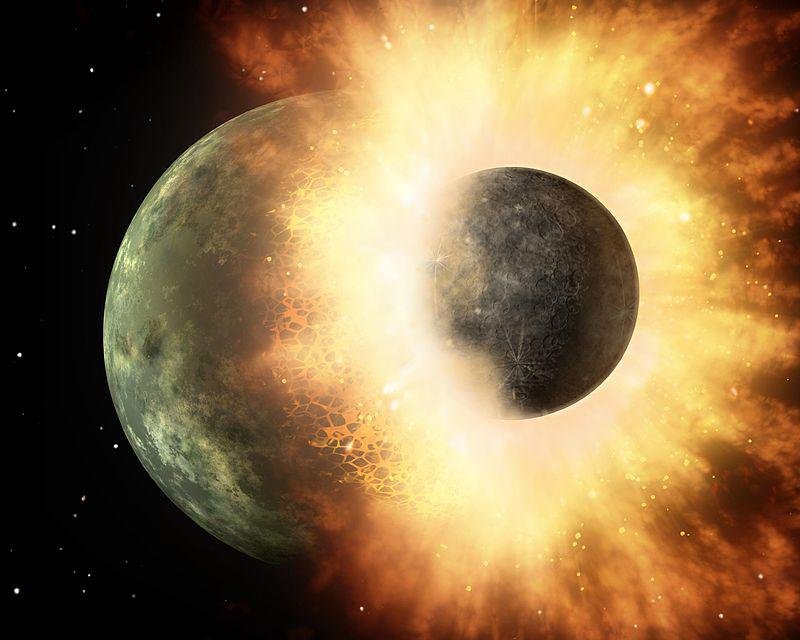 Throughout human history, from ancient times long before the invention of telescopes, the Moon has been an invitation to look up.

The natural contrast of the brightness of its surface with the darkness of the night sky has been the subject of countless stories, poems, songs and declarations of love over the centuries. However, in addition to artistic expression, for most of that time the Moon was also an enigma to our intellect.

What really is this illuminated sphere? What is it made of? What are the irregular, dark spots we see on it? What mechanism governs the pattern of sunlight reflection on its surface throughout the month? How did it come about? 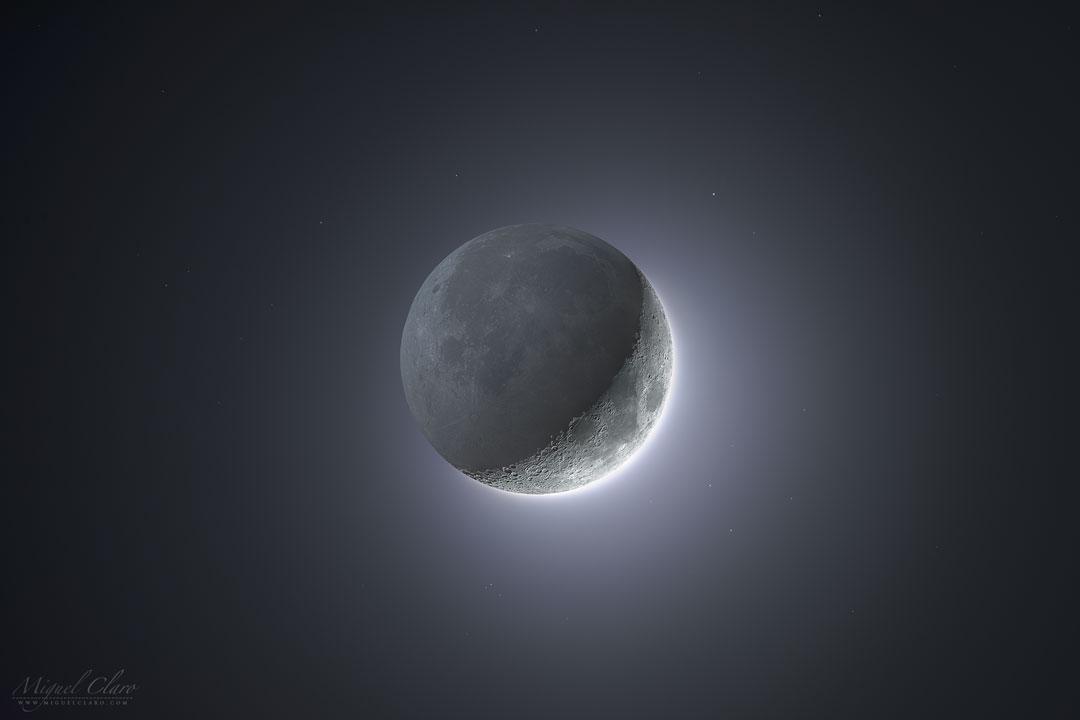 Initial answers to these questions are born when the human intellect was still largely populated by magical and mythological thinking. The world’s culture and folklore is full of moon dwellers, common men and noble princesses, gods, dragons and other fantastical creatures. There are even those who say that it is made of cheese.

However, only after the invention of the first telescopes and the application of their use to celestial observation, made for the first time by the famous Italian astronomer, Galileo Galilei (1564 – 1642), many of these puzzles started to be answered also within a scientific perspective.

The Moon is our only natural satellite and one of the largest in the Solar System, occupying the prestigious fifth position in size. Although it does not have its own luminosity, after the Sun, it is the brightest celestial object to our eyes, precisely because it reflects sunlight on its surface. The dark patches on its soil are volcanic seas filled with mountains and prominent impact craters. 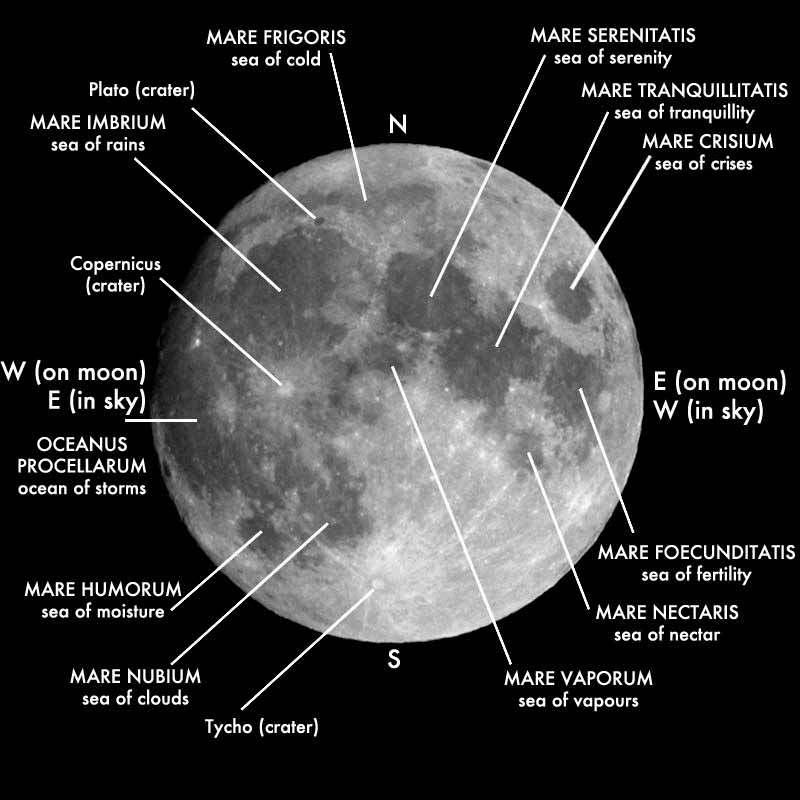 The main lunar seas on the visible face of the MoonFonte: Tau? Olunga/English-language Wikipedia

It’s also the only place off Earth where humans have ever set foot, an impressive feat for our species. Space programs originating in the historical context of the Cold War were responsible for bringing the first unmanned instrument there in 1959 (by the Soviet Union’s Luna Program), peaked in the first manned landing in 1969 (by NASA’s Apollo 11 mission ) and continue to develop and deploy space probes today.

The Moon’s formation history dates back to the beginnings of the Solar System itself. Soon after the sun began to shine, rocky and gaseous planets also began to form. However, it took about 50 million years from that initial moment for the Moon to come into the picture. Regarding the details of this history, several mechanisms have been proposed to explain the lunar formation, but three hypotheses figure as the main ones: the co-formation hypothesis, the capture hypothesis and the great impact hypothesis. 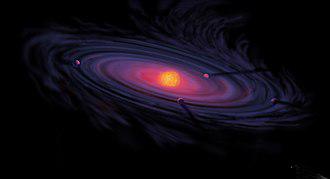 The co-formation hypothesis, as indicated by its name, is a theoretical model that claims that the Moon and Earth formed at the same time in the protoplanetary disk. The particles that originated both would then have condensed at approximately the same instant, forming the two bodies with previously established orbital dynamics. According to this model, the Moon would have a composition very similar to the Earth, which is true, as both share, in essence, the same material. However, the Moon is significantly less dense than our planet, which probably wouldn’t be the case if they both started with the same class of heavy elements at their core.

The capture hypothesis states that the Moon was an “errant body” that was trapped by Earth’s gravity, similar to other moons in the Solar System, such as the two Martian moons, Phobos and Deimos. According to this hypothesis, a rocky body formed anywhere could have been placed in orbit around the Earth, which could explain the differences in density of the two, but not the similar chemical composition between them. Furthermore, the Moon is almost perfectly spherical, which makes this hypothesis difficult for astronomers to accept, as most “errant” celestial bodies are irregular in shape.

Although these two hypotheses are valid and explain some observed and analyzed aspects of the Moon, both leave a series of questions open, which brings us to the last and best accepted hypothesis of lunar formation. 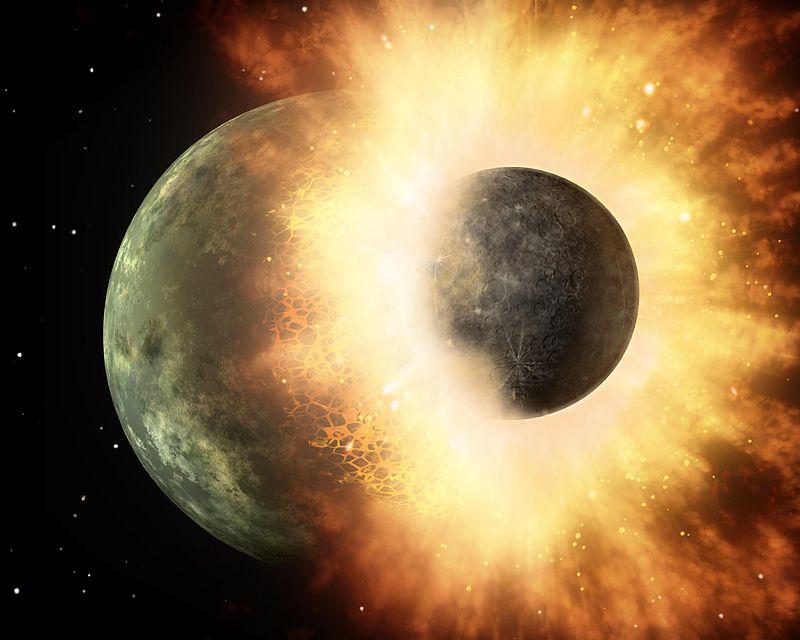 Artistic conception of the collision between Earth and Theia.Source: NASA/JPL

The currently prevailing model, the large impact hypothesis, suggests that the Moon formed violently when a planetary-sized object called Theia collided with the early Earth. The result of this catastrophic impact projected material from both bodies that coalesced to form the Moon.

However, the big impact hypothesis also has its challenges. Most computer models along this line suggest that more than 60% of the Moon should be made up of Theia material. But, as we said, in terms of composition, the Earth and Moon are almost twins: their compositions differ by at most a few parts in a million.

These and other questions will be answered as new lunar soil samples are analyzed, as these results can yield new answers that tend to further solidify our understanding of how the celestial wonder closest to us came to be.

Nicolas Oliveira, columnist of TechWorld, has a degree in Physics and a Master in Astrophysics. He is a professor and is currently doing a doctorate at the National Observatory, working with galaxy clusters. He has experience in Physics and Astronomy Teaching and with research in Extragalactic Astrophysics and Cosmology. It acts as a scientific communicator and disseminator, seeking the popularization and democratization of science. Nícolas is present on social networks as @nicooliveira_.