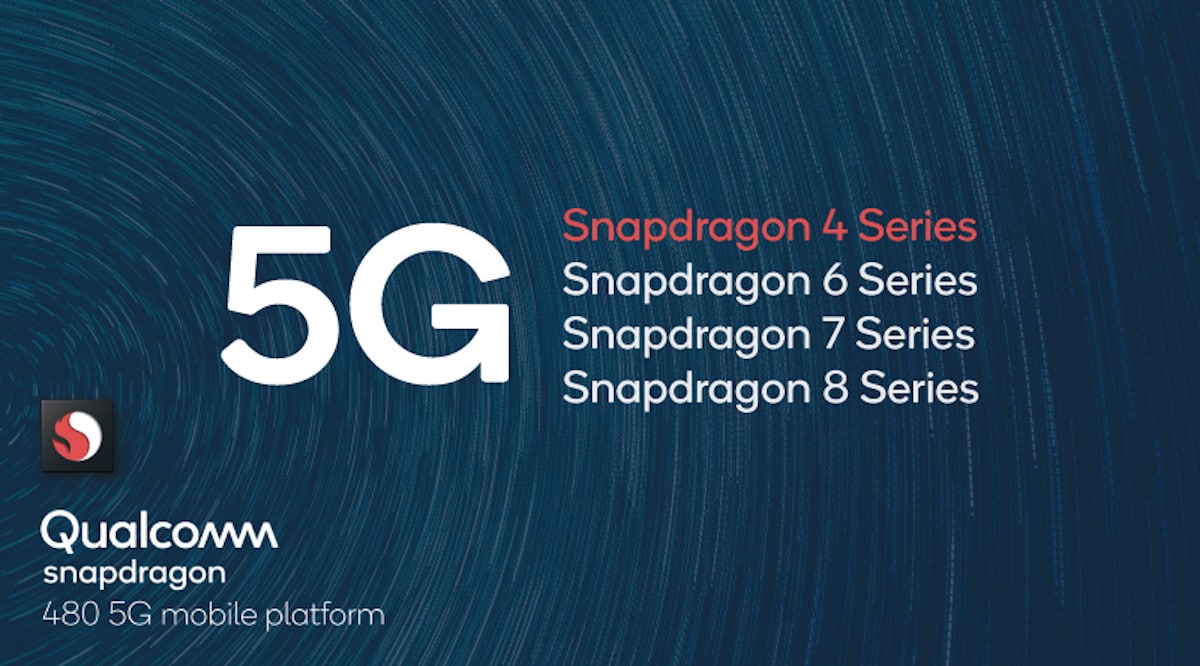 Qualcomm introduces a new SoC: the Snapdragon 480. It is the first 5G component of the Snapdragon 400 family. This means that it is the most affordable 5G SoC in the catalog of the Californian founder. The promise is simple: to democratize access to 5G by 2021. The Snapdragon 480 also brings a considerable gain in terms of performance compared to the Snapdragon 460.

The democratization of 5G will begin with the design of affordable compatible components. To be convinced, just look back at all the technologies embedded in an entry-level smartphone: notch or hole screen, 4G + modem, double or triple photo sensor, battery with fast charge, etc. It will therefore be the same for 5G.

Qualcomm took a big step forward this week with the introduction of the Snapdragon 480. This is the first component of the Snapdragon 400 family to integrate a 5G modem, here a Snapdragon X51. Remember that the 400 series drives a large number of entry-level phones. The latest model, the Snapdragon 460, released in early 2020, powers the OnePlus Nord N100, the Vivo Y20s, the Oppo A53, the Nokia 3.4 or the Motorola E7 Plus. That phones sold around 200 euros.

The Snapdragon 480 therefore takes over and becomes, logically, the cheapest 5G component among the Snapdragon. This means that the price of access to a 5G platform will drop drastically. Previously, Qualcomm’s cheapest 5G SoC was the Snapdragon 690, a 5G SoC released in mid-2020. You find it in the OnePlus Nord N10 5G and the Nokia 7.3, for example. They are rather sold around 300-350 euros. Phones running Snapdragon 480 should therefore be cheaper. This is great news.

The Snapdragon 480 and Snapdragon 690 merger is not trivial. The two components are indeed technically quite similar. The architecture is the same. The modem is identical. The fineness of the engraving is equal. In its press release, Qualcomm explains that the Snapdragon 480 shows a strong improvement in processor and GPU performance (+ 100%), as well as a drastic drop in power consumption.

Let’s go into the detail of the configuration. The Snapdragon 480 is engraved in 8 nm. It integrates eight application cores. Two Kryo 460 Gold (derived from Cortex-A77) clocked at 2 GHz and six Kryo 460 Silver (derived from Cortex-A55) clocked at 1.8 GHz. We are on almost the same configuration as that of the Snapdragon 690, except that the cores of the latter are called the Kryo 560 and they should be a little more powerful.

The graphics part is supported by a Adreno 619, the same component that you find in the Snapdragon 750 for example. It is capable of handling Full HD + screens with a refresh rate of 120 Hz. On the artificial intelligence side, Qualcomm has chosen to integrate a Hexagon 686, a slightly less ambitious model than the Hexagon 692 of the Snapdragon 690.

5G modem, fast charging, and photos up to 64 megapixels

The SoC will be 5G compatible, thanks to the modem Snapdragon X51 (same as SD690). It supports frequencies below 6 GHz and millimeter frequencies. It is 4G compatible (LTE category 15 with 800 Mb / s download speed), WiFi 6, Bluetooth 5.1 and NFC. SoC is also compatible Quick Charge 4+. It is the first of the Snapdragon 400 series to take advantage of it.

On the photo side, the Snapdragon 480 incorporates the image processor Spectra 345, capable of handling up to three channels. It supports sensors with a definition of 64 megapixels maximum in single configuration and 25 megapixels in dual configuration. He films in 1080p at 60 frames per second and slow motion mode goes up to 120 fps at 720p. It also handles double or triple video signals (up to 30 frames per second).

The Snapdragon 480 therefore promises very decent performance for 5G smartphones positioned below the 300 euros mark. So it’s no wonder that it piques the interest of brands like Vivo, Oppo and Nokia (HMD Global) which are cited in the press release. The first deliveries of the component are scheduled for the very beginning of 2021. This means that the first equipped smartphones should be formalized in the spring of 2021 for a commercial launch at the end of the first half of the year approximately. We obviously can’t wait to see how much these phones will sell for.