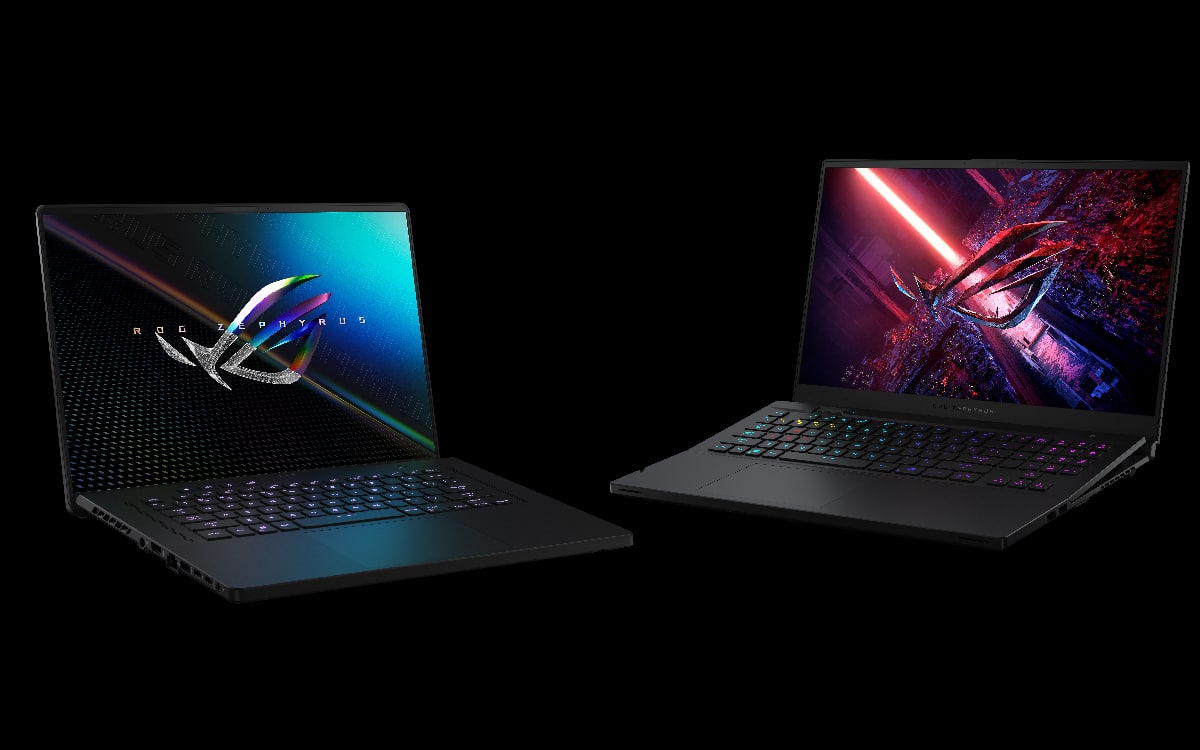 Asus officially presents the Zephyrus M16 and Zephyrus S17, its two new gaming-focused laptops. In their top-of-the-range model, they both offer the latest generation Intel processors. The M16 benefits from the Geforce RTX 3070, while the S17 offers the RTX 3080.

Today, Asus unveils two new high-end laptops: Zephyrus M16 and Zephyrus S17. From Republic of Gamer, these two titans offer all the gear you need to play in the best possible conditions, plus portability.

They are each powered by the latest generation of Intel processors, in their most optimized version. To accompany it, the Zephyrus M16 is equipped with the Geforce RTX 3070, while the Zephyrus S17 embeds the RTX 3080, two ultra powerful graphics cards.

The Zephyrus M16 is efficient in all areas: creation, video editing and, of course, gaming. For this, the RTX 3070 gives it all the power it needs while maintaining its slim design. His 48 GB DDR4 RAM allow it to perform many tasks simultaneously. Two SSDs, one of which is 2 TB, can store a lot of data needed for game and other applications. To boost its performance, Asus has equipped the PC with its patented cooling system, which lowers the CPU temperature by 10 ° C compared to the competition.

The Zephyrus M16 features a screen of 16 inch which is based on a chassis 5% thinner than last year’s model, for a screen-to-body ratio of 94%. His refresh rate of 165 Hz promises quality precision, coupled with WQHD resolution and a response time of 3 ms that make it possible to see the smallest details, in addition to leaving more space for menus, taskbars and other display elements.

All this does not come at the sacrifice of portability, since the PC only measures 19.9 mm wide for a weight of 1.9 kg. It also embeds 4 Thunderbolt ports compatible with 4K at 60 Hz. There is also a USB-C port as well as a USB-A port to connect all types of peripherals. Finally, the Ethernet port allows you to enjoy an optimal Internet connection for online gaming sessions.

The Zephyrus M16 will be available during the third quarter from 1799 €.

Like its colleague, the Zephyrus S17 offers an 11th generation Intel processor accompanied by 48 GB DDR4 RAM. Small improvement in the GPU on the other hand, since it takes advantage of the Geforce RTX 3080. Thanks to its cooling system, the graphics card reaches a clock frequency of 1545 MHz for a power of 115 W, 140 W in boost. Its two PCIe 4.0 and 3.0 SSDs allow data transfer at a speed of 10.5 GB / s.

The Sephyrus S17 takes advantage a 17-inch immersive screen, also with a response time of 3 ms and a refresh rate of 165 Hz. A second option is available for purchase, this time with a 4K display with a refresh rate of 120 Hz. The first option, on the other hand, displays a WQHD resolution.

The PC also offers a 5 ° curved keyboard to add more convenience to use. Asus says this position makes it easier to find the right key, in addition to eliminating almost any reset delay: it just takes 0.2 ms to rebound to its correct position. The space for the touchpad has also been optimized, since the latter is 125% larger than that of the previous generation.