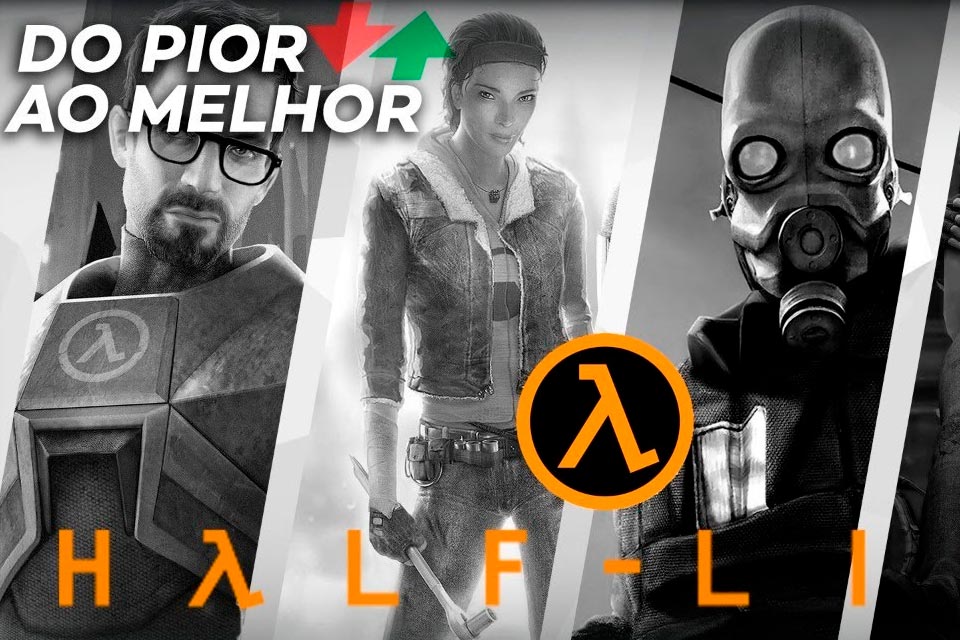 It’s not everyday that you can talk about masterpieces, about games that revolutionized the market, about titles that dictated trends that continue until today and will hardly be changed. Well, I can safely say that today is one of those days!

The only problem with all this is that Valve doesn’t know how to count to 3! You asked, voted and here’s the one from Worst to Best in the franchise half-life. Here are our criteria, pay close attention:

Launched in 2006, Half-Life 2: Episode One continues the events of the second game in the series, following Gordon Freeman and Alyx Vance as they seek to escape City 17 before an explosion destroys everything in their path, focusing on their relationship along the way. Several familiar characters are present, such as Eli Vance, Dog and the mysterious G-Man.

Structurally, the gameplay is like its predecessors: first person shooter with challenging combat and physics-based puzzles. Among the differences and new features are the change from the first crowbar weapon to the Gravity Gun and an Alyx AI upgrade that best complements Freeman’s abilities.

The game was a success, being praised by reviewers for its fast and lively pace, the team dynamics with her companion, the incredible script with spectacular dialogue and the very high quality acting at a Hollywood level. Already the criticisms were for its short duration of approximately 5 hours and the lack of new multiplayer content. Your grade is 87.

Thirdly, we have Half-Life 2: Episode Two, released in 2007. Before talking about the game, it’s worth mentioning that a trilogy of episodes was planned, but Valve doesn’t know how to count to three and canceled not only the third episode but all projects for half-life that were in development.

Going down in the story, Gordon Freeman and his ally Alyx Vance are together traveling through the mountains around City 17 towards an endurance base, this after the events of the previous game.

Like its predecessor, its structure is unoriginal, but the game has a greater focus on open areas, use of vehicles, such as a heavily modified Dodge Charger, an original enemy called Hunter and the famous Gravity Gun, a gravitational weapon that can catch and manipulate objects in the air to solve puzzles or even kill opponents.

The game was praised for its visual improvements, large environment full of variety, fun story and clever level design, but criticized for its short six-hour duration, almost the same as its predecessor. Your grade is 90.

Tied for second place, we have Half-Life 2, released in 2004. The game takes place approximately 20 years after the events of its predecessor, with Gordon Freeman on his way to City 17 after the Black Mesa incident attracted the attention of the multidimensional Combine empire.

The game’s great advantage is the Source graphics engine, which significantly improved the graphics. Besides, the physics of the title is a detailed simulation of the real one, which will be used in many puzzles and can be used in combat. A very interesting fact is that the player can control Freeman at all times, as there are no pre-rendered events and cutscenes that take away the power of its controller. And, as I couldn’t forget, it was in this game that we were introduced to Gravity Gun.

The idea of ​​Gabe Newell, president of Valve, was to create an experience that would redefine the FPS genre, defining that developers would have the time needed to create the title, without any deadlines.

And we can say that the goal was successfully achieved. The title was acclaimed, receiving 39 Game of the Year awards. The accolades were due to the improved graphics and physics, whether on PC or consoles (through The Orange Box), bringing something unique and magical to gamers. Your grade is 93.

Half-Life: Alyx, released in 2020, arrived after a hiatus of 13 years from the franchise and brought two big differences: it is a game in Virtual Reality, the famous VR, and has as protagonist Alyx Vance, who even gives its name to the title.

The events take place five years before the second game, with young Alyx stealing resources from the Combine empire, which has taken over planet Earth, for her father and the resistance, having to fight soldiers and aliens along the way.

Instead of the Gravity Gun, the player uses gravity gloves, gloves that can pull and throw items. The idea of ​​the title was to be one of the biggest and best VR experiences on the market, bringing realism and creativity to the use of the device, as well as a great freedom to interact with the world.

The title has full integration with Valve Index, which is described by many as one of the best virtual reality glasses on the market, but it can also be played with devices from other brands such as Oculus Quest and HTC Vive.

Its development began at the beginning of 2018, with a team of 80 people that included the employees of Campo Santo, developer of firewatch which was purchased in 2018, but the project was discredited by developers, including the choice of virtual reality as the platform for the game.

Fortunately, they bit their tongue as Half-Life: Alyx has become one of the most important games for the VR world, even winning Game of the Year awards by various media outlets. The game was praised for the mechanics that overvalue the virtual reality device, the fun and intuitive Gravity Gloves, the wide variety of puzzles and the gigantic accessibility options, but criticized for some strange aspects in combat and problems in interacting with the environment. Your grade is also 93.

And we come to the origin of the series, the title that revolutionized the FPS and the entire video game market. Taking the gold medal, we have half-life, released in 1998. This, which was the first game developed by Valve, follows scientist Gordon Freeman, who must escape from the Black Mesa Research Facility building after it is invaded by aliens.

Unlike many first-person shooters released earlier, half-life it is not a shooting gallery, but rather an immersive experience, as commented by Gabe Newell in an interview at the time.

Gameplay is divided into puzzle, exploration and combat, sometimes against humans and sometimes against aliens. The game relies on scripted sequences instead of just throwing enemies in our faces over and over, bringing interactions with different characters that tell more about that world and what’s going on. Also, as mentioned earlier, the game does not take control of the player at these times, being possible to move freely during the entire duration of the title.

It also has an online multiplayer with modes like deathmatch. Among the thousands of players who created mods for it, we have Minh “Gooseman” Le and Jess Cliffe who were responsible for such a Counter-Strike, do you know?

Going back to the first half-life, we can say that it was a complete and absolute success, both in criticism and in sales. Analysts said that this was the best shooter since Doom, being praised for its innovations, realism, immersion and interaction with environments, being rated to date as one of the best and most influential games ever released. Your grade is 96.