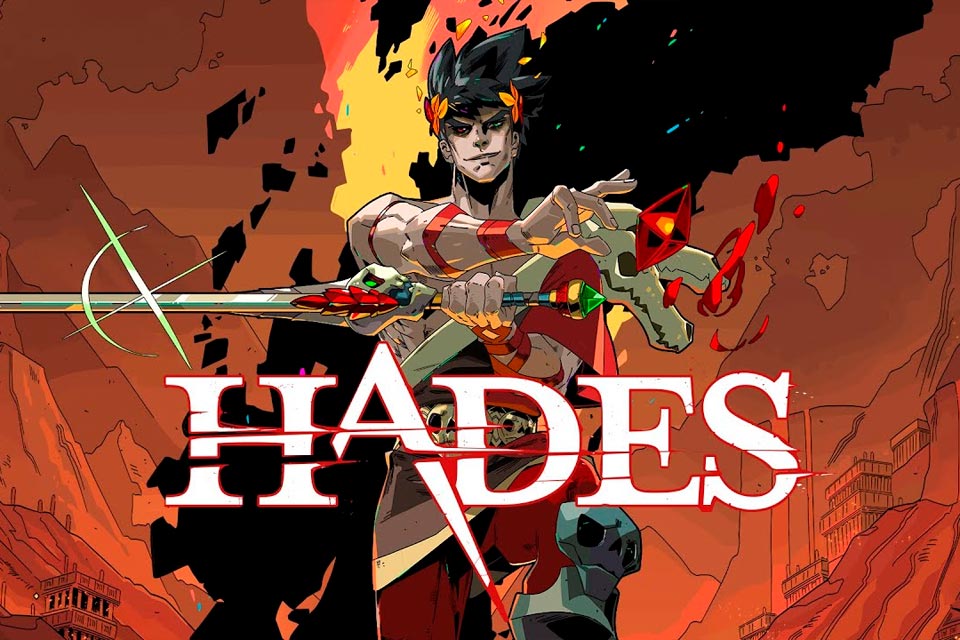 After bastion, Transistor and Pyre, Supergiant Games proved to be an extremely solid independent developer that was ready to take new flights and make a name for itself in industry history. This new stage started with the announcement and launch of Hades in early access at the end of 2018. Since then, the company has won dozens of awards related to direction, gameplay, art and soundtrack, in addition to competing for the “Game of the Year” at The Game Awards 2020.

All this, together with several recommendations from friends and colleagues, aroused a great interest in the title. With over 60 hours of gameplay on PC and a few more on PS4, which will be reviewed today, is it really all that they say?

from hell to olympus

Being a rogue-Lite, the player is expected to die many times before reaching the end of Hades, but the impressive thing is how the whole story revolves around these deaths, developing after each one of them.

We control Zagreus, son of the Greek god of the dead Hades, whose goal is to get out of the underworld. For this, he will count on the help of his Olympian relatives who will send blessings to facilitate his journey, as his father insisted on preparing the various rooms that lead to the exit with powerful enemies. And, as if that wasn’t enough, these rooms reorganize themselves, which demands attention and preparation from Zagreus.

Hades arguing with Nix about the Olympian gods.Source:  Voxel

Whenever he dies, the player returns to the Hall of Hades, where he can interact with locals such as the chthonic goddess Nix, her son Hypnos, the warrior Achilles and even the three-headed porter dog Cerberus. They’ll talk to you about your escapades, how your last kill was, and other information that will explain more of the context of what’s going on.

I take this moment to say that the script is extremely intelligent, with three-dimensional characters, well-defined personalities, credible motivations and natural dialogues, making it difficult not to identify with them or even love most of them.

An example is how the posture of Zagreus talking to his father and his master Achilles are very different, showing the respect and admiration he has (or not) for each of them. Another example, which always amuses me, is when the characters react to their blessings or their weapons, which made me see them as active members of that universe, not just passive ones. 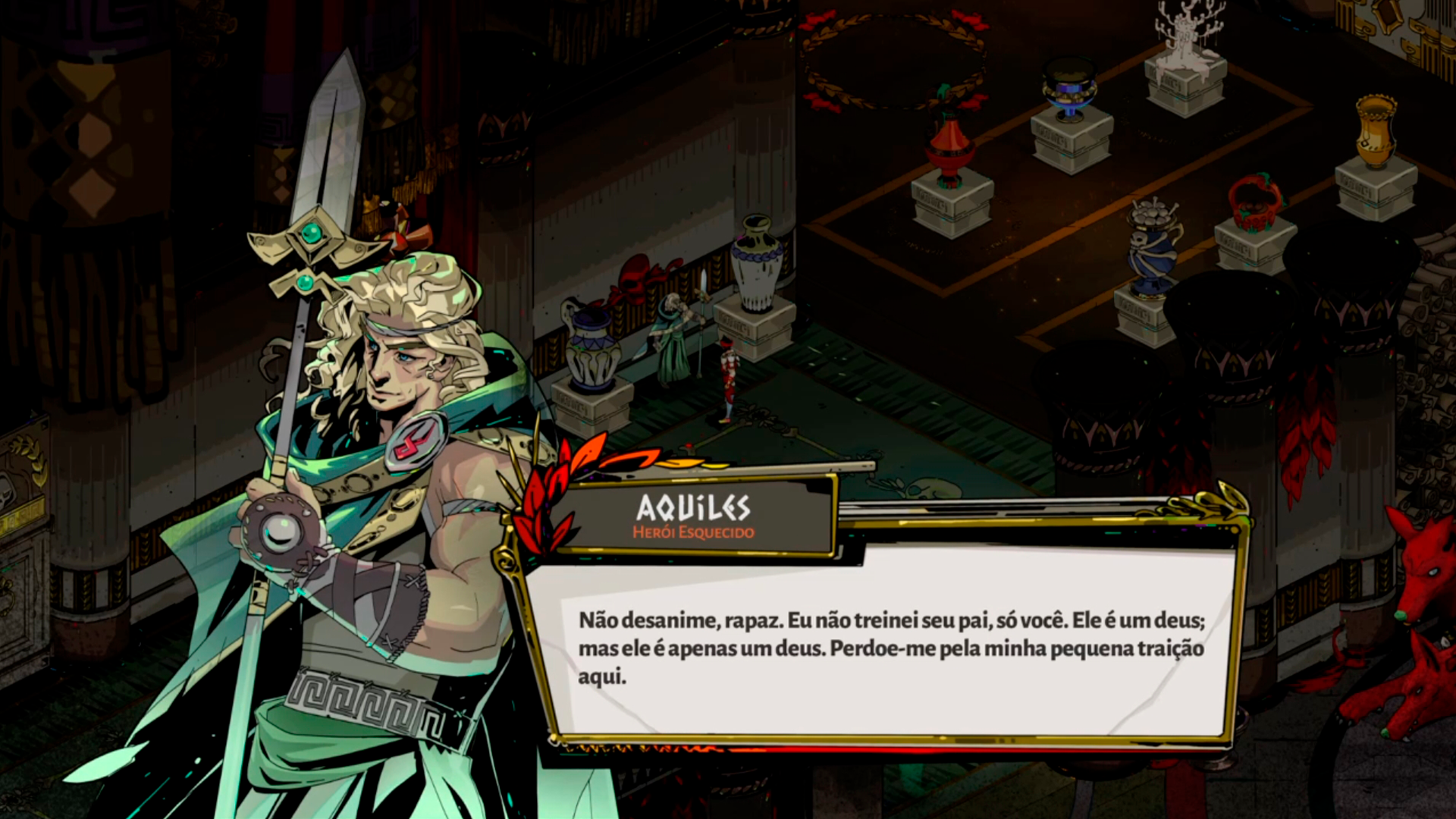 Repeating the beginning of the previous item, you will die a lot. You will be cut, pushed, arrowed and even burned, but you will never be left with a sense of injustice, learning from your mistakes and understanding patterns that will make your next attempt better than the last.

Combat is not a “do it this way or learn by dying” thing, but it is open to other people’s styles. I love to confront opponents, dashing at them and beating them as hard as possible, but whoever is a little more cautious or even prefers long-distance combat will find themselves here, but not without succumbing many times to find out. 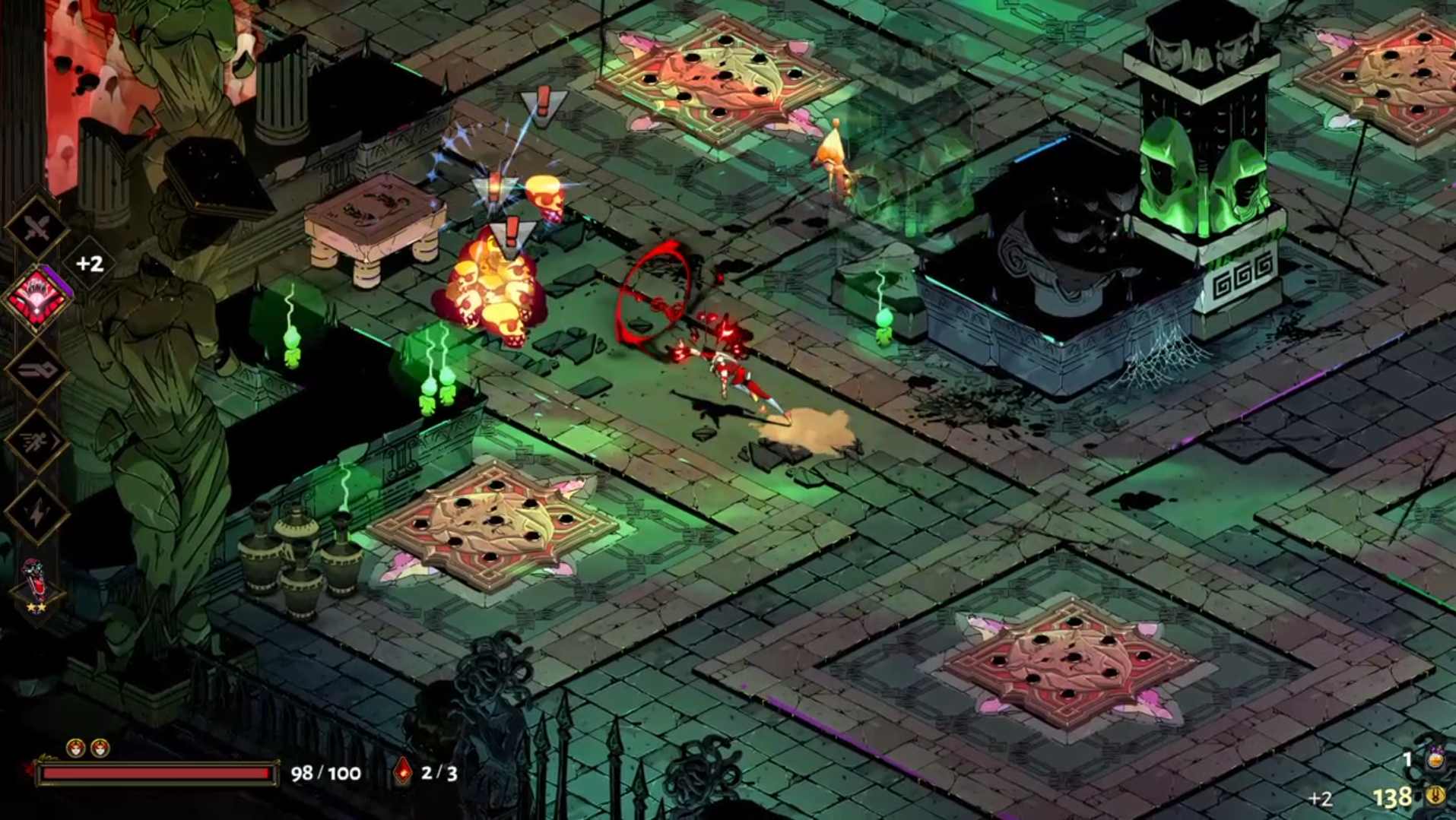 Another point that helps a lot in this are some items that you take back home after each run. They are: Darkness, Kthonic Keys, Gemstones and Ambrosia. The first two are essential to improve your stats, as the keys unlock new weapons and unlock upgrades that will make your journey easier. One of the most essential is the Death Challenge, which revives you with half your total health after being killed in combat.

So, even if you start to feel some kind of frustration, just run runs to farm these items and the situation will be easier for the next “real” attempts. And a curious thing about this is that whenever I talk to friends I realize that the best weapon in the game is the one that suits you best, as the answers are always different.

The great game mechanics are the blessings, random upgrades given to each run by Olympian gods such as Zeus, Ares, Artemis and Dionysus. Each has a specific focus, such as increased damage, defense, critical hit and poison. 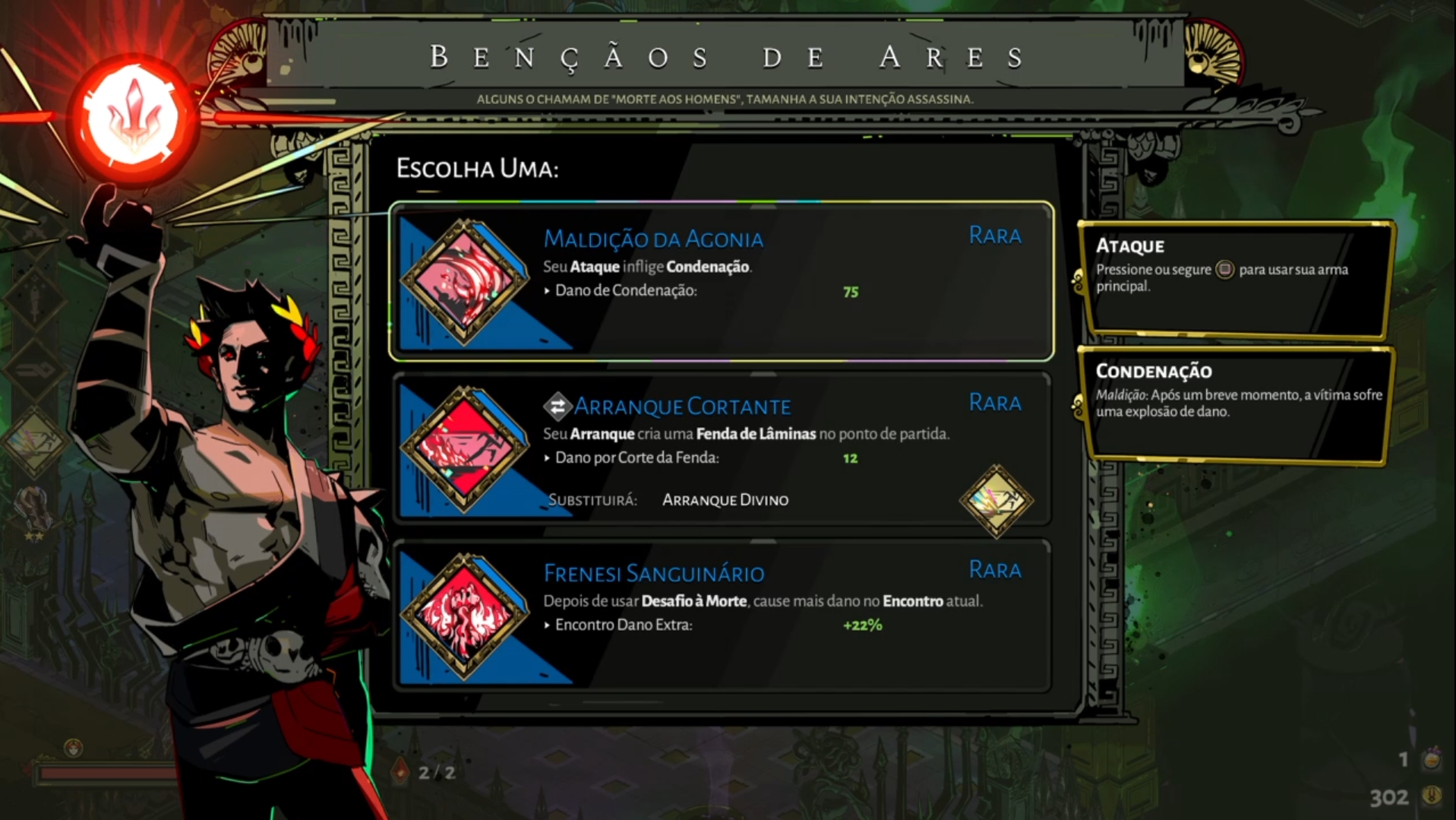 Some of the blessings offered by Ares.Source:  Voxel

It’s amazing how each of these powers can be combined with several others to create extremely different builds from each other. It all depends on a little luck, as you don’t know which god will appear or even what blessing he will offer, but there is a way to force that favorite build using the memories, items given by the characters later that you offer them an ambrosia. These little gifts ensure that you’ll find that particular god as soon as possible, making your work easier and leaving little room for bad luck.

Today, my power mix is ​​pretty specific, using Ares’ attack upgrades and Athena’s dash, but the more I watch game-related content, the more I’m impressed with builds created by players around the world. One of the most incredible ones I saw was done by YouTuber Haelian, who managed to defeat the last boss without getting his hands on control, as he had selected several Vengeance-type abilities, which activate after the player takes damage. 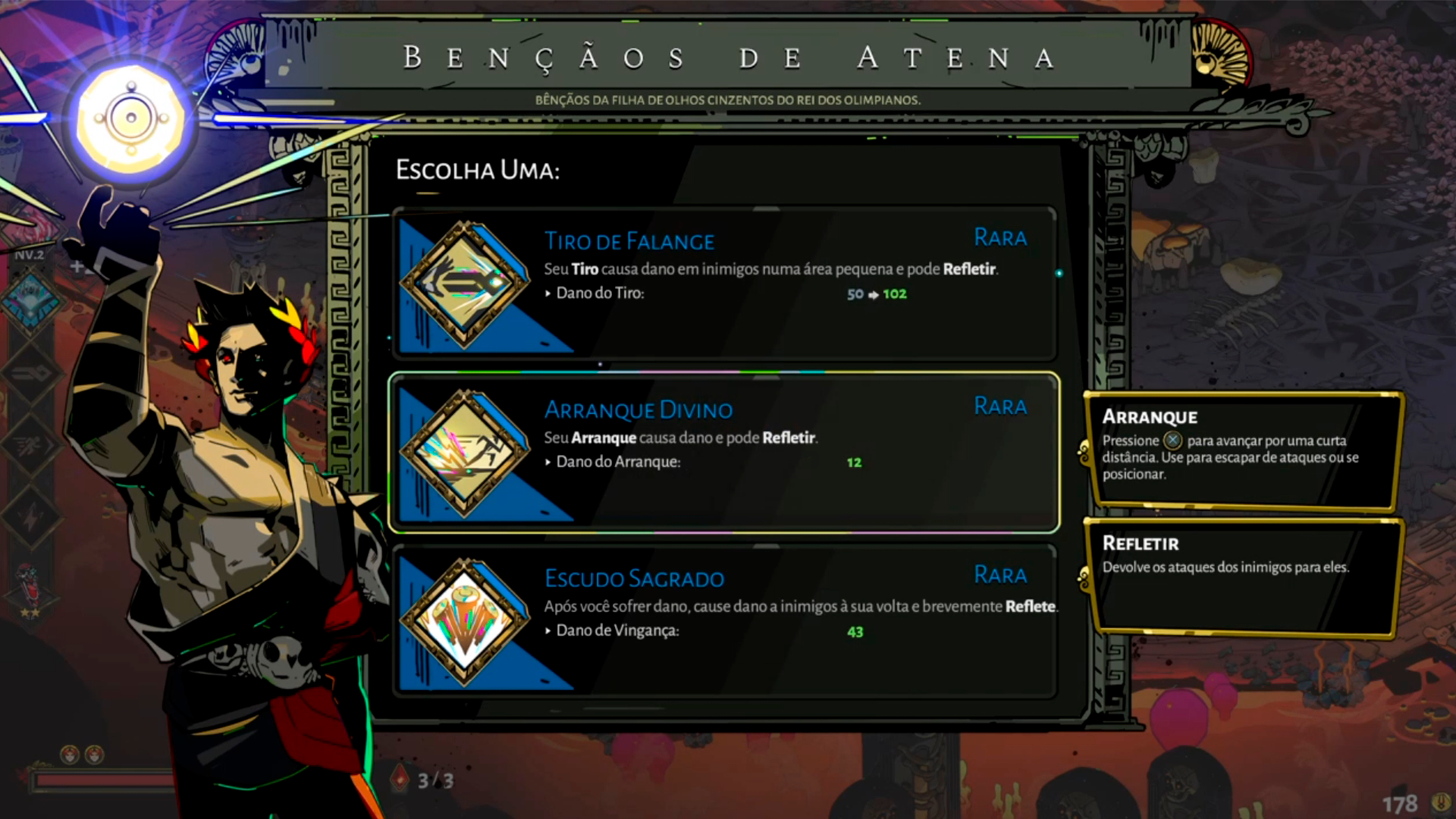 Some of the blessings offered by Athens.Source:  Voxel

You can also comment on the combined blessings, which improve specific attributes when the player has the specific abilities of two gods. They help a lot when the player has a specific focus, but they are harder to come by, even with all the requirements. Oh, and a quick tip: if you change weapons, change builds. You will thank me for it one day.

I was really amazed by the variety and complexity of this system, which is the basis of the game. It is the famous case “easy to understand, but difficult to master”, since it will always be possible to learn and discover new combinations, even with hundreds of hours played. 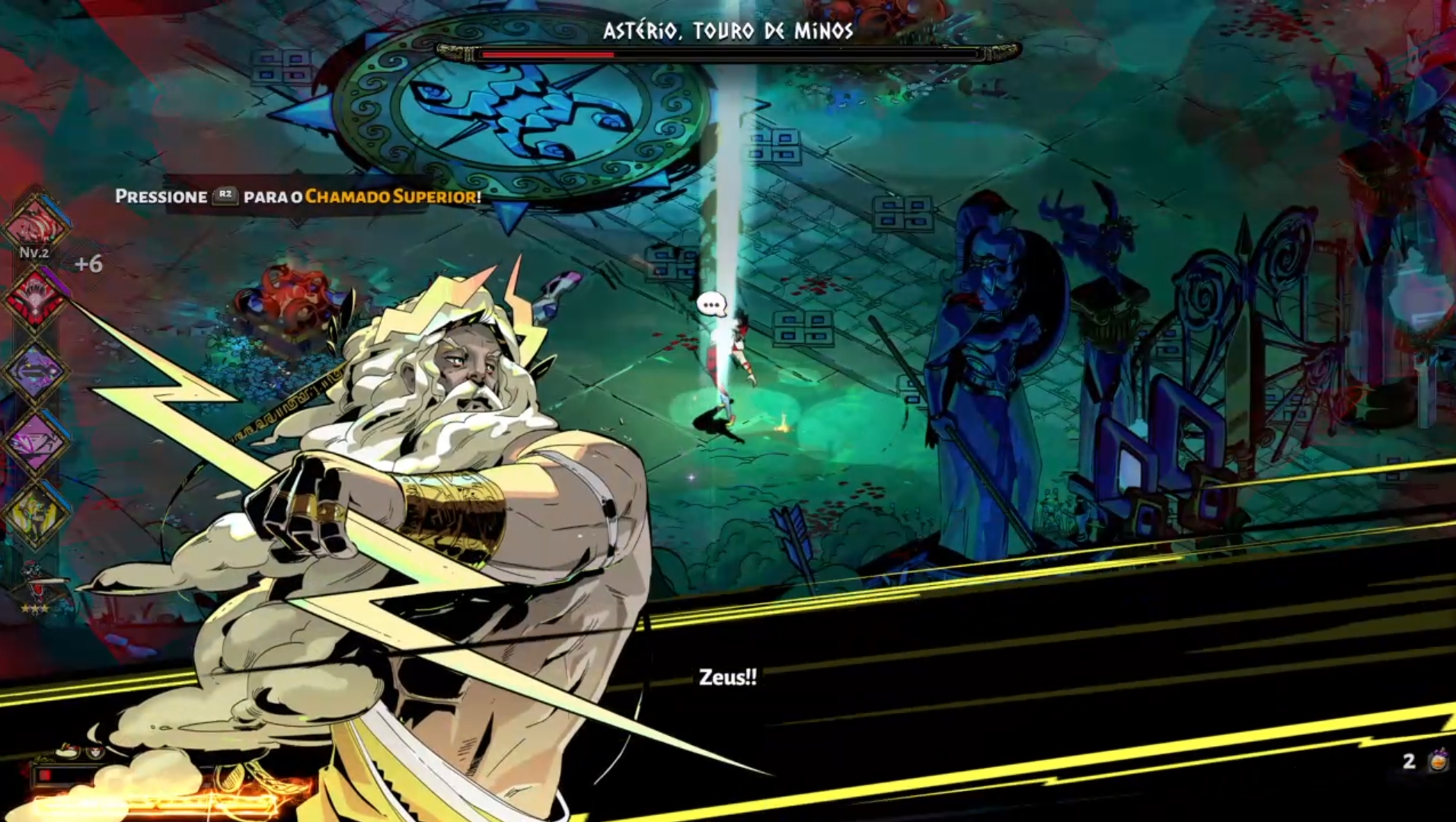 Zeus answering the Higher Call of Zagreus to defeat the Bull of Minos.Source:  Voxel

And how is it on the consoles?

The version played was a PS4 and my little Slim did the trick, but not without taking a few hits. Gameplay is extremely fluid, apparently above 60 frames per second most of the time.

Yes, I said “a lot of the time” because, on screens with a lot of things happening, there are some dips in the fps, similar to the ones present in the Nintendo Switch version. An easy moment to visualize is in the battle against the Skeletal Hydra, as there are too many attacks and enemies at the same time. 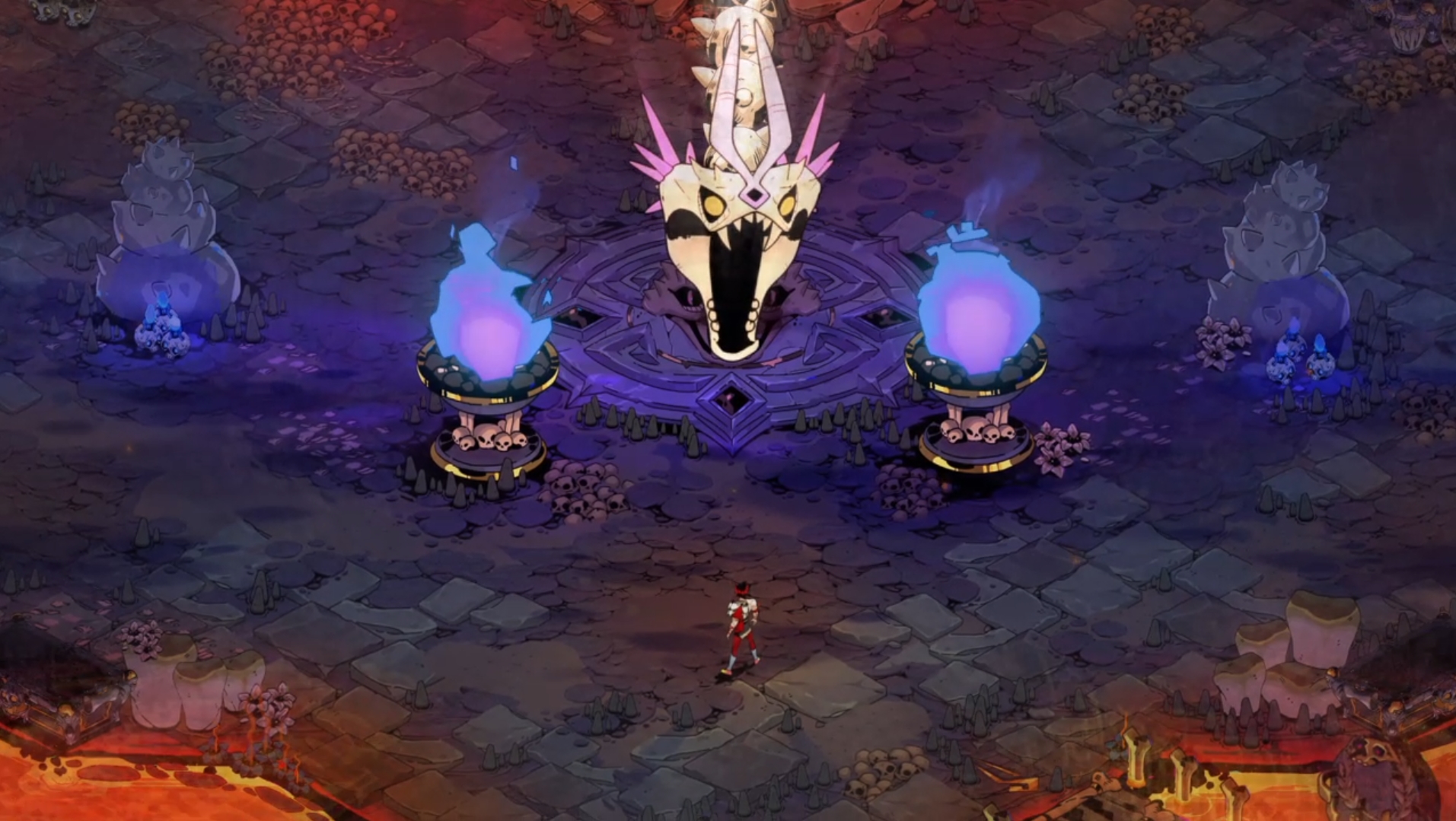 Clash with the Skeletal Hydra made the PS4 Slim cry (a little).Source:  Voxel

Another thing that bothers a little is the loading time between some phases, especially between larger sections or even going to the outside area of ​​Hades’ house.

I believe the same doesn’t happen on the PS5 and Xbox Series X/S because of their much more powerful hardware, but whoever plays it on older-gen consoles won’t have big concerns about performance. 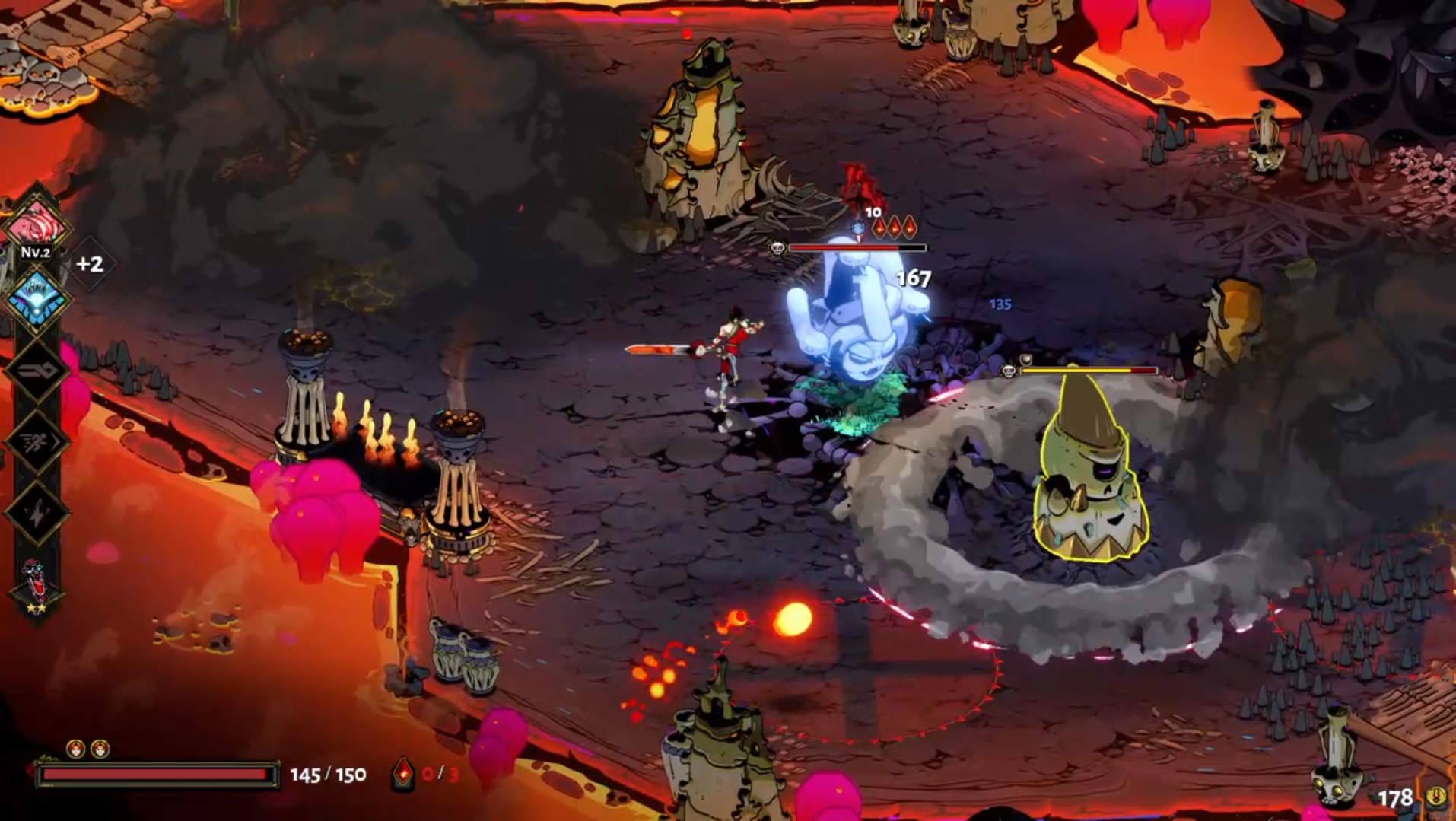 Clash against mini boss in Asfódelo was another one that showed fps drops.Source:  Voxel

Hades it is one of the best surprises that 2020 has provided. A fun, electrifying and not frustrating experience that has marked many players around the world, including the one that speaks to you. It’s a game recommended for those looking for a well-written story and captivating gameplay, which always pushes you forward even after a defeat.

Hades is a video game masterpiece that will be remembered for years to come as one of the greatest independent games ever released.

Hades was kindly provided by Supergiant Games to carry out this review.