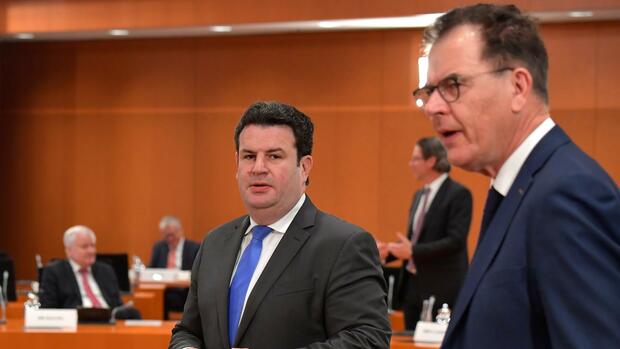 Berlin Minister of Labor Hubertus Heil (SPD) and Minister of Development Gerd Müller (CSU) had already made an appointment. On March 10, they wanted to present their common cornerstones for a supply chain law that would oblige companies to ensure that their suppliers also respect human rights.

But nothing came of the appointment. The corona crisis was already casting its shadow, and it would not have been a good idea to announce new burdens on the economy while companies were already registering short-time work.

In addition, the key points should not be submitted until the consulting firm EY has completed the second wave of its company survey. It is intended to provide insights into the current state of respect for human rights along the supply chain.

The results of the first wave presented in December 2019 were not very glorious for the German economy: less than 20 percent of the 400 participating companies have taken measures to ensure that suppliers from developing countries comply with environmental and social standards. 2600 other companies with more than 500 employees had not filled in the questionnaire at all.

Heil and Müller had therefore formulated the cornerstones for their “Due Diligence Act”, which were previously under wraps but are now available to the Handelsblatt. According to this, companies with more than 500 employees will have to check “whether their activities have a negative impact on human rights and take appropriate preventive and remedial measures”.

According to the two ministries, around 7280 companies based in Germany are affected. Both partnerships and corporations under German and foreign law would be covered by the law.

The government plans to oblige companies to review their activities and business relationships to determine whether they are potentially or actually detrimental to internationally recognized human rights. Risk areas include, for example, forced and child labor, discrimination, violations of freedom of association, occupational safety and health or land rights and damage to health and the environment.

Strong appeal from the employer president

If the law comes, companies will have to develop procedures to identify such risks. They should take appropriate measures and set up a complaints procedure to keep their business relationships clean. Once a year, they have to report publicly on how to prevent human rights violations.

After a first draft from the development department became known, employer president Ingo Kramer sent an urgent appeal to the government at the end of last year: As an entrepreneur, he was “already with both legs in prison” if he adhered to human rights to the last link guarantee its supply chain and should be liable for it.

In their key points, Heil and Müller now make it clear that the required risk management should be “proportionate and reasonable”. The remedial measures depended on whether the risks occur at one’s own location, with a direct supplier or at the end of the supply chain. “The closer the relationship to the supplier and the higher the possibility of interaction, the greater the responsibility for implementing corporate due diligence.”

An entrepreneur should only be liable in the event of an impairment “that was predictable and avoidable when due diligence was fulfilled”. It happened along the supply chains
However, he is not liable for a violation of human rights, although the entrepreneur has done everything appropriate within the scope of the factual and legal possibilities. If companies join and implement a state-recognized industry or protection standard, they can only be prosecuted in the event of intent and gross negligence.

According to the key points, the responsible federal authority can impose fines if the measures taken to protect human rights are insufficient and the company does not improve them.

In the event of suspected serious violations that are brought to light by whistleblowers, individual case examinations are planned. Companies that have been fined should be excluded from public contracts for a certain period of time.

The “Due Diligence Act” is controversial within the government coalition. The SPD is in favor and knows the unions on their side. There is opposition to this in the Union, which tends to rely on voluntary commitments by the business community. Recently, however, Union parliamentary group leader Hermann Gröhe (CDU) also campaigned for legal regulation.

The company survey is currently being evaluated, Gröhe told the editorial network Germany. “But I think we need a supply chain law to strengthen due diligence to protect human rights.” The ruling parties would still have every chance of getting the law through during this parliamentary term. “So we shouldn’t postpone this to the next coalition negotiations,” said Gröhe.

The results of the second wave of the survey will be presented to the Interministerial Committee on Economic and Human Rights on July 14th. It is quite possible that the corner points will then be pulled out of the drawer again.

More: The economy is demanding that the federal government do more to promote free trade