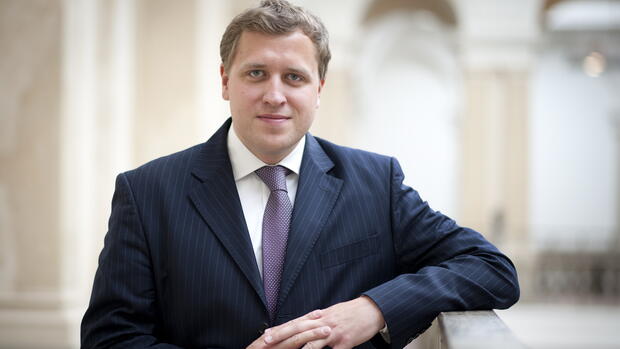 Berlin When Health Minister Jens Spahn (CDU) presented the Corona Warn app with several cabinet colleagues, he stayed in the background: Gottfried Ludewig. The 37-year-old worked for weeks to ensure that smartphones can be used to track the contacts of people infected with Corona in Germany.

Even if he is rarely in the foreground, Ludewig is no stranger to Berlin. He heads the “Digitization and Innovation” department at the Federal Ministry of Health – an area that has become even more important in the pandemic.

The Corona warning app is already a success, says Ludewig. On the weekend, he wrote on Twitter: “Record-breaking participation within just four days. 10.6 million users. ”Even if some countries were faster in terms of development, the Federal Ministry of Health is convinced that the German app has set an international standard in terms of user-friendliness, functionality and data protection.

For a long time, digital solutions in the health sector were dismissed as gimmicks. In the meantime, they are increasingly seen as instruments for better and more efficient care. And Ludewig is convinced that the crisis will anchor digital offers in health care even more firmly in the everyday life of Germans.

“The policyholders find out very specifically that digital applications help in healthcare,” says Ludewig. Digitization does not consist only of individual parts such as the Corona warning app. “It’s about a multitude of measures, a holistic approach, in which we are open to innovations in healthcare as a whole.”

And the Ministry employee is driving this forward. When Spahn took over the ministerial office in spring 2018, he made digitization of the German healthcare sector a priority. A field in which the Federal Republic was quite behind.

Politicians had already issued the goal in 2004 of networking patient data. Not least because of the mutual blockade of health insurance companies, doctors and other actors in self-administration in the health system, little happened.

Spahn brought Ludewig into his house as head of the newly founded digitization department. Before that, the native of Bonn sat for the CDU in the Berlin House of Representatives, where he already dealt with digital health as the health policy spokesman for his parliamentary group. He worked with big goals: Berlin had to become “Europe’s health metropolis”, he said at the time.

Crisis as an opportunity for the digitalization of healthcare

Ludewig builds on this in his new role. Last year, the Ministry of Health founded the “Health Innovation Hub” in the capital, a competence center that is intended to accompany ideas from start-ups on their way to regular care.

“The example of telemedicine shows that the crisis is an opportunity for the digitalization of healthcare,” says Ludewig. The doctors’ day had spoken out two years ago for an end to the so-called distance treatment ban.

Then the Ministry of Health campaigned for video consultation hours to be paid for by health insurance companies. Nevertheless, at the beginning of the year, only around 1,700 medical practices offered their patients to report on the Internet for minor complaints.

The offer has increased noticeably due to the crisis: there are now more than 25,000 surgeries with video consultation hours. “Many people experienced telemedicine during Corona in everyday life and noticed: I don’t have to sit in the waiting room with a cold,” says Ludewig. He also perceives greater acceptance of telemedicine among doctors: “You see that these offers are accepted by the patients.”

As another example, Ludewig mentions the new online register of hospitals to which free intensive care beds are reported. The directory, which was used to control patient flows and avoid overcrowding of individual hospitals in the pandemic, was set up “in just three to four weeks”.

This shows how powerful the healthcare system can be in digitization if everyone pulls together and pragmatically searches for solutions. “If we maintain this pragmatism and speed for the period after the crisis, we can achieve a lot,” says Ludewig.

His hope: The networking of data gives doctors a more precise overview of their patients, does not have to request every report by fax, and can be assisted by artificial intelligence. This will make diagnoses more accurate, avoiding duplicate examinations or prescribing incompatible drugs. And apps on the smartphone should better accompany chronically ill people like diabetics through everyday life.

In view of the rising health expenditure in an aging society, digitization can also reduce costs. A study by the management consultancy McKinsey came to the conclusion that the consistent use of digital technologies could have saved up to 34 billion euros in the healthcare industry in 2018 – this corresponds to around a tenth of the total expenditure in the system.

Savings result from the better control of patient flows through the paperless exchange of data, but also through more targeted therapies and more prevention. The assumption: Patients whose health problems are identified at an early stage are less likely to become an expensive treatment in a hospital.

However, the path to the digital health system remains rocky: it is questionable whether the heart of Spahn’s digitization agenda – the information on the patient’s medical history, which is bundled in an electronic file – will be ready for use on January 1, 2021 as planned.

Ludewig is calm: “Compared to the 15 years of standstill before, we have been on the move quickly with the electronic patient record in the past two years,” he says. It is better to start with a patient file that cannot do everything and then develop it further. “Otherwise, another 15 years will pass without us moving a millimeter in the real world.”

The new health world also triggers concerns about what happens to the very personal health status data. Ludewig says the ministry attaches “greatest importance” to the protection and security of health data. “In some debates, however, the data protection argument only appears to be used to defend itself against change.”

After the experiences of the past few months, Spahns Digitisierungmann hopes: “The practical experiences in everyday life with digital health offers during the corona crisis could change people’s perception – away from theoretical debates towards concrete benefits.”

More: Help for the helpers – this ex-business consultant sets up a corona aid fund.