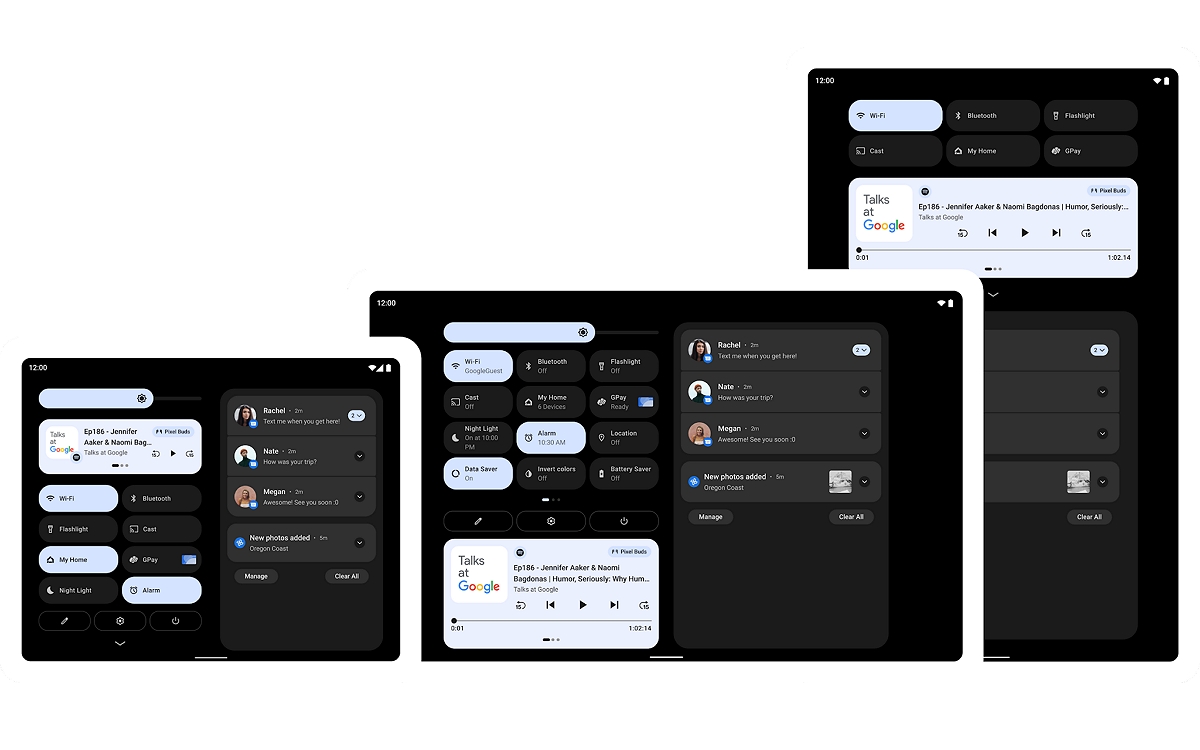 Android 12L is not terribly different from the classic Android 12, which has only been available since last week on Google Pixel smartphones. Indeed, it is in fact onlya set of new features for the existing operating system which are optimized for large screens.

The new version of Android brings new tools and tips that will help developers optimize their apps for devices that have large screens such as foldable smartphones, tablets and Chromebooks (under Chrome OS). It therefore brings many improvements to the user interface to make Android more usable on large screens. Android 12L is therefore a true one-off version of the operating system, with a new level of API all its own. This is the first same-generation update to function like this since Android 8.1 Oreo in 2017.

Android 12L looks a lot like Android 12 on a smartphone, but it has been optimized for larger screens. The notifications screen, the lock screen and other parts of the system like the control menu use a two column layout so that no part of the screen remains unused. Google notes that any screen over 600 dips (device-independent pixel) will display a two-column layout that uses the entire screen.

Another problem that owners of Android tablets and foldable devices often face is that apps aren’t always optimized for large screens. Although Android 12L cannot completely solve this problem, it adds an improved compatibility mode to manage these applications.

On the aesthetic level, Google therefore adds tools that allow developers toimprove the appearance of their applications in different windows or screens. They will be able to use custom colors or treatments, apply custom rounded corners and adjust the position of windows.

Google has been working on making multitasking more powerful and intuitive in Android 12L. Indeed, Android 12L includes a new taskbar at the bottom of the interface, similar to the one available in Chrome OS, but missing in Android 12. You can pin frequently used apps and access them when you switch between windows.

You can even drag and pin an app to either side of the screen, as you might do on Windows, which will make it much easier to manage multiple applications at the same time. In addition, Android 12L automatically allows all applications to switch to “split screen” mode, even if they are not resizable, in order to guarantee a consistent experience to users.

In the example of Google, the Quick settings menu is pushed to the left of the screen, while the notifications panel is locked on the right. This gives you the opportunity toaccess both simultaneously without opening one app and closing another. This feature is supposed to work seamlessly on foldable devices, intelligently arranging apps when you fold or unfold smartphones.

When will Android 12L arrive?

Android 12L is currently available for developers who can start building and testing their apps. using Android 12L emulator via Android Studio. Google also says it’s working with OEM partners to roll out the 12L update, and a developer preview of Android 12L for the Lenovo P12 Pro tablet is in the works.

According to Google, Android 12L will arrive for all in early 2022, in time for the new wave of big-screen Android devices. Indeed, we know that many manufacturers like OPPO are working on their first foldable smartphone for the end of the year. We should also discover devices signed Honor, Xiaomi or Vivo.

It could also be a clue that Google is planning to announce its long-awaited Pixel Fold around the same time. We imagine that this new update of the Android operating system will delight users of smartphones like the Galaxy Z Fold 3, or the future Galaxy Tab S8 Ultra with its giant 14.6-inch screen.