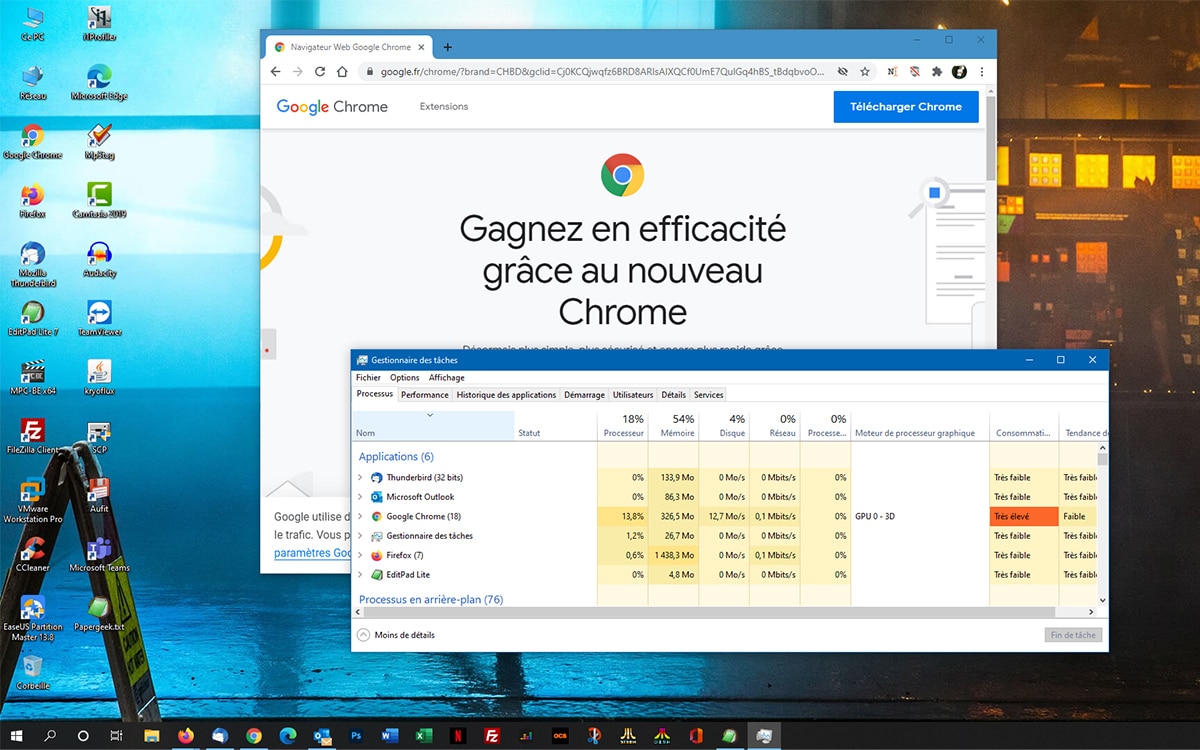 Thanks to Microsoft, Google found a way to improve Chrome. But now Microsoft must agree to add two small pieces of code in Windows 10 … And that, we do not know if Microsoft is ready to do so.

Yes Chromium remains the undisputed leader of browsers, with nearly 70% market share worldwide (source: Net Marketshare), Google’s software nevertheless has some setbacks, especially with the most modest configurations under Windows 10. The browser has grown heavier over the years and consequently consumes more RAM. What seriously slow down the most modest machines.

Twist last June: Google received unexpected help, allowing it to significantly improve its browser, that of Microsoft. But not everything went according to plan, and Google is now asking the company to integrate a tiny bit of code that would allow Chrome to really improve its RAM handling.

Read also – Windows 10: if Google Chrome is improving, it is also thanks to Microsoft Edge

Google and Microsoft go hand in hand to improve Chrome

Thanks to its “Segment Heap” technology, Microsoft recently succeeded in considerably reducing the RAM consumption of its Edge browser on Windows. In theory, this technique should also benefit other applications, including the Chrome browser. If the first tests carried out by Google were conclusive, the Mountain View giant is currently facing another problem and asks Microsoft to give it a little help.

As a reminder, since the start of the year, Microsoft Edge has been based on Chromium, the browser developed in Open Source and from which other competitors such as Chrome and Brave also benefit. But with Edge, Microsoft does more than adapt Chromium to the operating systems it is intended for. The Redmond-based company is also trying to improve the browser, so that even its competitors can benefit. Thus, last June, we learned that Edge was consuming up to 27% less RAM, and that Chrome should also benefit from this advance.

But as of now, Microsoft’s solution to Chrome has yet to be implemented. Google’s browser is still hungry for RAM, even in its very recent version 85. Because not everything goes as planned: while Segment Heat does reduce the use of RAM made by the browser, the technology also reduces the performance of the machine and causes high CPU usage. According to Google, the main cause of this problem would come from the management of the rendering engine.

For Google, Microsoft would only need to add a very small feature to one of the libraries in Windows 10, in this case ntdll.dll, to resolve the problem. Two simple indicators (HEAP_ENABLE_SEGMENT_HEAP and HEAP_DISABLE_SEGMENT_HEAP), and voila. Especially since they wouldn’t only benefit Chrome. A Chrome developer explains that “these metrics would be very useful for all Chromium-based browsers. “

Google has therefore found a solution to reduce the CPU consumption of Chrome when Segment Heap technology is used and asks Microsoft to integrate its solution into Windows 10. The ball is now in Redmond’s court. In the meantime, Microsoft’s browser Edge continues to gain popularity and has just surpassed 8.50% of users worldwide. As a reminder, Edge accounted for 7.59% last March and passed Firefox.