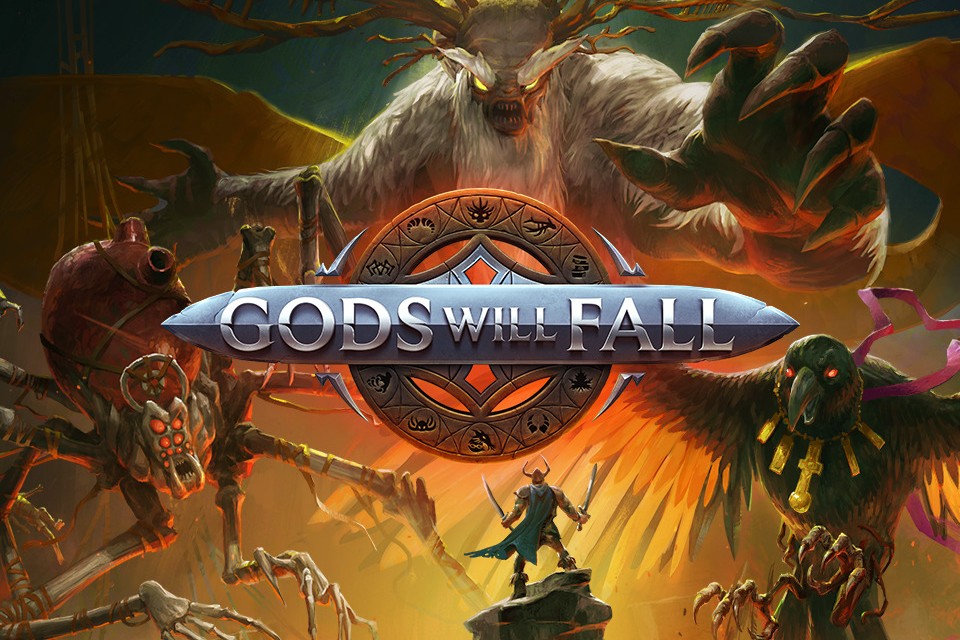 Small independent developer Clever Beans, which had already shown its value by helping in the production of Wipeout Omega Collection, is ready to take bigger flights in its first big project, the game Gods Will Fall! This is your most courageous bet so far, and the Brazilian consultancy of producer Deep Silver kindly invited us to take a look at the game in a presentation via Discord.

Launching on January 29, 2021, the roguelike Gods Will Fall will have versions on PC (via Steam and Epic Games Store), Nintendo Switch, PlayStation 4 and Xbox One, and the idea is to make it playable also on the new PS5 and Xbox Series X | s. Still, don’t expect a cutting-edge look, as it is clearly a modest budget game made by a small team.

Thanks to its strong inspiration in Celtic mythology and culture, the game manages to build a strong visual identity despite its more humble graphics. Although its presentation refers to an indie game from the beginning of the last generation, the design of the monsters, creatures and environment makes up for it well, since they vibrate with many colors and elements that stand out a lot.

Gods Will Fall is a roguelike with multiple protagonistsSource: Deep Silver

However, this implies other limitations: as the world was all drawn by hand, this is a roguelike that does not change your map drastically at each game. On the contrary, you will always find the 10 main dungeons in the same places, and the main variable is only up to you, since you must choose in which order to overcome the challenges yourself!

In Gods Will Fall, the player takes control of a group of eight shipwreck survivors and, as little trouble is silly, as soon as they arrive on dry land they discover that they need to face the 10 gods that give the game its name. The developers’ idea is not to tell a single story, but rather that different players share their own stories with each other through their decision making, successes and failures.

This seems like a somewhat daring goal for a game so simple, that at most it presents a shallow system of interactions between heroes. The eight survivors form and develop bonds with each other as you go through the stages, and some of them may get closer, or even hold a grudge against others depending on how the conversations are going. The most attractive part of the gameplay is that the more enemies you kill throughout the levels, the weaker the final boss gets, so you are always calculating the cost-benefit of entering many fights.

To win, you need to be patient and learn to make the best decisions in managing your warriors. Each of the gods has its own level, minions and powers, with varying difficulty. To overcome them, there are several different weapon kits to master: the protagonists can play with swords and spears, as well as axes or maces with one or two hands.

Warriors can pick up new items and weapons and then distribute them among the other clan mates, since they are all able to learn new skills. If a survivor falls in combat in a dungeon, you can try to rescue him promptly or leave to do so when he feels stronger and better equipped.

The developers’ expectation is that it will take several attempts to finally get the game to zero, and the replay factor revolves around just finding the best order of dungeons and equipment to keep your survivors safe until the end. It seems very little for a genre that recently saw the release of the acclaimed Hades, which had a rich narrative system and increasingly rewarding gameplay with each attempt.

In Gods Will Fall your clan always varies, with women, men and different body structures and weapons expertise for you to master. In the hands-off demonstration we watched, we were able to see four sections of the game: Tutorial Cave, Bone & Sinew Real (home of Deus Osseus), War Realm (Deus Morrigan) and Wicker Realm (Deus Belenos). The boss fights seemed fun and thought-provoking, but the path there was more to the generic.

For those who are a big fan of roguelike, it might be worth giving the game a chance when it launches in the beginning of 2021, but the recommendation is complicated for others, since the title seems mediocre in most of its elements, since the fights to the layout of the levels. It is twisted so that Gods Will Fall do better on hands than on hands off. What did you think of the game? Comment below!