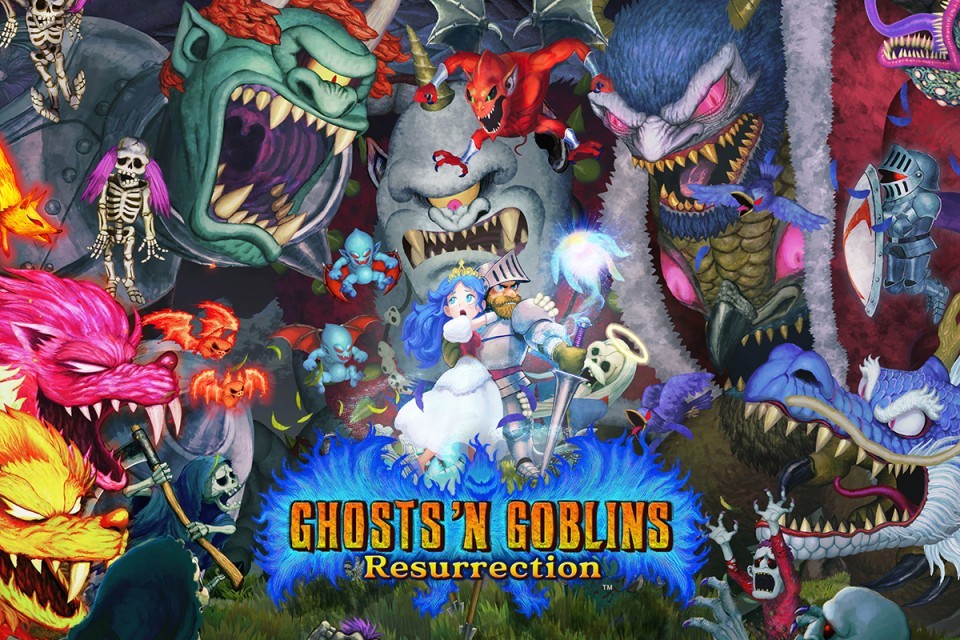 When the first game in the franchise Ghosts’ n Goblins was launched for arcades in 1985, the reality of video games was very different from what we see in the current market. After all, the main games of the time had relatively short campaigns and an absurdly high level of difficulty in order to motivate players to spend many hours with the same title.

Over the generations, the relationship between total duration and difficulty has practically been reversed and, currently, most launches have very easy campaigns and very extensive plots, so that the player can stay in the same world for dozens of hours without needing worrying about not being able to pass the level or having to repeat the same area several times in a row.

It is for these and other reasons that so many people fall into the temptation to compare any games that offer some minimum level of challenge to Dark Souls, one of the few modern triple A series that are still willing to offer a cycle of gameplay based on trial, error, learning and repetition. But how Ghosts’ N Goblins does it come out on the modern market, more than 30 years after its emergence? Find out in our full review below!

If you have played any of the countless editions of the series released over the generations, you will like to know that its essence has been perfectly preserved in Ghosts’ n Goblins Resurrection, exclusive to Nintendo Switch. In large part, this is due to Tokuro “Professor F” Fujiwara’s return to the direction of the game, repeating the role he had already played in 1985.

But if this is your first time in the franchise, it is a good idea to start playing fully aware that this is one of the most challenging series in history, that type of game that most poor mortals never reach the end of. without having to resort to tricks or save states in order not to restart the phases of the beginning with each life lost.

Even with several ways to make the new game a little more accessible to the modern audience, there is no doubt that this is one of the most hardcore challenges you can experience in the current generation, and you will probably have to die a few hundred times before it arrives to the final credits!

Now there are four levels of difficulty to select right away, and they make a stark difference in how the challenges will unfold. Although the patterns of attack and appearance of enemies change with each level, what you feel most in your skin is the amount of hits that the protagonist Sir Arthur endures before losing a life.

Most purists may like to start directly at the highest level, where Arthur starts dressed in his iconic armor and only endures a single contact with enemy projectiles or minions before he is left unprotected, wearing only his underpants. In all difficulties, this half-naked state means that your life is on the line.

As you reduce the difficulty level, Arthur supports more and more hits, progressively according to the chosen facility. Your armor stops being dismantled at once, and it is possible that you lose only the breastplate, or just the helmet, giving the player a greater tolerance for mistakes.

If you die too much in the same area, the game will recommend that you reduce the level of challenge before proceeding towards your next attempt, which can often be a good idea, since much of the difficulty is overcome since you can decorate where and how the enemies appear that the game insists on putting in your way.

Resurrection it also presents a new crutch to overcome the most complicated parts: the rebirth banners, flags that you find throughout each stage and you can use as a return point if you die and do not want to reject the entire area from beginning to end. Without them, the checkpoints are quite far apart, so it is normal to abuse them throughout your first campaign.

The greatest hits of the series

In a generation taken over by reboots, remakes, ports and remastering, it’s hard to find the most correct nomenclature for Ghosts’ n Goblins Resurrection. Perhaps the fairest thing is to consider it a sequel to the series, since practically all of its levels are … “new”.

The quotes are necessary because, in practice, you will spend most of the campaign time revisiting very familiar scenarios, in a kind of remix with all the main bosses, minions, traps, songs and environments that you have seen in Ghosts’ n Goblins and Ghouls’ n Ghosts.

But nothing happens exactly the way you were expecting, since even the most familiar elements of the stages have been arranged in a way that offers unprecedented situations. From cemeteries to frozen mills and palaces, the new game often arouses a delicious “hey, I remember that part of the original” nostalgia, but then completely subverts your expectation with some catch.

It is strange to complain about this, but interestingly the best parts of the game are precisely those that mix nostalgia with new things. In areas where Resurrection is really trying to do something 100% new, it seems that the level design is not as captivating and fun as at the most nostalgic levels.

The best moments happen while Arthur moves freely around the scene, calculating the routes to try to escape the sea of ​​enemies and projectiles flying across the screen. But from half of the campaign onwards, it is common to find areas with artificially paced progress, where you are forced to follow the slow horizontal scroll until the game allows you to run again.

Even these segments still have some good ideas, such as areas where you end up switching off the local lighting if you shoot the candles and torches in the scene. This makes it difficult to see the platforms around you and ensures some freshness throughout the campaign. Still, there is a feeling that the first and most nostalgic phases are the coolest.

Whoever played the old games knows that to complete 100% the difficult adventure, it is not enough to just march to the final boss and defeat him. Without delivering major spoilers, Resurrection it also makes a nice cutie after you reach your “ending” for the first time, revealing even more things for you to do later.

Even before that, it is evident on the stage selection screen that each level has collectibles for you to collect, a great motivator not only for complectionists, but also for those who would like to become even stronger. After all, you need to collect the little fairies that are flying here and there, and then exchange them for spells in the main menu.

You start the campaign with no extra powers other than the different weapons you collect along the way, but these fairies can be exchanged for a number of very cool active and passive powers, from a spell that sends lightning or turns Arthur into a rolling stone, to an attribute of luck which can guarantee you a point of energy more or greater damage in your shots.

If we take into account the exciting soundtrack full of great reinterpretations of classic tracks, and the very beautiful graphics that abuse an art direction that looks more like hand-painted in each of the details, exploring every corner of the levels in search of collectibles ends up stretching well what would otherwise be a very short campaign, which can be zeroed in four or five hours if you are skilled enough.

Ghosts’ n Goblins Resurrection it is a love letter to the first games of the franchise and, why not, to the times that never come back. From the first lackey to the final boss, to face this adventure is to be taken back to the 1980s, when video games offered real challenges that few were able to overcome. Wisely, the new game offers enough tools for a variety of player profiles to make it to the end this time around, but it still doesn’t make it something that newcomers to the platform genre should try out. If you are a hardcore player, the biggest problem is the short campaign that will leave you wanting more …

Ghosts’ n Goblins Resurrection was kindly provided by Capcom to carry out this analysis.