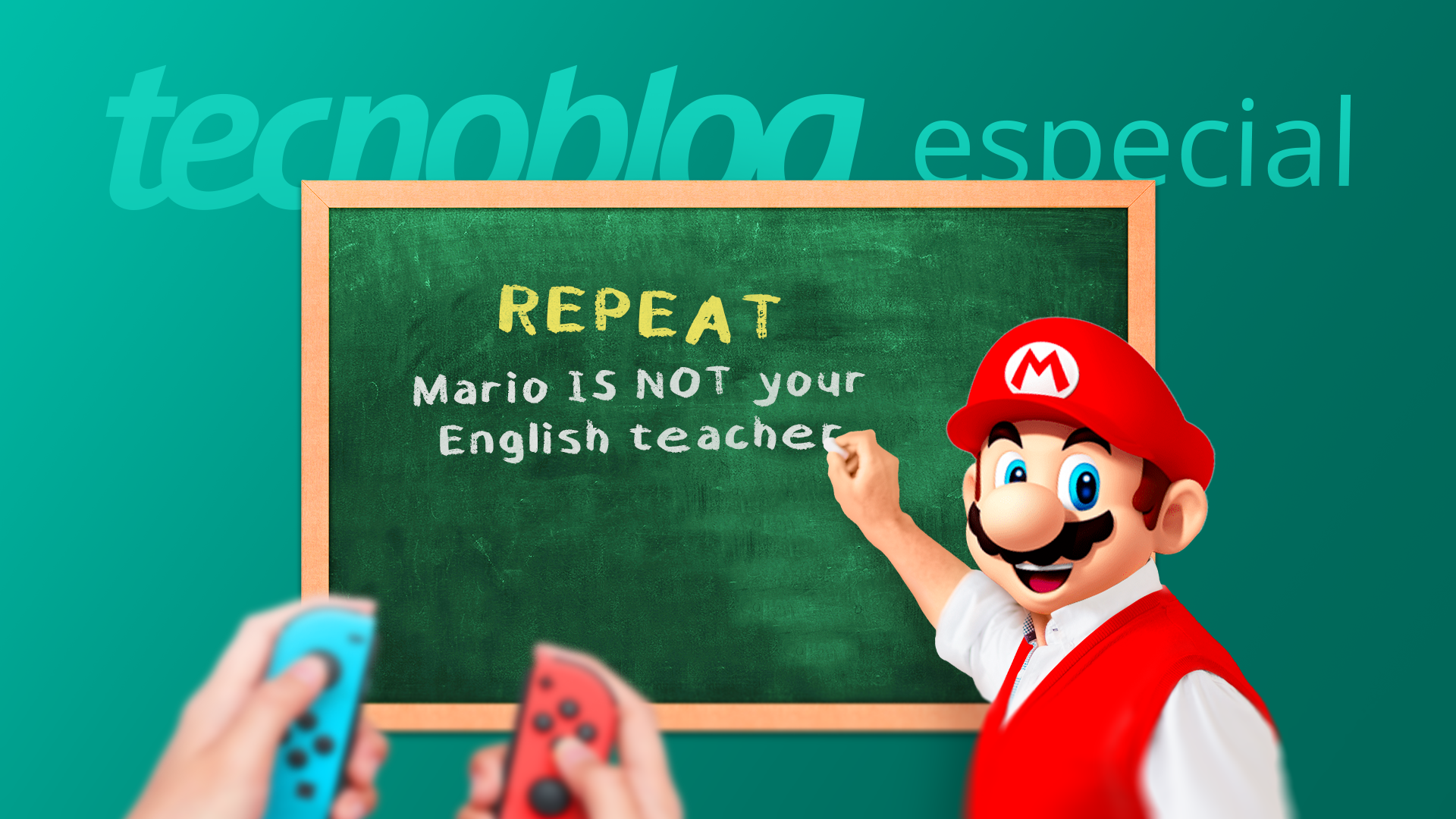 You’ve learned English with games? Do you think that all games should be translated into Brazilian Portuguese? Or do you consider it unnecessary bullshit and that everyone should master a foreign language? Is it the same for other languages ​​such as Japanese? Questions of this kind were raised in yet another debate in the Twitter which showed the reality of many players and how access to several famous titles is still restricted thanks to a lack of localization, that is, the translation into our language.

Like almost everything on Twitter, the debate was fueled by two fiery sides. Worst of all: this is a cyclical discussion, which is always raised annually, or every six months, also when a major launch hits the market only in English or Spanish, leaving aside the need for translation into Portuguese when being released in Brazil.

The truth is that we live in bubbles. Within the Twitter bubble, among the people you are likely to be most intimate with, a lot of people must speak English. But that represents a tiny part of society. A research funded by the British Council, an institutional organization of the UK government, has revealed in the past that only 5% of Brazilian teenagers speak English. Among young people aged between 18 and 24, this percentage increases, but not much, and goes to 10%. The rate of people who are fully fluent is only 1%, while people who say they have basic English are the majority – 47%.

It is worth mentioning that the survey was carried out in 2013. Even so, almost a decade seems not to have been enough to improve these numbers. English Proficiency Index Education First, an international education company, lists Brazil at position 60, out of 112, in 2021. This indicator has improved since 2013, but still at a very slow pace.

These numbers alone would be enough to dismantle any argument against game localization. Even small producers and independent studios have been struggling to release translated titles here, what justifies that a billionaire and international company, like Nintendo, still doesn’t release its games in our language? After all, they are officially available here, but with very rare and unpublished translations.

But let’s try to expand the arguments…

The answer is pretty obvious, but at the same time it might not be. Knowing English is important, but you, as a Brazilian citizen, don’t have to. The official language of Brazil is português, with some other languages ​​thanks to the original indigenous peoples and also the Brazilian language from Signals, created so that people with hearing impairment can communicate.

On the other hand, if you want to work for a foreign company, it might be a good idea to learn English. If you want to travel to a country, it can be an alternative in communicating with foreigners. But to play video games? It shouldn’t be, right?

To get an idea of ​​who works with this, I talked to Patrícia Pond, who has been an English teacher for a few years and who has taught courses and also privately. She told me something curious: the fact that many people seek courses or classes to learn English for leisure, not necessarily for work.

“Incredibly, what I realize is that those who want to learn for fun end up learning more than those who want to learn for professional reasons, people learn more to understand a song lyrics and a series or movie than to hold meetings on Zoom, because the leisure is more stimulating, while the other is treated as an obligation,” Pond told technoblog.

A pretty surprising and out-of-the-box line of thinking, but it makes sense. Come to think of it, in this sense, games can be allies, even if not the main tool. But the teacher agrees that the foreign language should not be mandatory, especially because of the localized cultural products that we have in Brazil.

“I don’t think anyone is obliged to do that anymore, the Brazilian dubbing culture has become an incredible industry that works very well. To give you an idea, in Germany everything is dubbed. The population almost all speaks English because the teaching there has a great focus on it, but even so, they prefer to watch dubbed because they appreciate the local culture of dubbing”, he revealed.

You are the exception, not the rule.

I do not intend to identify people who participated in the discussions on Twitter about the controversy involving translated games or not, but some of the main arguments to defend non-localization involved the claim that “games teach English”.

Those aged 20 and under may not be familiar with the situation, but having games in Portuguese in Brazil was an extreme rarity. In the 90’s only a very few computer games had this treatment. It was only from 2005 onwards that titles began to receive due attention in relation to translations. This was due to the official presence of companies in the country, such as Sony, Microsoft, Warner, Ubisoft e SHE, which started to launch some of their main translated products.

In the 80’s and 90’s we were forced to play games in English, from the simplest to the most complex. With the ease of access to piracy, it was also not uncommon to have some RPG in Japanese in the library, especially because of the delay they took to reach the West. This forced us into a situation: fix it or not have fun. Result: many games that were played but not understood. Experiences that may have been marked, but that would be much better enjoyed with proper translation or knowledge of the original language.

But we had examples of people who learned from it. Players who, from then on, became interested in English and decided to learn and develop over the years – and who today speak fluently and can sustain a conversation or write a text of a few paragraphs.

“I think learning by playing, reading, following something you like is an amazing way to learn. It doesn’t mean that you are bigger or smaller than anyone, it means that you discovered what works for you and applied it”, added teacher Patrícia to the technoblog. “But there are people who do not know how to apply or are not interested. Also because you don’t need to speak a language perfectly to be fluent or communicate”, he added.

But she hits the hammer: to go deeper, just studying. “Now, if you want to teach, then you have to study, know the names of things correctly, understand didactics, in short. Of course, if you have someone to guide you, your learning will be more complete”.

So yes, it’s possible that you started learning English around 10 or 15 years old by playing an English copy of Final Fantasy 8. But it doesn’t mean that he became fluent or experienced at the same time, nor that he didn’t develop it more, either at the school itself – since English is a very common subject in most of them, in Brazil – or in courses and extra readings he took. throughout life.

You are the exception. That’s not to say that it works for everyone and maybe it has more to do with their social context than with games. If it happened to you, great, but, as a rule, it is necessary to learn English through an active and constant educational process. Remember that we are talking about a bubble, just take a look, again, at the numbers I quoted above.

How much does it cost?

Why do we still have companies that release games without translation in Brazil, if there is a clear demand in the market, which wants to house more and more players?

Is translating a game expensive? It depends on a number of factors. If it includes dubbing, for sure. But let’s assume that a company wants to launch a game with only subtitles and menus localized for Brazilian Portuguese – how much would it spend?

The answer is that there is no answer, at least not standardized. Costs and values ​​vary according to the studio or company responsible for the translations, but you can get an idea. That’s why I talked to a source who prefers not to be identified, who worked on some translated games that are on the national market, but that came from foreign companies.

“One thing I guarantee you is that the account is done on a word count basis,” the source told technoblog. Thus, a game with a lot of text will always be more expensive than one with less. In other words, an RPG in the style Final Fantasy Where Dragon Quest will always cost more than a platform game like Super Mario Where Sonic.

A calculation that the source gave me was 10 euro cents per word, that is, around R$0.60 according to the current exchange rate at the time of writing. He further informs me that a famous foreign western RPG had 2 million words in total, which would cost around R$1.2 million, based on this calculation, just for translation work, estimating roughly.

It doesn’t seem like a low value to me, but we have to remember that we are talking about companies that report increasing profits, not to mention the cash return that the sale of a game guarantees. There is also the fluctuating price factor: this was the estimate of one person who worked in a studio, there are many others who can work for less or bring better pricing conditions. After all, there are independent companies, much smaller than Nintendo or Sony, for example, that only release their games here translated – the cost is not prohibitive, if you know where and how to do the work.

The role of fans

If we come to the conclusion that translating games for the Brazilian market is viable and necessary, how are we going to direct companies in this direction? The good news is that most of them already do this. In addition to independent developers, companies like Activision, Ubisoft, EA, Sony and Microsoft have released their titles with some localization, with very few exceptions. The bad news is that there is still a long way to go.

That’s where the community comes in and the fans come in. This special, by the way, was motivated by recent campaigns carried out on social networks, in addition to the endless discussions about whether or not to translate games to Brazil.

In mid-2021 Brazilian fans of Nintendo started a campaign on social networks, especially on Twitter, to ask the company to translate more games released in Brazil into Brazilian Portuguese. The initiative was born from the community, after the announcement that Mario Party Superstars would be translated into our language.

Since then, Nintendo has done little. Launched a video on YouTube with a foreign executive speaking Portuguese, but with zero news of more localized games coming this way. This also led us to another campaign, more recent and still ongoing, so that The Legend of Zelda: Breath of the Wild 2 be located.

So far, the only successful campaign has been to Sonic Frontiers. Players asked Sega to look kindly at Brazilian fans and were answered a few days later, with an official announcement of translation plans.

It may seem like a thankless role, but it gives results. In the end, it is with the fans that the purchasing decision power and the main influence in the market lie with the fans. It is now necessary for a part of the community to become aware of the need for more of this benefit for games in Brazil – and so that everyone covers it so that companies do what is necessary.