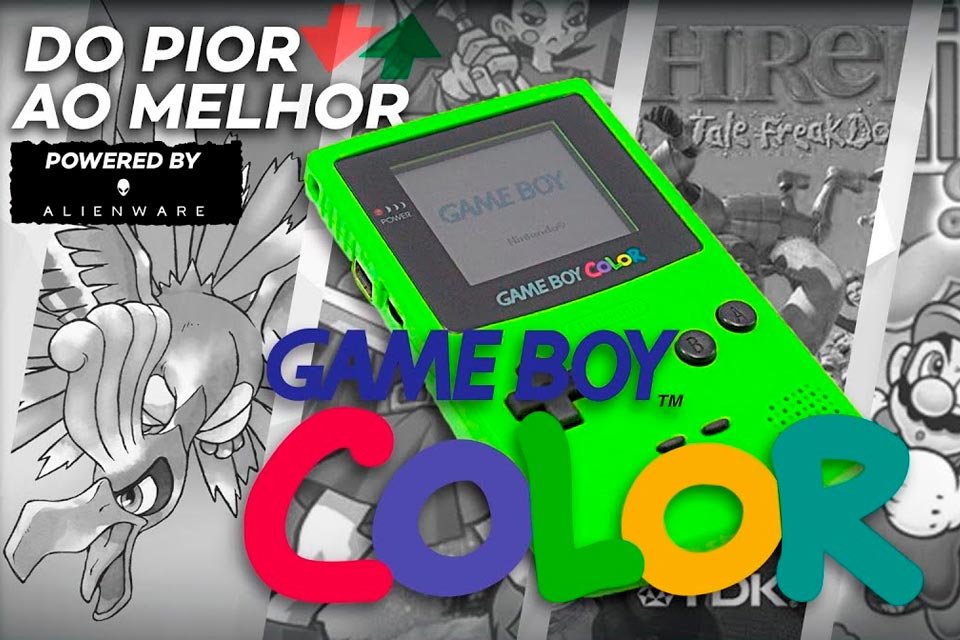 Portable consoles are essential items for those who like to play their favorite games wherever they are, but they weren’t that popular until the late 80’s and early 90’s.

Nintendo saw that this market would make a lot of money and bet with everything, so much so that it launched some of the best pocket consoles in history. It was almost at the turn of the century that she realized that everything is more fun when you add colors. Welcome to another episode from the Best to the Best of consoles with Game Boy Color. Here are our criteria, pay close attention:

Let’s start with the “awful” ones then!

Dogz, launched in 1999, puts the player in charge of a virtual pet puppy, with three different breeds of dogs and several toys to be used. Animals have visible statuses such as happiness, energy and hunger, and it’s up to the player to deal with them as best they can.

Analysts weren’t won over by the digital cuteness, criticizing the low activity, weak graphics, static animations and gameplay that didn’t match the console at all.

And, for those who didn’t know, we had a colorful shooter game on Nintendo’s handheld console. Ultimate Paintball, released in 2000, has players strafing themselves with paintballs. The title has a first-person view and also a top-down camera, to facilitate moving around the map. The main mode is Capture the Flag, but there are also some balloon-shooting minigames.

Analysts were not at all pleased with him, saying he was silly, aimless and not at all funny, being called by some of the worst words you can imagine.

The Mask Of Zorro, released in 1999, is the classic bad game case based on a good movie. In the story, Governor Don Rafael Montero refuses to relinquish his control over Spanish California and it’s up to our masked hero to put an end to the tyrant and, in addition, marry his daughter.

Even though their music is fun and the fencing match is interesting, everything else is bad. It’s extremely difficult, even disloyal, the soundtrack is repetitive, the sound effects are sparse, the visuals are ugly and the controls are weird. Basically nothing is saved here.

Godzilla The Series: Monster Wars, released in 2000, is a sequel to Godzilla: The Series and accompany the Daikaiju confronting alien-created mutants to save planet Earth. The game has ten levels in different locations, such as deserts and cities.

The problem is that it doesn’t take advantage of the fact that it’s a Godzilla game at all, being a side-scrolling shooter with absolutely nothing special, just serving as an easy way to make money. It turns out that Crawfish Interactive, the title’s distributor, went bankrupt in 2002, so it’s not like they’ve made much of that money.

The title was well criticized for its repetitive songs, limited gameplay and very low difficulty. At that time, Midway’s finances were still good, so the bad work done by Digital Eclipse wasn’t too bad. Nowadays, after everything that happened, it is almost certain that Ed Boon regrets having released this game.

Men In Black: The Series, released in 1999, is not based on the movie starring Tommy Lee Jones and Will Smith, but on the cartoon that aired between 1997 and 2001. The game has three difficulty levels, 12 alien races, several weapons and six environments.

Even if it sounds like a lot, know it’s not. Analysts say it even has good cutscenes and nice visuals, but its gameplay is horrific, the controls are sluggish, and all levels are the same regarding gameplay. Nothing more and nothing less than a complete waste of potential.

Shrek: Fairy Tale Freakdown, released in 2001, is the first game based on the movie theater’s most beloved Ogre franchise. It is a 2D fighting game that features a total of nine playable characters and nine different areas.

There’s no doubt he’s just awful. Analysts point to the lack of punches, the simply non-existent strategic gameplay and the extremely repetitive fights. If this game were an onion, it would definitely be a rotten one.

Now, let’s move on to the best.

Donkey Kong Country hit the markets in 2000 and is a re-release of the classic Super Nintendo title. The title reuses much of the original game’s assets, but suffered some downgrades due to the console in question. Even so, the game had new features, such as a bonus mode, an unprecedented level and a reimagined level.

Analysts praised the fluid and fast gameplay, but it ended up receiving mild criticism of its graphics due to lack of detail. The game was extremely well regarded for being very faithful to the original title.

In 1998, the Tetris DX, which is an improved version of Tetris released for the Game Boy in 1989. In addition to the default modes, it added two new ones: the option to save your progress and colorful graphics, as you’d expect from the Game Boy Color.

The original version had been a big hit and this one was no different. Analysts loved the new modes and colors, considering it the new king of handheld video games (at least until now).

Legend Of Zelda – Link’s Awakening DX, released in 1998, is a deluxe version of the game first released in 1993 for Nintendo’s first handheld console. The game takes place after the events of A Link to the Past, with the protagonist waking up in Koholint, a place protected by the entity called Wind Fish.

This version introduces not only colors to the game, which is one of its main differentiators, but also an unprecedented optional dungeon, bug fixes and reimagined areas.

Like the original version, the game was very well regarded by reviewers at the time, being praised mainly for its colorful graphics, several improvements and new content added.

The game was highly praised primarily for being everything the original title was, but with improvements. Besides, the possibility of being able to play it absolutely anywhere made the title even more attractive.

It couldn’t be different: it was obvious that it was going to appear The Legend of Zelda: Oracle of Ages, released in 2001, on this list. In it, Link is sent by the Triforce to a forest in Labrynna to save the goddess Nayru who has been possessed by Veran, the shadow sorcerer.

The gameplay is very similar to Link’s Awekening, with the same controls, graphics and sounds. The central item in the title is the Harp of the Angels that Link uses to manipulate time and travel into the past.

The version was highly praised for its beauty, creativity and meticulous attention to detail. It was considered the pinnacle of Game Boy Color graphics. The sound has received criticism, but the console itself can be blamed more than the title.

The Legend of Zelda: Oracle of Seasons, launched in 2001, arrived on the markets together with Oracle of Ages, but it has a totally different plot. Link is sent to the land of the Holodrum by the Triforce, where he witnesses General Onox kidnap Din, the oracle of the seasons, with the aim of destroying the place.

Different from Oracle of Ages, the central items of the title are Rod of Seasons, a stick that allows you to change the seasons, changing the entire look of the map according to the player’s choice.

The game was well praised, as well as Oracle of Ages, for its visuals, original ideas, clever puzzles and action-focused gameplay, although its sounds aren’t a big deal due to the company’s pocket console.

And to close with a “golden key”: we have Pokémon Gold & Silver, released in 2000. The game is from the second generation of the franchise and takes place in the region of Johto and has the initials Totodile, Cyndaquil and Chikorita.

In the added features we have many such as a real-time clock that has days of the week and that affect the appearance of certain Pokémon, little monsters can hold items, new Poké Balls were added, as well as Pokégear, opponents can call you for rematch or tell where legendary monsters are, new Steel and Shadow types have been added, and new moves have arrived in the game. A flurry of news.

For critics, the game managed to improve everything that the first presented, with substantial innovations and that affected the gameplay a lot, this in a positive way. Mechanics, items, internal clock and many other things were extremely well regarded.