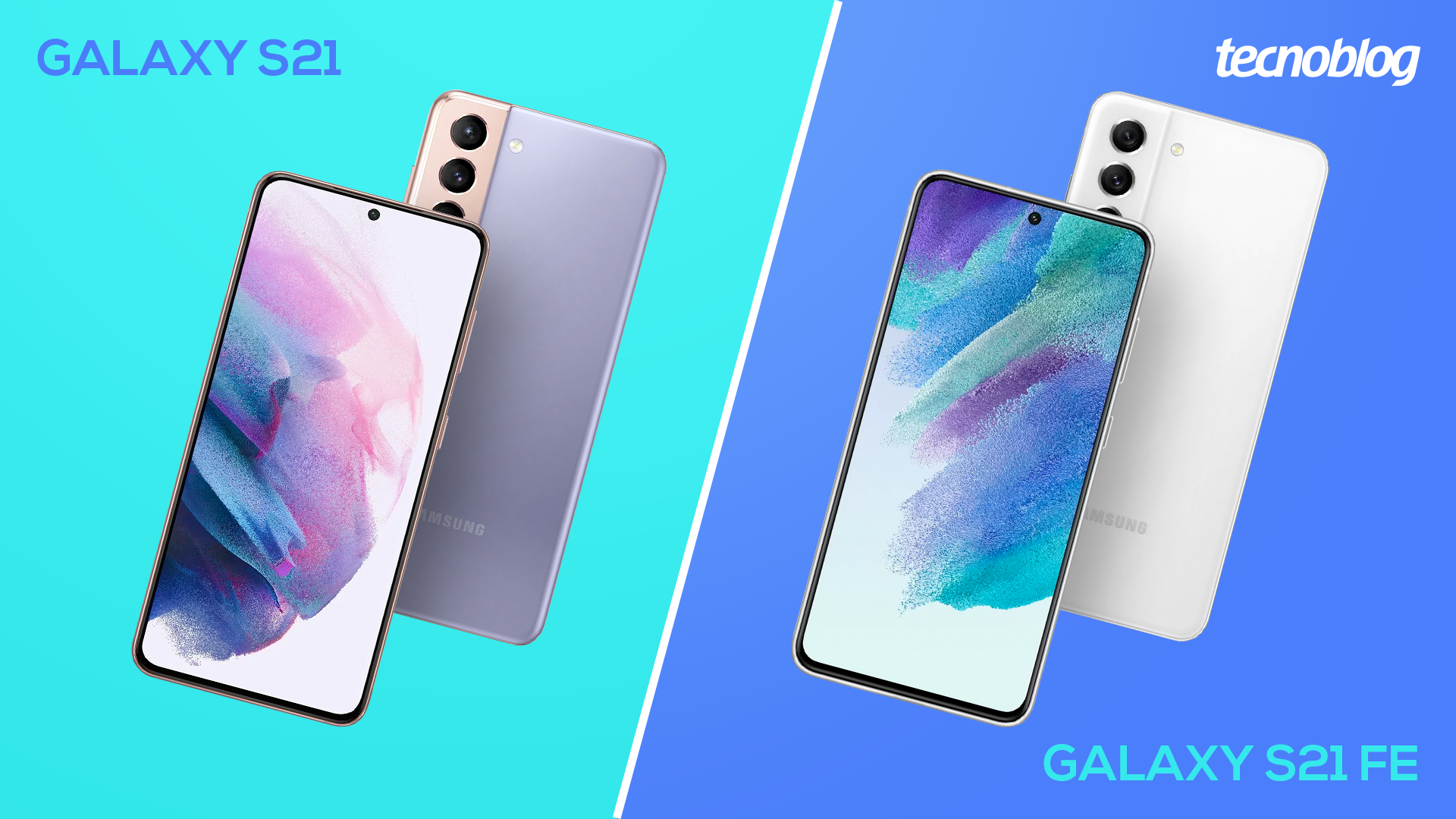 It took a while, but the Samsung launched the Galaxy S21 FE in January 2022. The cell phone marked its debut in Brazil with Android 12 from the factory, advanced technical sheet, triple camera and the same look as Galaxy S21, a smartphone announced in early 2021. But what is the real distinction between the phones revealed a year apart? Check out the comparison below and get to know the details of the duo.

Android 12 out of the box

Android 12 is one of the main attractions of the Galaxy S21 FE. Even though the Galaxy S21 received the update in December 2021, it is likely that the latest model will be updated for a longer time. This is because Samsung promises three versions of the operating system and four more years of security updates, possibly taking it up to Android 15.

The Galaxy S21 came into the world with Android 11 and the same promise. That is, the phone of the South Korean brand is expected to be updated only until Android 14, when the new version is released by Google to all users. The availability of security packages follows the same rule: four years.

Yes, placing the cell phones side by side, it is difficult to say who is who. But there is one crucial difference that could be a game changer for some people: the Galaxy S21 FE has a 6.4-inch screen while the Galaxy S21 has a 6.2-inch panel. The phone is still smaller than the Galaxy S21+, which is 6.7 inches.

Otherwise, the duo’s specifications are similar. Both models have a 2X Dynamic AMOLED panel with Full HD+ resolution and a refresh rate of 120 Hz. The other features in common are the straight sides and, of course, the hole to house the front camera located in the central portion of the display.

The photographic set is also similar. Let’s start with the look, since the base that houses the sensors is literally the same. That is, the two Samsung Galaxy phones organize the components in a vertical row. But there is a difference in the arrangements.

The Galaxy S21’s telephoto camera, on the other hand, is 64 megapixels. Although it needs more tests to prove it, this is a difference that can give some advantages when taking photos with zoom. But the FE variant has a 32 MP front camera while the conventional edition has 10 MP.

Samsung’s phone launched in early 2022 also has a slight advantage in terms of battery. The smartphone comes with a 4,500 mAh component. The S21 has a 4,000 mAh part. In common, the duo still has a reverse charging system (Wireless PowerShare) and wireless charging.

Brazilian users, however, take less RAM home when buying the Galaxy S21 FE. This is because the cell phone is on sale in Brazil with only 6 GB. Meanwhile, the Galaxy S21 is still available in stores with 8 GB.

That is, the S21 tends to support more applications open simultaneously than the S21 FE.

Brazilian edition with the Exynos 2100 processor

Still, there are similarities in the datasheet. This is the case of the Exynos 2100 processor, an octa-core chip that is present in the entire Galaxy S21 line sold in Brazil. In some countries, Samsung sells all four phones (S21, S21+, S21 Ultra and S21 FE) with the Qualcomm Snapdragon 888 processor.

There are other points in common in the datasheet that deserve to be highlighted. This is the case with support for 5G and Wi-Fi 6. Cell phones still have Bluetooth 5.0, NFC for approximation payments with Samsung Pay and GPS. Both also have a USB-C port and do not have a dedicated headphone jack (3.5 mm).

128GB of space, but no microSD

Another similarity is the storage. In Brazil, Samsung chose to sell only the Galaxy S21 FE edition with 128 GB. The same happens with the Galaxy S21, which is available in the national market with the same amount of internal memory.

The absence of a memory card slot is also common. In 2021, Samsung removed the entry to insert the microSD in Galaxy S21 line phones. A year later, the decision remained standing and was also carried over to the Galaxy S21 FE.

Face of one, snout of the other

As stated earlier, the pair are so similar that it’s easy to confuse them. Both models have a plastic back and the same base that houses the triple photographic set. The flat screen with thin edges and a hole to house the front camera also enter the list of similarities between the two models.

Both are also IP68-certified and have multiple color options. You can find the Galaxy S21 in white, grey, pink and violet options. In the case of the Galaxy S21 FE, Samsung markets the cell phone in white, black, violet and green.

So, which one to buy?

The two cell phones have so many features in common that it is a little difficult to point out the differences. Still, this does not mean that the two are the same. As we can see, there are differences in specific points, such as the Android version, amount of RAM memory and the like. But in the end, which one to buy?

Looking only at the technical sheet, the Galaxy S21 tends to be a slightly more powerful option. This is because the cell phone has 8 GB of RAM, which tends to help in the execution of many tasks at the same time. In addition, as it has been on the market for about a year and with the arrival of the Galaxy S22 expected in February 2022, this model will also tends to be found with lower prices at first.

The Galaxy S21 FE is a newer model, and will possibly receive an update for a longer time. There’s also the advantage of a slightly larger screen that isn’t quite as big as the Galaxy S21+, which might be a welcome addition for some people. The flip side is that the smartphone has some lower specs like the 8-megapixel telephoto lens camera. That is, he is almost completely similar, but not the same.