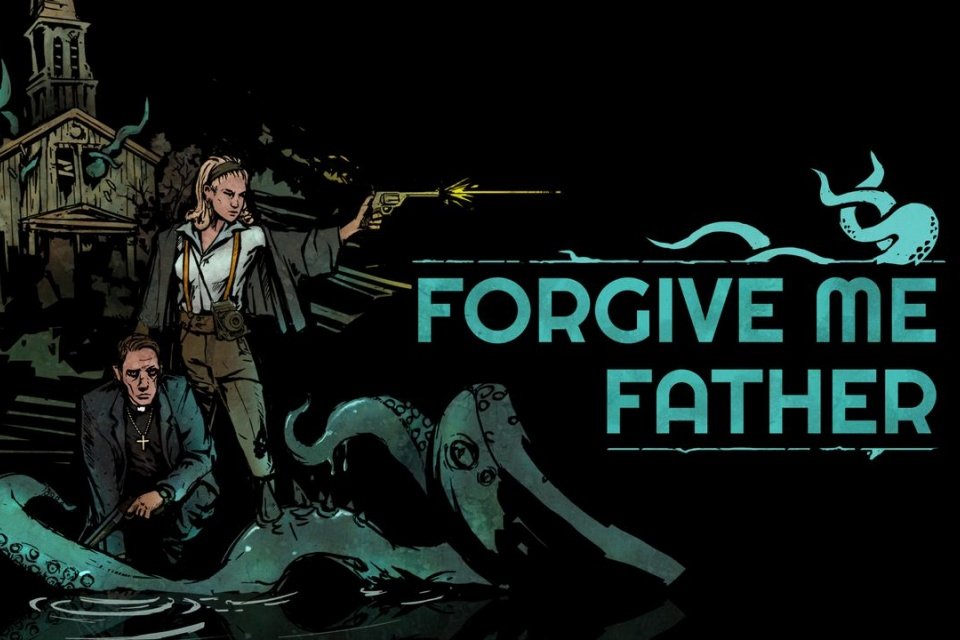 HP Lovecraft’s cosmic horror universe is extremely known for fascinating a legion of fans, serving as inspiration for several works in the entertainment world, including several games, such as Call Of Cthulhu, Bloodborne e Amnesia: The Dark Descent.

Embracing this world of insanity filled with monstrous beings, developer Byte Barrel released on October 26 the early access version of Forgive Me Father, a retro FPS with a HQ-style look.

But is it worth venturing on this terrifying journey, especially since it’s not yet complete? Check out our review to find out!

In Pestisville, a city in New England, United States, an unfortunate priest wakes up and discovers that he is the only survivor of a probable post-apocalyptic event. To survive, he must deal with zombie-like creatures and other Lovecraftian horrors, yet find a way to escape the scene and find answers to the disaster that has taken over the world. After all, did someone perform a ritual they shouldn’t? 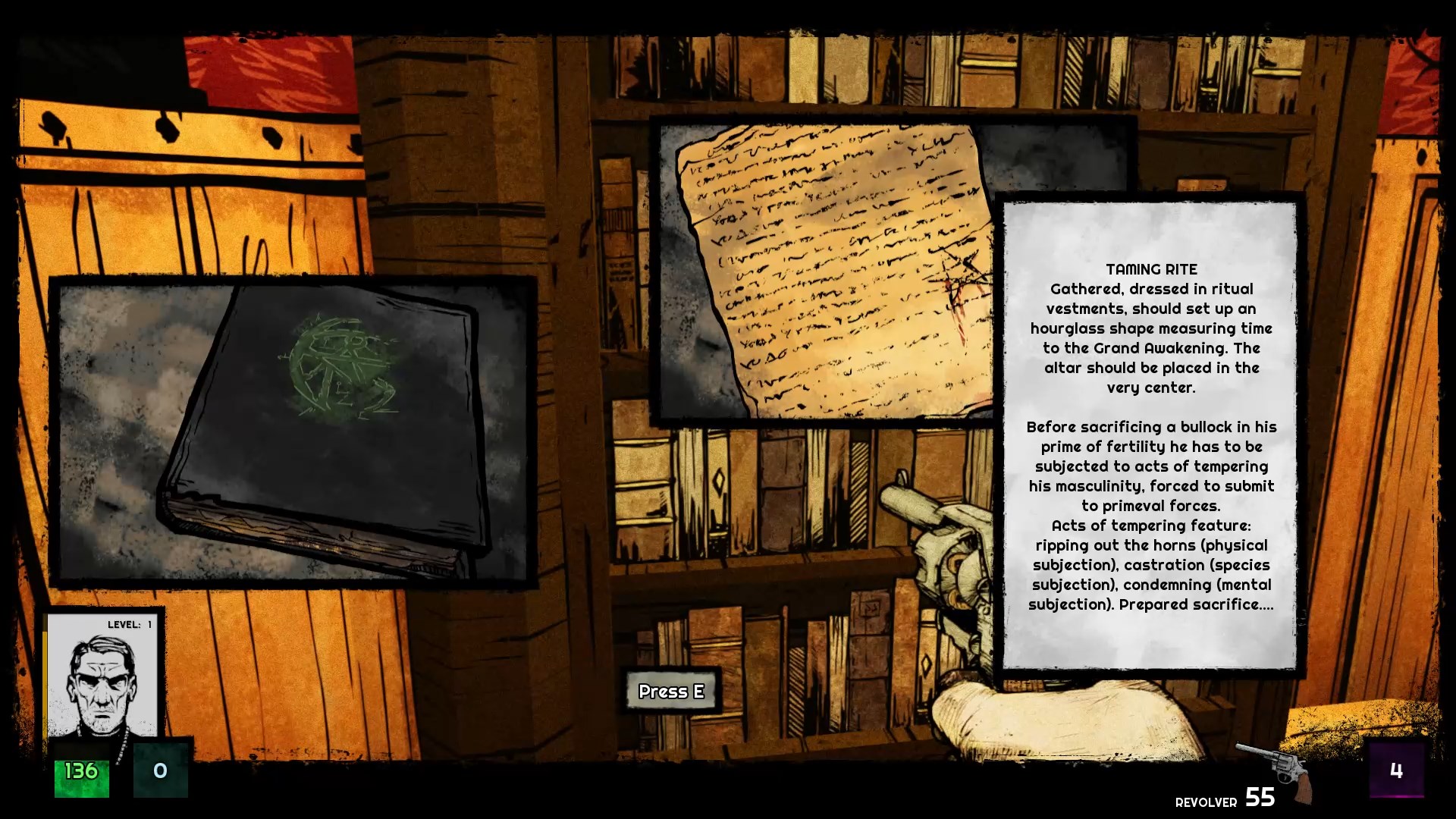 The plot of the title is presented little by little through texts found throughout the stages. As interesting as it is, it is still somewhat confusing, generating more questions than answers with the ambiguous information presented. It is necessary to pay close attention to try to unravel the mystery behind the chaos that the protagonist is living, and even then we may never fully understand (which is the face of Lovecraft’s works, right?). 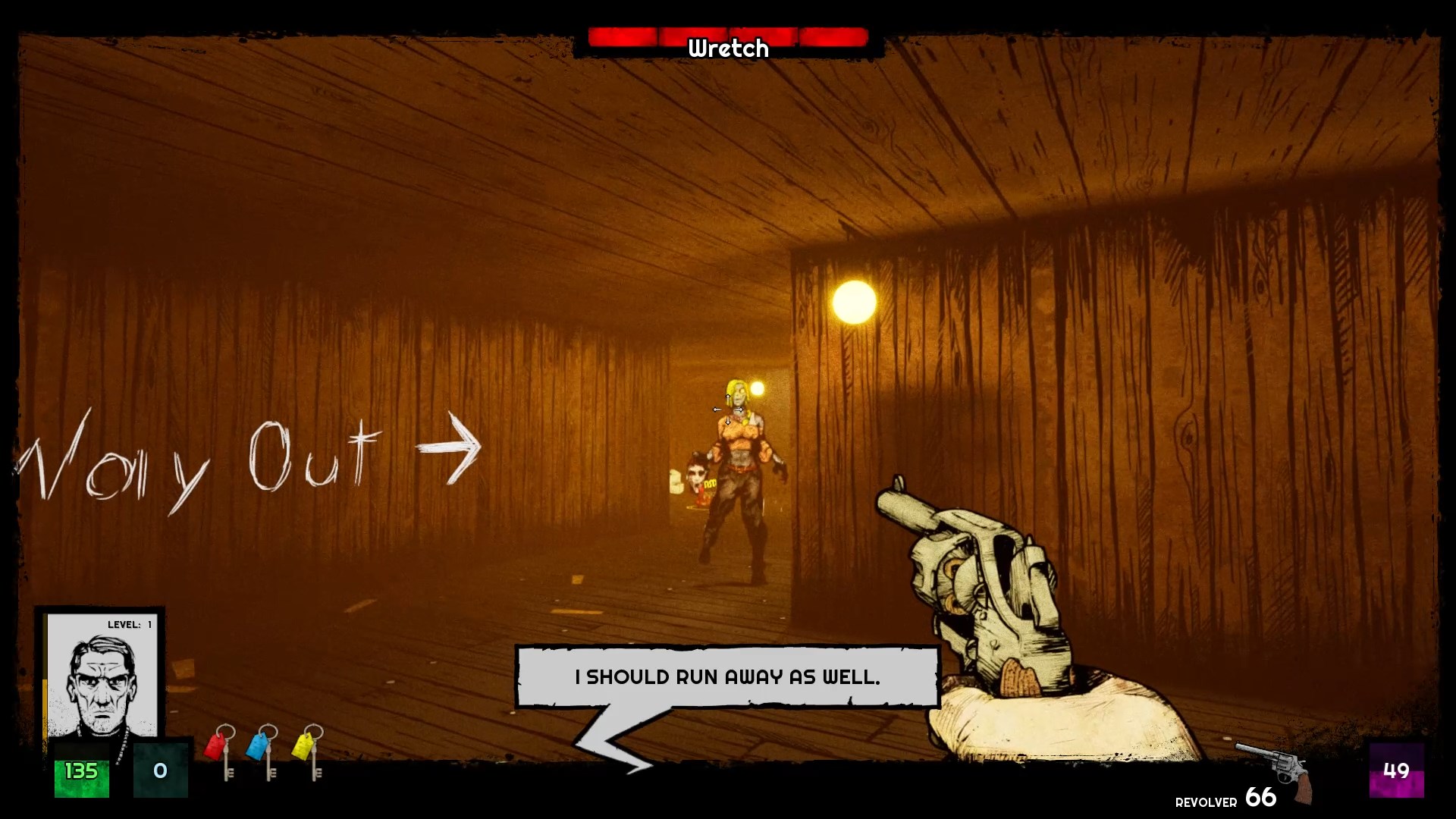 Even with a dark theme, the game has its funny moments. Some zombies carry a head in their hands, and when they take a headshot, they use that “reserve” to continue forward with the attack. The only other survivor we find during the game serves as a way to save his progress through the levels, and he’s clearly so drunk that he doesn’t even care about the monsters around him.

The comic-like graphics and soundtrack create an interesting immersion in this universe full of panic and horror, and the variety of enemies — fifteen different types at the moment — is a good way of not making combat tedious. In addition, the monsters’ “locked” movement gives a fun feeling of being thrown headfirst into a horror comic with a generous helping of gore.

on the brink of madness 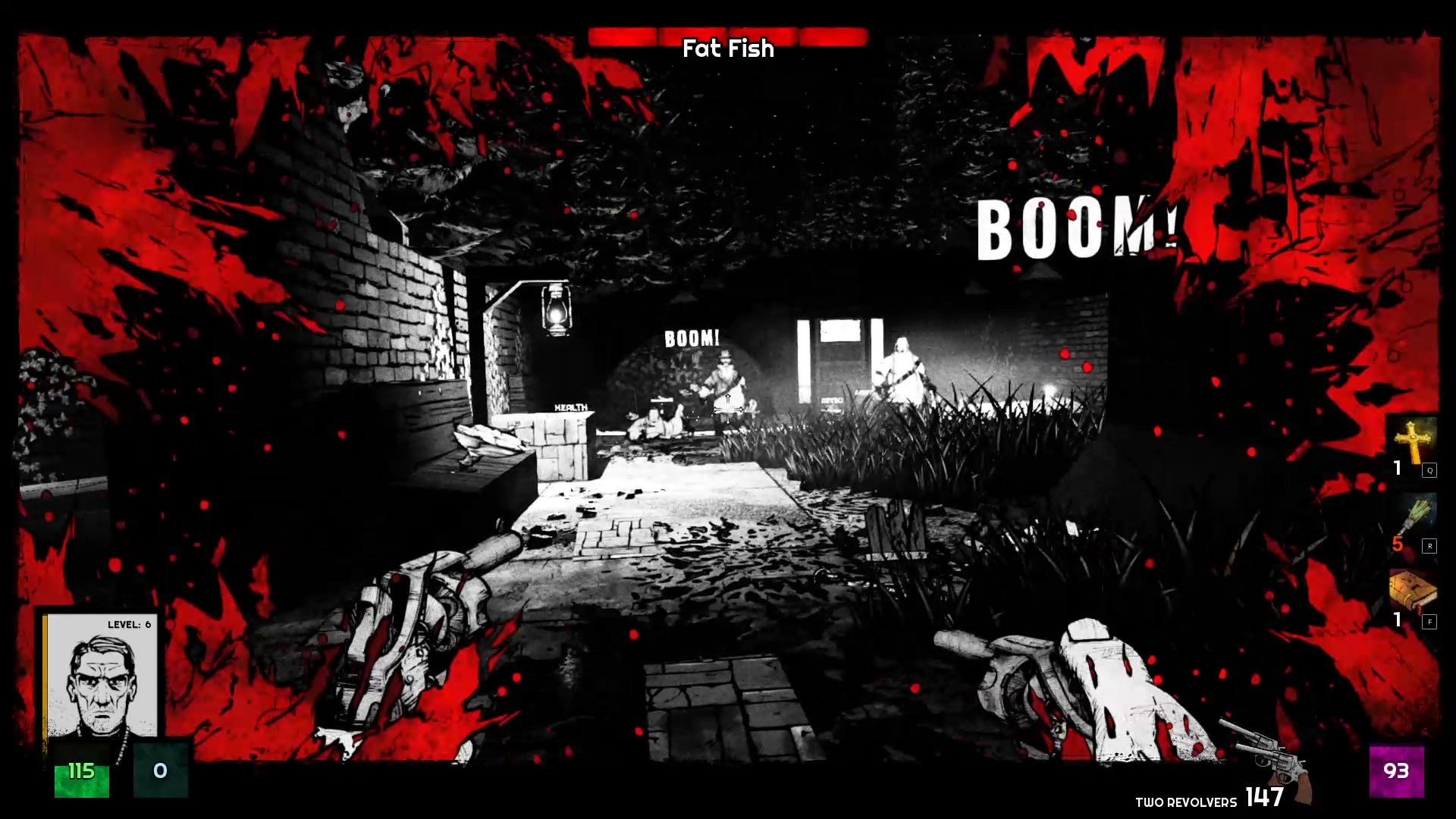 One of the mechanics presented at the beginning of the game (besides how to shoot, of course), is the insanity bar, which increases as you defeat enemies or consume alcohol. The bigger it is, the more damage the protagonist does, and at the same time, he loses less life from opponents’ blows.

With this bar, it is also possible to activate the use of four special items that help a lot during battles, with abilities for a short period of time, such as healing, immobilization of enemies, resistance to attacks and zero ammo cost. They can be enhanced with skill points to make their effects longer or more effective. 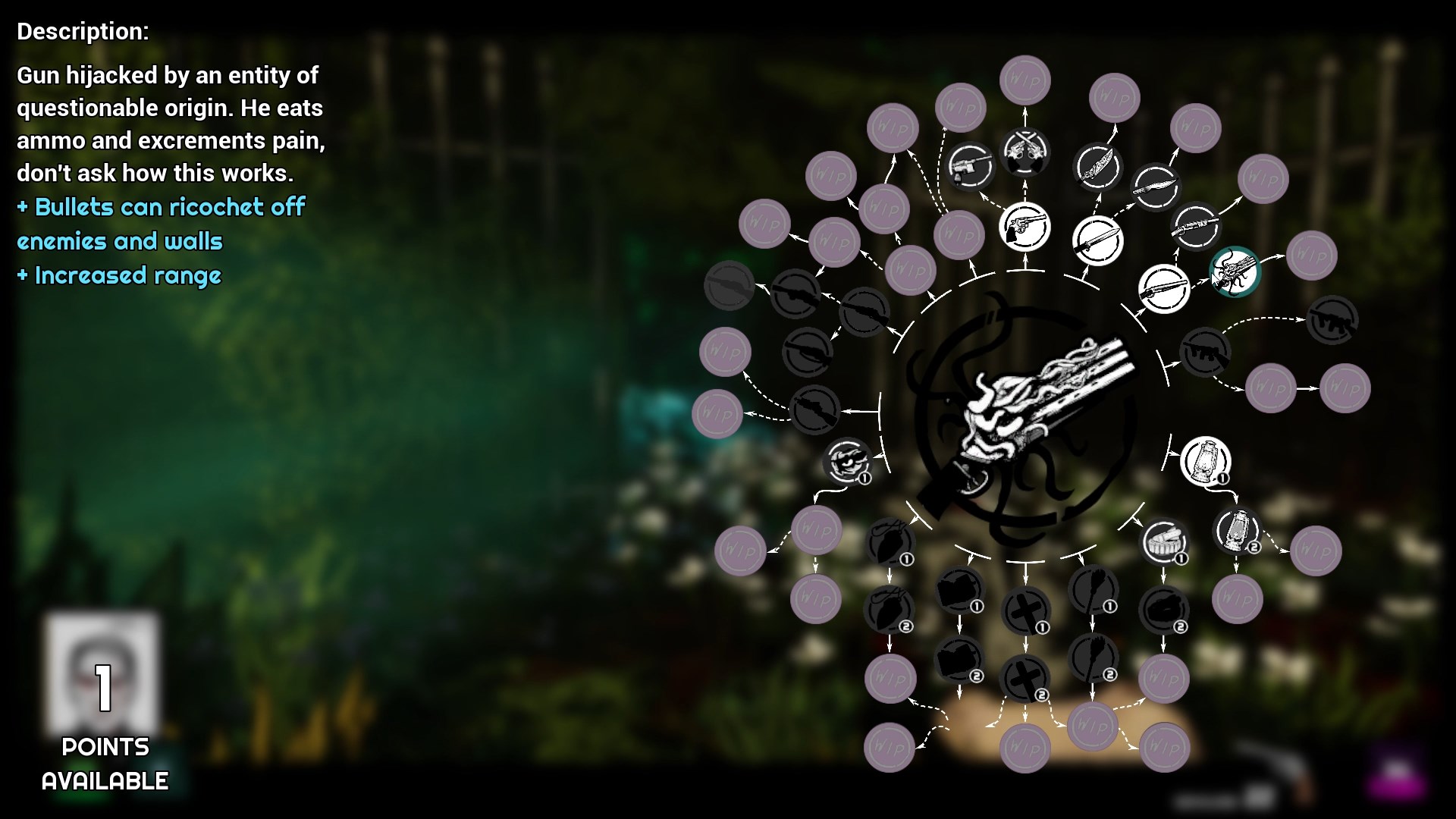 And like every good FPS, Forgive Me Father brings an interesting amount of weapons to use to put an end to the monstrosities along the way. They are presented as the levels go by, and the coolest thing is that you can improve them as the character goes up in level. After all, who has never wanted to use a shotgun taken by an entity of questionable origin, which eats ammunition and excretes pain?

Overall, the gameplay is extremely fun and doesn’t get monotonous, with the different weapons and items letting you choose your favorite strategies to deal with the thousands of scary beings that want to end your life, and move on to the next map. 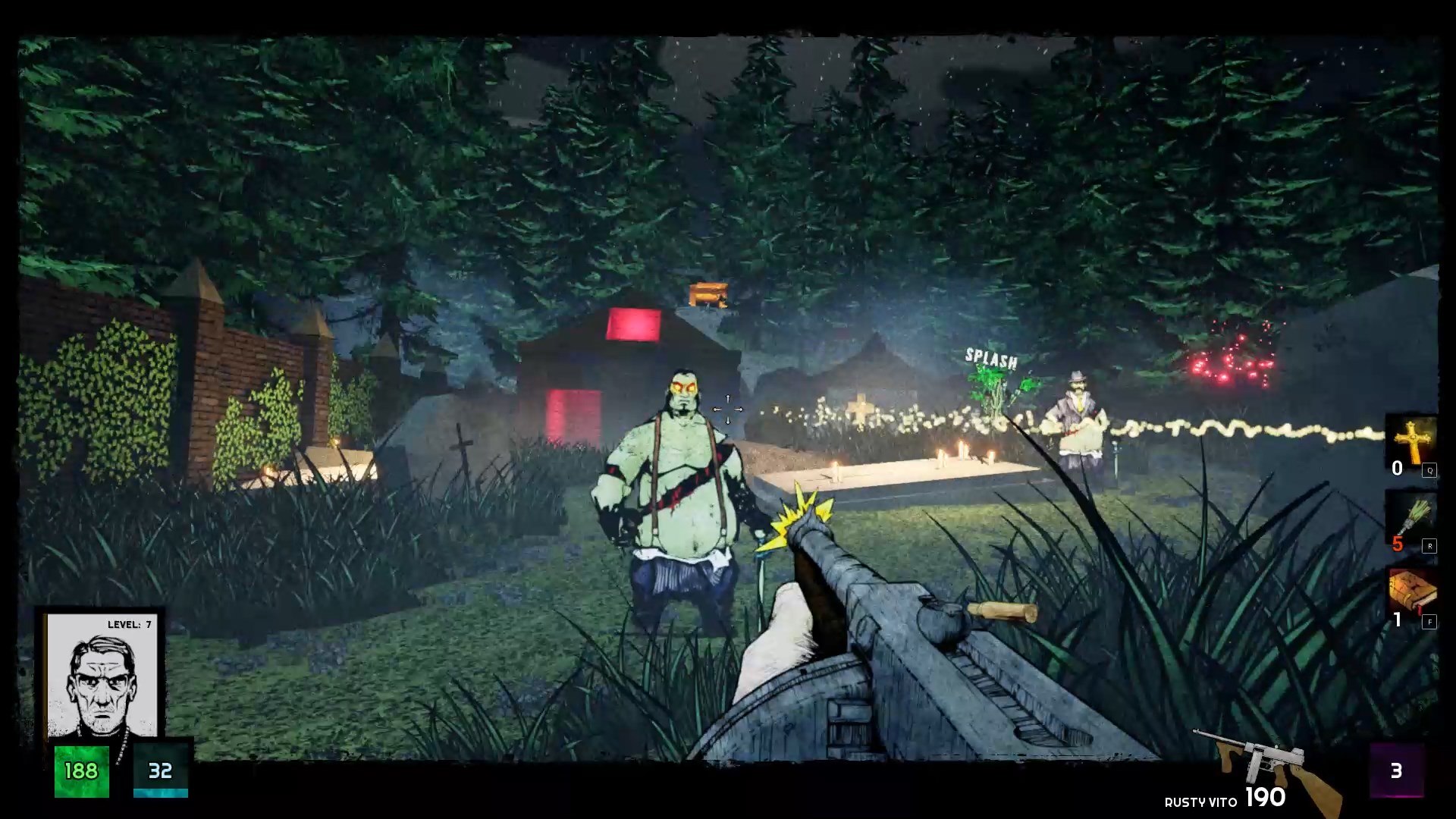 My only caveat with the game was the lack of Field of View (FOV) control, which helps a lot to avoid bouts of seasickness in titles of the genre. I confess that after having to keep myself in constant motion while facing an absurd horde of enemies, I had to stop for a while to avoid the discomfort caused.

However, it’s worth remembering that it’s not complete yet, and the developer may decide to add this function in the future, which would really be a great idea — and my maze would be very grateful!

Even in Early Access — which has approximately half of the content programmed for the game — Forgive me Father is an excellent retro FPS, with very interesting gameplay and theme, being a good option to turn off your head and relieve stress with a good dose of “shot, hit and bomb”.

Byte Barrel has already stated that the full version will feature more weapons, enemies, bosses, maps and even another playable character. However, it’s definitely worth giving the game a try now, as well as checking out in 2022 everything the developer still intends to add to this journey full of chaos and insanity.