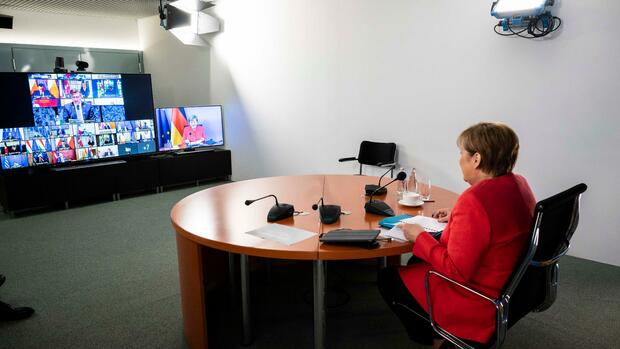 Brussels The fifth video conference of the EU heads of government since the outbreak of the corona crisis came to an end quickly, it has not brought tangible results. As expected, the 27 heads of government were unable to agree on the corona development package worth € 750 billion. “The bridges that we still have to build are large,” said Chancellor Angela Merkel after the meeting.

Nevertheless, there seems to be a first approximation. The so-called “Frugal Four”, the Netherlands, Austria, Denmark and Sweden, have apparently given up their fundamental opposition to non-repayable financial aid for the EU countries most affected by the corona crisis.

Austria’s Chancellor Sebastian Kurz showed willingness to negotiate: he did not completely reject subsidies. His country attaches importance to the fact that the planned billions of loans and grants should only be spent on meaningful projects such as digitization and greening. At the same time, Kurz emphasized that it had to be a one-off campaign with a tight time frame.

Danish Prime Minister Mette Frederiksen said: “Things take time if so many countries are to be united.” The Danish side is fighting to reach an agreement as soon as possible. “Hopefully that could mean in the course of July,” Frederiksen was quoted by the Ritzau agency.

Dutch Prime Minister Mark Rutte continues to reject non-repayable grants to countries particularly affected by the pandemic. The EU Commission has only recently found that public debt in the EU is sustainable.

So it was enough to lend to the countries affected by the corona crisis, Rutte said. He thus contradicted the argument of the southern Europeans that highly indebted countries like Italy could no longer cope with additional loans and therefore needed non-repayable aid from the EU.

The EU Commission proposed a reconstruction plan with a volume of 750 billion euros at the end of May. Of this, 500 billion are to be paid as non-repayable donations to EU countries that have been particularly badly affected by the corona crisis, the remaining 250 billion euros are to flow as loans.

The EU Commission wants to finance the program with European bonds. She wants to repay the debts from 2028 to 2058. Opposition to the plan comes mainly from the four Member States mentioned. All countries are net contributors to the EU and at heart they are opposed to funding EU subsidies, particularly for southern Europe, which has been hard hit by the corona crisis.

Germany fundamentally supports the reconstruction plan, but disagrees with some elements. Chancellor Merkel demanded that the money flow out faster than the Commission had planned. At the same time, she admitted that no money could flow before January 1 next year. The EU Commission actually wanted to start granting aid in September.

EU Council President Charles Michel wants to start negotiating with the 27 member states on the corona development program. He is aiming for another EU summit in mid-July, at which decisions will then be taken. Until then, the following issues must be resolved:

The EU Commission has proposed a package totaling EUR 750 billion. This is clearly too much for the “economical four”, and Finland also raised an objection. Germany and France had suggested a 500 billion euro reconstruction fund – a third less than the Commission.

On the other hand, some Southern Europeans could well imagine dimensioning the development plan even more generously than suggested by the Commission.

Ursula von der Leyen wants to transfer two thirds of the total volume to Member States as transfers and the last third as a repayable loan. The Netherlands and Austria completely reject transfers from the reconstruction fund.

The Scandinavian EU countries want to at least reverse the relationship between transfers and loans. France and the southern Europeans insist on non-repayable donations and want to keep the loans as short as possible.

Loans received from the EU are added to the national mountain of debt – a problem for countries that are already heavily indebted.

The EU Commission wants to get the money for the reconstruction on the financial markets. The Commission would like to take 30 years to pay off the debt – from 2028 to 2058.

It takes too long for several EU countries, including Germany and Finland. Repayment should begin during the current financial period (2021 to 2027) and should only last for twenty years, EU circles said.

France, Italy and Spain are not interested in a quick repayment.

The EU Commission wants to pay out most of the reconstruction aid in 2023 and 2024. The majority of Member States believe that this is far too late. The economic consequences of the pandemic should now be dealt with, not just in two or three years. That is why the money from Brussels has to flow faster.

What conditions must recipient countries of the new EU subsidies meet? Best none at all, says Italy. The government in Rome forbids any interference by the EU in its economic policy.

By contrast, the Netherlands insists that there are tough economic policy requirements. Countries like Italy are only likely to get the money from Brussels if they finally tackle delayed structural reforms.

The conflict of interests surrounding conditioning is likely to become the biggest problem in the negotiations on the reconstruction package. “In the end, this is perhaps the most important point for the Netherlands,” it said in Brussels.

The EU Commission intends to use three criteria to distribute its billion-dollar fund among the member states: the decline in total gross domestic product and per capita and the rise in unemployment as a result of the corona crisis.

According to this, Italy, Spain, Greece and Poland benefit above average from the development fund. Poland and Greece were only medically affected by the pandemic.

But since both countries suffer from high unemployment, they get away well with the distribution of EU subsidies. This does not apply to Belgium, although the country had a particularly large number of corona deaths. Ireland, Hungary, the Czech Republic and Lithuania also feel disadvantaged.

The EU Commission wants to help companies that are in need of existence as a result of the corona crisis, especially in those EU countries that themselves have no financial scope for the multi-billion-dollar aid programs for the economy that Germany is currently affording.

For its part, the German government fears that EU solvency aid will be misused to keep unprofitable companies artificially alive. In Italy, for example, one thinks of saving ailing steelworks, it said in Brussels. Elsewhere, aid for loss-making airlines is mentioned.

The EU Commission wants to remove aid from the reconstruction fund if the recipient country permanently violates the EU’s constitutional principles. The Western European Member States support this, but the Eastern Europeans are strictly against it.

In the struggle for the reconstruction fund, however, the Eastern Europeans are not a closed front. The Visegrad group – consisting of Poland, Hungary, the Czech Republic and Slovakia – does not pull together, it said in Brussels.

Poland and Slovakia were among the financial winners, and they promptly responded positively to the reconstruction plan. In contrast, Hungary and the Czech Republic see themselves on the losing side.

So far, both countries have always been keen on the highest possible EU subsidies for agriculture and structurally weak regions. Now they would suddenly fight alongside the “Economical Four”, mocked an EU diplomat.

More: EU heads of government discuss reconstruction plan – no compromises are in sight