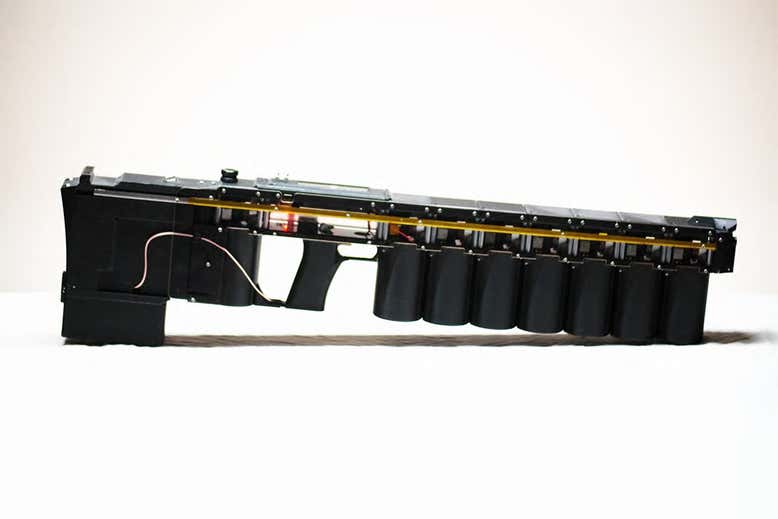 An electromagnetic weapon is on pre-order in the United States: the GR-1 “Anvil” (GR-1 anvil), produced by Arcflash Labs (a Los Angeles company specializing in industrial pulsed energy devices), is a novelty that can revolutionize the armaments industry.

With a 10% discount, it is available for as little as US$ 3,375 dollars (approximately R$ 17,723 reais) and delivery to the buyer is scheduled for six months from now.

If the ad is confirmed, this will be the first electromagnetic weapon to leave the scientific research stage and reach the consumer.

The Arcflash Labs GR-1 “Anvil” is an eight-stage semi-automatic high-voltage electromagnetic rifle. According to the manufacturer, it is the Gauss Cannon (also known as coilgun) most powerful ever sold to the public and probably the most powerful weapon of its kind ever built. It is also heavier: it has a total of 9 kilos.

With adjustable power, the manufacturer’s website states that the weapon is capable of firing up to 20 rounds per minute (at full power) or up to 100 rounds per minute at 50% power. The weapon accepts three different standard projectile lengths (32mm, 42mm and 52mm) and features a unique variable loader system.

What is an electromagnetic weapon?

An electromagnetic rifle has technology to propel a steel projectile using electromagnetic coils. While many people had been building weapons that propel bullets with magnetic force for more than a century—from small student projects to giant US Navy experimental cannons—but no one had produced anything beyond the research stage.

The coil shotgun created by Arcflash Labs has eight sets of electromagnetic coils in the barrel, which draw the steel projectile down from the centerline and accelerate it at high speed. Manufacturers say it has a barrel energy — the energy of a bullet when it is projected out of the gun — of about 85 joules, which is comparable to high-tech air rifles used for hunting.

What made the GR-1 possible, according to Arcflash co-founder David Wirth, were low-cost commercial semiconductor switches and the company’s patented inverter, which transfers energy from a battery to capacitors that can discharge quickly enough to fire a projectile. . The rate of fire is limited by how quickly the capacitors can be charged.

The mouth power is still comparatively low, due to capacitor limitations. “The only thing that keeps Gauss rifles from their potential is the energy storage of the capacitor,” Wirth explained to the British magazine New Scientist. But he says he believes his rifles will soon rival traditional firearms.

Although Arcflash has received initial development funding from the US Army, Wirth says he cannot discuss the company’s current military work. He sees secrecy and logistics as the GR-1’s main advantages: the ammunition is much simpler, requiring only one shell without any propellant or cartridge; and a standard lithium polymer battery can power a thousand shots — and it can be recharged in the field, using solar energy or other sources.

Use of electromagnetic rifle in the future

According to its developer, being able to vary the barrel speed could make the technology useful for non-lethal ammunition such as rubber bullets. “The scalable effects of a Gauss rifle would allow the police to fire rubber bullets at a speed proportional to the target’s distance, so it would be less likely to injure someone close and more likely to hit the intended target if it’s too far away,” said Wirth.

Robert Bunker, an analyst at security consulting firm C/O Futures, says the technology has significant secret advantages. “If the kinetic energy levels were to increase, the Gauss rifle would be ideal for use with a sniper,” Bunker told New Scientist. According to him, the traditional conical bullets can potentially be replaced by projectiles of the type, with greater penetration of the body armor and wound capacity.

According to Bunker, such devices have long been expected to replace traditional gunpowder weapons. “The question, however, is when,” he concluded.

In Brazil, the last few years have been marked by more flexible access to firearms. The year 2020 had a record of 180,000 new weapons registered with the Federal Police.

Since the 9th of this month, Brazilians are authorized to buy up to four firearms, as long as they meet a series of requirements, including being over 25 years old and not responding to a police inquiry or criminal prosecution.