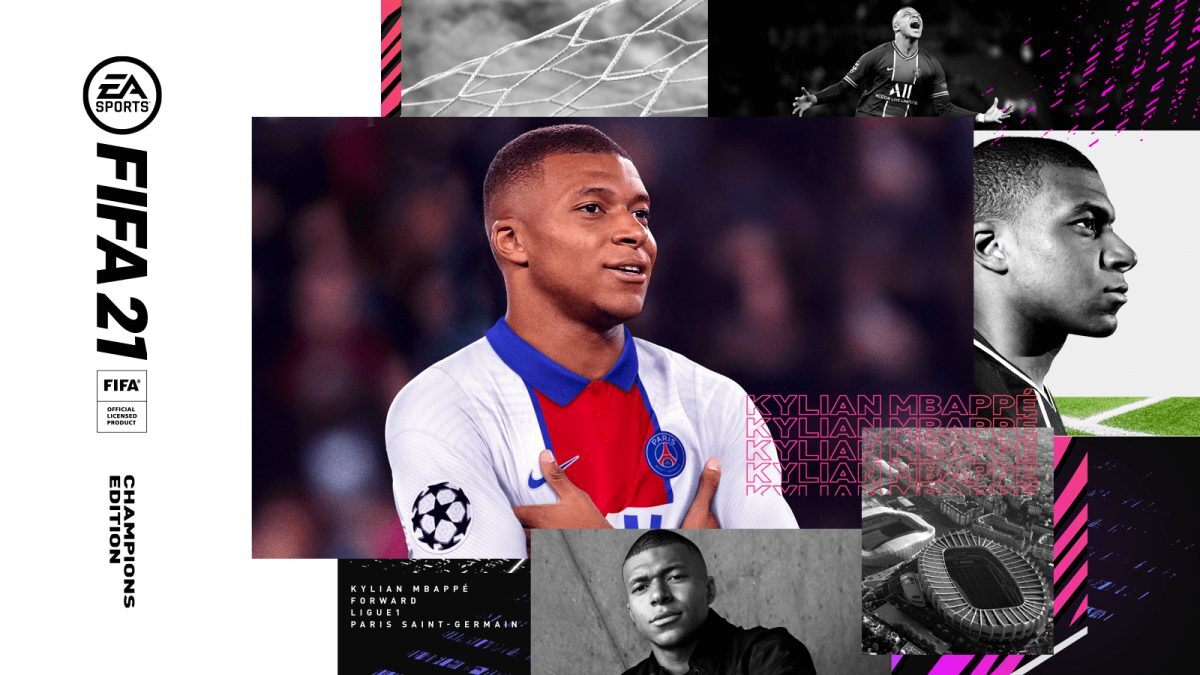 Every year is the same thing. EA does a great job of marketing and makes virtual ballers absolutely curious about a brand new edition of their football simulator. FIFA 21 has been with us for just over a month and proves two maxims of the wisdom of the football world: “there is no more fool in football” and “do not move in a team that is winning”.

When we talk about the new football simulator, both phrases are true. There is no more fool in this world of virtual football, players know that the changes from one edition to another of the franchise no longer have great leaps. In some cases, such as the Nintendo Switch version of the game, the “new FIFA” just updated the uniforms and teams, charging the same full price for the reheated one. However, it is quite understandable that the developer just wants to perfect a business model that is so profitable. Yes, we are talking about you, Ultimate Team. Now that we’ve got those two things out of the way, let’s go to FIFA 21.

To start with and at the risk of looking a little indifferent, the graphics are “ok”. Sometimes, the sweat on the faces of virtual athletes caused the opposite effect to the desired realism – leaving the boy Ney or Mbappé looking like wax dolls. We play FIFA 21 on a normal PlayStation 4 and, by the way, the look does not hinder the experience at all. 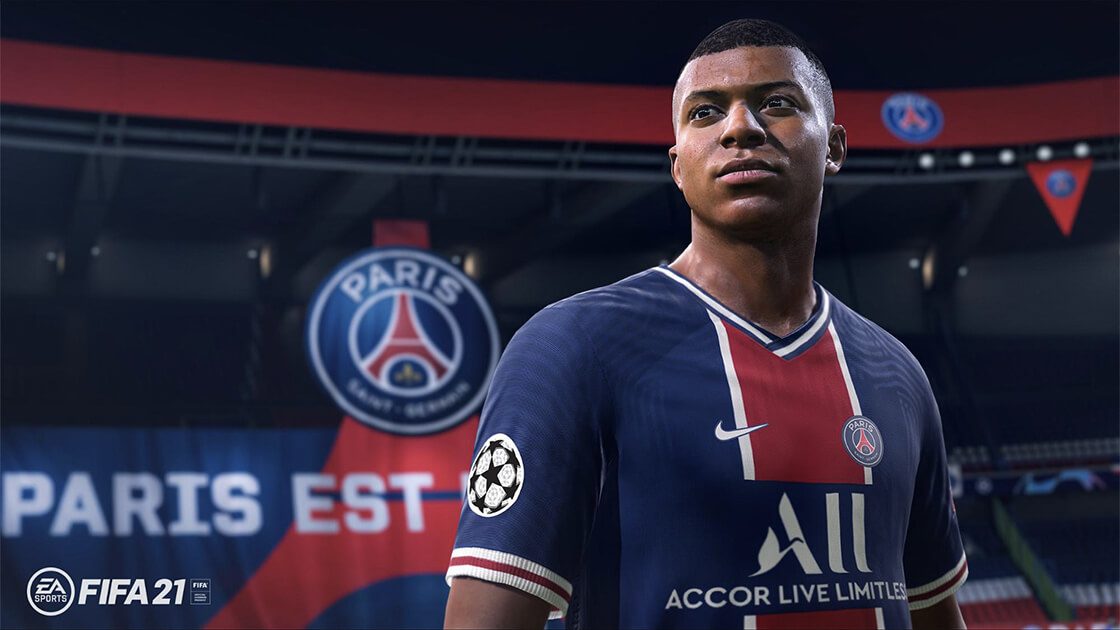 Let’s face it, FIFA 21 plays for the result and is efficient in this proposalSource: EA

It remains to be seen how this visual will benefit from the processing power of the new generation, but that is a topic for the second half of this analysis. For now, what matters is ball in the foot.

As for gameplay, FIFA 21 promises to reward players for their creativity both in attacking and defending. To deliver this type of performance realistically, the new edition of the game takes into account more information about the players when performing any action on the field.

For example: to measure the effectiveness of a FIFA 20 threaded ball, it would take into account the athlete’s short pass and throw. In the most recent version of the game, the same move takes into account a short pass / throw, vision and composure. In practice, this means that hasty passes – and interceptions – are more common in FIFA 21.

There’s more: the game has developed a new way to control the ball, called “agile driving”. Basically, the idea is to take advantage of the ability to dribble to create spaces. Just press R1 or RB to “swing” in front of the defender.

Closing the attacking duo, the game also features what it calls “creative races”. Basically, you can indicate where the players who are without the ball should move to, making the tables more efficient with the help of the L1 or LB button. The two novelties may seem complicated, but they are very intuitive – with few games you will be risking a few scribbles in the opponent’s defense.

On the defensive side, the main additions concern what the devs called a tactical personality. The EA team wants players to make the difference from being in the right place at the right time to kick, pass or block the ball. For those who enjoy this type of technology and are interested in the tactical aspects of the game, it is highly recommended to read the game development diary in this aspect.

Interestingly, FIFA 21 has a back in time feature, just like racing games. Yes, you can simply press two buttons and redo a move that ended with a kick out, for example. 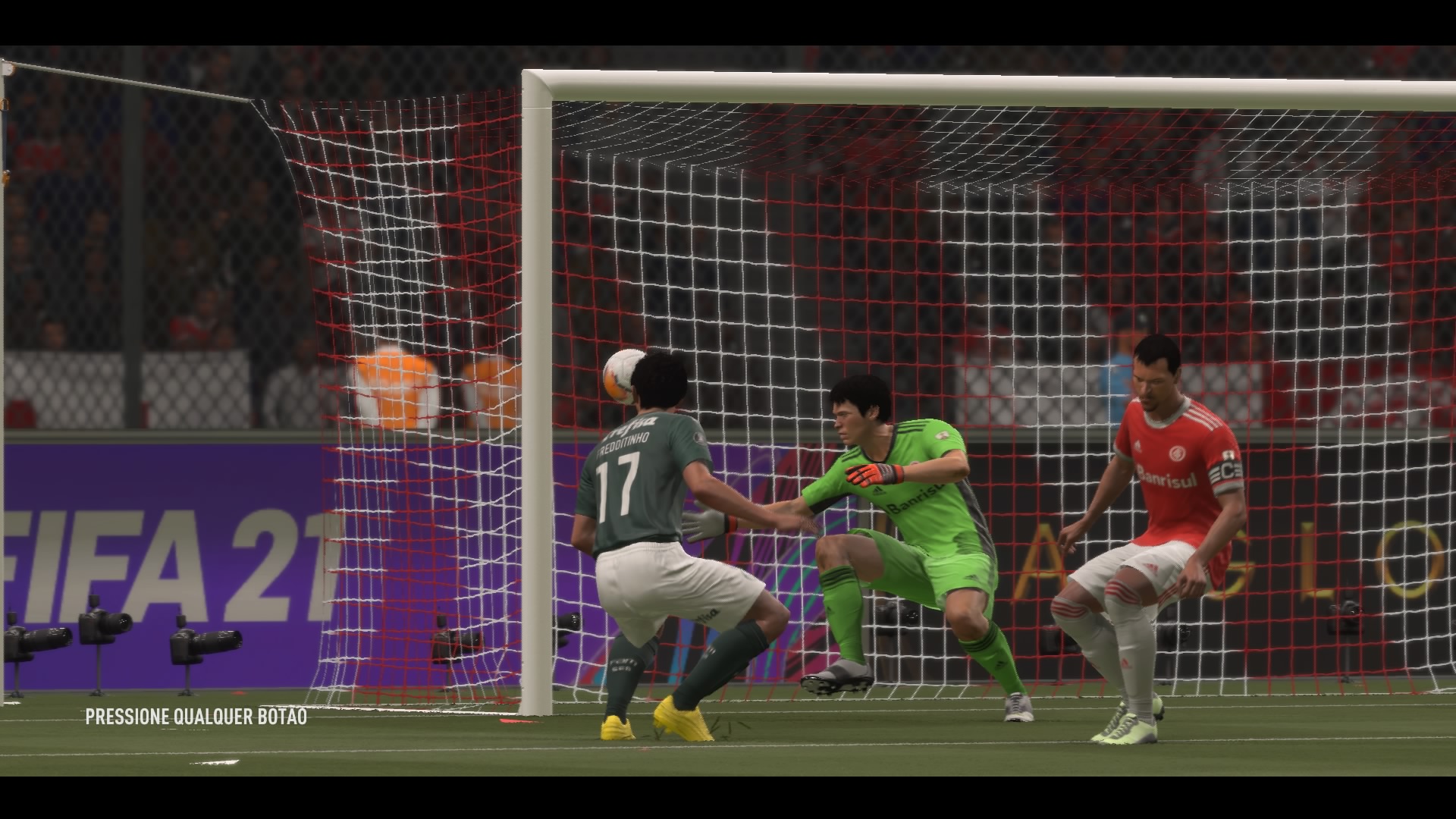 Did that ball get in? You can guarantee that by going back in time in FIFA 21Source: EA

Add to that the fact that the game has faster transition animations when the ball is stopped and we have more dynamic matches and the feeling of enjoying the games better.

New pofexô on the piece

We must confess that this version of the game was one of the most exciting in the announcement of the latest edition of the game. In taking on the challenge of being the coach of one of the greatest teams on the planet, this expectation was only partially satisfied. Even with all of the changes, the FIFA 21 career mode “hit” does not “beat champion”. 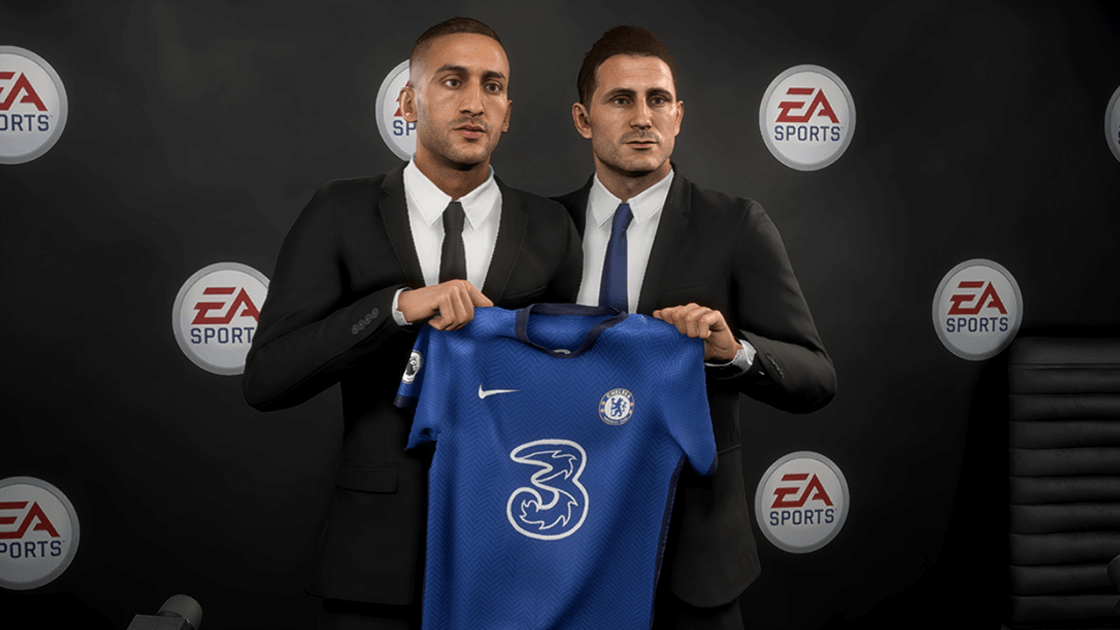 Complicated, but not perfect: career mode has finally gained some attention from devsSource: EA

In short, the new style of play has two differentials: 1) being able to enter and leave matches when a game is resolved or when your talent with control in your hands is necessary makes everything easier and 2) the news add some layers complexity in the game, without making FIFA 21 a “Manager” style game. In order to keep the puns with the boleiro language, the career mode is like a “false 9”: make your goals and pull the mark, but it is not that striker who lives by goals. If you know what I mean.

The negative side is that, over time, this amount of activities (training, collective, negotiation with the cast, collection from the board) begins to weigh a little. To the point that you just want to get through it quickly and go to the matches. Now, the star of this company is definitely the Ultimate Team mode.

You can say without fear of making a mistake that FIFA Ultimate Team is that shirt 10 that decides the game in favor of EA. Despite the success, the game mode has had few changes in FIFA 21. Among them, more options for personalizing teams and stadiums – now you can choose even the crowd’s shout.

In addition, FUT also allows you to play the mode collaboratively with your friends. Not that this is really an overwhelming novelty. After all, everyone knows that what really fascinates the game mode is the mechanics of opening a package and taking off that great player. And yes, taking this practice to the extreme, it is also the main defect of the format. But, it seems, EA will not change its most profitable format anytime soon. 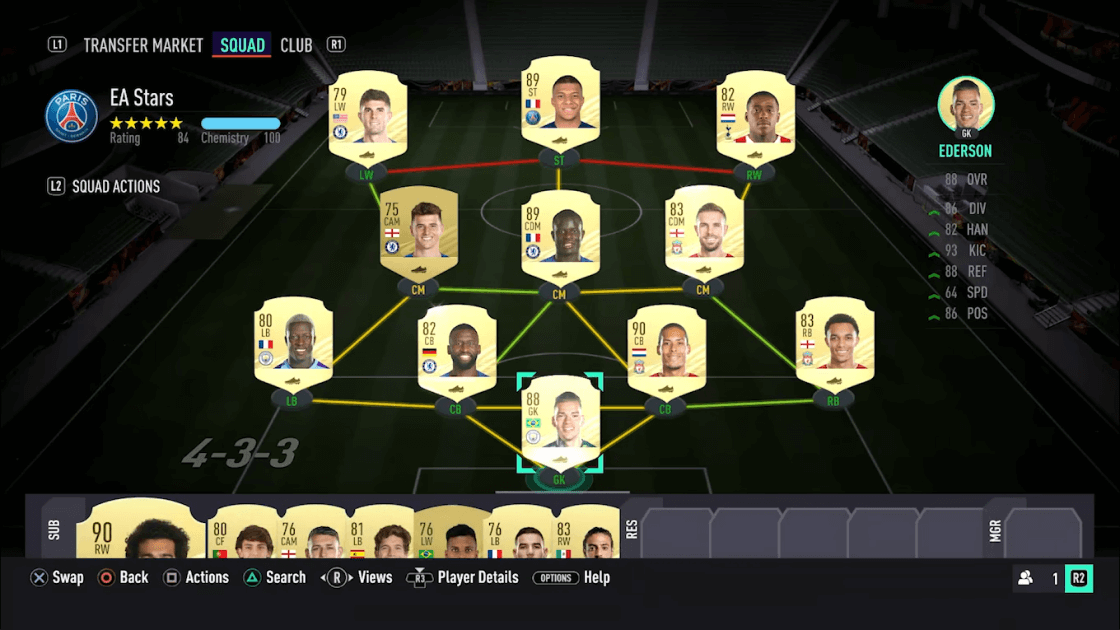 FUT Mode follows as shirt 10 of the franchiseSource: EA

And what about the new (old) Volta mode? Well, there’s not much to say about the mode. This time, the version that refers to the late FIFA Street has a brief history with special participation from Kaká and other established players of world football.

The mode does not add anything very different or innovative, but it serves as a way for you to test some of the new gameplay features with more room to try some dribbling and even synchronized racing. It is very likely that you play a few hours and never return to Volta, sorry for the pun. 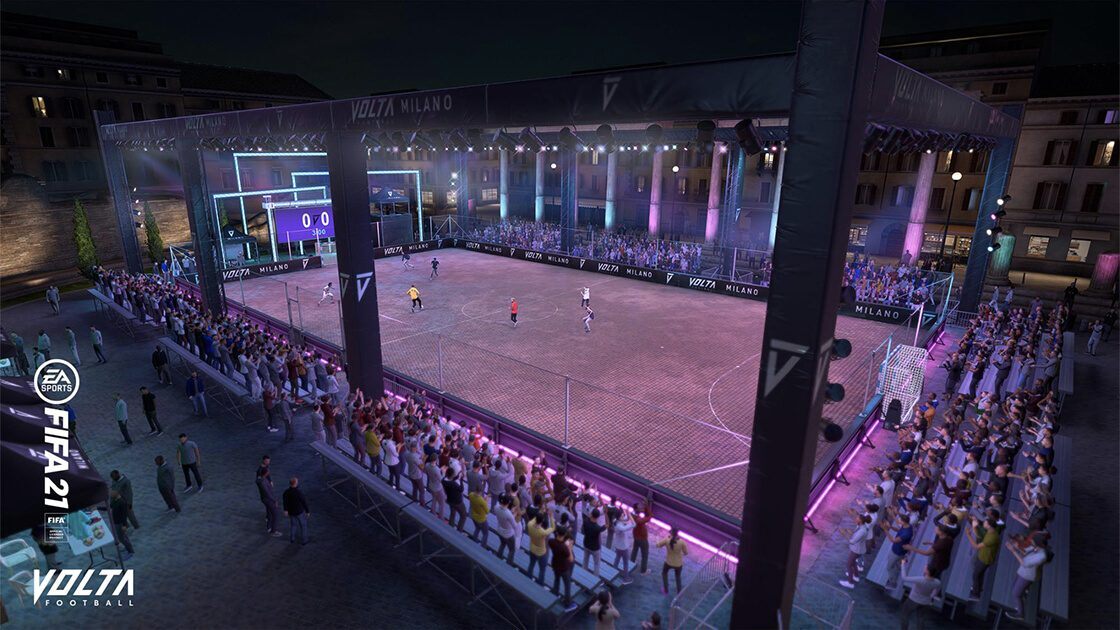 Lap is just a great excuse to try some dribbling before online matchesSource: EA

Licensed player. And this is not a “privilege” only for the club that is one of the biggest champions in Brazil. FIFA 21 has the shields of popular teams in the country, such as Flamengo, Internacional, Grêmio, Santos, Athletico Paranaense, Ceará and several others, but the brand did not get the image rights of these players. So, the way was to set up a team of fictional athletes.

You will have to celebrate the goals of Fredditinho (Palmeiras) or Mestrança (Atlético Goianiense) when playing the game, for example. It is a real pity, since the simulator has done a great job in the licensing department in recent years. Especially, when we talk about the graphic package used in broadcasting championships such as the Champions League, Libertadores and Premier League. The generic lineups of Brazilian teams end up being a true anticlimax. 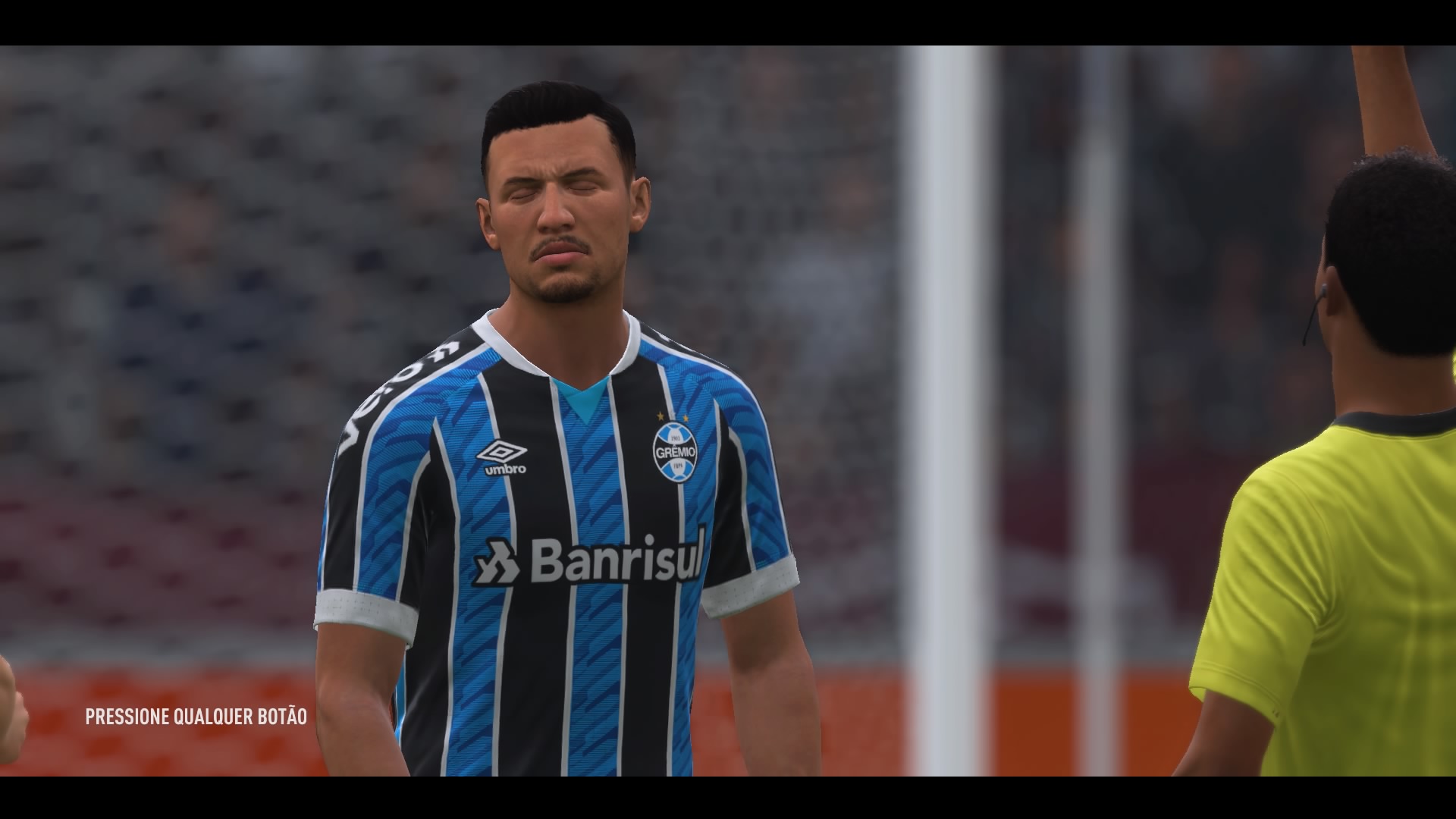 In addition to the look of the official matches, EA was very successful in hiring Gustavo Villani as the game’s narrator. With all due respect to the work done by Tiago Leifert, but it makes all the difference to have a professional on paper. The truth is that the global presenter was always a little out of place, like the left side that was improvised on the right side of the field.

Gustavo Villani is now officially the FIFA narrator in Brazil joining Tiago Leifert and will already be on FIFA 21. pic.twitter.com/c1V7gjrbQS

Now the broadcasts even have the comments of a kind of field reporter, which increases the feeling that the game is for real. The comments follow with the ex-player Caio Ribeiro and, if they are not the most relevant, fulfill their role.

Unlike Konami, which decided to launch eFootball PES 2021 as a kind of “mixed team” for the field during this console generation switch, EA came in to confirm its favoritism. The brand launched a brand new FIFA and still got the strategy right. That is, it has decided that FIFA 21 buyers on PlayStation 4 and Xbox One will be entitled to copies of the game on their respective PlayStation 5 and Xbox Series X / S.

To excite the fifteen who broke the pig to pay for the brand new Sony and Microsoft consoles, the official profile of the game shared images that were beyond attractive. However, we will only have access to the graphics and the complete simulator experience in the new generation from December 4th.

Well friends, is FIFA 21 worth it?

During its launch, the game receives a series of criticisms regarding the artificial intelligence of goalkeepers. Part of the comments from the “peanut gang” on social networks concerned what we can call the lack of intelligence of the defenders in the game. Recently, EA released another patch to correct some of the game’s flaws and it is expected that the novelty will make the best goalkeepers in the world behave more like, well, the best goalkeepers in the world. During testing, we noticed some improvements, but there is still a long way to go.

Still, it is undeniable that FIFA 21 maintains the consistent gameplay of the last editions. With the improvements in career mode, the simulator becomes more attractive for those who enjoy the idea of ​​playing football manager – and the possibility to simulate or play the games whenever they want guarantees an absurd quality of life for players. 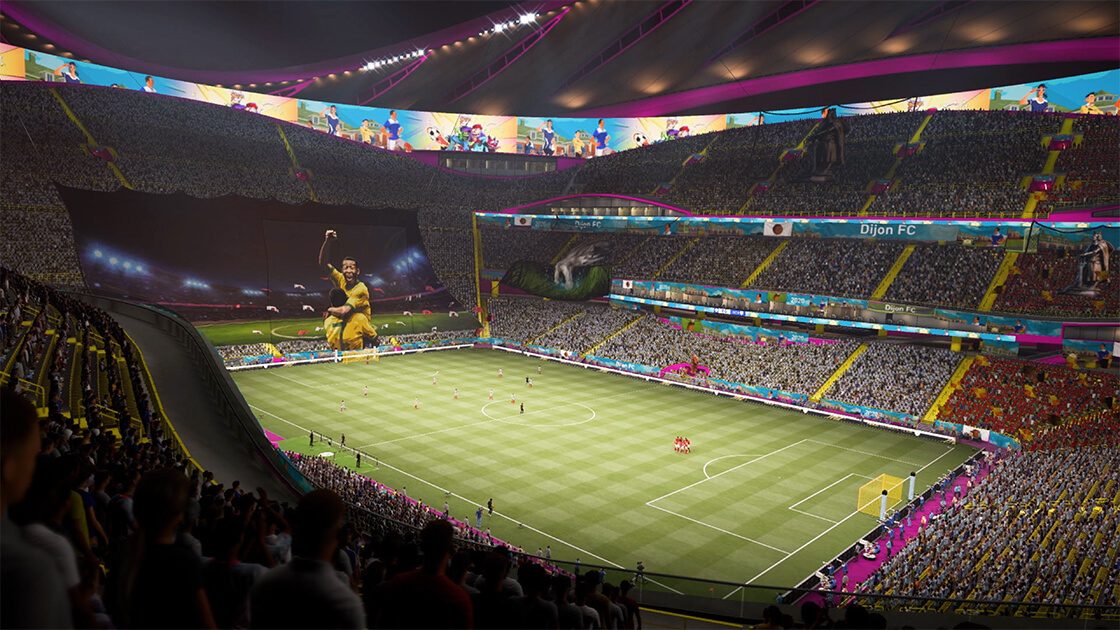 Atmosphere is certainly one of the goals of FIFA 21Source: EA

There’s more: FIFA 21 offers all levels of challenge for those who enjoy virtual football and delivers a fun experience. In small moments, like when you get an accurate table or even intercept a pass, there is the feeling of a small victory. Now, if you really want to have a great acclaim, the competitive (and very appealing) mode is there to put your skill to the test. A warning: it will be very complicated to stay undefeated.

It is always difficult to comment on whether this or that title is worth it, especially when we take into account the franchise’s annual launch format and the extra expenses for those who want to advance the development in Ultimate Team mode. That said, by investing only in the most basic version, we can guarantee that there is enough for several hours of fun. And the promise that you can guarantee the version for your next Xbox or PlayStation, which doesn’t sound like a bad deal.

After all, when the referee whistles, what everyone wants to know is a ball in the net. In this sense, the series continues to guarantee a game that does not disappoint and a lot of options for different levels of virtual balls.

“After all, when the referee whistles, what everyone wants to know is a ball in the net”