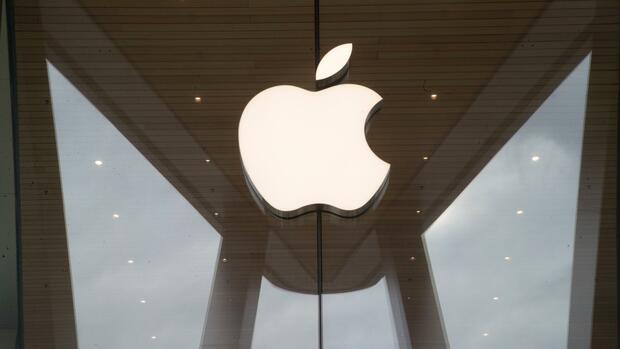 Dusseldorf First the debt crisis, then the trade conflict and now Corona: Europe’s companies are losing out of every crisis. In terms of profits and profitability, the US corporations continue to expand their lead.

Because the global economy grew weakly before Corona and the trade conflict put a strain on production, interrupted supply chains and reduced earnings, companies in Europe made much less money. In the past fiscal year, the 500 largest European listed groups, according to calculations by the Handelsblatt, brought in eight percent less net profit than in the previous year at 505 billion euros.

In the first quarter of the current year, Europe’s profits eroded almost completely: compared to the previous year, they fell by 87 percent to just eleven billion euros – distributed among almost 300 of the 500 largest companies that reported on the first three months. Almost as much profit, exactly $ 11.25 billion or the equivalent of around ten billion euros, was made by Apple in the past quarter alone.

America presents itself much better. The 500 largest US corporations generated a net profit of the equivalent of 750 billion euros in the past financial year. That is more than ever and almost four percent more than in the previous year.

As was already the case after the sovereign debt crisis as a result of the real estate crisis, American companies are again the winners of a domestic crisis: the trade conflict instigated by President Donald Trump. The focus on traditional industries in Europe and IT in the USA is primarily responsible for the ever-increasing drifting apart of the two continents. And that should intensify further in the corona crisis.

Europe has a particularly large number of companies in manufacturing, traditional industry. Here, the companies cut back their production particularly strongly in the corona crisis. The long-earning car makers Daimler and Volkswagen recorded a drop in profits of more than 80 percent in the first quarter. In Italy, Fiat-Chrysler fell deep into the red with a loss of 1.7 billion euros.

For the year as a whole, European companies are expected to earn almost a third less than in the previous year – in the USA the estimates are minus 18.5 percent. And even that should still be too optimistic with regard to Europe, because the profit forecasts continue to fall every day. In the past quarter alone, specialist analysts lowered their estimates for Daimler by 77 percent, the aircraft manufacturer Airbus by 63 percent, the luxury giant LVMH by 34 percent and the oil company Total by 73 percent.

Breweries and oil under pressure

The downturn runs through almost all industries. Exceptions with stable profit forecasts are pharmaceutical and health groups such as Bayer and Fresenius, Deutsche Telekom and their French competitor Orange, the Dutch retail giant Ahold and Deutsche Börse, which is benefiting from the rapidly increasing trading turnover on the financial markets.

Companies under pressure from radical changes in consumer behavior in the face of closed pubs, restaurants and breweries are under the greatest pressure. The world’s largest beer producer Anheuser Busch Inbev posted a quarterly loss of two billion euros.

Deutsche Lufthansa recorded a loss of two billion euros. Because it will probably take a long time, perhaps years, until the number of flights and passengers reaches pre-crisis levels again, Europe’s largest airline wants to cut 22,500 jobs, 10,000 of them in Germany. The airlines in neighboring countries are not doing any better. 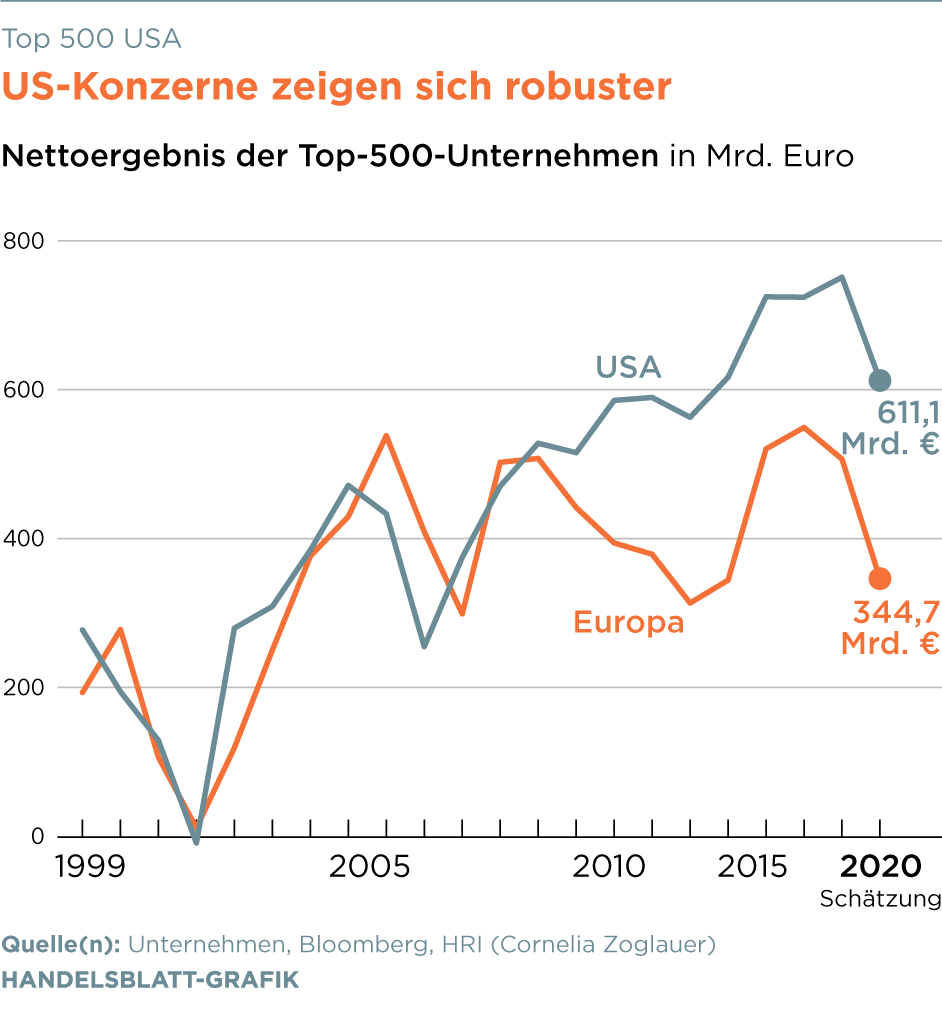 Things will get worse in the second quarter. Exports of Europe’s largest economy plummeted by almost a third in April compared to the same month in the previous year. Germany’s export is one of the most important pillars of the economy in normal times. In the current crisis, however, the export business is the “Achilles heel of the German economy”, commented Stefan Kooths, economic director at the Kiel Institute for the World Economy (IfW). The economic consequences of the corona pandemic would have “massively slowed down” global investment activity. German industry, as a major supplier to the global economy, is experiencing this particularly hard.

The mood among German companies improved significantly in June, as the Munich research institute Ifo announced on Wednesday. “The German economy sees light at the end of the tunnel,” said Ifo President Clemens Fuest. But economists remain cautious, especially since the vast majority of companies continue to classify their current situation as bad.

The Bundesbank’s economists assume that the corona crisis will hit the German economy particularly hard in the second quarter. “Overall, economic output could decline by an average of almost a tenth in the current quarter, and thus significantly more than in the first quarter,” says the monthly report for June.

Europe is rich in traditional and cyclically sensitive companies, which are slumping above average in every downturn. These include the oil giants in the front line. The price of crude oil was already under pressure during the trade conflict, and falling industrial demand as a result of the economic downturn caused by the corona pandemic caused the price to plummet. The fact that the oil-producing countries temporarily expanded their offer to gain market share accelerated the decline.

The consequences are dramatic: Royal Dutch Shell, BP, Rosneft and Eni were in the red this year after billions in profits in the previous year’s quarter. In view of the losses – “I’m talking about several million a day,” CEO Bernard Looney predicted from his employees – plans to cut 10,000 jobs by the end of the year. That is every seventh digit.

The consequences are more unemployed, higher government spending and less consumption. This results in lower profits, less research and future investments by companies. In view of the drop in earnings, BP wants to limit capital expenditure to just under eleven billion euros – 25 percent less than originally planned for 2020.

The corona pandemic and the trade conflict, along with the weakening global economy, are also weighing on American industrial and oil companies. This can be seen in the massive drop in earnings from companies such as Caterpillar, General Electric, Chevron and Exxon. But these traditional corporations and industries are playing an ever smaller role in the largest economy. The many IT companies dominate here. They increased their profits by an average of ten percent in the first quarter.

IT is now the largest industry on Wall Street by number of companies, aggregate net income and stock market value. Corporate America is playing this advantage better and better. Due to their business model, technology companies are less dependent on physical supply chains and goods traffic across national borders than companies in other industries. That helped in the trade conflict.

In the corona crisis, technology companies often even benefit from the standstill of the physical economy. Microsoft, for example, proves this with its software and services for outsourcing storage capacities (cloud) or Amazon with its worldwide online trading. In the face of many closed shops, customers ordered even more on the Internet during the crisis. Amazon is currently looking for 175,000 new employees.

America’s companies earn more and are more profitable. With their strong brands and monopoly-like structures, many are able to generate consistently high profits without competitors contesting them through competition or even price dumping. Overall, the Americans are more than 20 percent more profitable than the Europeans: with every dollar in sales in the past financial year, the 500 largest US corporations had an average net profit of 6.9 cents. For the 500 largest Europeans, it was 5.7 cents.

Microsoft, Alphabet, Apple, Facebook and many other IT giants have achieved net return on sales of more than 20 percent for years without competitors contesting them, as is common in industry, consumption and retail.

The “shutdown”, ie the shutdown of the economy and social life in Asia, Europe and America, has so far had no impact on the IT corporation’s balance sheet. Apple posted a net profit of just over $ 11 billion in the first quarter of the 2020 calendar year – despite the fact that the stores were closed in February – as in the previous year. Customers ordered online, physical sales only play a subordinate role.

Alphabet, the Google search engine holding company, grossed $ 6.8 billion, compared to $ 6.7 billion a year earlier. Facebook increased its profit by 19 percent to $ 6.1 billion, Microsoft increased it by two to $ 10.8 billion.

Investors have been on the trend for a long time

But not only the many technology groups, the US economy as a whole is better equipped than Europe to face international turbulence with closed borders, entry bans, disrupted supply chains and delayed logistics. The reason is lower globalization. According to World Bank calculations, exports correspond to an average of around 30 percent of a country’s gross domestic product. In Germany it is 47 percent, in the United States only twelve percent.

Broken down for companies, the foreign share of the 100 largest German listed companies according to Handelsblatt calculations is over 75 percent. America’s companies make up just over 50 percent.

Weak Europe, strong America – shareholders have long been following this trend. Over three, five and ten years, stock prices on Wall Street performed better than in Europe. The S&P with the 500 largest US corporations has increased by 50 percent in the past five years, and by 180 percent over the ten-year period. The Euro Stoxx 600 with the large and medium-sized European companies managed only minus six percent within five years and 43 percent in ten years. 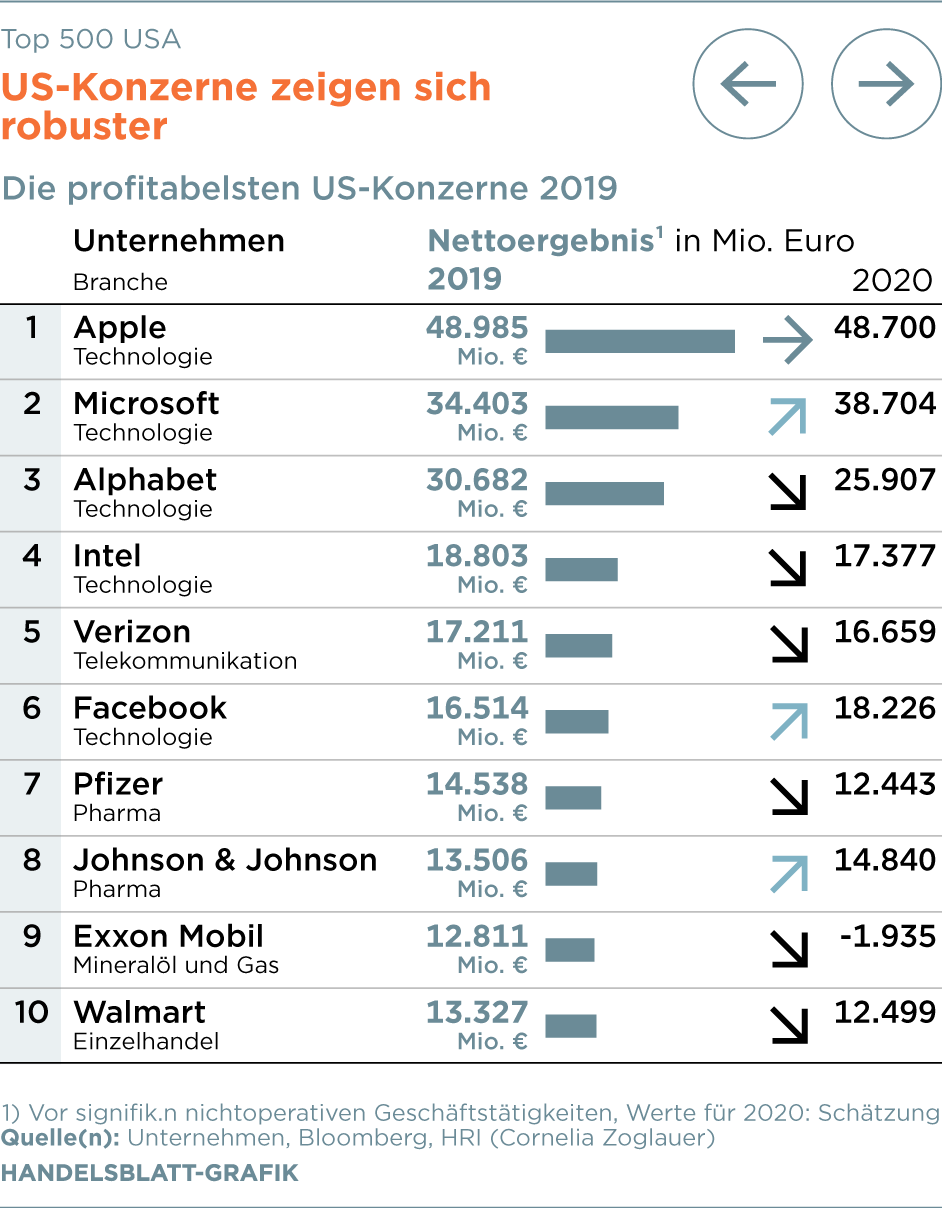 “The investors trust the technology and digital corporations to shape the economy even more in the future, create functioning digital ecosystems and set up rules that other industries have to follow,” says Germany boss Hubert Barth from the auditing company EY. Europe’s leading industry, on the other hand, is still the manufacturing industry. However, it promises little growth potential for many investors.

What was initially mere speculation when corporations like Facebook and Amazon increased their sales, but also increased losses, has long since been proven by the real data. Established technology giants like Microsoft and Intel have tripled their profits since the pre-crisis and boom year of 2007, while Google’s holding company Alphabet increased fivefold. Ever since, verticals like Amazon have increased it fifteen times, and the world’s most valuable company Apple has even increased it fifteen times. Europe does not have such success stories to offer.

America’s lead is by no means natural. With 537 billion euros, Europe’s 500 largest companies in 2007, shortly before the outbreak of the banking crisis, left their US competitors behind by more than 100 billion euros. Three years later, the Europeans came to a total of 501 billion euros – almost ten percent more than their American competitors managed.

For the time being, the last capital is the corona crisis

But in the sovereign debt crisis as a result of the financial crisis, the situation reversed sustainably. Higher taxes for consumers and businesses to consolidate national budgets in over-indebted countries like Spain, Greece and Ireland, less investment, record high unemployment in the southern countries due to the long economic crisis and consequently less consumption – all of which reduced corporate profits.

Meanwhile, the US economy quickly got back on track after the banking crisis had been overcome, before US President Donald Trump fired the boom with a billion-dollar corporate tax reform and further boosted the economy and corporate profits. His subsequent trade conflict with China and Europe burdened the exporting German companies in particular with their extensive supply chains.

For the time being, the last chapter in the development of the two continents apart is the corona crisis. Despite higher infection and death rates in the United States than in any other country in the world, IT and digital companies are now playing to their full strength: by supplying the world with software and goods online, which the manufacturing, traditional economy can only do to a limited extent .

More: Fewer top patents: Germany and Europe are falling behind.