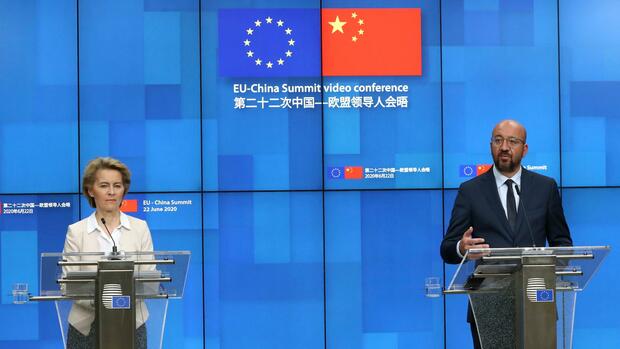 Beijing, Brussels, Berlin At the last EU-China summit there was a joint press conference and a detailed final statement. Not so this Monday: Commission President Ursula von der Leyen and Council President Charles Michel went public without their Chinese counterparts, and the joint statement was also canceled.

The reason: Beijing didn’t want to. This fact already says something about the state of relations between the two sides. After the recent summit in spring 2019, Europeans had been cautiously optimistic that they could wring out concessions from China’s leadership around President Xi Jinping and Prime Minister Li Keqiang.

After all, Beijing had given written assurances that it wanted to conclude an ambitious investment agreement by the end of 2020, thereby improving the conditions for investors. After that, not much happened again. “Many of the commitments have not been implemented sufficiently,” criticized a high-ranking EU official.

At least some hoped that the video summit in Brussels should bring new impetus: the trade talks, Beijing’s commitment to climate protection and also China’s action in Hong Kong addressed Leyen and Michel. However, they do not seem to have found too much hearing in their conversations with Xi and Li.

“We have to make progress,” von von Leyen subsequently emphasized. But the summit could only have been the start. Beijing had to show more ambition, especially with the investment agreement, to complete the talks by the end of the year.

Relationship between the EU and China has deteriorated

The summit should have taken place at the end of March, but was postponed due to the virus outbreak. According to the original dramaturgy, the meeting should have kicked off a pioneering year in bilateral relations, crowned by a historic meeting of all 27 EU leaders with the Chinese leadership.

The summit in Chancellor Angela Merkel in Leipzig in mid-September was recently postponed, a new date has not yet been fixed. According to Handelsblatt information, Merkel’s China trip planned for July will not take place either.

The participants in the summit were justified with corona-related restrictions, as was the slow progress in negotiations in the run-up to today’s video conference. But that’s only half the truth: the relationship between the EU and China has deteriorated further in recent months.

Attempts by Chinese government officials to reinterpret the origin of the Sars CoV-2 virus have upset Europeans as much as Beijing’s propaganda on the Internet.

The planned security law for Hong Kong unanimously condemned the EU member states as encroaching on the extensive autonomy. Beijing claims to use the law to restore law and order in its special administrative zone. The Europeans see this as a violation of the principle “one country, two systems”. EU Council President Charles Michel said Chinese action in Hong Kong is “serious concern” for the EU.

The European Parliament also called on Friday to consider bringing the case to the International Court of Justice. “The EU must not duck away if it claims to play a geopolitical role,” said Reinhard Bütikofer, President of the Chinese delegation to Parliament.

Political tensions are also weighing on talks about closer economic cooperation. Europeans are calling for the Chinese market to be largely opened up, for example, to European car manufacturers, financial service providers and biotech companies. They also insist that the local authorities no longer place foreign companies at a disadvantage compared to their own (state) companies and that China meets high standards for the protection of the environment and workers.

Only if Beijing fulfills these demands will the EU member states agree to an agreement: “A bad deal is not an option,” said German EU ambassador Michael Clauss of the “South China Morning Post”.

Norbert Röttgen, Chairman of the Foreign Affairs Committee in the Bundestag, emphasizes: “An investment agreement only makes sense for the EU if there is better access for European companies to the Chinese market.” The relationship with China could only be achieved by “constructive strength” shape.

So far, Xi is not ready for the required reforms. Vice Premier Liu He said last week in a letter to Commission Vice President Valdis Dombrovskis that EU negotiations say that a “breakthrough” in the negotiations is possible before the summer break.

So far, however, Europeans have not been able to recognize that the leadership is ready to respond to their demands: “Terms such as reciprocity and fair competition are obviously difficult to translate into Chinese,” says a high-ranking EU diplomat.

The EU side argues that its own market is much more open to Chinese investors than vice versa. It is therefore up to Beijing to approach the Europeans.

In order to increase the pressure, the EU is putting its own torture instruments on the table: the Commission would like to add further tools to the existing instruments, such as anti-dumping duties and investment controls, which are directed against China’s lavish subsidies for its own industry. “If we cannot agree on common rules, we will have to act unilaterally,” warns the EU official.

Europeans are also dissatisfied with China when it comes to climate protection. Von der Leyen and Michel wanted to urge their counterparts to invest in the modernization of the economy after the pandemic and to improve their commitments from the Paris climate protection agreement.

Although Beijing supports renewable energies and alternative vehicle drives with large sums, local governments are increasingly investing in coal power that is harmful to the climate. There had already been more permits for coal-fired power plants in 2019.

According to media reports, the Chinese government approved almost ten gigawatts of new coal-fired power plants in the first quarter of 2020 alone – roughly equivalent to what had been approved for the entire last year. Bütikofer therefore warns: “China is moving in a different direction than we are.”

More: The German government must come out of cover and ensure a common strategy in Europe towards the Middle Kingdom, says Handelsblatt author Torsten Riecke.