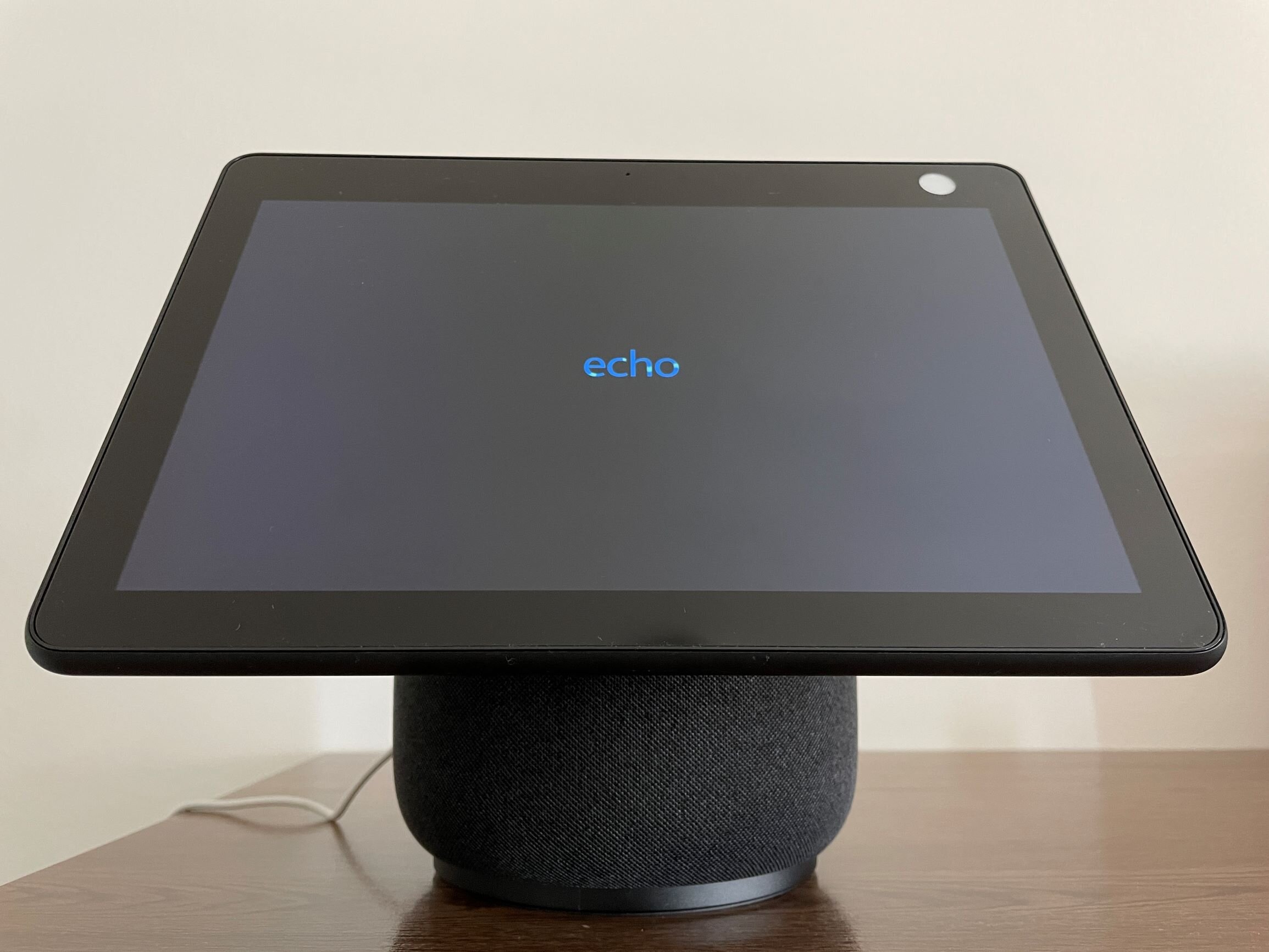 Announced in September last year, the Echo Show 10 is a device from Amazon that brings the good old Alexa that we already know with a different housing that rotates the screen almost 360 degrees. In March 2021, it started to be sold in Brazil for R $ 1,899.

As usual in an Echo device, it is possible to turn on and off smart lamps, see the image of the intercom, and much more, using only the voice. Echo Show 10 can also connect with Spotify, Apple Music, Deezer, Amazon Music, Amazon Prime Video and Netflix to listen and watch content right on the device’s screen.

No YouTube here, but you can do a “trick” and access the platform’s videos through the browsers that already come on Echo Show 10, Amazon Silk and Firefox. 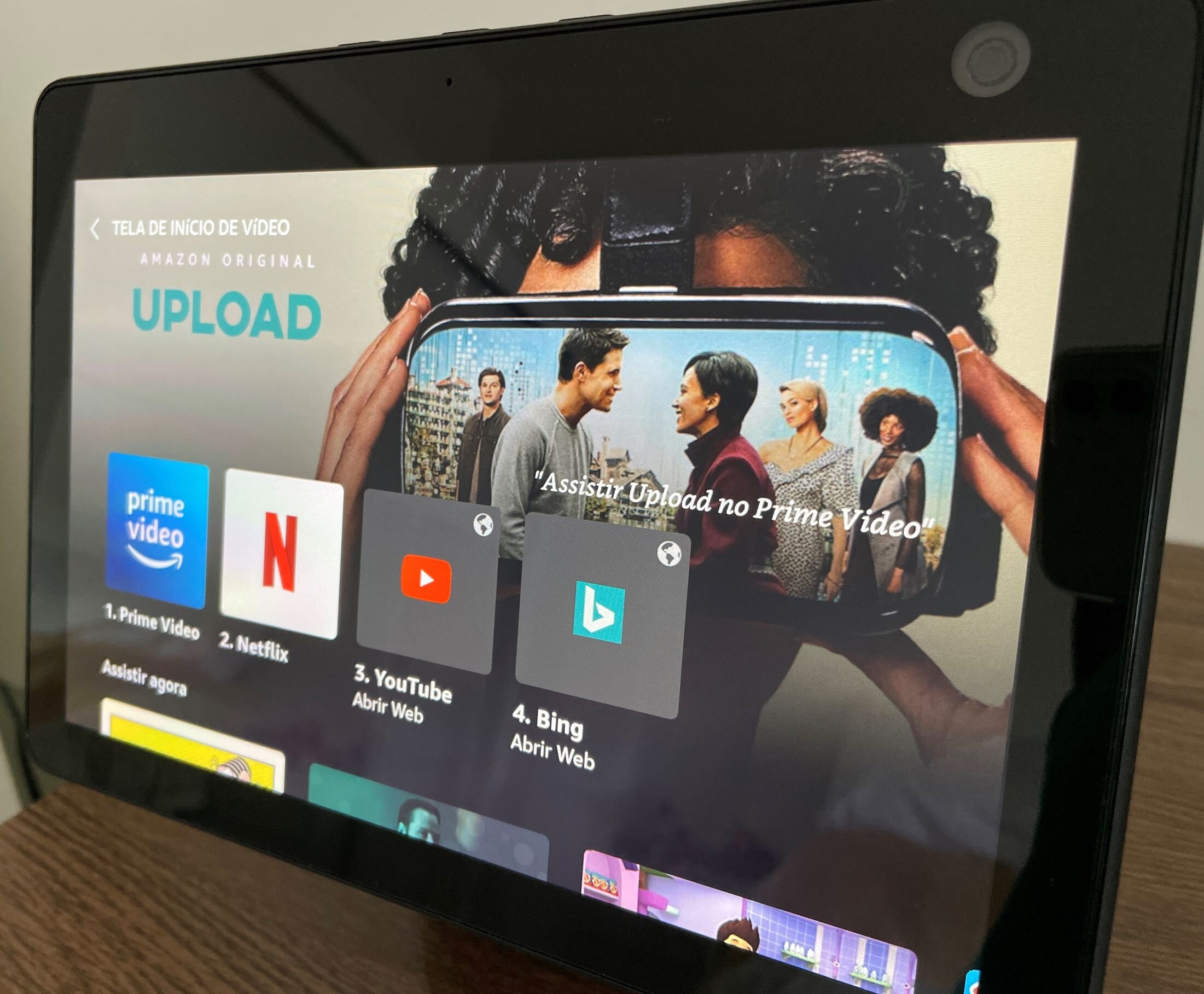 The Echo Show 10 has a 10 inch HD screen with an integrated 13 MP wide-angle camera that has a physical cover. The quality of the screen has improved compared to the first and second generation Echo Show. The image is lighter and can adapt the brightness and color according to the ambient lighting.

At first, the screen spinning on its own was more frightening than cool. But after a while, it got nicer than scary. Despite not having any wheels to go after me walking around the house, this Echo Show has a very quiet motor that is responsible for making the display spin when making automatic tracking to follow me from side to side around the room. 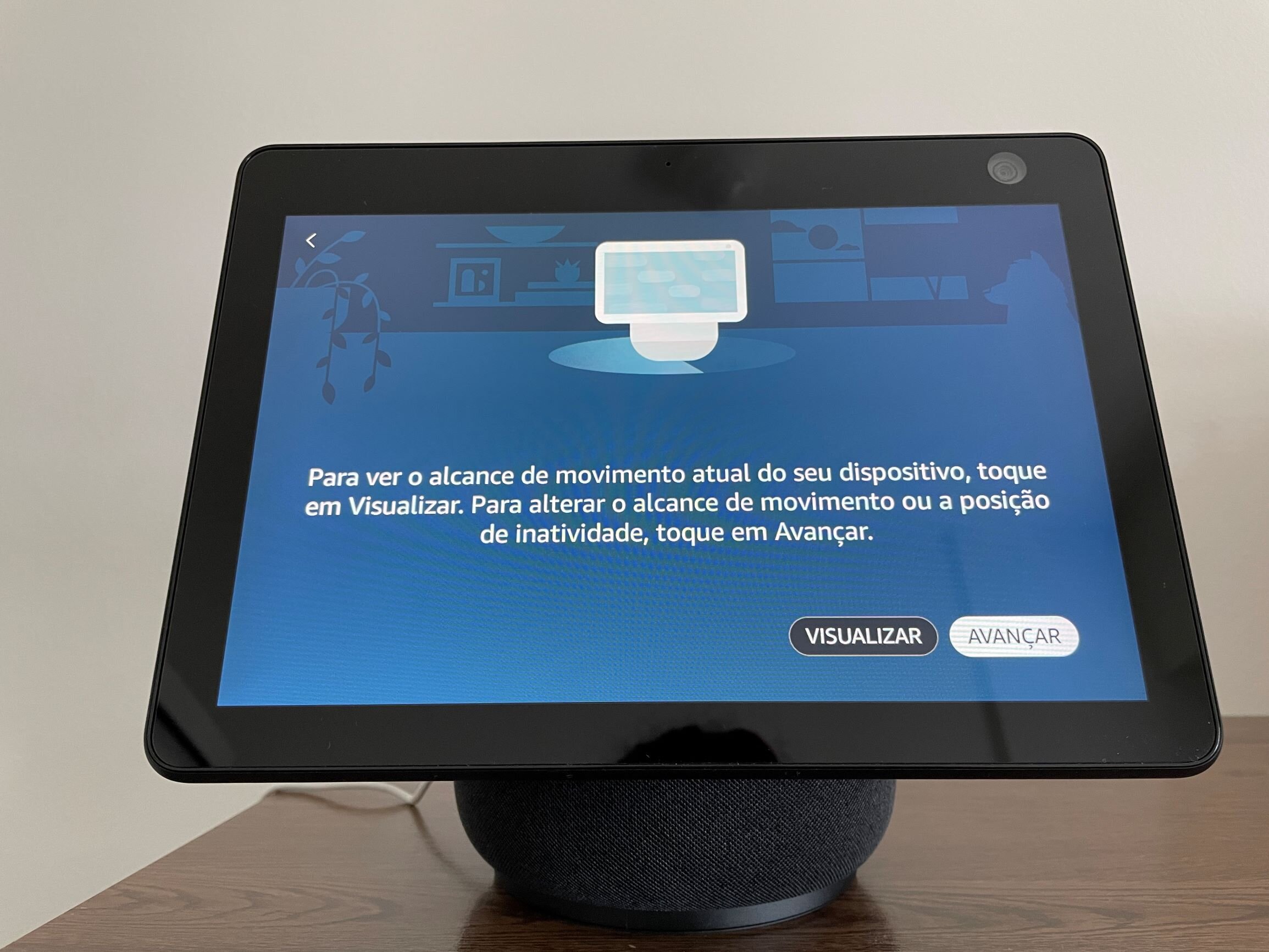 It is worth mentioning that, if the place is very dark, it displays a message saying that the movement is unavailable because the lighting is low. It also has no movement if the camera is locked.

Echo Show 10 can also be manually rotated left or right, and the screen can be manually tilted up or down, but this vertical feature is not motorized.

The design, however, is not the most beautiful thing you will have at home, even reminiscent of the 2002 iMac G4. Another visual detail that can be a little annoying is that, even in the black version of the device – which is the only one available in Brazil – the cable is white. 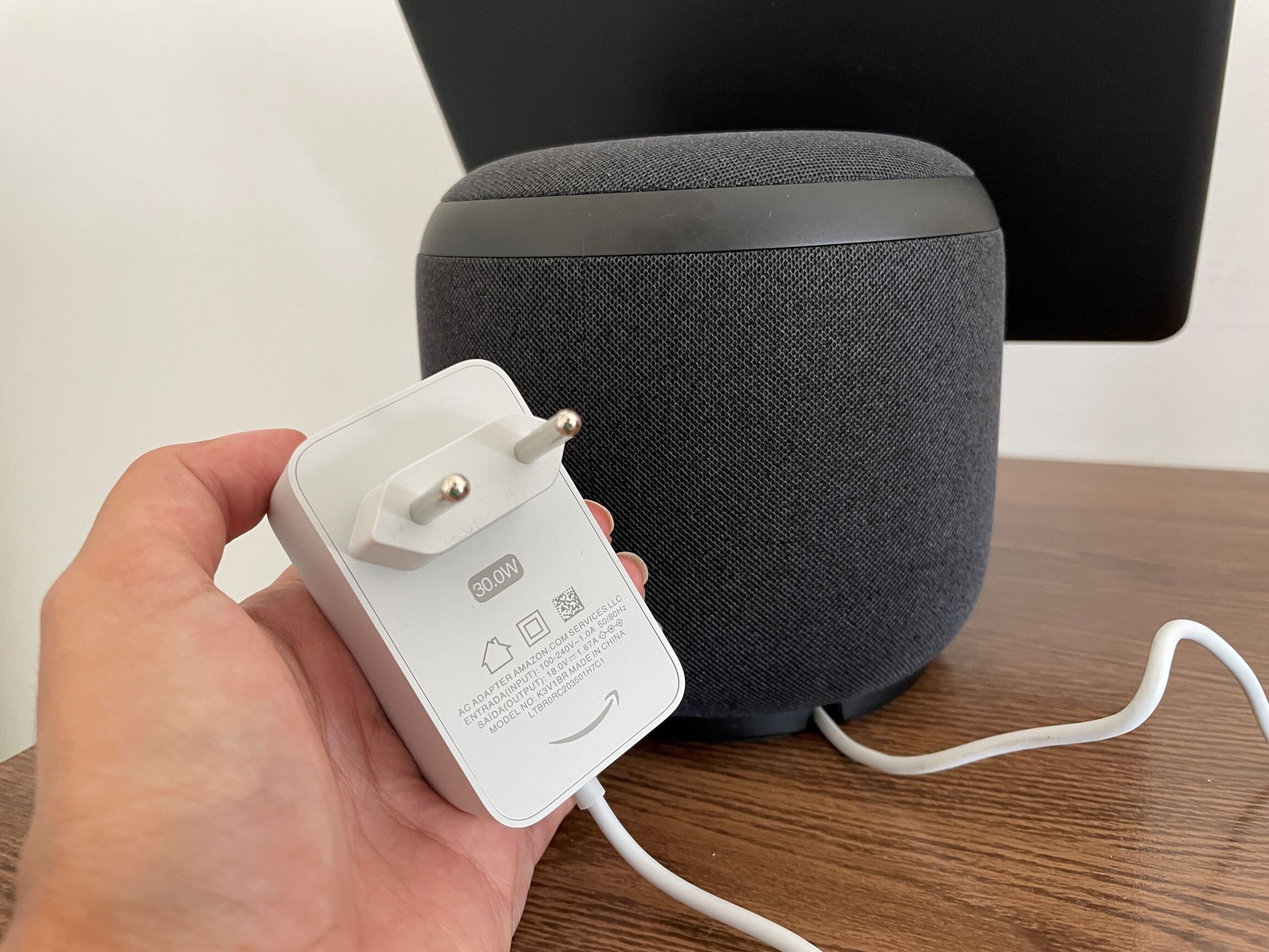 The Echo Show weighs 2.56 kilos, that is, it is not a loudspeaker that you can easily carry around between rooms. The 25 cm width and the need to have free space around it to rotate around the base also reduce the options of places to place the device at home a little. Amazon even sends a piece of paper so you know how much space you need to leave around the device so that it can rotate freely.

The device also has physical buttons for volume control, microphone mute and manual shutter shutter. Speaking of volume, the sound here is also very good and, despite not reaching the level of Echo Studio (without a screen), Echo Show 10 does a good job with its two front-facing 5-watt tweeters and its audio woofer. 25 watts. 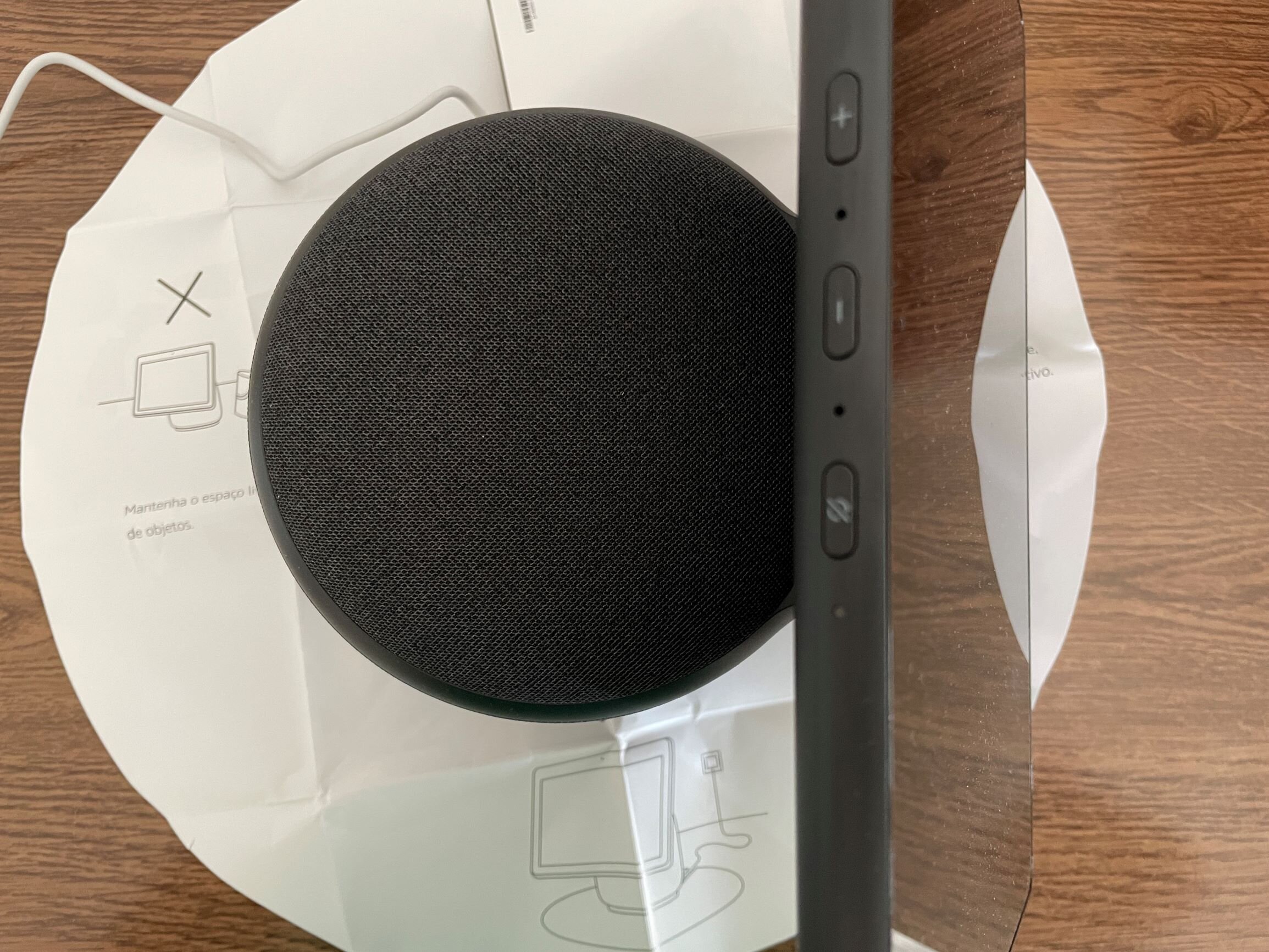 Space required for the Echo Show 10 to rotate (Photo: TecMundo)

Of course, having a virtual assistant equipped with a camera that follows you around generates a series of doubts, mainly related to privacy. To guarantee this security to the user, the processing that triggers the movement of the screen takes place on the device itself, that is, no image or video is sent to the cloud to provide the movement feature.

To do this, Amazon uses audio location and computer vision to understand the user’s position in the room. Therefore, every time you want to change the Echo Show 10 in the house, you need to recalibrate this movement functionality so that it understands the new space around you. The Echo Show 10 has a Mediatek 8183 processor with an integrated Amazon AZ1 Neural Edge to make Alexa more responsive. 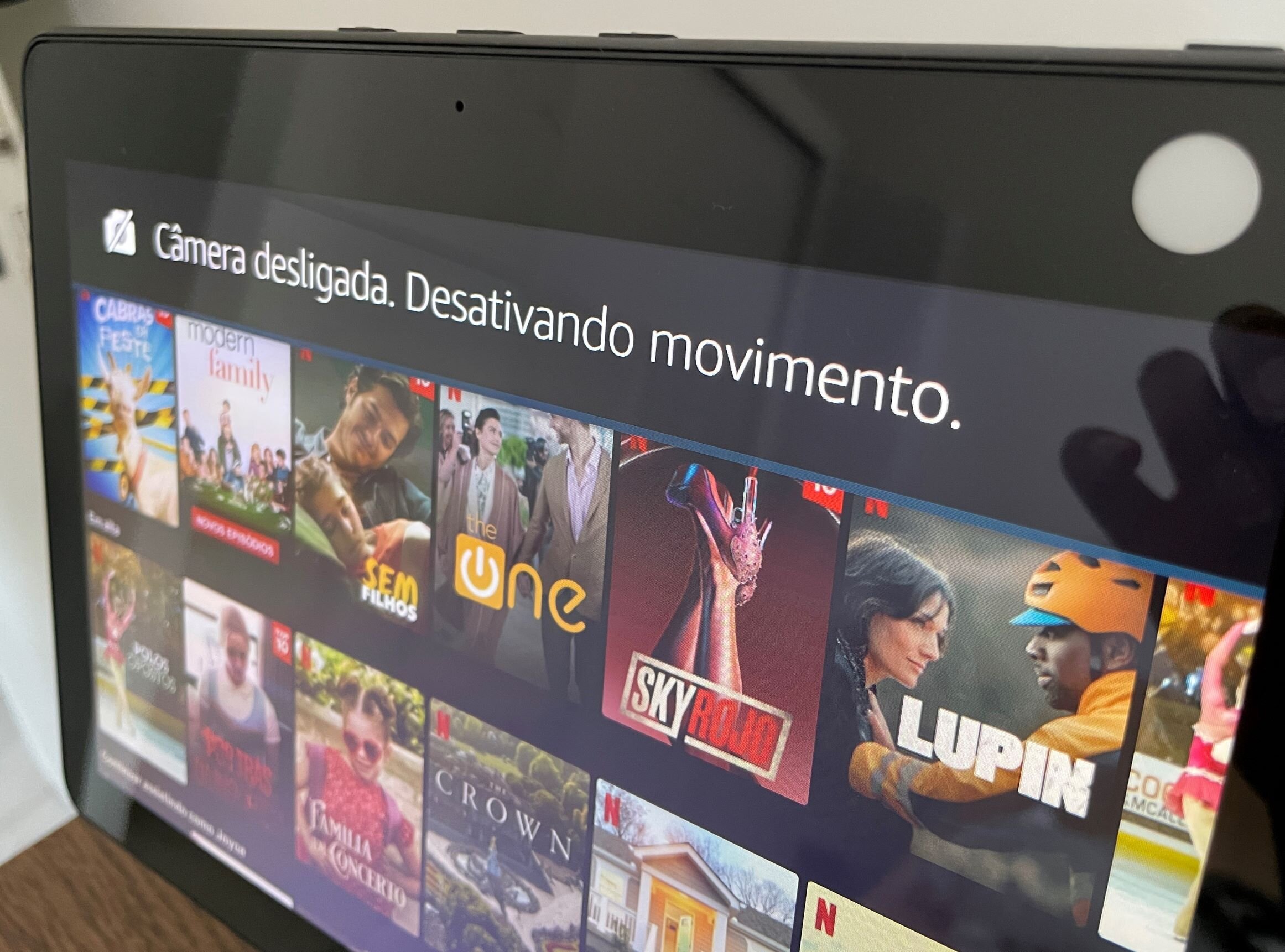 Automatic tracking worked well when I was alone, taking a little while to find me if I walked too fast. But he was confused when someone else entered the room or when the TV was a little louder.

However, in the Echo Show 10 settings, you can decrease the screen’s turning radius, set an exact idle position (where it will be when you’re not tracking something), and even disable motion completely.

You can also turn off the motion feature at any time by sliding the camera cover on the key at the top, adjusting the settings by the device itself or in the Alexa application. And, of course, you can also just say “Alexa, turn off the movement”.

In addition to serving well when making a video call or reading a recipe while cooking, for example, the Echo Show 10 can also function as a kind of internal surveillance camera. That’s because you can access the device’s camera remotely through the Alexa app on your smartphone.

You can zoom in or out to see the whole environment, open the microphone to talk to your dog or cat while you’re at work, or hear what he’s up to there. But there is nothing discreet about the feature: when you access the Echo Show 10 remotely, a giant alert appears on the screen indicating that “a member of the family account is seeing your camera”. 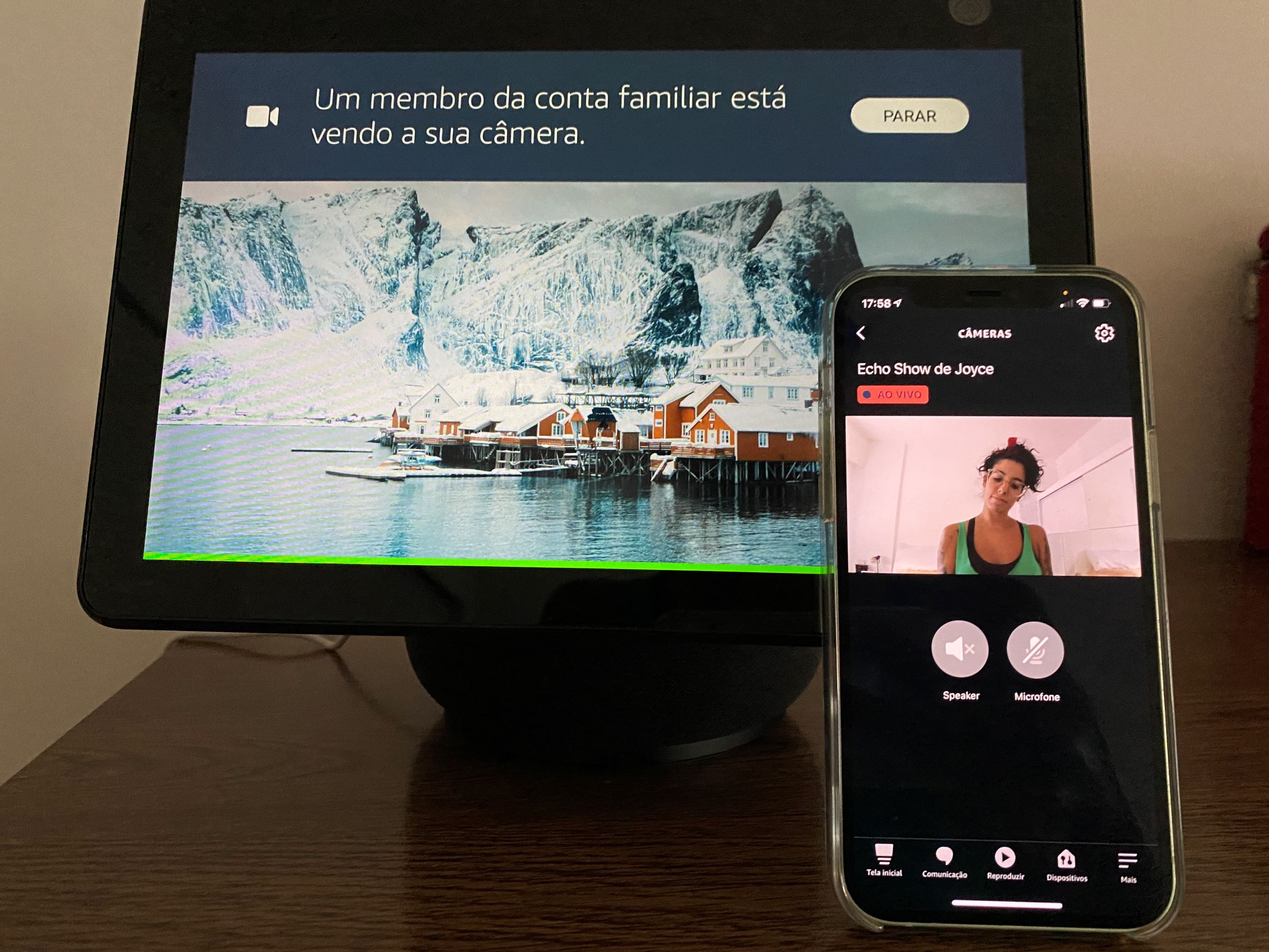 Echo Show 10 was launched outside of Brazil for US $ 250, but here it arrives for R $ 1,899. This is the most expensive Echo ever seen in these parts. Despite being the most complete model, the Brazil price is still too high for a digital assistant, especially if you are not a hard user.

Those who live in a small apartment and do not have as much space option to put the device free in a relatively large radius, should also rethink the purchase.

In the end, the experience is fun and curious, but the primary functions of an Echo Show can be served by models that are much more affordable.