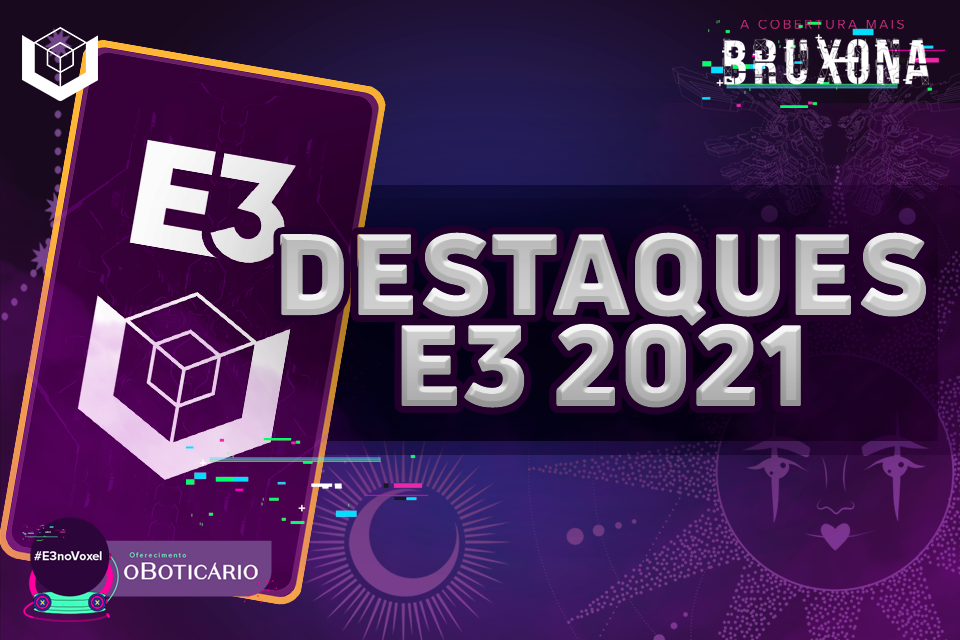 After 4 days in a row, E3 2021 ended last Tuesday (15). Despite being considered bad by many fans, the truth is that the fair revealed good news on the panels. In addition to details about long-awaited games, the broadcasts also reserved title surprises that virtually no one expected.

Check out, below, the compilation that Voxel prepared with the 13 highlights of the event.

Despite having already talked and shown a lot about the coming Far Cry 6, Ubisoft surprised during its conference and announced the Season Pass “Be the Villain”. The content will have the differentiated proposal of making the antagonists Vaas, Pagan Min and Joseph Seed playable. The company noted that this is the first time the franchise will have such gameplay, and the trailer left a lot of people excited.

At the high point of their conference, Ubisoft presented a beautiful trailer about Avatar: Frontiers of Pandora. Advertised several years ago as “The Avatar Project”, in addition to the first official video, the title won a launch window for 2022 and confirmation that it will come out for PlayStation 5, Xbox Series X/S, PC, Stadia and Luna. The game material was certainly one of the most beautiful of the entire event.

Bethesda and Microsoft presented to the world, at this E3 2021, the game redfall, Arkane’s new project that will be exclusive to Xbox. Despite winning only one cinematic video, the game drew attention for the charisma of the protagonists and the dark vampire theme. The companies have already revealed that it will be a cooperative open-world FPS, which promises to guarantee hours of fun with friends.

Remember that rumor that PlayGround would be making a new Forza Horizon? So, at the Microsoft + Bethesda E3 2021 presentation, this rumor was confirmed! Forza Horizon 5 set in Mexico, promises to be the biggest title in the franchise, will have improved graphics and visuals that will leave any car fan with their jaws dropped. Forza Horizon 5 arrives November 9 for Xbox One, Xbox Series X and S, PC and xCloud.

Diablo 2: Resurected won a trailer to shake the legs of any gamer who played the classic version back in 2000, further showing the improved visuals of this new version. In addition, the title was released on September 23 this year, will coop up to 8 people and run at 4K and 60 fps on consoles and PC. Diablo 2: Resurected will arrive in September for PS4, PS5, Xbox One, Xbox Series X/S, PC and Nintendo Switch.

Rainbow Six Extraction before revealed as Rainbow Six Quarantine received a movie trailer and a gameplay trailer during Ubisoft’s presentation at E3 2021. The game will be PvE, with up to 3 players coop, where the team will have to eliminate monsters created by a parasite. In addition to the skills of operators already known in the Rainbow Six Siege, the game will bring new abilities and unique mechanics. Rainbow Six Extraction arrives September 16 for PS4, PS5, Xbox One, Xbox Series X/S, PC and Google Stadia

How about a nice surprise? Although a rumor circulated before E3 2021, see Stranger of Paradise: Final Fantasy Origin revealed was a delight to fans. Created by Team Ninja (from Ninja Gaiden 2 and Nioh) with Koei Tecmo, the game brings an approach of dark souls in the guise of the first Final Fantasy, picking up themes like chaos and the warriors of light. The game already has a demo on PS5 and arrives in 2022 for new and old generation, and PC.

For those who are a longtime fan of the franchise metroid, E3 2021 was a date for surprises. Although we don’t see anything of the long-awaited Metroid Prime 4, Nintendo presented fans with a game that few dreamed of: Metroid Dread, the fifth 2D game in the series that is in the hands of the creators of Metroid Samus Returns. The game arrives on October 8 at Switch.

In addition to the Mario Party franchise returning with the best boards ever created, bringing various content from Nintendo 64 games, Mario Party Superstars it will also be Nintendo’s first game with PT-BR subtitles, something that even created an internet fan campaign for the company to bring more subtitled games to Brazil. The title arrives on October 29 at Switch.

10. Marvel Guardians of the Galaxy Revealed

It seems that Square Enix has learned from the mistakes of Marvel’s Avengers and works to please fans who enjoy singleplayer experiences. Marvel Guardians of the Galaxy will be a campaign game, without DLCs or microtransactions, in which players control Star-Lord, the leader of the Guardians of the Galaxy. In addition to a lot of action and comedy, the game will bring a system of narrative choices that can please enthusiasts for a good plot.

Marvel Guardians of the Galaxy arrives on October 26th on PS4, PS5, Xbox One, Xbox Series X/S and PC. A version of Switch will also be released, but it will run via the cloud.

After three long years without any details, starfield appeared at the Xbox conference with Bethesda, kicking in the door with a stunning trailer and even exact release date: November 11, 2022! Initially taken as the “fallout in space”, the game is one of the most promising projects in the industry and will be exclusive to the Xbox Series X/S (and PC).

Bethesda’s Todd Howard later said that he will either be an “Indiana Jones in space” or a “Han Solo simulator,” which makes it all the more interesting. On top of that, the game is on the Game Pass at launch.

Summer Game Fest started two days before E3 2021, but it’s impossible not to put it in the same basket (just like Sony did when it left E3, but it had a conference on the same date). The biggest revelation there, without a doubt, was the bombastic trailer for Elden Ring, new game by Hidetaka Miyazaki, from dark souls, and George R. R. Martin, creator of Game of Thrones.

The video brought everything fans wanted: a dark fantasy medieval world filled with strange creatures, an open world theme and lots of snippets that give a taste of the gameplay. Elden Ring arrives January 21, 2022 on PS4, PS5, Xbox One, Xbox Series X/S and PC.

Revealed at E3 2019, the sequence of Zelda: Breath of the Wild is one of the most anticipated games on the market. Despite the long delay in seeing new features, the game finally got a new trailer that shows more of the fantastic world of Nintendo during E3 2021! There are still few details, but they are enough to raise our hype sky high, like the link at the beginning of the video. the sequence of Zelda: Breath of the Wild arrives in 2022 on Nintendo Switch.

So, what did you think was the highlight of E3 2021? Leave your opinion in the comments section below!