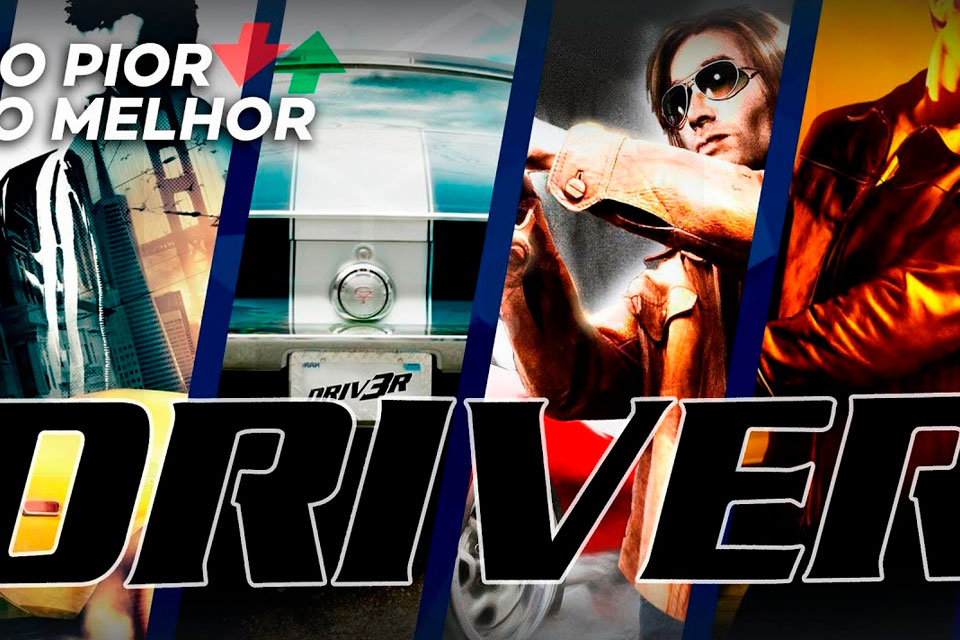 Most of the time we think about racing series in the gaming world, it comes to mind Need For Speed, force, Gran Turismo and so it goes. But one that has gained a great cult status in recent years and gained space among these, even without releasing recent games, is the one we’re going to talk about today.

Stuck in the car or not, the important thing is to finish off the criminals with speed and style. You asked, voted and here’s the one from Worst to Best in the franchise driver. Here are our criteria, pay close attention:

We start with the most recent game on the list. Launched in 2011, Driver: Renegade, follows protagonist John Tanner abandoning New York police and saving Senator Andrew Ballard, who promises to help Tanner end the city’s crimes at all costs.

In total, the 3DS exclusive features 80 missions and 50 cars that can be tuned in the garage, 7 Challenge Modes, with Time Attack and Road War in between, and StreetPass support along with other online connections via Nintendo Wi-Fi Connection .

Despite having very robust driving mechanics, there is little variety in the missions, the acting and dialogue are horrible, the city is empty, the graphics very weak and it is very easy to break the game, forcing the player to restart the mission. Your grade is 48.

Driver 3, released in 2004, was ranked sixth on our list. In the story, FBI undercover agent John Tanner is investigating car smuggling and is tasked with identifying the scheme’s leaders and finding out who they were planning to sell the vehicles to.

The game takes place in three different locations, which are Miami, in the United States, Nice, in France, and Istanbul, in Turkey. In “Undercover” mode that is the story, the player can not only drive his car through cities but also get out of them and even exchange shots, with a third person camera. In addition to this mode, there is also “Take a Ride”, which allows the player to freely explore the maps, and “Driving Games”, which is composed of challenges. Besides the shooting, other things introduced in the game were boats, life bar, motorcycles and the possibility to swim.

While some reviewers praised the graphics, car crashes and locations, others criticized the clunky controls, unresponsive and harsh animations, glitches, various frustrating parts, and the repetitiveness of the missions, all of which brought a feeling of unfinished product. Your grade is 51.

Driver 76, released in 2007, was the first game in the series to reach handheld consoles exclusively. The story is a prequel to Parallel Lines, set in 1976, in New York City, and follows Ray and his partner Slink who get involved in various gang problems related to the father of Ray’s love interest.

The missions are structured in chases and escapes with vehicles combined with firefights, as well as in Parallel Lines. In total, the 26 main missions are divided into 6 chapters and they get more and more complicated, but yield good rewards like money, cars and weapons.

Even though the 70s funk-based soundtrack and the entire comic book story are all positive points, the short, predictable story, the dull police chases, the random loading times, the empty streets and the lack of things to do are very negative. Your grade is 57.

Driver 2: Back on the Streets, or Driver 2: The Wheelman Is Back, released in 2000, ended up in fourth place. The story follows John Tanner and Tobias Jones, who are assigned to investigate Pink Lenny’s connection to Chicago gangs after being involved in a crime that left a man who worked for Alvaro Vasquez, the leader of a Brazilian criminal organization, dead.

The game introduced exploration on foot and the possibility of taking on other vehicles to drive, as well as bringing a more realistic approach to gameplay. It contains a very large variety of cars, which is based on real vehicles like Chevrolet, Ford and GMC and takes place in 4 very different cities: Chicago, Havana, Las Vegas, and Rio de Janeiro.

Analysts were evenly divided, some loving the title and others not so much. While some felt that it improved everything that the previous one had presented, others felt that it had less shine than the first game in the series, being rated as one of the biggest disappointments of the year 2000. Its grade is 62.

Driver: Parallel Lines, released in 2006, took the bronze medal on our list. The game takes place in New York, between 1978 and 2006, following pilot TK who is seeking revenge on a gang he worked with during his youth after they framed him for the death of a major drug dealer.

Its map is a very large open world, it focuses more on the racing parts, brings several new features such as automatic aiming, money system, fully modifiable cars, destructible environments and, to close, the visuals are completely different from the time when if they pass.

Analysts liked the stable frame rate, the large number of side missions and the good soundtrack in the 1978 part, but criticized the shallow story, the decent maximum gameplay and all the copies they made of the franchise. GTA. Your grade is 64.5.

Second, tied for the most recent item on the list, we have one of the fans’ darlings. Driver: San Francisco, released in 2011, follows John Tanner who is in a coma after a chase after his nemesis Charles Jericho. Now, the detective must put together a plan in his dream world that will take place in the real world.

A new mechanic called Shift was introduced, which allows Tanner to teleport from one car to another without disrupting the mission. Another very interesting thing is that the getting out of the car mechanic, introduced in the second game of the series, has been completely removed, going back to the origins of the series. The game features online and local multiplayer with 19 different modes, including sprint GT, tags and trailblazer. In 2016, the game was removed from all online stores, so it is no longer possible to purchase it.

Analysts praised Shift’s mechanics, which make gameplay faster and more fun, the massive open world, the huge amount of content and fun online modes, but criticized the ridiculous story, split screen frame rate issues and repetitiveness of the missions near the end of the story. Your grade is 75.75.

And first and foremost, the first game in the franchise. driver, released in 1999, follows undercover police officer John Tanner, who infiltrated the world of illegalities to investigate criminal operations and ends up discovering a plot to kill the president of the United States.

The title is set entirely in vehicles and was inspired by car chase movies, being the focus of gameplay. Four different cities are present, which are Miami, San Francisco, Los Angeles and New York. There is also Newcastle Upon Tyne, an unlockable bonus town that has no quests available and has a very small area. All of them give the player freedom to explore as they wish.

The game was a complete success in relation to the specialized media. Analysts praised it for its deep and fun gameplay, its balance between action and realism, and its typically Hollywood concept. At 87, he takes home the gold medal. Drive safely.