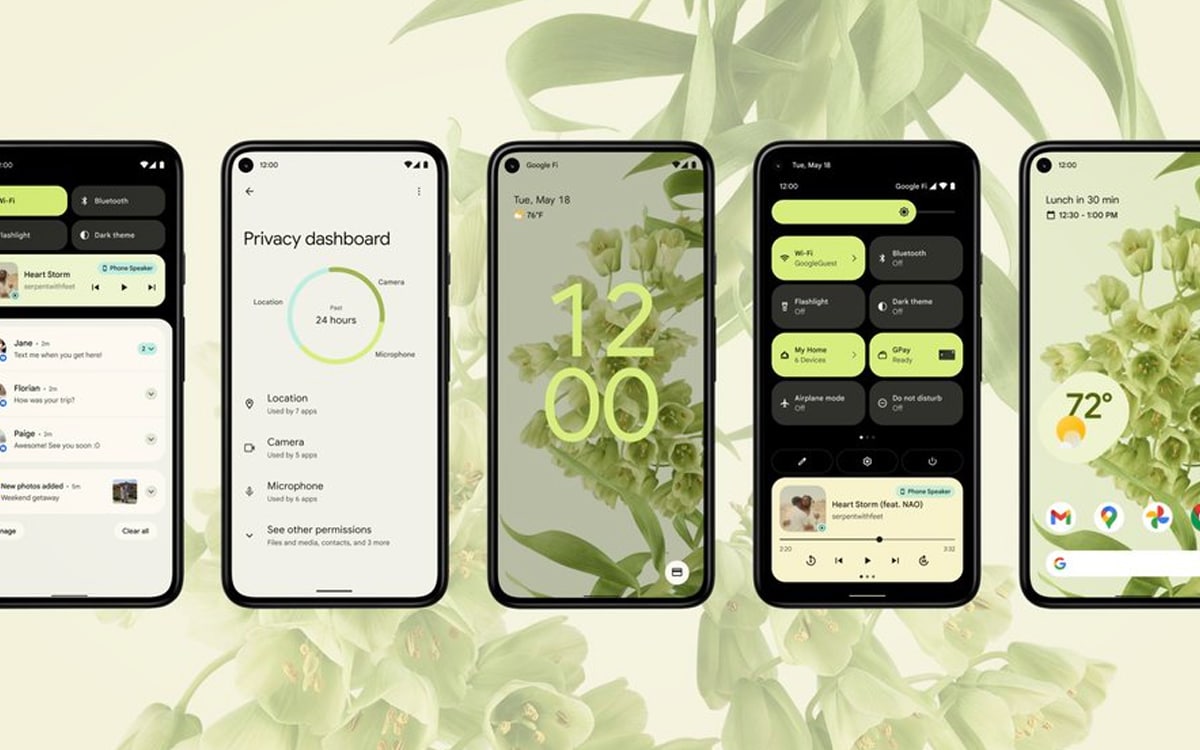 Android 12 is launching a complete redesign of the stock interface of which we had so far only rediscovered traces in the meanders of the source code. Changes that are starting to appear in the first public beta of the operating system available since last night. This is what the new Material You design looks like.

Google took advantage of the Google I / O 2021 conference to launch the first public beta of Android 12. This beta concludes the developer beta phase which gave us a first glimpse of the operating system. During the Developers Preview phase, the operating system did not really include any visible changes compared to the interface of Android 11. But developers, especially at XDA had managed to activate a new design by triggering inactive pieces of code .

Originally known as Material NEXT, the new design was eventually dubbed Material You. As the name suggests, the leitmotif of this new visual language is a increased customization. For example, when you change the wallpaper, Android 12 now asks you if you want to apply a system theme at the same time based on the analysis of the colors of your image by artificial intelligence.

Android 12: here is Material You, a new interface very focused on customization

As you can see in the animation above, the theme changes colors in various places like notifications, lock screen, widgets, google apps and even some third party apps. On the other hand, we have bad news. Initially, these system themes adapted from your wallpapers will be exclusive to Pixel smartphones. Google explains that the feature will be available on smartphones from other brands at a later stage.

These themes are far from being the only novelties. Google has indeed changed its design language quite profoundly. As for example with the new control center with rectangular buttons with rounded edges. Or the notifications panel which stands out better thanks to the use of a distinct color.

Google has also worked a lot on the animations, to give an impression of speed by reducing their duration.. But speed isn’t all about entertainment. Google has spent a lot of time optimizing Android 12. And the effect of these optimizations is significant: for example the CPU usage is down by up to 22% in some cases compared to the previous generation.

Sign of the period, Google has also put a lot of emphasis on privacy protection features.. A new dashboard dedicated to privacy makes it possible to see at a glance the settings of the permissions as well as to consult the accesses of the applications to the data within the framework of these permissions. As on iOS 14, an indicator in the status bar lets you know at any time whether an application is accessing your microphone or your camera.

Android 12: Material You is being rolled out

There are also new settings to disable access to these devices at the system level, so you want to be sure that no applications can access them. Google now offers more granular control over the data you share with apps. For example, it is possible to choose between access to precise location or access to approximate location – in this case weather applications do not need to know your precise location.

Wider, Google has better integrated privacy protection into core system functionality. Google launches in particular Android Private Core which is a system component that forces the new technologies deployed in Android 12 to be privacy protectors by design. Google mentions the case of Live Captions, Now Playing and smart responses: all sound and language processing is done through the Android Private Core locally to protect privacy.

Read also: Android 12 responds to iOS 14.5 on the collection of private data by applications

The video at the very end of the article will give you an additional overview of the new design features of Android 12. Note, if you have installed the beta, that these design changes are still being deployed and are based on a server component and users report that new interface elements are gradually appearing on their smartphones. If you have the impression that your Android 12 installation still looks like Android 11, we advise you to wait a few days for your smartphone to join the Material You deployment.