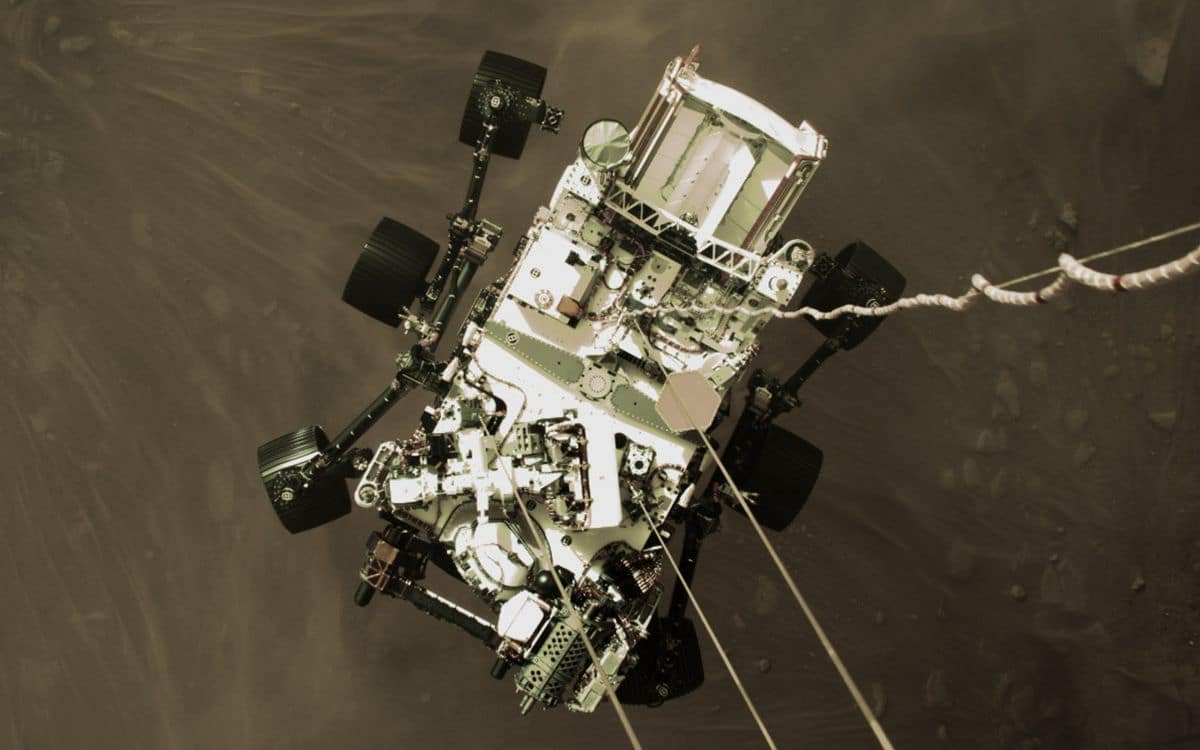 NASA has released an incredible video of the arrival of the Perseverance rover on Mars. This is the first time that such a maneuver has been filmed. In addition to that, the American agency unveils a panorama captured by the rover and makes us listen to the wind of the red planet.

The descent of Perseverance on Mars was a very risky moment for NASA. For exactly seven minutes, the module was subjected to hellish conditions, hit hard by extreme heat and severe deceleration. But in the end, it landed well on the ocher soil of the planet and today he shares this historic moment with us.

NASA has indeed filmed the entire descent and shared it on the rover’s Twitter account (end of article). This is the first time that such an operation has been filmed and it gives us an idea of ​​the atmosphere there. The video lingers on the end of the descent and is captured from several angles. We see the parachute opening, the planet’s ground slowly approaching and the release of the heat shield. The very last action is to drop the rover itself onto the sand using cables, an extremely delicate maneuver, as can be seen. Then comes the famous “touchdown” and the joy of NASA engineers.

Once landed, the rover sent to Earth the first high definition photos of his trip in an interactive panorama that can be admired on Youtube. As we can see, the images are fascinating, Perseverance being in the heart of a desert of silent beauty. The location chosen by the US space agency owes nothing to chance. The rover is indeed resting in the bed of a dry delta. The perfect place to determine if, in addition to liquid water, life has already sprouted in the Red Planet’s past.

Perseverance captures the sound of the wind

NASA gave us the image, but also the sound. Indeed, in an audio document, the American agency reveals the sound of the Martian wind. It’s stealthy, we hear two short bursts, but again, this is still extraordinary data reported by the probe. This is the first time that the Martian wind is captured under real conditions.

Read also – Perseverance on Mars: how to review the Martian mission

The mission will span several years and you can expect to receive thousands of photos and videos, as has been the case with the Curiosity mission since 2012. For now, Perseverance is still in its entry phase but should get to work in earnest in the coming weeks. Samples should be taken regularly for analysis. NASA hopes to keep them in order to come and collect them in a few years via another mission to return to Earth. The goal would be to analyze them in an over-equipped Earth laboratory. Scientists would like to determine if the dry delta soil contains traces of ancient bacterial life.

The United States isn’t the only one exploring Mars this year. Indeed, China and the United Arab Emirates both launched a probe last year, taking advantage of the Red Planet’s close position to Earth. They all arrive this month on their goal. The Chinese probe Tianwen-1 has placed itself in Martian orbit and intends to send a module there around April. The goal is again to analyze the soil. Hope, the United Arab Emirates module, has placed itself in orbit around Mars and will remain there. For this mission, no landing is planned, since the objective of the module is to analyze the atmosphere as well as the weather of the Red Planet.

We are now waiting to see what Elon Musk has planned …