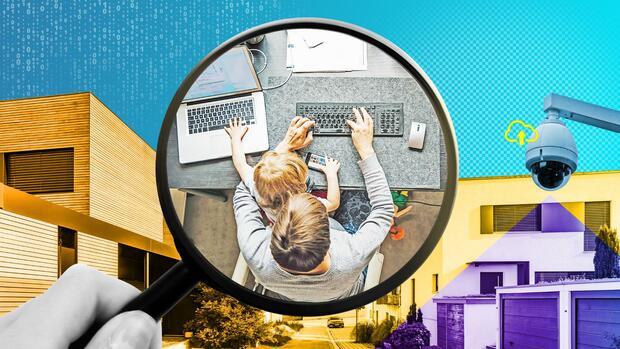 Dusseldorf It sounds like a bad crime thriller. Detectives have been watching a suspect’s apartment for days. He opens the front door, goes outside to his car and drives off. His goal: a hardware store. His purchase: ready-rolled grass. The client is an entrepreneur who, thanks to meticulous investigative work, is now certain that his employee is avoiding the job.

When employees are in the home office because of the corona pandemic, many bosses wonder what they are doing there. According to media reports, detective agencies receive numerous orders from companies that distrust their people. At a Frankfurt company, there are currently supposed to be up to 25 customer inquiries per day, reports “Die Zeit” and the “Hamburger Abendblatt”.

But it is no longer just private investigators who put a lot of effort and money into shadowing employees. Contrary to what was reported, the Federation of International Detectives (BID) was unable to find a higher demand for the clarification of “home office fraud” in a nationwide survey of members. Instead, a new monitoring method is apparently coming into fashion.

Digital surveillance programs, also known as “monitoring tools”, have been raging since the outbreak of the corona pandemic. The start-ups that develop these tracking programs come mainly from the United States and have names like ActivTrak, Timedoctor or Hubstaff.

In the United States, many companies, including American Express and Bank of America, use such surveillance programs. Works councils that could raise objections are rare in the land of unlimited possibilities, and there are hardly any employee rights.

It’s different in Germany. “There is clear jurisprudence here,” says labor lawyer Peter Wedde from the Frankfurt University of Applied Sciences, who did his doctorate on remote monitoring of teleworking. “Total surveillance, in which the employer can monitor each individual work step, is not permitted in Germany.”

But that doesn’t seem to stop companies in this country from using such programs. Upon request, the US monitoring start-up Hubstaff confirmed that there are also inquiries from Germany and other European countries. Hubstaff does not disclose which customers are behind it. Only this much: Since March, demand has been three times higher than in the previous year. This is despite the fact that there are not only high legal hurdles, but also doubts about the effectiveness.

Control instead of trust

Employers have been controlling their employees since the very beginning of industrialization. At the end of the 17th century, for example, the English textile entrepreneur Ambrose Crowley rang a bell every day at 9:00 p.m., which signaled the start of the curfew in the workers’ settlement that he had built for his employees. Drinking alcohol was not allowed, and other activities that affect the workforce were also punished. Until the mid-19th century, some factories in England even banned employees from wearing their own watches. The entrepreneurs had control over time.

Since then, employment relationships have changed. But then as now, employers are concerned with ensuring employee productivity or increasing it. It is easier for employers to implement this in factories or office buildings. In the home office, however, you can no longer control every single step. Employers have to trust their employees – or they can use Hubstaff software.

The US start-up promises to be able to significantly increase employee productivity in some cases. Companies would have to spend ten dollars a month on each employee. Once activated, the employer has a wide range of monitoring methods available. This ranges from the simple recording of keystrokes and mouse movements to monitoring surfing behavior on the Internet to GPS location of employees.

Timedoctor offers further monitoring functions. Videos are recorded from an employee’s screen at regular intervals. The webcam also takes a photo every ten minutes to ensure that the employee is seated at his work place.

But Hubstaff and Timedoctor are only the first step compared to Enaible. The Boston start-up also uses an algorithm to automatically evaluate the data collected without a person having to assess the quality of the work. The advertising agency Omnicom Media Group is already using Enaible, the company is in talks with the US airline Delta Airlines and the US pharmacy chain CVS Health. Demand has quadrupled since the outbreak of the corona virus.

Founder Tommy Weir told the technology review “Technology Review” how his software works: “Imagine you are leading employees and you can look over their shoulders all day and give advice on how they can do their job better. That is what we are trying to do with our tool. “

Employees receive praise and criticism from the machine in the form of productivity values. Artificial intelligence is becoming a whip. The manager only sees the end result. For some, that might sound like a horror scenario.

No plus in productivity

And it is also extremely questionable how useful such surveillance is. There are studies that suggest that this does not increase productivity. In the study entitled “Watching Me Wachting You”, British anthropologists Michael Fischer and Sally Applin found that workplace monitoring led to people changing their behavior more often to adapt to the behavior of machines. Her conclusion: monitoring does not necessarily make it more productive, but rather more machine-like.

Industrial psychologist Simone Kauffeld from the TU Braunschweig also regards employee monitoring – whether analog or digital – as critical. Together with colleagues, she uses a survey to investigate the effects of the corona pandemic on virtual collaboration.

“From an occupational psychological point of view, I find that a no-go,” she says. The employer does not have to receive a report on every single work step or working day. “The only thing a manager needs to know is whether an employee can complete a task in a certain amount of time.”

Permanent digital monitoring could severely disrupt the relationship of trust between employer and employee, especially since not all employees in the home office can be equally productive, as Kauffeld explains. “There will be those who say that they are much more productive in their home office. However, other workers will be happy to be able to work in the office again. ”

Even Patrick Kurtz, who offers surveillance services for companies and private individuals through his detective agency, has doubts. Especially in times of home office, a check makes little sense, since working hours at home can be made more flexible than in the office.

“Just because someone goes out and runs errands does not mean that they are not doing their job properly,” says Kurtz. In addition, the living area belongs to the personally protected living area, which is absolutely taboo for private investigators, such as in the Kurtz detective agency in Düsseldorf.

“And as far as digital surveillance options are concerned, there are clear legal restrictions in Germany. If we want to install spy software on a computer, we first need the user’s consent. That’s why the legal area of ​​application is very small, ”says Kurtz.

In the modern world of work, digital monitoring tools are already reaching their limits. Professions in which the activity repeats itself every day, for example in the call center or in customer care, can best be evaluated statistically. “But there are professions whose work productivity simply cannot be measured with such tools,” says labor lawyer Wedde.

The digital monitors fail when it comes to creative jobs or jobs without a fixed workflow. They are also unable to record the work if, for example, an employee gathers ideas for a new strategy or project and does not type them into his computer, but into his notebook.

“Ultimately, these tools are only statistical programs that run with high computing power. These programs say little about the quality of an employee’s work, ”says Wedde. At most, they suggest an objective evaluation of labor productivity.

The behavior of employers who tend to digitally monitor their employees is contradictory anyway. The outcry among many employers was great when the EU decision on working time control was adopted last year. They argued that working time recording was incompatible with trust working time.

“However, it becomes paradoxical when employers now use monitoring tools to control employees in their home office. Trust working hours and simultaneous control do not go together, ”says Wedde. And companies take considerable risks if they shade their employees without being asked.

Because the General Data Protection Regulation (GDPR) sets narrow limits when it comes to collecting data. According to Wedde, employees would have the possibility to make claims for damages based on the GDPR if they were monitored without a legal basis or without written consent at the workplace. If a company can be proven to have illegally monitored employees, there is even a penalty of up to four percent of the group’s sales.

Wedde’s conclusion is: “A good manager should be able to assess the productivity of his employees even without technical tools.”

More: The corona crisis is a blueprint for future HR strategies. Five trends that could shape the corporate world in the long term.