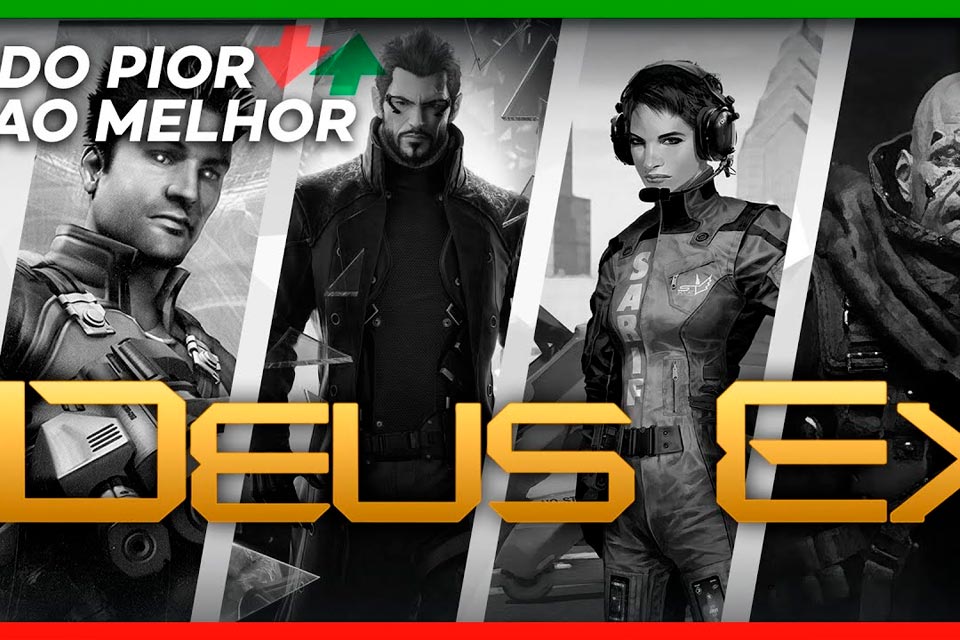 The late 1990s and early 2000s were full of trial and error. There were so many games released, whether good or bad, that many were forgotten, even those that revolutionized the market.

The series came, disappeared, reappeared and disappeared again, but hope remains in the hearts of fans. You asked, voted and here’s the one from Worst to Best in the franchise Deus Ex. Here are our criteria, pay close attention:

We start with the spin-off Deus Ex: The Fall, launched for mobiles in 2013 and the year after the PC. Developed by N-Fusion Interactive under the supervision of Eidos Montréal, the title takes place in parallel with the opening of Human Revolution, the first title from a chronological point of view. Its plot follows fugitives Ben Saxon and Anna Kelso, who are trying to hide from Illuminati forces.

The game tries to get closer to the gameplay of Human Revolution, mixing FPS, stealth and RPG, allowing the player to explore Panama City and customize the characters’ abilities. One of Saxon’s main abilities are augmentations, present in other games in the series, which protect various parts of the body in addition to bringing passive improvements, such as new hacking possibilities and dialogues with NPCs, and active ones, such as movement and combat.

Even though it all looks wonderful, I guarantee it isn’t. The game received praise for adapting the franchise to mobile systems, but criticized for microtransactions, technical problems and buggy controls, especially in the PC version. Your grade is 57.

Deus Ex Go, released in 2016, is a turn-based puzzle in which the player controls Adam Jensen, the protagonist of some games in the franchise, through a board full of obstacles that must be avoided or overcome to complete the levels. Jensen can use his hacking skills to control scenery items like turrets or eliminate enemies. If you don’t know how to resolve the scenario, you can purchase the solutions through microtransactions.

The game is not part of the franchise Deus Ex in relation to the plot, since it is non-existent, but it is a new title in the Go subseries, which already has other games like hitman go, 2014, and Lara Croft Go, 2015.

For analysts, Deus Ex Go it managed to capture all the tech dystopian vibe that the main franchise brings along well with its very complicated puzzles, but it was criticized for having no story, its visuals being less interesting and it having a short duration. Your grade is 80.

Deus Ex: Invisible War, released in 2003, was the second game in the series to hit the market, but it is the last in the chronology. It takes place 20 years after its predecessor and follows Alex D leaving Chicago for Seattle after a terrorist attack that is more than just an attack. Like the other mainline games, the plot develops according to the player’s actions, whether making decisions or talking to NPCs

Its gameplay mixes FPS, stealth and RPG, giving the player a freedom to go through the stages in the way they prefer, but without getting rid of the consequences of that. Various lethal and non-lethal weapons are available, of different caliber and damage. During the plot, it is possible to acquire biomods, which are bodily and mental modifications in order to bring passive and active improvements to the character. The game contains some areas that the player can accept quests from NPCs, some being secondary and others linked to the main quest.

Analysts complained about some things, like elements of the universe presented in the first title that were ignored in this one, some narrative problems and inconsistencies in the gameplay structure. The rest were compliments, like the freedom in gameplay, the immersive story, the amount of choice, the extensive voice acting, its brilliant RPG elements and its physics. He didn’t do as well as his predecessor, but he pleased many people. Your grade is 82.

Launched in 2016, Deus Ex: Mankind Divided is the second game in the series’ main timeline. Your story takes place 2 years after Human Revolution, accompanying Adam Jensen who is equipped with new augmentations and working as a double agent for the hacker group Juggernaut Collective, aiming to expose the Illuminati. The game addresses philosophical and social issues such as segregation, in this case on account of normal humans and others with artificial organs.

The title follows the same gameplay as its predecessor, which is an update and modernization of the one presented in the first two titles in the series. It brings some new features such as “overclocking” abilities, lessening the focus of hacking to balance the other gameplay elements and new elements and components.

The title was embroiled in controversy during its marketing campaign over the use of the word “apartheid”, which is used to define the racial segregation regime that took place in South Africa between the 1940s and 1990s. They also used the phrase “Aug Lives Matter” which is similar to the name of the activist movement Black Lives Matter.

Analysts praised the rewarding exploration, the variety of mechanics and solutions to the proposed situations, the invitation to a second or third game, its beautiful soundtrack and its beautiful visuals, but the title prioritizes its themes rather than developing the plot in some moments, his performance is “eight or eighty” and his marketing campaign was extremely controversial. Your grade is 83.6.

Deus Ex, released in 2000, was the first game in the franchise to hit the market. Its story takes place 23 years after the events of Mankind Divided and it follows society arriving at a time of calamity due to a nanovirus called the Gray Death that is decimating the world’s population. A vaccine called Ambrosia is developed by a company called VersaLife, but because it has few units, they are distributed to a portion of people who are considered “vital to the social order”, such as politicians, military, rich, scientists and the intellectual elite . This caused ordinary people to rebel and terrorist groups to form with the aim of overthrowing organizations such as the National Secessionist Forces, in the United States, and the Silhouette, in France. To combat these threats, the UN creates the United Nations Anti-Terrorist Coalition, of which the protagonist with superhuman abilities, JC Denton, is a part.

It features a mix of FPS, stealth and RPG, but purports to be an “immersive simulation”, revolutionizing the video game market at the time it was released. In addition to giving the player freedom to resolve situations as they see fit, it also lets you customize your skills and weapons as you like. Initially, the game didn’t have a multiplayer mode, but it was added to the PC versions via patches, bringing modes like deathmatch and team deathmatch.

Its PC version was acclaimed by reviewers, who praised its originality, its freedom, the diverse ways of dealing with a single problem, its atmosphere and its history, but criticized for its security and lockpicking mechanics, its graphics and acting. The game’s rating dropped a bit due to its weak PS2 version, but it still figures in the top 3 with 85.5.

Who came first was Deus Ex: Human Revolution, released in 2011. The story takes place in 2027, being the first in the chronology among the main games, and follows the security officer of Sarif Industries, Adam Jensen, in a story that involves transhumanism, the growing power of megacorporations and their impacts in social class. Much of the story unfolds according to the decisions made by the player, which can greatly change the experience from one person to another.

The game focused on modernizing and adapting the mechanics of the two previous titles, increasing the consequences of the player’s approach at each stage, whether it’s sneaky, killing the essentials or acting as a devil’s envoy who must raise souls for the underworld.

The game was born many years after the company’s failed attempts to create a sequel to Invisible War, the second game in the series. With that, the development team of Human Revolution started small, but grew as the project matured. And this confidence that Eidos Montréal gave to the title directed by Jean-François Dugas was very positive, as the game received praise and more praise from analysts, in addition to having sold just over 2 million units by the end of the year, which was considered a favorable outcome.

He was acclaimed for the variety of possible ways to complete each mission, the incredible futuristic atmosphere, the complex story with pertinent themes, the fun gameplay, the well-crafted level designs and the long adventure that calls the player to a second (or even a third ) gambling. At the same time, he was criticized for weak boss battles, long loading times, dated facial animations, and poor artificial intelligence. Human Revolution received one Directors Cut in 2013 it improved several aspects of the title, but as we’re only considering the original, it got 89.3 of a note.