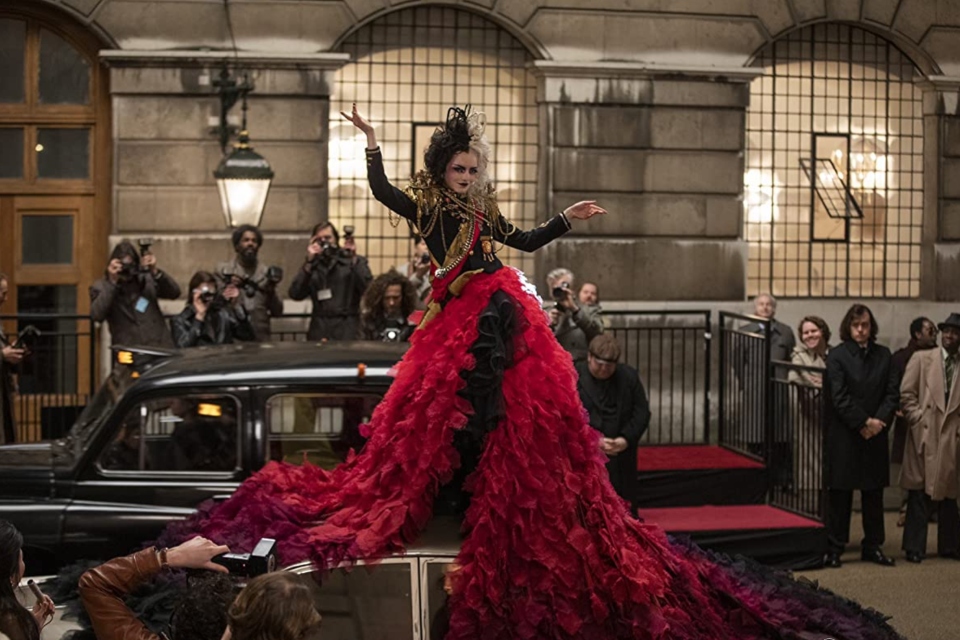 PLEASE NOTE: if you have not seen the movie, the following list may contain spoilers

Cruella made it to the Disney+ catalog in style. The original film of the studio’s iconic character is loaded with a soundtrack with the best of classic rock and punk rock from the 1970s. height of Disney’s most fashionable villain.

Jenny Beavan, two-time Oscar winner (in 1987 by A Window to Love, and in 2016 by Mad Max: Road of Fury), was responsible for creating the looks for the film, which help build the visual identity of the film. In all, 277 costumes were made, of which Emma Stone wore 47.

And, among so many clothes and dresses, we selected the most striking ones in the film. Check out! 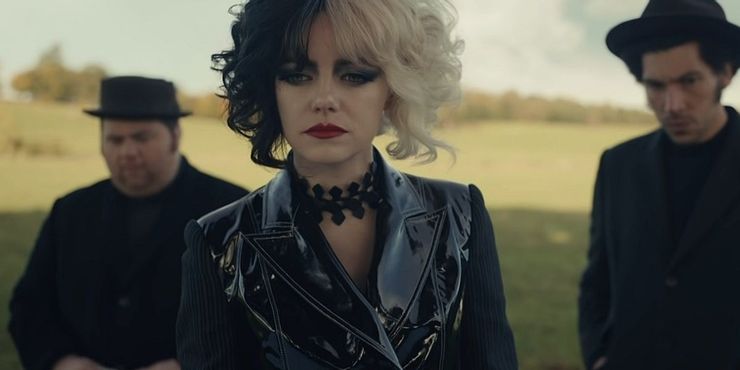 In Estella’s funeral scene, the outfit worn by Emma Stone could no longer have the face of the villain in this context. The scene is important because it marks the separation from the old to the new personality, now as Cruella. And the outfit, somewhat somber in a perfect match to the makeup, shows how she’s already taken on as a new character, as she bids farewell to that version of her that no longer exists. 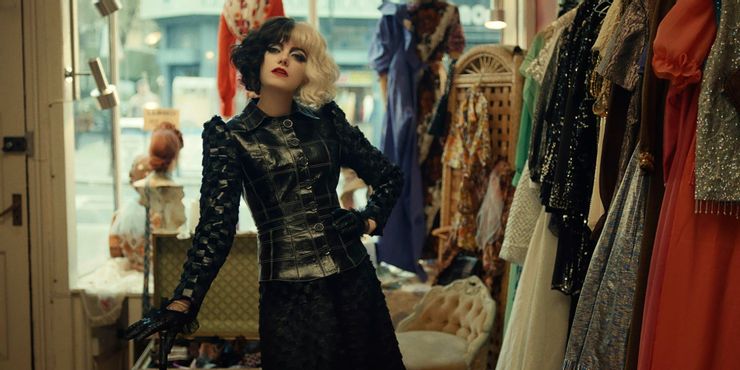 The first outfit Cruella wears after assuming her most dubious and villainous personality couldn’t be more perfect. It’s extravagant at the right limit for the presentation of the character, but without drawing too much attention, after all, the costume change should grow with the villain. At the same time, the black gloves, accessories and cane add the touch of drama that is a hallmark of his personality. 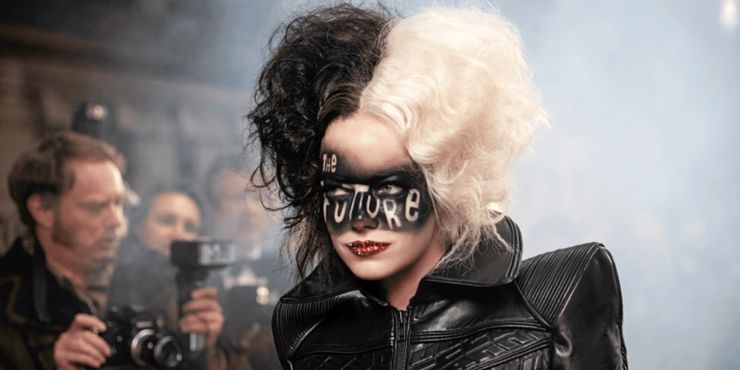 This is probably the most punk rock look used by the character and has all the “face” of the 1970s. Mixing a leather jacket with gold pants, the character steals the show, and with it manages to take all the attention of the Baroness. But the main highlight is the makeup, with “The Future” spray-painted on her face as a mask over her eyes.

At this point in the film, clothes play a key role in building the character. After Baroness Von Hellman is arrested for Estella’s murder, Cruella exits her car to her new mansion. The outfit, part of it made of latex, mixes white with black, representing the ambiguity and the two sides that the character has. 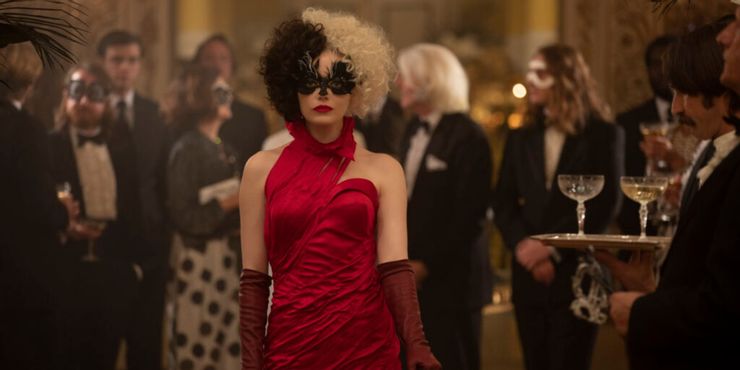 A dress that stands out precisely for being more discreet, especially when compared to others. However, the way it is presented in this sequel, there could not be a better option. Combined with the mask, which creates a cadaverous and villainous look, but without losing its elegance, this costume could enter one of the most beautiful in the history of cinema. 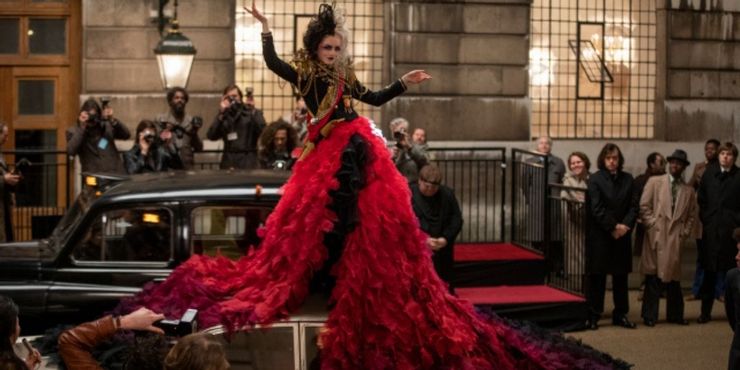 One of the more extravagant dresses worn by Emma Stone in the film is the one she wears in this sequel, with the goal (once again) to overshadow Baroness Von Hellman. Incidentally, this is a trademark of the villain, who likes to use fashion to draw attention to herself, and who fit in well with the film’s punk rock influence. The outfit still stands out for its meaning, with the upper part set in gold chains — an homage to army uniforms, signifying her place as a fashion general. The dress was made with more than 5,000 hand-stitched flower petals. 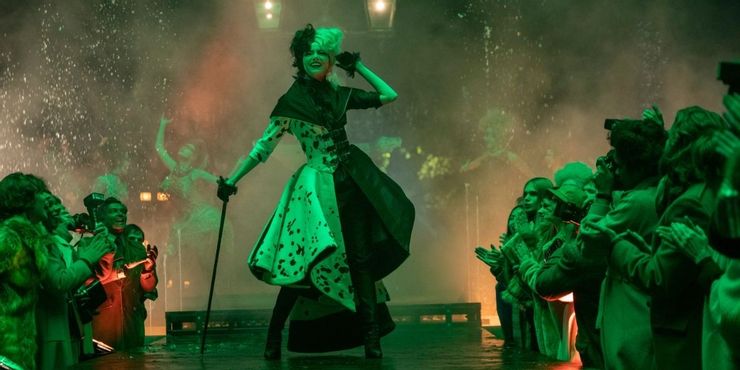 Although the character is known for its relationship with fur, Disney chose to adopt a less prickly speech, not mentioning fur during the film. However, in this scene, Cruella is very close to her original version, in a dress that appears to have been made from Dalmatian skins. The film suggests this, with the Baroness and the press believing the villain made her coat from her rival’s Dalmatians.

1. From garbage to luxury 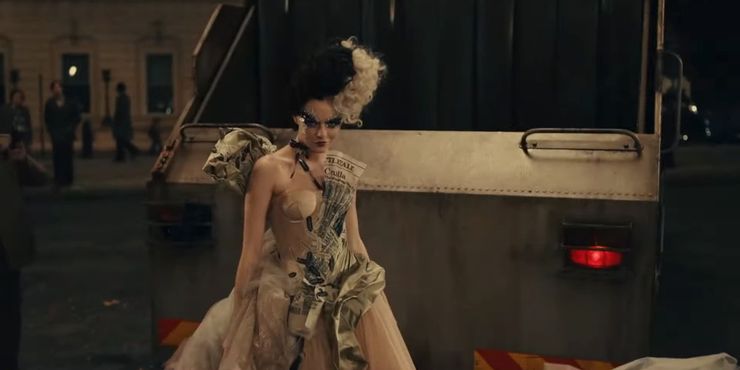 In one of the best sequences in the film, while the Baroness is giving an interview, a garbage truck stops and releases the load, which at first glance looks like discarded fabric. At this point, Cruella emerges from the mess, wearing an extremely elaborate and dramatic dress, perfectly matching the scene.