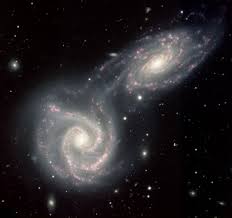 100 years ago, the known Universe was restricted to the limits of the Milky Way. Although other galaxies have been observed since at least the second century, at that time there were still no precise ways to measure the distances to these large and diffuse objects to determine whether or not they belonged to our galaxy.

In 1923, American astronomer Edwin Hubble calculated the distance to the Andromeda Galaxy and solved this problem, finding a value much greater than the known diameter of the Milky Way and confirming that these objects were, in fact, stellar island universes distinct and separate from the our.

Since then, knowledge about these structures has grown exponentially, enabling astronomers to increasingly understand the properties of galaxies, how they form and how they evolve over billions of years.

The Andromeda galaxy (M31), which Hubble calculated the distance, determining the existence of galaxies other than our own.Source:  APOD

Today, it is well known that galaxies are, on average, moving away from each other due to cosmic expansion. How is it possible, then, for two galaxies to collide? This is because some, especially those that are in environments such as groups and clusters, are not very far apart compared to their individual sizes.

One of the implications of this is that the effect of gravity between them is greater than the effect caused by the expansion of the Universe, which consequently makes two galaxies interact gravitationally with each other. These interactions provoke close encounters between them and, at times, make them collide with each other and merge completely, in a true “cosmic dance”.

Although it is not possible to observe all the steps of this “dance” in a single pair of galaxies, as the whole process can take millions of years, there are numerous dancing pairs in the Universe, each one of them at a distinct moment and stage, which allows astronomers to combine theory with imagination and creativity, putting together the complete picture with the steps and the general idea of ​​how these dances work.

Furthermore, several computer simulations and modeling (using point masses and test particles) have been able to successfully reproduce the structures that are observed in interacting galaxies, further strengthening theories of how these processes occur. 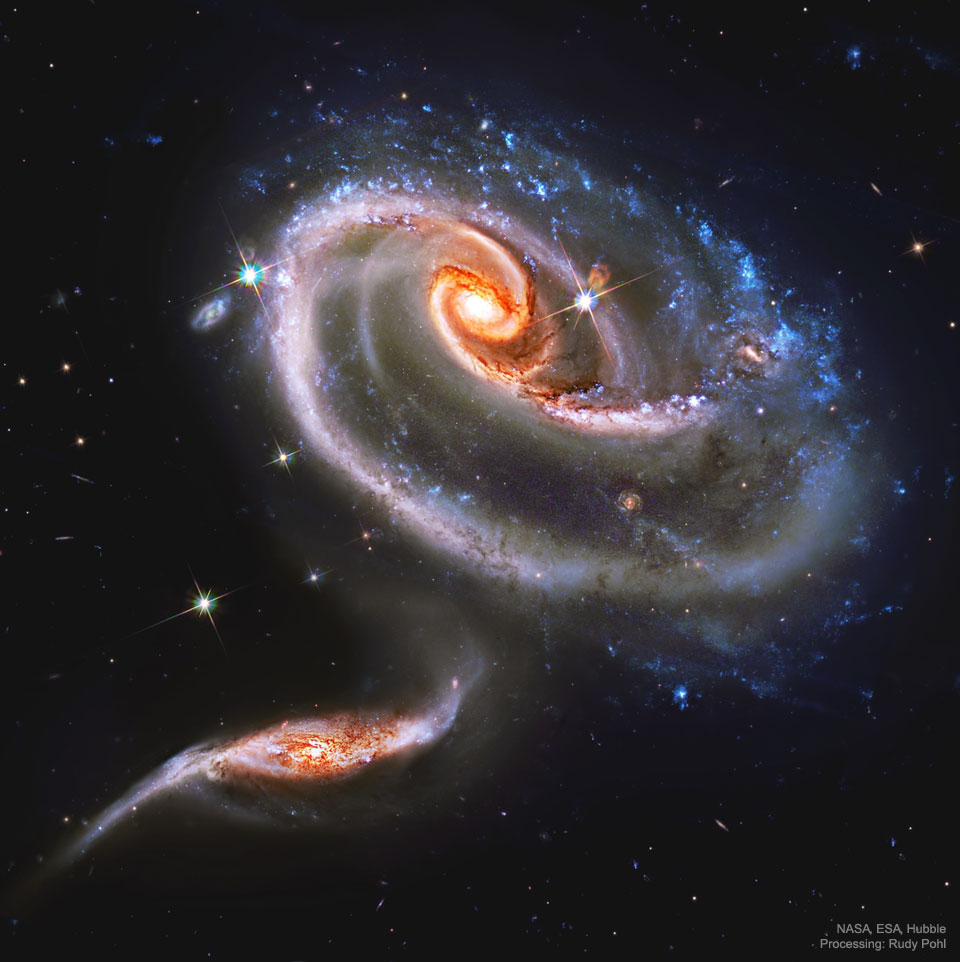 But what happens when two galaxies collide?

There are several physical processes triggered by the interaction and collision of galaxies. The main effects of such interactions are the removal of matter from galaxies and the radical alteration of their shapes. Large galaxies tend to completely absorb smaller galaxies, separating them and incorporating their stars. However, when galaxies are similar in size, like two spiral galaxies, the collision between them will tend to form a giant elliptical galaxy, with no discernible spiral structure.

A curious fact is that although galaxies have billions of stars, as incredible as it sounds, it is very unlikely that the stars of both galaxies actually collide with each other. That’s because the size separating one star from another is hundreds of thousands of times larger than the size of the star itself.

In other words, the empty space between two stars is much larger than their dimension, so that, during the merger of two or more galaxies, the stars simply pass by each other unaltered. For statistical reasons, eventually the stars will also collide, but compared to the number of stars that exist in these systems, that number is negligible.

Furthermore, as galaxies are composed of gas and dust, these mergers can also trigger the formation of new stars, since, as the gas collides, it can be compressed and cool, causing new gravitational collapses of molecular clouds that will act as stellar cribs.

And the Milky Way?

Our galaxy is also a “future dancer” in this spectacle of titans. It is estimated that, approximately 4.5 billion years from now, the Milky Way and Andromeda will collide and merge.

About 2.5 million light-years away from us, measurements of the Doppler shift of the spectral lines of our neighboring galaxy show that Andromeda, in addition to being approaching, is on the course of an inevitable collision.

Over the next billion years, a spectacular series of nearby passages will completely distort the structure of both galaxies until, eventually, the “dance” will end in a final merger, creating an entirely different and new galaxy. 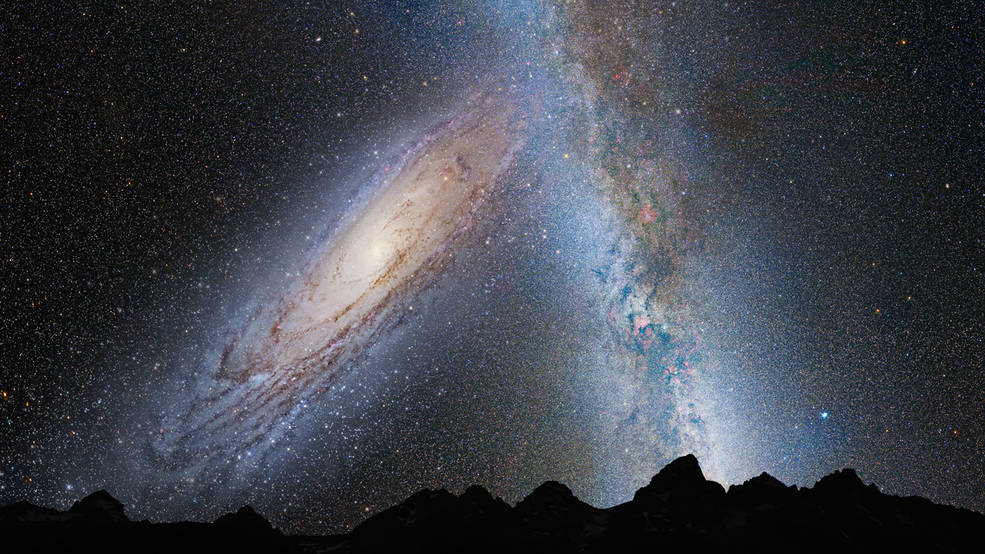 Illustration of what Earth’s night sky will look like in 3.75 billion years from now. Andromeda will be much closer and will have already started to distort the Milky Way.Source:  NASA/ESA