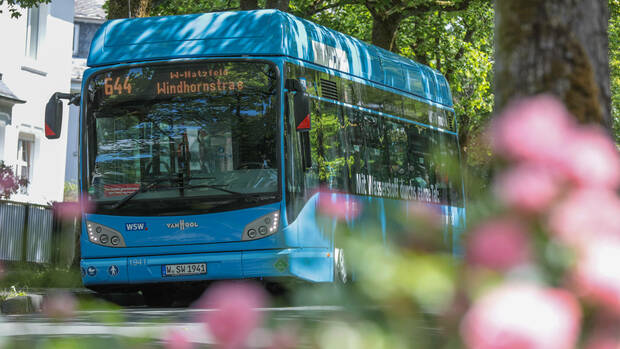 In the 1970s and 1980s, the University of Stuttgart, in cooperation with the German Aerospace Center (DLR), researched technologies for transforming an energy supply based on fossil fuels to the technical use of solar energy.

Professors C.-J. Winter and W. H. Bloss gave birth to the ideas of the solar hydrogen economy. A pilot project for the production of green hydrogen (“Hysolar”) in Saudi Arabia was implemented and the first hydrogen-powered car (BMW, Prof. W. Peschka) was developed.

Around 40 years later, in which the use of “solar” hydrogen has experienced a number of ups and downs, the Federal Government is presenting its “National Hydrogen Strategy” (NWS).

Driven by climate protection goals, decarbonization will be pursued in the next three decades across all energy sectors with clear greenhouse gas reductions. Large quantities of green hydrogen, produced by splitting water in electrolyses, with electricity from renewable energies (“power-to-gas”) are indubitably necessary.

According to the NWS, capacities with a capacity of five gigawatts (GW) are to be created in Germany by 2030 as the target for the construction of hydrogen plants. The massive, parallel expansion of wind and solar power is indispensable for this.

The attitudes of managers in the energy and industrial sectors with high greenhouse gas emissions (steel, cement, chemicals) seem to be changing. There are initial declarations of intent to actively participate in decarbonization. Others do green washing by buying green electricity but not investing in projects and technologies themselves.

“The massive demand for renewable energies in Germany alone shows the great potential.”

Less than four years ago, some of the large energy and industrial groups in Baden-Württemberg could not even be persuaded to take part in the concrete development and implementation of a climate quarter in the west town of Esslingen.

In 2016, planning began for the first climate-neutral urban district with 500 residential units for around 1,500 residents: with the installation of photovoltaic systems, an electrolyser with a capacity of one megawatt (MW) that produces 400 kilograms of green hydrogen per day, a hydrogen and biomethane block-type thermal power station , Electricity storage and a hydrogen filling station.

To implement and finance the project, the start-up “Green Hydrogen Esslingen” was founded without the participation of large, established energy suppliers. “Green hydrogen does not pay off, we will do that from 2040” was the reason for the rejection.

The challenge of implementing the hydrogen project in the city broke new ground in planning. The aim was to supply the district with the waste heat from the electrolysis processes, thereby increasing the degree of utilization from around 60 percent to around 90 percent. The climate quarter in Esslingen is jointly funded by the Federal Ministry of Economics and the Federal Ministry of Research and today serves as a blueprint for some of the upcoming real laboratories.

According to Federal Minister for Economic Affairs Peter Altmaier (CDU), Germany’s NWS aims to become the world market leader in hydrogen technology (electrolysis, fuel cells, hydrogen infrastructure, hydrogen filling and filling stations). An ambitious goal, for which it will be necessary to use “German Engineering” and to support risk-taking and innovative companies.

By 2030, seven billion euros are to be made available for market development for projects in Germany and two billion euros for investments in sunnier countries such as Australia, Chile or in North Africa. It is also intended to increase the research budgets for this area by triple-digit millions annually.

If the EU’s hydrogen strategy envisages investing billions of euros in tax money in “blue”, natural gas-generated hydrogen, it becomes clear that there is still doubt about the transformation process from fossil to renewable energies. Ideas to store carbon dioxide as ice in the deepest parts of the sea have been researched for 30 years. The current proposals to bring it into salt caverns only create further unresolved construction sites.

Climate neutrality for Germany by 2050 is clearly realistic. But the expansion of renewable energies must be an unrestricted priority and the reduction of energy requirements in all sectors (buildings, transport, industry) must be promoted significantly.

In the remaining time, achieving the climate targets with the renovation of buildings is just as unrealistic as the effect of a further tightening of the energy saving laws for the new building sector by 2050. The decisive factors are the CO2 emissions that are released during the construction of buildings and that are difficult until the life cycle cannot be compensated at all.

The transport sector urgently needs green fuel and a rethink in the heads of the corporate heads. Anyone who offers electric vehicles with a curb weight of over 2.5 tons and SUVs with hybrid drives to customers is working against the climate protection goals of the German government.

But how do you formulate the goal? “Almost climate-neutral”, which means a reduction in greenhouse gas emissions by around 80 percent by 2050, as stipulated in the climate protection program of the Federal Government of 2019, or a real zero in the greenhouse gas balance with 100 percent avoidance of climate-damaging emissions, as the EU does with it Going for Green Deal?

Technically and economically, that’s a huge difference. My recommendation for an “almost climate-neutral” economy lies in between and addresses people as a reference. The annual anthropogenic CO2 emissions should be below one ton of carbon dioxide per inhabitant be reduced. In 2019, there were eight times as much per German citizen.

If climate neutrality is to be achieved, almost 100 percent of the electricity must be provided from renewable energy sources. The power plant capacity of renewables, currently around 108 GW, of which 56 GW comes from wind and 52 GW from solar power, will have to increase five-fold by 2050.

Wind turbines (around 250 GW) will then generate around two thirds of the renewable electricity. The expansion of photovoltaics to up to 200 GW will contribute around a quarter to the decarbonization of electricity.

An average annual expansion rate of ten to 14 GW is necessary for wind and photovoltaics. Compared to the installed capacity of just 2.5 GW in 2019, considerable efforts are required to force the expansion.

In Germany, the expansion of the PV and wind power plant capacity to 450 to 500 GW is not a problem of space. There are sufficient roof and open spaces for PV systems. 200 GW of photovoltaics would only cover two percent of the agricultural areas. In contrast, the expansion of wind turbines on land and the construction of new power lines is made extremely difficult due to the lack of acceptance in society, among other things due to nature conservation, noise protection or the landscape.

It is up to the politicians to provide better information here. Against the background that climate neutrality is not available for free, but requires many billions, participation models and operator concepts at the regional level could help to increase acceptance.

Regardless of this, the understanding must prevail that the consequential damages of climate change will be bigger and more expensive than goal-oriented investments in a sustainable supply. According to our estimates, Germany will need 30 to 40 billion euros annually by 2050 in order to achieve the goal of “almost climate neutral”. This corresponds to around ten percent of the federal budget for 2019 or roughly the annual defense budget.

The demand for renewable electricity will increase strongly in the foreseeable future. The proportion of heat pumps in the supply of buildings will increase, e-mobility will prevail, and the industry will switch to green electricity due to the cost situation for the increase in emissions and, if necessary, for image reasons.

All of this additionally requires the accelerated expansion of the PV and wind systems. And now there is the electricity requirement for the production of green hydrogen.

What role does green hydrogen play?

The climate protection goals in Germany and the EU can only be achieved with green hydrogen. It can only be produced using largely decarbonised electricity. In parallel with the expansion of renewables and the associated high installed (peak) performance, volatile electricity surpluses will increase significantly in the coming decades.

The conversion of the oversupply by means of electrolysis to green hydrogen according to the principle of power-to-gas thus becomes a key technology of the energy transition. In my opinion, the hydrogen should be produced close to the need.

Producing hydrogen in the sun-rich arid regions requires large amounts of water, the transport of hydrogen and geopolitical dependency. The ideas of transporting solar power to Europe via a high-voltage direct current transmission network and using it to produce hydrogen for industry and transport seem to me to be more sensible.

The waste heat generated during electrolysis – around 30 percent of the electricity used – could then be used to supply heat in Europe. This increases efficiency to almost 90 percent.

Almost all sectors (industry, transport, buildings) can be decarbonized with green hydrogen. Hydrogen can be converted into synthetic methane (methanation) and fed into natural gas networks in large quantities.

At the same time, methane, with its four times higher energy density than diesel, can be used as a fuel for transportation in the context of “far and heavy”.

In contrast to electrons in a battery, hydrogen molecules can be stored without loss. One more reason to use green hydrogen for long-term storage and thus to bridge the feared “dark doldrums”, for example.

The cost of green hydrogen depends primarily on the cost of electricity and less on the investment costs of the electrolysis plants. Green hydrogen will be producible for two to three euros per kilogram in the next few years.

Industrial production in the GW sector will reduce the plant costs by around two thirds to specific investments of around 500 euros per kilowatt. The (economic) breakthrough of the NWS could also be decisively accelerated if electricity from renewable energies were exempted from the high levies from the EEG and the network charges

Implementing changes in energy technology takes time, with solar hydrogen almost half a century. It is commendable that the Federal Government is opting for green hydrogen despite the hesitant stance of the corporations, and the goal of becoming the top of the Champions League in this area is ambitious. Japan, Korea and China have long been playing there for the title of “market leader”.

If you had taken the visionaries in Stuttgart 40 years ago seriously, you wouldn’t have to run after fuel cells and battery-electric vehicles today. It remains to be seen whether the chase with the billions will succeed.

We need companies in Germany that are able to set up production facilities for electrolysis and fuel cells in the single-digit GW range every year in order to supply the domestic and European market.

We also urgently need a European photovoltaic and wind industry. German institutes are already at the forefront of research and are constantly reporting new world records for the efficiency of PV cells.

The massive demand for renewable energies in Germany alone shows the great potential. Extrapolated to Europe, it becomes clear that the added value should take place here and not in Asia. High productivity and performance should make it possible to produce PV modules more cheaply on site than to import them from Asia via the long and expensive transport route.

As a protagonist for the technical use of solar energy, the question has been asked to me for 40 years: “Does it pay off?” It remains to be hoped that the refusal to hold the executive floors of the energy industry and industry has changed in the past decades and that the managers have become overambitious and develop committed makers of the energy transition. The chances are there.

More: Savior or illusion? The potential of hydrogen in the fact check