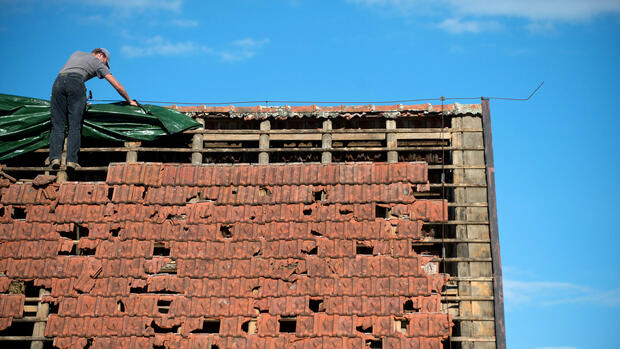 Berlin Hailstorms with large hailstones can cause extreme damage, especially if they hit metropolitan areas. Such severe hailstorms will increase significantly in Europe in the long term if climate change is not contained.

This is the conclusion of a still unpublished study by reinsurer Munich Re in collaboration with the European Severe Storms Laboratory (ESSL), a storm research organization founded in Germany in 2006.

Hail events with grains larger than two centimeters in size will increase by ten to 20 percent in Europe even in the moderate scenario. If global warming continues unchecked, i.e. in the second scenario, an increase of up to 80 percent can be expected, especially in Italy, parts of Germany and Eastern Europe.

Although two centimeters thick hailstones do not yet cause severe damage to buildings, they can partially or completely destroy crops regionally. A first study by Munich Re and ESSL in 2018 had already shown that there is much more hail in Germany in the south than in the north.

Hailstorms with grains of more than five centimeters will increase by 30 to 40 percent in almost all of Europe in the temperate scenario by the end of the century. Even stronger in parts of Italy, on the eastern Adriatic coast and in southern France.

In the second scenario, these severe storms with hail damage will occur in large parts of Central and Eastern Europe as well as in Italy, parts of southern France and the Adriatic coast about twice as often as before. Hailstones of two to four centimeters in size are enough to smash cars.

“Hailstorms often only occur locally, but they can still cause damage in the billions,” says Eberhard Faust, an expert on climate risks and natural hazards at Munich Re. Climate change will cause higher damage in Europe on average. “It is all the more important to take precautions, for example through the increased use of hail-resistant building materials and elements.”

Hailstones with a diameter of two centimeters or more mean that the damage potential increases significantly, especially in modern, often sensitive building facades and insulation systems. According to Faust, therefore, partial automation of hail protection on commercial and industrial buildings is also conceivable. External blinds are raised in the event of a hail storm by means of a control signal sent centrally by the weather service.

Hail damage in the billions

This is also already practiced in Switzerland. “In this country, it could become an increasingly sensible measure in the future.” Even solar systems often cannot withstand hailstorms.

Hailstones are made of ice and can reach speeds of between 50 and 140 kilometers per hour, according to the Munich Re subsidiary Ergo. In Germany, the largest hailstone in Baden-Württemberg in 2013 measured 14 centimeters with a weight of 360 grams. It came down at a speed of 170 kilometers per hour.

The hailstorms in summer 2013 are considered the most expensive hailstorm in history. The damage went into the billions. The total damage to residential buildings, household goods and businesses was 2.9 billion euros. The hail summer of 2013 left vehicle damage in the amount of 1.7 billion euros.

Household insurance is responsible for damage to furniture if a hailstorm damages windows or the roof and rainwater enters the building, and partial and comprehensive insurance for hail damage to the car.

More: More heat deaths, heavy rain and drought: This is how the Germans are feeling the effects of climate change.